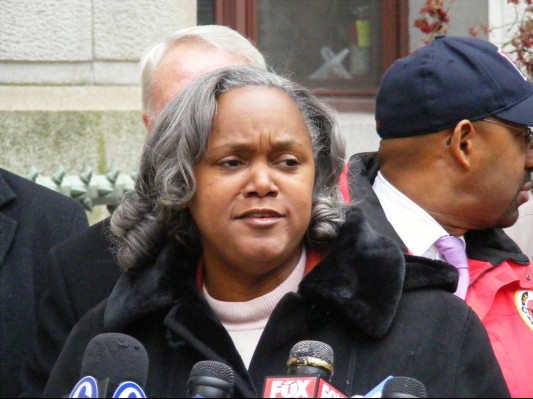 This is a fascinating turn of events on a number of levels.

The PPA board is nearly all white and nearly all male, so bringing on an African-American woman to manage the Authority is a meaningful--and awkward!--step toward greater diversity and culture change at the organization.

Republican officials don't even attempt to disguise their political motives in choosing Tolson, however.

Picking Tolson, a Democrat, is seen as a strategic way to reduce public criticism of the Republican-controlled state agency, according to the source with knowledge of the board's deliberations.

So Tolson's appointment serves a political interest in making it harder to return the PPA to local control or abolish it. Probably the best message that would-be PPA reformers have currently is that it's an unaccountable Republican patronage den in a Democratic city. Hiring someone who local Democratic electeds really like working with undermines the case for radical PPA reforms with the very people who would need to be the biggest advocates for this.

Lest anyone mistake this move for pure tokenism though, Tolson is a highly-qualified choice with an interesting career trajectory, and former colleagues who we spoke with on background today all say the role would play to her strengths.

She's served in City government for over 30 years, working her way up within the Streets Department and eventually leading that department from 2002 to 2013. Michael Nutter appointed her to run the Revenue Department from 2013 to 2015, and then Jim Kenney chose her to be Deputy Mayor for Transportation and Infrastructure, where she's served since the beginning of 2016.

This isn't exactly the profile of a policy change agent, and Tolson has a reputation for being somewhat allergic to working with outside advocacy groups. Google her name, and you can find stories about her bad blood with recycling advocates, a high-profile disagreement with former Chief Data Officer Mark Headd over releasing delinquent property tax records, and some vague grousing about her lack of transportation reformer credentials among advocates who are impatient with OTIS.

One source we spoke with today who occasionally clashed with Tolson during the Nutter years said, however, that they thought the Parking Authority job was well-suited to her skill set and professional strengths as someone who has managed large city departments.

Perhaps most interestingly, this creates an opening for the city's top transportation post at the Office of Transportation and Infrastructure--one of the most important positions in local government.

Recently there have been several staffing shake-ups that could potentially result in an unintended sea change in the Kenney administration's approach to land use and transportation issues. Streets Commissioner Donald Carlton was recently demoted after it was revealed he punched a guy in the face at a holiday party last year, and Mike Carroll, a favorite of planner types, has been serving as acting Commissioner. There are rumors that he's been asked to stay in that position.

Jim Moylan, Johnny Doc's chiropractor and president of Pennsport Civic Association, was asked to resign as head of the Zoning Board of Adjustment after it was reported he was investigated as part of the FBI's Doc probe, and Philadelphia 3.0 is actively trying to draft a zoning reformer to fill that position (more news soon.)

The city is also preparing to announce the name of the new Complete Streets Director, who we've heard is not a local hire.

If the Kenney administration appoints reform candidates to the ZBA and OTIS, in addition to these other positions, we could potentially be looking at a much different policy environment for land use and transportation issues than the one Kenney created when he came into office.