City Council passed an important piece of legislation at the end of their Spring session that didn't get much media attention, but has the potential to be a really big deal if Councilmembers decide to use it as intended.

That bill made changes to the Transit-Oriented Development (TOD) provisions in the zoning code, which is an overlay that increases allowable density and housing units and lowers parking requirements (among other changes) within 500 feet of transit stations that Councilmembers choose.

While Philly has had TOD language in the code for years, the bill's authors at the Planning Commission think the simplified terms will make it more likely Council will actually use it.

We called this City Council's best idea yet when we first wrote about the bill earlier this year, because it's literally a cost-free way to do targeted economic development without increasing taxes, support transit ridership and reduce congestion, and create more transit-accessible housing. Now that the bill is law, the next step is for Councilmembers to assign the TOD overlays to specific transit stations.

Which stations should they pick? Helpfully, the Delaware Valley Regional Planning Commission released a short report on this back in March that analyzed the suitability of all the train stations in the region, and made some recommendations for stations to prioritize.

The report's authors scored all the stations based on their "TOD Potential" and "TOD Orientation," and determined the places where transit-oriented zoning would likely yield the best results: 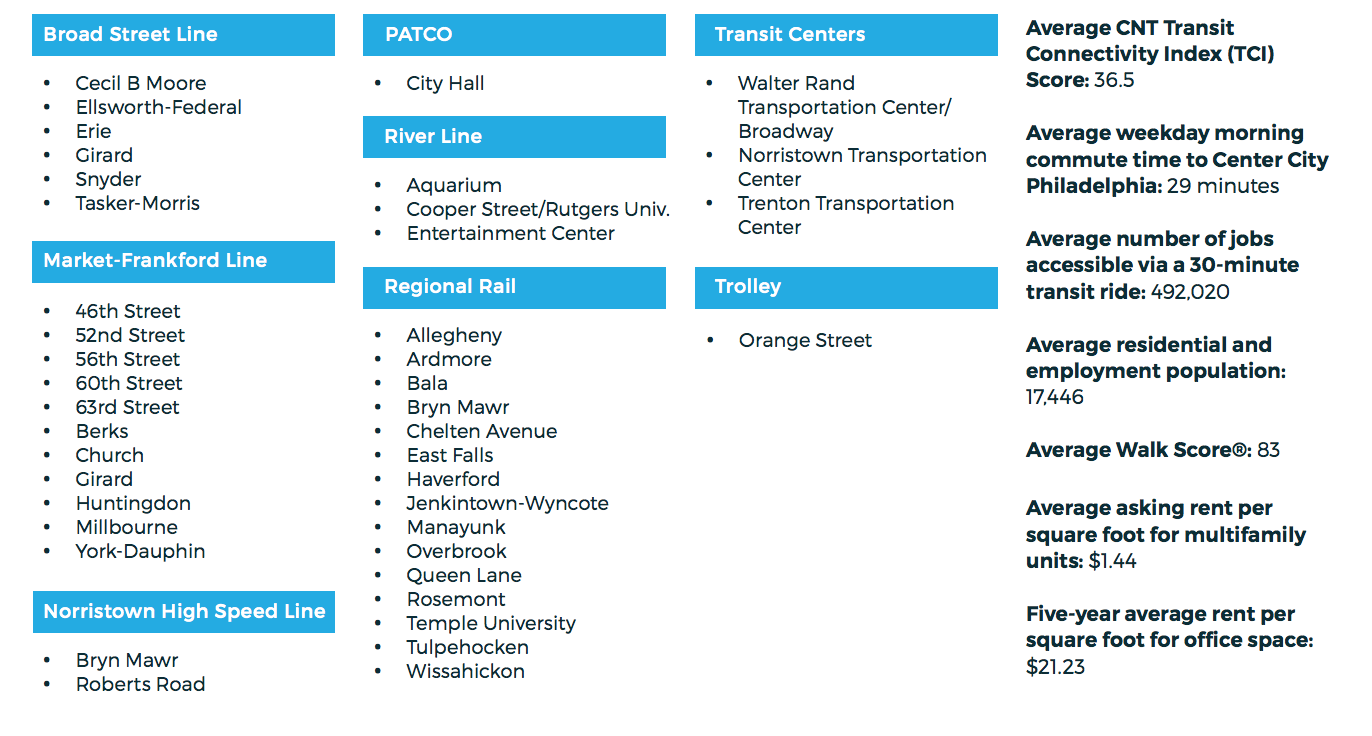 About 35% of those priority locations are within the city of Philadelphia, but there were also a lot of regional rail stations in the surrounding counties that scored highly. Broken down by transit type, regional rail was the system with the greatest share of high-scoring stations, followed by the Market-Frankford Line, the Broad Street Line, and the River Line.

Of this list, the bulk of the station overlays within city limits would need to be approved by Councilmembers Jannie Blackwell, Maria Quiñones-Sánchez, Mark Squilla, Kenyatta Johnson, and Darrell Clarke, with a smaller smattering of stations in a handful of other districts.

Whether Councilmembers will ultimately take advantage of this opportunity is a question for the fall legislative session, but already we're hearing some interest from civic groups and business associations looking at volunteering specific stations.

The spark will likely need to happen first at the civic association level if Council is to move on it, so anyone looking to suggest stations to Council should try starting the conversation with their local RCO boards first.

UPDATE: The report's author, Andrew Svekla, posted the following comment on the UrbanPHL Facebook group, shedding some light on why certain stations that seem perfect for TOD overlays were left off the list. Subway stations right in Center City were left off because they were considered too obvious to warrant a mention, not because they're bad candidates. The full comment is below:

"As you can imagine, rating TOD opportunities across a rail network like ours is a tall order. I wanted to share a few notes about our methodology.

One of the first steps we took was removing rail stations from Greater Center City from consideration. This obviously includes a number of high-profile stations that would have scored very well. We believe the TOD potential of these stations has already been well established. Our focus was identifying TOD opportunities beyond center city. To do so we analyzed 12 demographic, physical, and market conditions that can influence an individual station area’s readiness for TOD. We divided these characteristics into 2 categories. TOD Orientation, which includes factors like transit service quality, job access, walkability, population + employment, is intended to describe how supportive the existing conditions within a station area are of the land use and travel patterns typically associated with TOD. The second category, TOD Potential, looks at factors that attempt to capture a blend of the real estate market conditions and political context that are suggestive of future development opportunities.

Working at a regional level, we needed to identify characteristics and data sources that could be used across our 9-county region and across a diverse transit system (so we left out some things like base zoning which varies wildly across all these different municipalities) . The list of station areas included in the article above represents the stations that received the highest ratings in both categories. Depending on your perspective as a municipal official, developer, or transit agency, your interpretation of these ratings could vary significantly. However, we think these stations likely represent some of the greatest opportunities for TOD in the region.

The data itself is probably best explored through a companion webmap we put together: http://www.dvrpc.org/webmaps/TOD/
It is our hope that these ratings, along with a variety of other inputs, can help guide public and private investment at rail stations in the city and around the region.