A new initiative from Council President Darrell Clarke suggests the recent (and not-so-recent) frustration expressed by the business community has generated some attention in City Council.

On Thursday, Council President Clarke introduced a resolution, co-signed by thirteen of his colleagues, to do some spring cleaning of the 65+ year old Philadelphia Code and the City’s departmental regulations.

Specifically, Clarke introduced a resolution (#170179) calling for the creation of a “Special Committee on Regulatory Review and Reform” that will inventory anachronistic, confusing, and unnecessary provisions in the City’s Code and departmental regulations, with the goal of making City processes more efficient. Ideally, the Special Committee would result in some sort of omnibus bill removing all of the above from the City Code, and a regulations overhaul designed to streamline license and permitting workflows.

This legislation seems to be a response to the Chamber’s (delayed) criticism of Bill Greenlee’s wage disclosure bill; Equus Capital’s announcement that it was leaving for the burbs; and the general sense that doing everything in Philadelphia is more complicated, time-consuming, and expensive than it is anywhere else.

On paper, this all sounds great. However, to be more than a decluttering effort, all parties in City Hall must commit to meaningful changes in the way the City treats prospective and current Philadelphia businesses.

Let’s take a look at the two things the special committee is going to assess:

The evaluation of the Code is a doable task, and it’s easy enough to identify the stuff that doesn’t belong there in 2017. But it seems highly unlikely that Council will address the core issues that some business find challenging, such as the specific provisions of paid sick leave, the prohibitions on asking about criminal background or wage history, and our broken tax code.

That's unfortunate, because a year into paid sick leave might be the right time to see, for example, if the legislation should be amended to include the three core recommendations offered by business task force that Council ignored: requiring that leave is taken in four hour increments, increasing the threshold of eligible businesses from 10 to 15 employees, and exempting part-time employees who work less than 15 hrs/week.

Are these recommendations still as valuable for restaurants and retail as they seemed before the law went into effect? Who knows! Council never really circles back once a controversial law is passed. And it's hard to make claims about wanting to be "business-friendly" without engaging in these kinds of check-ins with your constituents.

Although the Code desperately needs the KonMari treatment, businesses aren’t really being jammed up because L+I is still on the books as overseeing fishing licenses (§ 2-111), minors can’t buy pagers (§ 9-621), and curb markets can only sell produce, “frankfurter sandwiches” and shoes (§ 9-201). These are easy fixes, but the real action is in the departmental regulations.

Resolving the departmental regulations portion of this problem in a holistic way—that is, in a way that accounts for the fact that businesses navigate across departments in a multitude of workflows—could be transformative, but it's going to require a meaningful investment of time, resources, and political capital.

Think about it like this: The City will be engaging in an analysis of its regulations without being able to map out all required license/permitting processes (aka, how regulations are implemented), without an inventory of every form businesses are required to remit, and without an adequate way of comparing our regulations to those in other municipalities.

For example, at present it’s not clear that anyone wants to commit to the exact process—including the timeline—that a new restaurant must navigate before opening its doors. I think it’s this (below), but one can't be sure! And this flowchart notably excludes anything having to do with zoning, and thar be dragons. 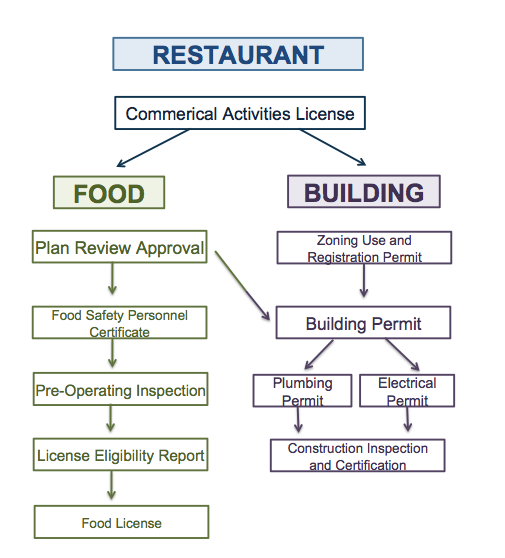 If the City is serious about rerouting the Rube Goldberg device that is starting and running a business in Philly—and it absolutely should be—it must map out the 25 (50?) (100?) most common business processes from start to finish, and commit to meaningfully decreasing friction across those workflows.

Imagine if the City hired IDEO to fix this? They overhauled Boston's website. Why can’t us!