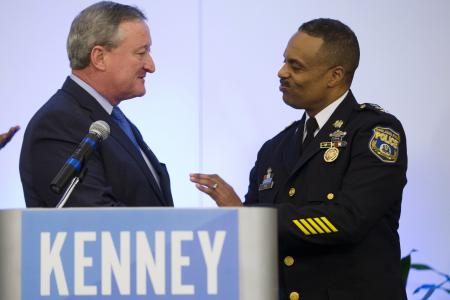 Philadelphia voters just participated in a District Attorney primary that featured an unusually substantive policy debate about how best to reform the city's approach to criminal justice.

With the entrance of defense attorney Larry Krasner into the race, and a rumored SuperPAC spend looming in the background, the contest quickly became a race to left, with candidates competing to prove their justice reform bona fides.

One of the big issues in the primary was about police accountability, and what kind of appetite the District Attorney would have for prosecuting police officers accused of breaking the law. That makes sense: This was the first election cycle after we found out there would be no criminal charges for any of the officers at the center of the "Tainted Justice" exposé that earned Daily News reporters Barbara Laker and Wendy Ruderman a Pulitzer Prize.

Six PPD narcotics officers were caught stealing half a million dollars from suspects, and not only did they ultimately not get in any trouble, they got a bunch of back pay, and one of the guys is even back on the beat making drug arrests again.

That's just the most high-profile example, but it's far from the only recent instance where police officers were accused of abusing their authority and faced no consequences. It always comes back to the disciplinary clauses in the police union contract, which is renegotiated every 4 years.

The most sensitive time for [Fraternal Order of Police head John] McNesby — the moment when he proves his mettle to his membership — is actually right now, right at this moment, when nobody, not even the newspapers, are saying anything. (Ed. Note: We have to give Kevin Harden just a wee bit of credit here.)

Negotiations began last week. On Tuesday, the topic in the labor talks is police pensions, I’m told. Once pay and pensions have been negotiated, the city will ink a new deal with the force. There will be absolutely zero public input in this process.

If you’re wondering how police officers were able to win the right to move out of the city, this is precisely how that happened. They made a deal when no one was looking.

For those looking to learn more about the issues involved, check out Kenneth Lipp and Dustin Slaughter's 2015 post on the conflicts between the existing police contract and the Obama DOJ's recommendations for reforms at PPD. PPD has been implementing many of the reforms in good faith, but in key places, the current contract is an obstacle.

But several components considered crucial to reform by members of the oversight community seem to have hit an impasse at prohibitive terms of the collective bargaining agreement between the City and FOP Lodge 5.

One stymied reform would have involved streamlining the OIS review process by combining the Uniform Firearm Review Board (UFRB) and Police Board of Inquiry (PBI) into one integrated board. The Justice Department’s review found that an “integrated board would eliminate the inherent conflict in the two-board system, and allow the department to speak with one voice in terms of officer misconduct and accountability.”

Two other, though no less crucial, proposed reforms involve interviewing and videotaping officers involved in shootings within 72 hours of an incident. The review concluded that because “many departments afford officers anywhere from one to three sleep cycles,” the Philadelphia Police Department “should no longer wait for the completion of a criminal investigation or the declination of charges by the [District Attorney’s Office].” Further, the review urged department shooting teams to “interview officers as soon as all other interviews have been completed but not longer than 72 hours after an OIS.”

It only gets more complicated from there, but we want to boost the signal on the issue in hopes of tempting more reporters onto this important story. Larry Krasner's primary win shows the voters want to see some justice reform, and Jim Kenney has long endorsed the 'Black Lives Matter' message, at least on a rhetorical level.

Under the state law governing arbitration for public safety unions, Kenney actually has a lot of leverage over the outcome because he ultimately has to sign the contract in the end.

Does he think the contract strikes the right balance on police accountability? Would he sign a contract that doesn't resolve the conflicts with the DOJ recommendations? Are they going in seeking any kind of pro-accountability changes? From Ryan Briggs's report this morning, it sounds like the administration doesn't want to rock the boat.

It would be awfully disappointing to have run an election all about justice reform, only to miss the opportunity to enact the police contract reform piece of that agenda for another 4 years.