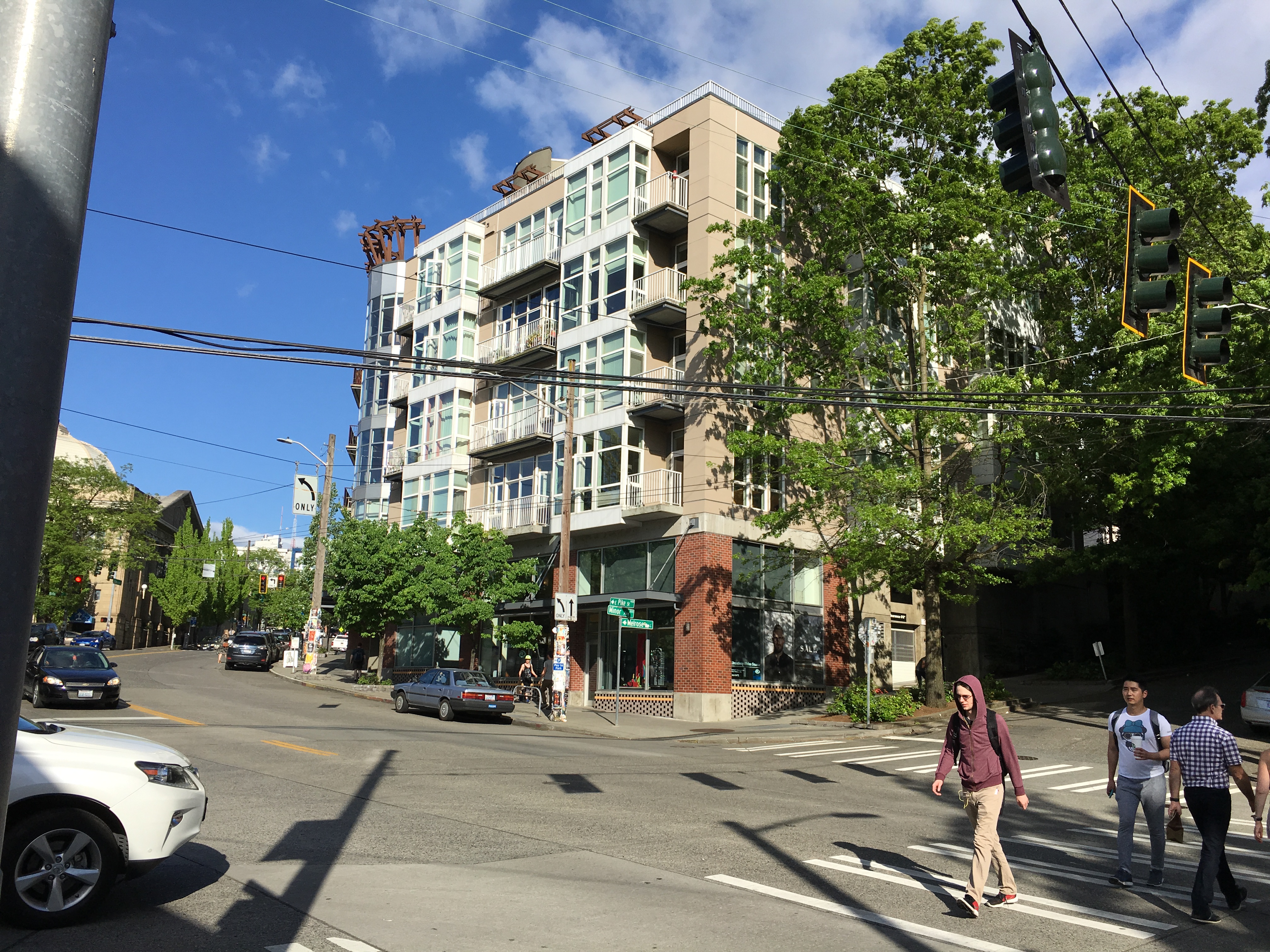 The main thing to know about the original bill was that it created a mandate for builders to provide affordable housing in developments over 10 units, at a rate of one in ten—a practice most commonly known as inclusionary zoning, or IZ for short.

The affordable units would be paid for with density bonuses, which allow developers to build taller or add more units than the base zoning in exchange for providing some type of public good, essentially creating new buildable space out of thin air. Loosening zoning restrictions creates value, and the value in this case would be used to pay for the affordable units. So the heart of the bill is a trade-off with more affordability for more density.

This is a perfectly reasonable political proposition. Everybody agrees to have some taller buildings on the main drag in the neighborhood, for the cause of getting some more affordable units and less segregation. And the new zoned capacity for the bonuses costs taxpayers nothing to create, since all we'd be doing is loosening some of our zoning rules.

Unfortunately, the basic logic of the bill was tossed out in the amended version, and with it, the actual revenue source for the new affordable units: the density bonuses.

Developers don't like the inclusionary mandate, and prefer the more predictable option of paying into a fund, but for those who primarily like the idea of inclusionary zoning as a way to fight socioeconomically segregated neighborhoods, a simple payment into the Housing Trust Fund—which funds construction of affordable units and other strategies on other sites—doesn't cut it.

The amended bill also greatly scaled back how many city neighborhoods would benefit from the bill. The last two years of zoning remappings will have shifted the exact numbers around a bit, but according to the Planning Commission's 2015 numbers, all the impacted zoning categories in the original Mixed Income Housing bill add up to only 17.6% of Philly's land area (excluding parks, waterways, streets, etc.)

Some people who don't like this bill—on both the homeowner side and the real estate industry side—don't like it because they don't support the cause of socioeconomically integrated neighborhoods.

Everything else can be negotiated into a workable place. For those developers who do support the political goal of integrated neighborhoods, the biggest problem with the initial Mixed Income Housing bill was that the numbers Council initially chose for the density bonuses were insufficient to pay for the affordable units, and the Area Median Income (AMI) numbers used to set the income eligibility restrictions were set too low.

But the building industry has also crunched the numbers on density bonuses and AMI levels that would be sufficient, and there are actually scenarios where the bonuses increase profit margins, even with the affordability mandate. Here is a chart showing how this can work (full spreadsheet here): 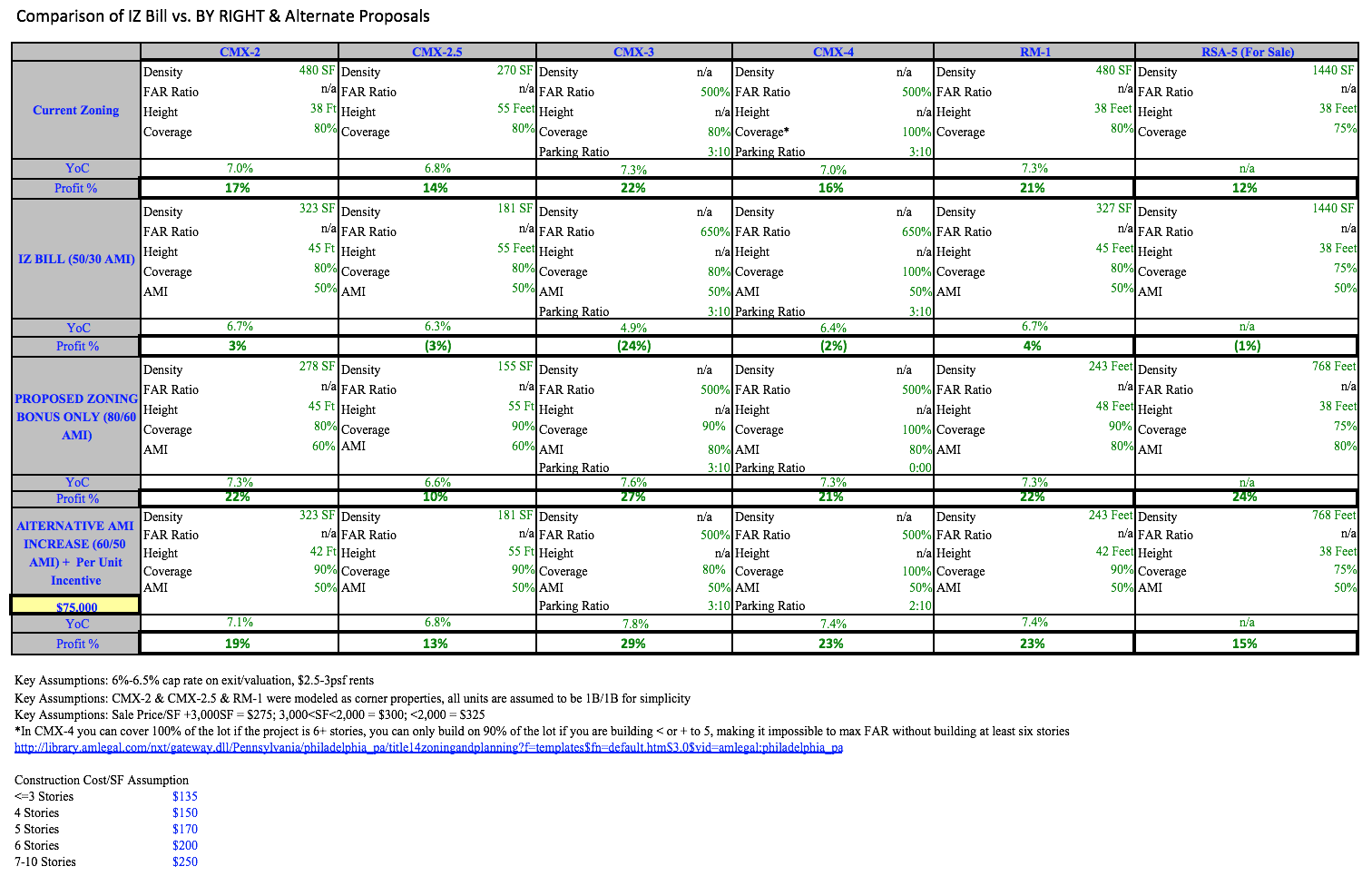 For the zoning laypeople, CMX-2 is a typical 38' three-story apartment building with ground floor retail, CMX-3 and 4 are also mixed-use but larger mid-rise buildings; RM-1 is a 38' apartment building, and RSA-5 is a 38' rowhouse. BIA's numbers show that by slightly increasing height to 45' from 38', increasing lot coverage, eliminating parking minimums, and slightly increasing the income requirement, this can work.

A win-win is possible, where the density bonuses fully fund the new affordable units, with no tax increase on developers or city taxpayers required. The trade-off is moderate increases in density in neighborhoods that have these zoning categories—greater Center City and surrounding high-density rowhome neighborhoods in South Philly and the Riverwards.

At Monday's hearing, BIA representatives testified that they did present these bonus scenarios to City Council already and were rebuffed by Councilmembers who didn't want to take the density-for-affordability trade-off. Jake Blumgart at PlanPhilly writes:

"I think if the city had an effective, broad based program with sufficient bonuses to offset the costs, that is something that I would consider," said Dranoff.

BIA President Brian Emmons and Treasurer Leo Addimando testified jointly that they had pushed for more generous zoning bonuses in neighborhoods outside the Center City core. This would allow them to build more units, both affordably restricted and market rate, in high value areas, which would help constrain gentrification.

But the neighborhood groups, the BIA representatives testified, squashed their proposal. For their part, civic associations testified that they were apprehensive about the effect the bill’s zoning bonuses — which would allow for larger buildings with more units and less parking —  would have on their neighborhoods.

Many civic associations would not be happy with this trade-off under any circumstances, but many of the more progressive associations could likely become supportive if certain changes were made.

Many civics don't like that you can stack bonuses like the green roof bonus and the fresh grocery bonus on top of the affordable housing bonus, and potentially build a 70-foot-tall building by-right in a CMX-2 zone. They also don't like that the bill would essentially invalidate hard-won zoning overlays, most notably the Central Delaware Overlay that guides waterfront development on the Delaware, and has its own system of zoning bonuses.

This is a job for the Legal Department, but figuring out how to discourage bonus-stacking, and removing the 70' by-right bogeyman from the conversation, would probably go a long way toward peeling off more progressive civics into the supporter column.

If Council is really intent on passing an inclusionary zoning bill, they need to scrap the amended version and restore the basic political logic of the original bill, except with workable density bonuses.