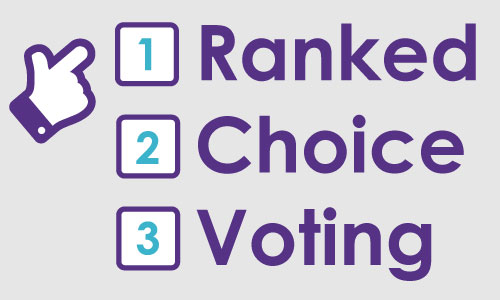 Without wading into that debate, it's worth pointing out that this concept of "spoiling" is unique to our First-Past-the-Post voting system, and there are other voting systems that elide this whole business of strategic voting by allowing people to rank their favorite candidates instead of casting just one vote for a single politician.

There are several different flavors of ranked choice voting systems, but the general idea is that voters get to rank candidates instead of choosing only one, and the election winner has to receive a majority of the votes. Here's a simple 1-minute video explaining how it works:

There are multiple benefits associated with this type of voting system, including assurance of majority support for the winner, more room for a greater diversity of political perspectives, and less negative campaigning (since candidates want lots of second-choice votes as well as first-choice votes.)

After Maine voters adopted ranked choice voting in 2016, there's been some more interest in this idea, and The Philadelphia Citizen reports that there are nascent advocacy efforts to adopt it in Philadelphia and also statewide in Pennsylvania. We've even heard there's some interest in exploring this on City Council.

The elections that would become particularly interesting if Philly were to go this route would be the At-Large City Council races and the judicial elections.

In first-past-the-post elections with multiple winners and lots of candidates, it doesn't really make sense to choose five candidates, or whatever is the maximum number you're allowed to pick. As Matt Ruben explained in a Citified post about strategic voting in At-Large Council races, not only should you not vote for the maximum allowed number of candidates, you also shouldn't vote for any incumbents, even if you like them.

"[I]t’s not enough simply to cast your vote for your favorite challenger," Ruben wrote, "You have to give them one more vote than the incumbents. Without that differential, all you’re doing is reducing the challenger’s margin of defeat."

This is completely true, but it's also not a good way to choose our elected officials, and it's also not even clear how effective it is.  Ranked choice voting would do a better job of aggregating voters' preferences, with the candidates attracting the most first and second-choice votes rising to the top of the pile.

Most fascinating of all would be the impact on the two At-Large Council seats that are reserved for non-majority candidates. The City Charter says that the majority party on Council can only nominate five At-Large Councilmembers, leaving two for someone else. As Republicans are the second-largest political party in the city, they've historically taken those two seats.

This year, independent candidate Andrew Stober and Green Party candidate Kristin Combs ran for those seats and lost, but there's been growing interest in trying it again, particularly since the left-leaning Working Families Party has found some success taking advantage of these kinds of guaranteed minority seat rules to make inroads in Democratic cities.

Ranked choice voting would significantly lower the barrier for an independent candidate who can win lots of first-choice votes from an impassioned subset of the electorate to compete for one or both of these seats.