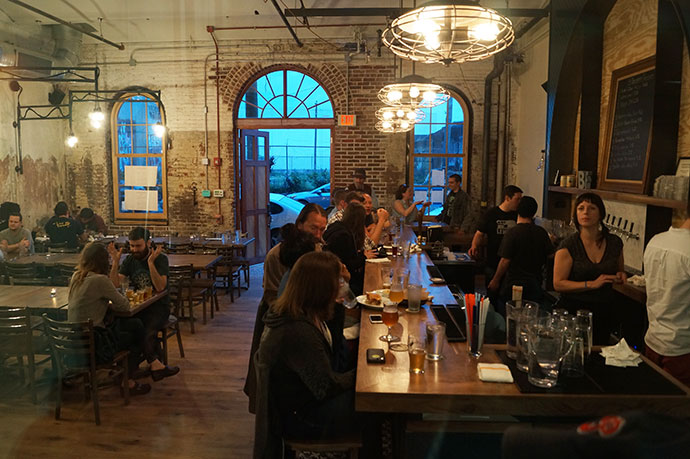 And unless they take action to fix it soon, they're going to choke off the vitality of downtown restaurant scenes all across the Commonwealth.

Act 39, passed in 2016, made numerous changes to the liquor code with the aim of creating more opportunities for supermarkets, gas stations, and brewpubs to sell alcohol. It built on a 2011 Supreme Court decision that allowed supermarkets and gas stations to sell takeout beer if they had cafe seating areas and separate check-out counters for beer sales, which is all that's required for them to qualify as "cafes."

The good news is that it created more options for what license-holders could sell, which consumers are lauding as some of their local supermarkets have begun stocking beer and wine.

The bad news--which totally swamps the good news--is that because supermarkets and gas stations are now in direct competition with restaurants and bars for a capped supply of liquor licenses, the state legislature has turned the liquor license market into the Hunger Games. Pennsylvania has a "county quota" system where the number of liquor licenses is capped by population--one per 3,000 people in each county. This wasn't a sufficient number before Act 39, and it's totally untenable now.

State lawmakers understood that the changes under Act 39 would greatly increase demand for liquor licenses since expanding sales options for incumbent R license-holders would make liquor licenses more valuable. So one of the things lawmakers did in the bill was create a process for reviving about 1,200 "zombie" liquor licenses, which had been removed from circulation.

The Liquor Control Board decided to only auction off small batches of licenses at a time, so as to avoid depressing the prices of existing liquor licenses too much. The results, while unsurprising, were alarming.

Of the 37 R licenses auctioned since October of 2016, 31 were purchased by supermarkets or gas stations, and the prices they paid were astronomical. Sheetz was the highest bidder on 15 licenses across the state, while Giant Food Stores won 11, and Turkey Hill and Giant Eagle each bought two.

And Philly at least benefits from having much higher population density (the ultimate hack to the county quota system) than the rest of the state. In Lancaster County, Giant supermarkets dropped over a half a million dollars on an R license--a record high for the Commonwealth.

Again, the significance here is that deep-pocketed national grocery chains and gas stations are now bidding for the same R licenses as the person trying to open a small gastropub or wine bar in your neighborhood.

Even if the full batch of 1,200 zombie licenses were dropped onto the market at once, it's not clear how much this would bring license prices back down to Earth. Every single supermarket and gas station in the state is going to want to buy an R license at some point, and there's little reason to believe they won't keep dominating these auctions every time a license goes up for sale. And the number of licenses going to auction within each county is rarely going to be very large, because the licenses aren't allowed to be sold across county lines.

A liquor license attorney told the Allentown Morning Call back in January that he expects to see convenience stores continue bidding up license prices aggressively for another two years.

"Zeller expects to see about two years of increased liquor license prices as convenience stores and grocers fight to get licenses and catch up to competitors. Then, he said, prices could start to relax.

"The convenience stores seem to be really coming in with aggressive bids," Zeller said. "Certainly, if there's a local restaurateur, they might bid higher, but generally you don't see that from the local small businesses."

The trend lines are clear: unless the state legislature acts--perhaps by creating an entirely new class of liquor licenses just for grocery and convenience stores to take them out of competition with restaurants and bars--the cost of an R license is likely to continue doubling or tripling each year, and  strangling one of the most important, and fast-growing sectors of Philadelphia's economy in the process.

If there's one silver lining in the law, it's the changes to brewpub rules. Breweries are now able to sell beer in taprooms on their premises, and they don't need to buy a crazy-expensive R license to do it. They can just serve beer as a matter of right.

Even better, only 50% of their taps need to serve the beer that they produce. The rest can be another company's beer. Brewpubs are also now able to sell Pennsylvania-made wine, which typically is not great wine, but it is something.

And on top of that, they're also able to obtain two additional "storage licenses" under which they're allowed to store and sell beer at other locations, which could even be restaurants. Philadelphia's Second District Brewing, for example, is using their storage license for a restaurant in Pottstown. So that's basically three possible bars per brewer, at a cost of zero R licenses.

There are some rumblings that several national craft brewers are now looking to open brewpubs in Pennsylvania due to our uncharacteristically liberal new beer law, which is great news, but it's unlikely to come close to counterbalancing the insane liquor license inflation that's threatening to freeze first-time entrepreneurs out of the restaurant business.