University City is Easily the Best Location for Amazon (in Philadelphia) 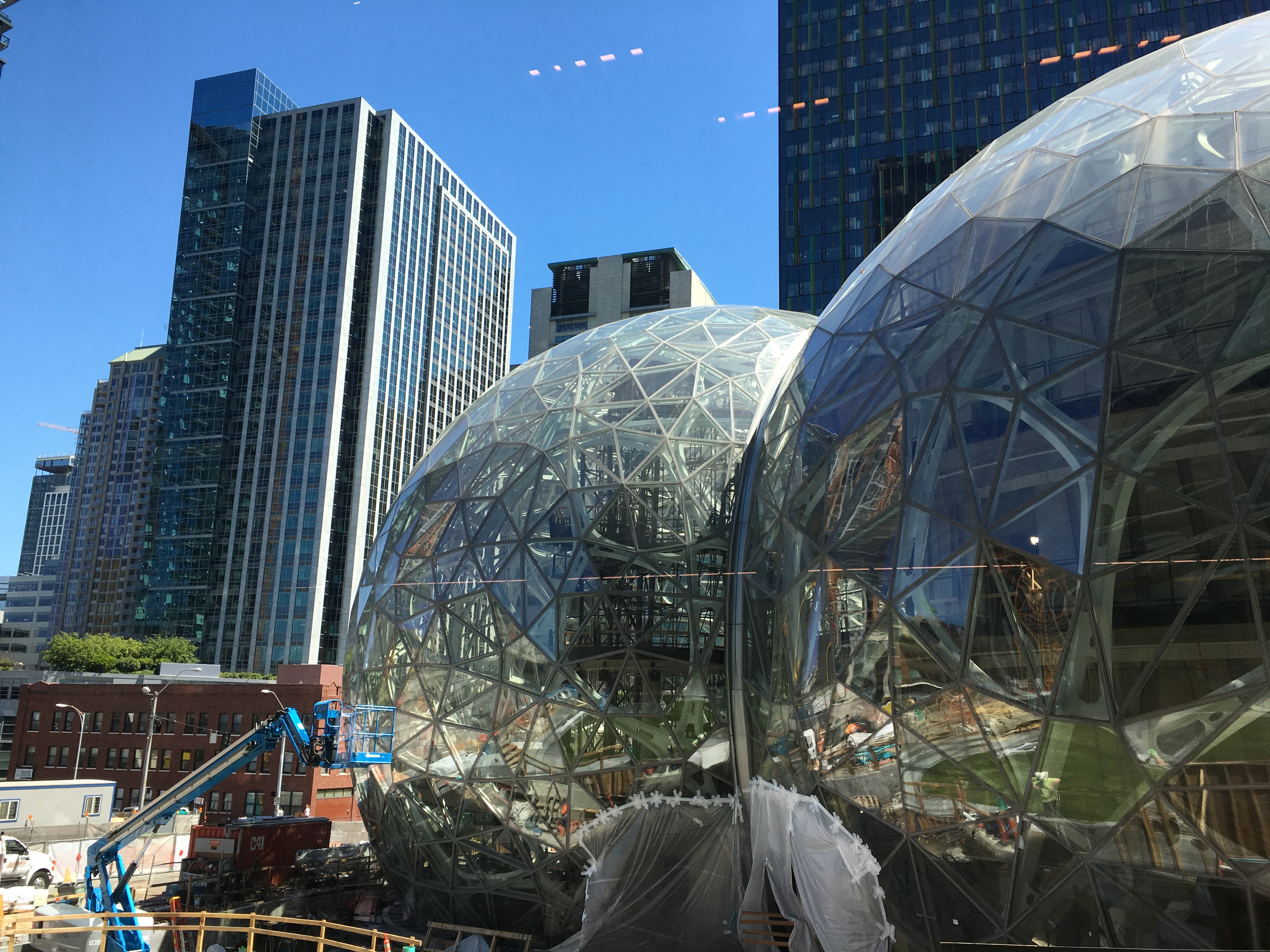 Apart from a handful of naysayers, there appears to be a strong consensus forming in political and media circles that Philadelphia should make a bid for Amazon’s second headquarters, and that we might even have a shot.

Pro-Philadelphia takes are coming in from all the expected boosters (there was already a Council resolution) but also from some national observers who see Philadelphia’s strategic location, relative affordability, strong university ecosystem, and above-average transit infrastructure as the most compelling combination of assets for the online retail giant.

Lyman Stone points out that no American city meets every requirement listed in Amazon’s RFP, but that Philadelphia is on the shortlist of cities that check the most boxes—including being one of a very small number of metro areas who demonstrated a willingness to build more than 5,000 new housing units since 2010: 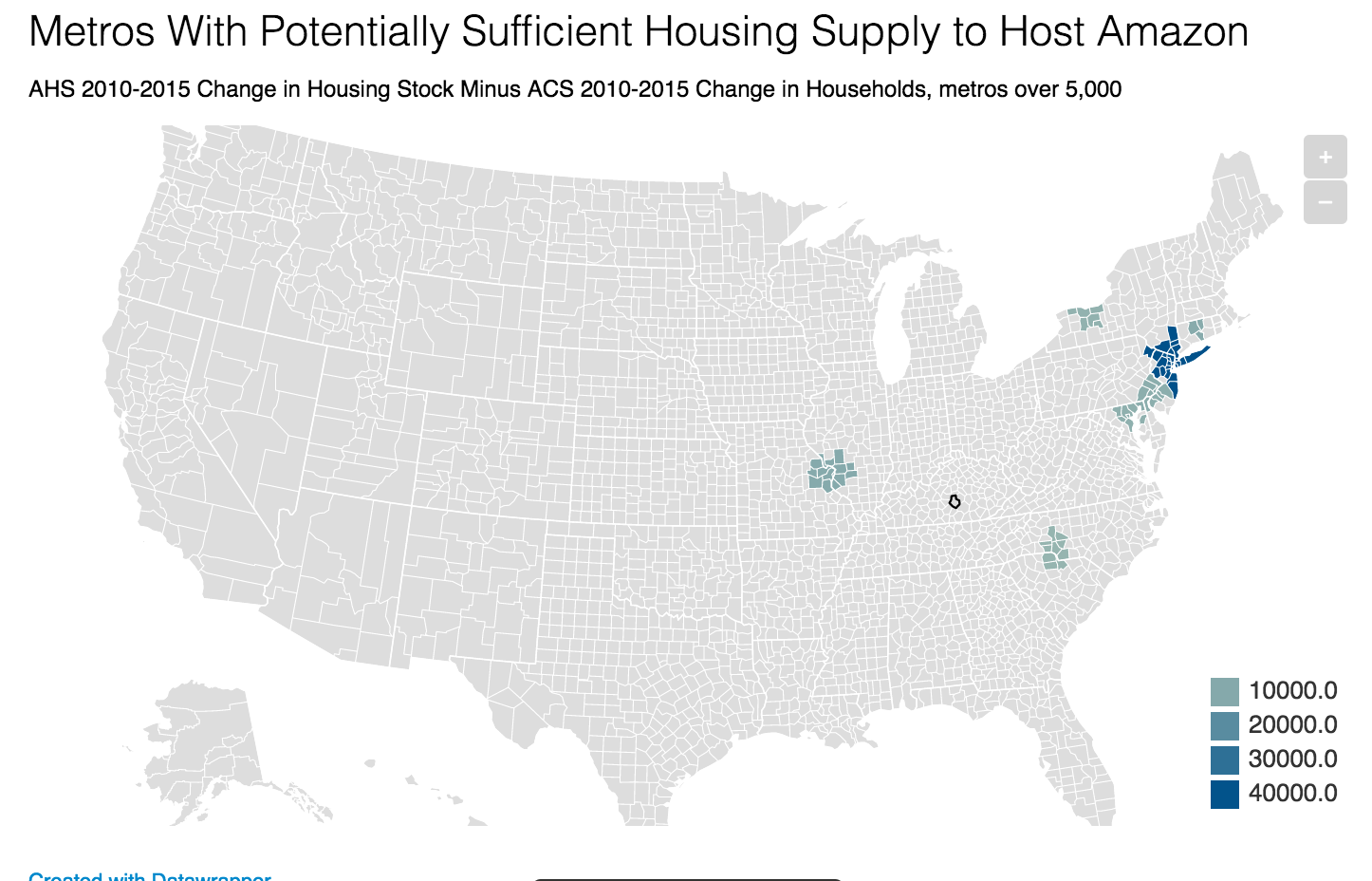 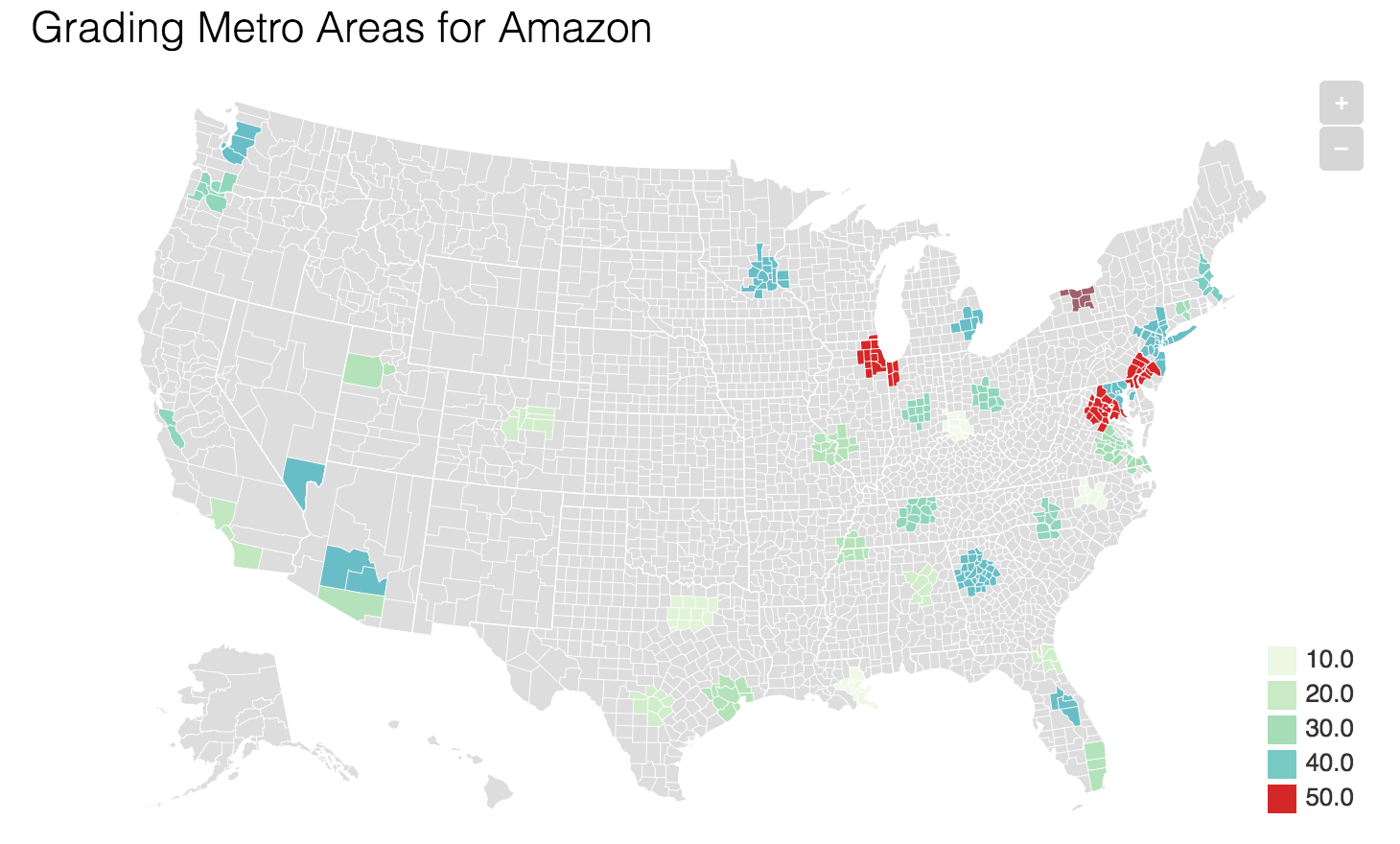 One challenge that a lot of other cities will have with meeting the requirements of the RFP is that the kinds of very desirable, transit-accessible locations that would appeal to Amazon have long since been built on. A transit-accessible, 500,000 square foot vacant parcel in the central business district (just for starters) would be difficult to find in many places, but Philly has the advantage of being a little late to the game on re-urbanization, so we do have a lot of available land in good locations. Not every site within Philadelphia is created equal though, and if we’re going to make a bid, it’s time for everyone to recognize that there’s one location that is head-and-shoulders better than the rest.

Of all the possible locations that have been mentioned, Schuylkill Yards and the 30th Street Station District are best suited to play host to Amazon’s new headquarters, and the city should cut to the chase and make this the centerpiece of its bid. The City, SEPTA, Amtrak, University City District, and both West Philly universities have already spent a ton of time and energy creating a plan to accommodate mega-developments in this exact area, and an Amazon headquarters is probably the best hope we have for achieving the more outlandish and expensive parts of that plan, like decking over the rail yards.Reams of market data exist from both the 30th Street Station District planning process and the Brookings Institution’s recent Innovation District report, which highlighted this area’s potential to become a center for companies in STEM-related fields. In addition to being compelling on the merits, there is a fully mature marketing package that’s ready to roll at a moment’s notice. Between Schuylkill Yards and uCity Square there are several sites that meet Amazon’s requirement for 500,000 square feet of land to start with, and two different developers to work with: Brandywine and Wexford. In the Navy Yard, there is only Liberty Property Trust. 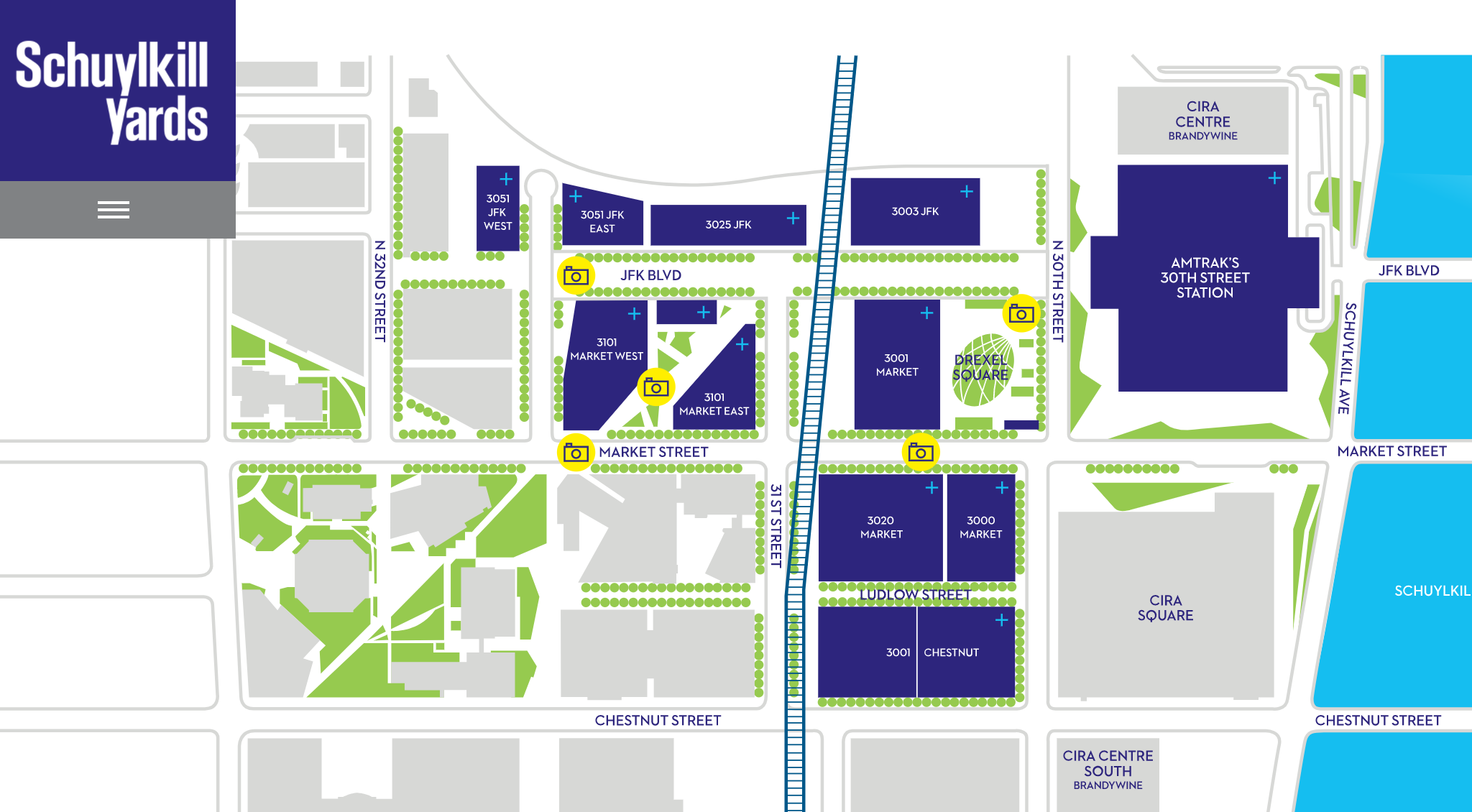 Transit infrastructure is an important consideration in the Amazon RFP, and the transportation access at Schuylkill Yards is unrivaled. There are Amtrak connections to New York City and Washington, DC, regional rail connections to the suburban counties, and access to the Market-Frankford Line and West Philly trolleys. The airport is less than 30 minutes away via a straight shot down 76, and 95 is nearly as accessible. And execs could get to the massive new fulfilment center in the Lehigh Valley in roughly 100 minutes. As this infographic from the State of University City report shows, almost 60% of the region’s population can access University City via transit within one hour, and 90% of the population can access it by driving—and that’s during rush hour. Amazon has estimated that they could potentially create 50,000 jobs near their new campus, so this is the best possible location if we want to diffuse housing demand throughout the region, and also minimize traffic congestion. 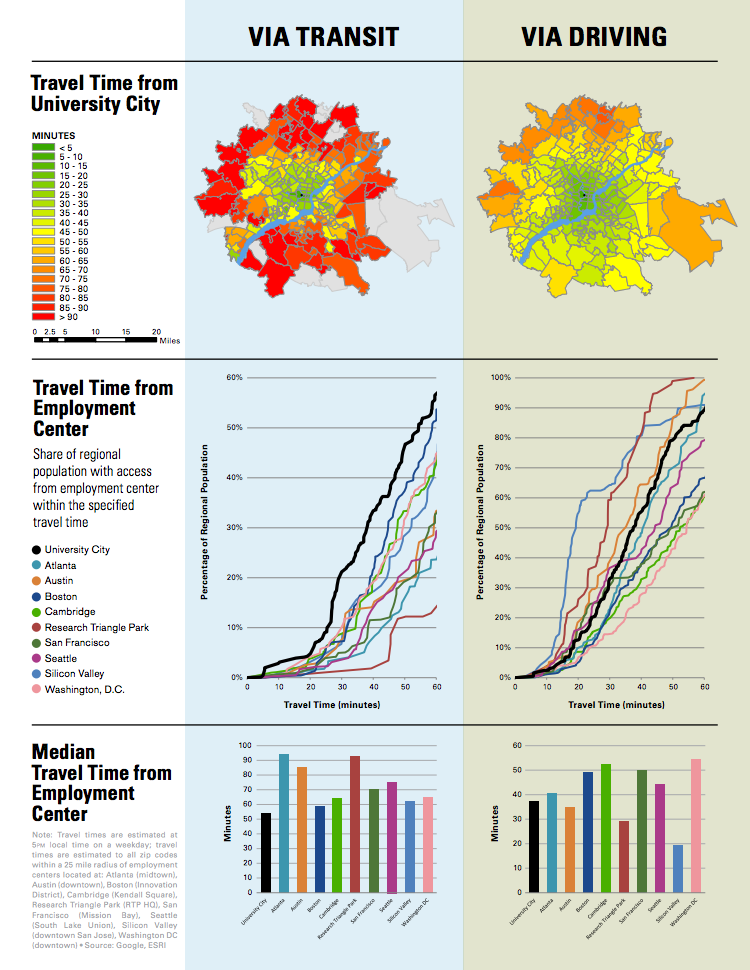 By contrast, the Navy Yard doesn’t meet the minimum transit requirements. The Navy Yard has certainly seen impressive growth, adding over 11,000 employees in just the last decade. But it doesn’t belong on the short list because it already badly needs the Broad Street Line extension to serve its existing employers, and the Navy’s ban on housing within the complex means that few people would be able to walk to work. At Amazon’s Seattle campus, about 20% of employees walk to work. Trying to cram 50,000 new people into the Navy Yard via shuttle buses and personal vehicles isn’t going to work, and the BSL extension likely isn’t opening within the next 10 years even if it were to receive a federal funding commitment relatively soon. And while we absolutely should view a potential HQ2 as transformative, we need to disabuse ourselves of the notion that Amazon is going to select a location based on the impact that choice will have on the surrounding area; they are going to pick a spot that works as close to perfectly as possible from day one.

The North Philadelphia Station area near the Broad Street Line and Amtrak is an under-rated choice just from a transit infrastructure perspective. It’s located a short 10-minute subway ride from City Hall, and the New York City-based HFZ Capital Group is already pursuing a large office complex there.

North Philadelphia’s transit infrastructure was developed at a time when the city expected a million more people to be working there, and the subway capacity exists to serve a whole new Uptown business district. This is currently a very disinvested area though, and it’s not clear whether Amazon would consider locating in an edge neighborhood out of comfortable walking distance to the kinds of amenities that University City already has. At the same time, if Amazon were to announce a North Philadelphia location, this would change the real estate market there overnight, likely setting off a wave of ancillary development in expectation of the company’s arrival. Others have mentioned Callowhill as a possibility, as the City did recently upzone a large area east of Broad Street between Callowhill and Spring Garden for more high-rise growth. The transit connections here are much worse than in University City, though it is a reasonably short walk from the good transit infrastructure in Center City, particularly the Broad-Ridge Spur. There’s a question, though, about whether an Amazon campus—which could eventually expand to include 8 million square feet of new high-rise office space— is really the best outcome for the Rail Park area. And the further east you go in Callowhill, the further you get from good regional and inter-regional transit access.Taxing Matters

University City is also in an existing Keystone Opportunity Zone (a feature it shares with the Navy Yard), where state and local taxes are abated for a long period of time. Amazon is putting cities on notice that they’ll have to pony up a package of incentives, and the KOZ program is already extremely generous, and doesn’t require a round of legislative wrangling. The state legislature likely won’t spring to action to create new KOZs for the North Philadelphia Station area or Callowhill, or any of the other possible locations that don’t currently have the designation. The more we think the state will be an unhelpful partner, the more we should point Amazon toward locations where the tax benefits have already been established. It’s certainly possible Amazon will want to negotiate for incentives over and above the KOZ, and assuming that’s the case, elected officials should use this opportunity to think about options for broad-based tax changes that will benefit Amazon, but also other local businesses. (For instance, could the economic boost from Amazon justify eliminating the net income portion of the Business Income and Receipts Tax?)Whether Amazon is really looking at Philadelphia for its second headquarters or not, no one really knows. But the endless stream of Amazon takes has been instructive for putting Philadelphia’s strengths in perspective, and clarifying what we must improve to compete for these kinds of opportunities.If Amazon is indeed considering the East Coast, Philly is the best option they have. And within Philadelphia, University City is the clear choice.