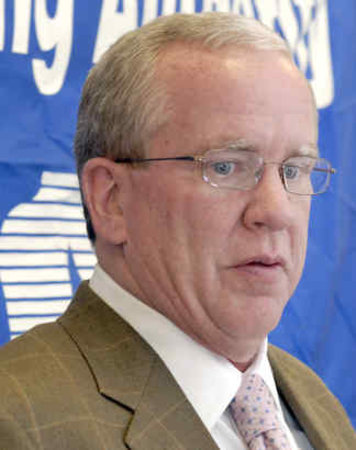 Adding to this extremely unjust outcome, Claudia Vargas reports that Fenerty will leave office as the city's highest-paid pensioner. He will receive an eye-popping $154,000 a year, which works out to $12,885 a month.

Vincent J. Fenerty Jr., 60, submitted his resignation to the PPA board 33 years into his career and a day before he was expected to be fired. He stands to collect an estimated $154,620-a-year pension.

Fenerty was accused of sexually harassing two coworkers, one in the early 2000s and another around 2014.

Deputy Directors Corinne O'Connor and Richard Dickson will serve as the interim directors.

While there's probably nothing the city can do to avoid paying the disgraced ex-PPA boss the city's most generous pension, this incident hopefully can start a conversation about whether executive pensions should be capped at some amount going forward. Republican ward leader Adam Lang first proposed this on Facebook yesterday, and received some encouragement from Helen Gym's chief of staff, Jennifer Kates, which could suggest there's some cross-ideological appeal.

Twelve thousand dollars a month is way in excess of what any person would need to retire in comfort, and it's quite a lot to ask from our very strained city budget.

If pensions were capped at, say, $80,000, would that not be a sufficiently comfortable retirement when Social Security is added on? Also, it's probably safe to assume executives earning in the neighborhood of Fenerty's salary are squirreling away some private savings too, as Lang pointed out.

Retirement security is an important value. No decent person wants to see public servants living out their post-work years in poverty. But continuing to award super-deluxe pensions like Fenerty's to the city's top brass is an unaffordable extravagance given all the demands on the City budget from current services, and all the services many residents would like to have in addition to these.