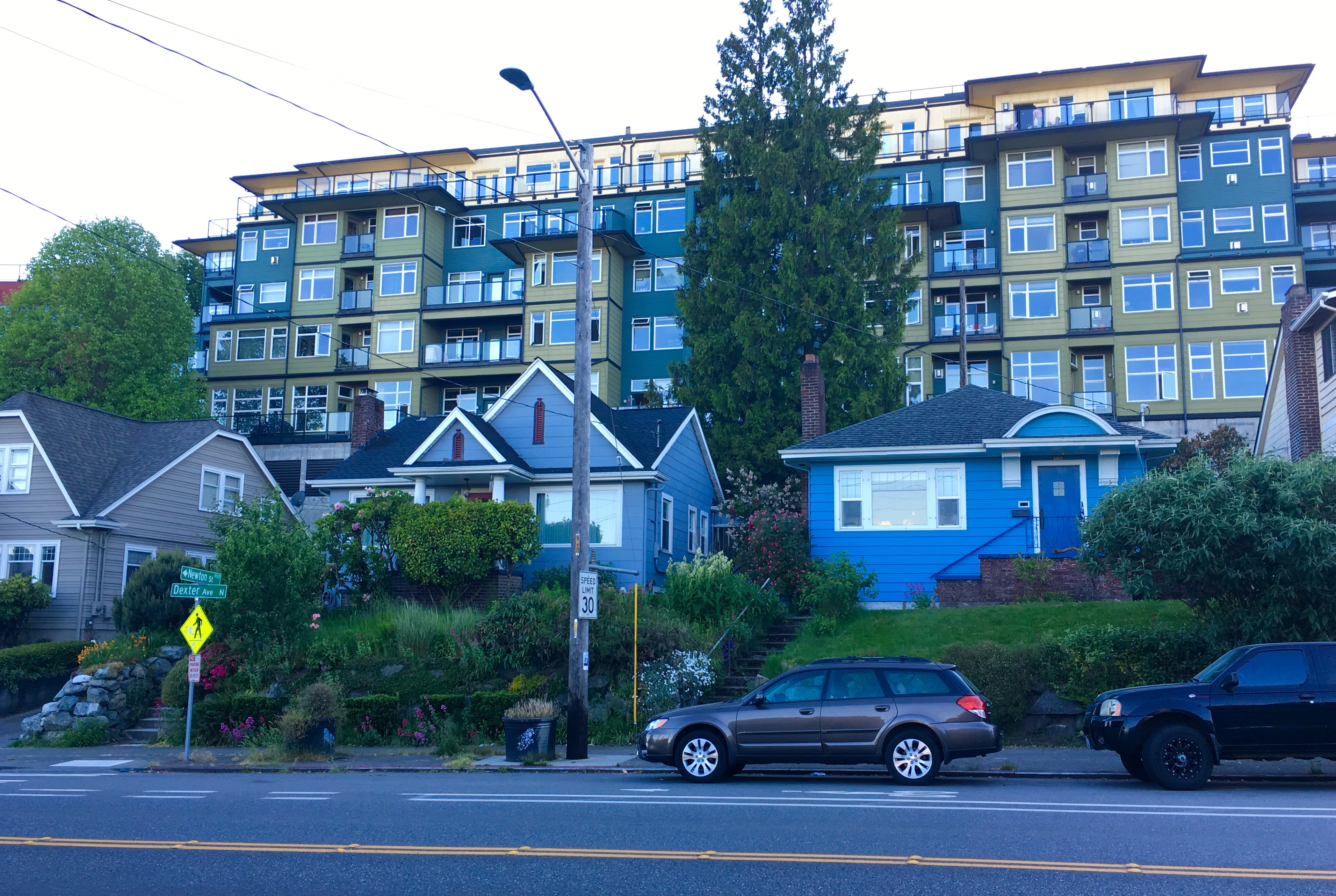 The move is hardly surprisingly in light of other recent Trump actions to reorient the EPA and federal land policy around an agenda that's much friendlier to extractive industries, but it has nonetheless crystalized the realization that the federal government cannot be counted as a partner on climate change mitigation or adaptation efforts, at least for the next 4 years.

There's no silver lining to this scenario from the standpoint of wanting to preserve human civilization as we know it, but one positive development that occurred after Trump's announcement is that city and state leaders across the country publicly committed to carrying more of the weight on their shoulders.

So far, 30 Mayors, including Jim Kenney, along with several Governors, university Presidents, and over a hundred business leaders have stepped forward to announce their commitment to redoubling their own efforts to reduce greenhouse gas emissions in line with the Paris agreement.

Kenney's list of climate initiatives the City will undertake in response is largely a restatement of existing efforts, which is heavy on reducing energy use in existing buildings. That makes sense since about 60% of our greenhouse gas emissions come from existing buildings. 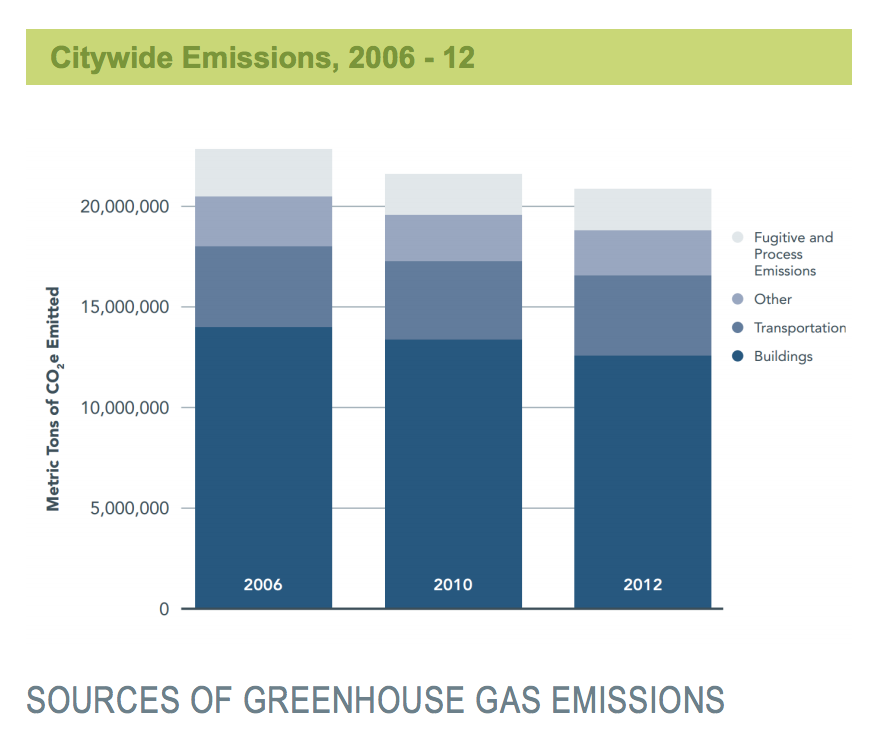 Under the Nutter administration's Greenworks initiative, the city made some significant progress in reducing building energy emissions, and also undertook an internationally-celebrated program of using green infrastructure to soak up stormwater runoff at the surface, as an alternative to building multi-billion dollar underground holding tanks. (For a guide to Philly's current climate thinking, see the Greenworks 2016 Vision document and the "Growing Stronger: Toward a Climate-Ready Philadelphia" report on climate adaptation strategies.)

The second-largest source of emissions comes from the transportation system, though, and on this front, elected officials' thinking has been maddeningly unambitious. The list of goals in the new Greenworks vision document are piecemeal and don't aspire to anything transformational, plus there's nothing concrete that citizens can even hold elected officials accountable for: 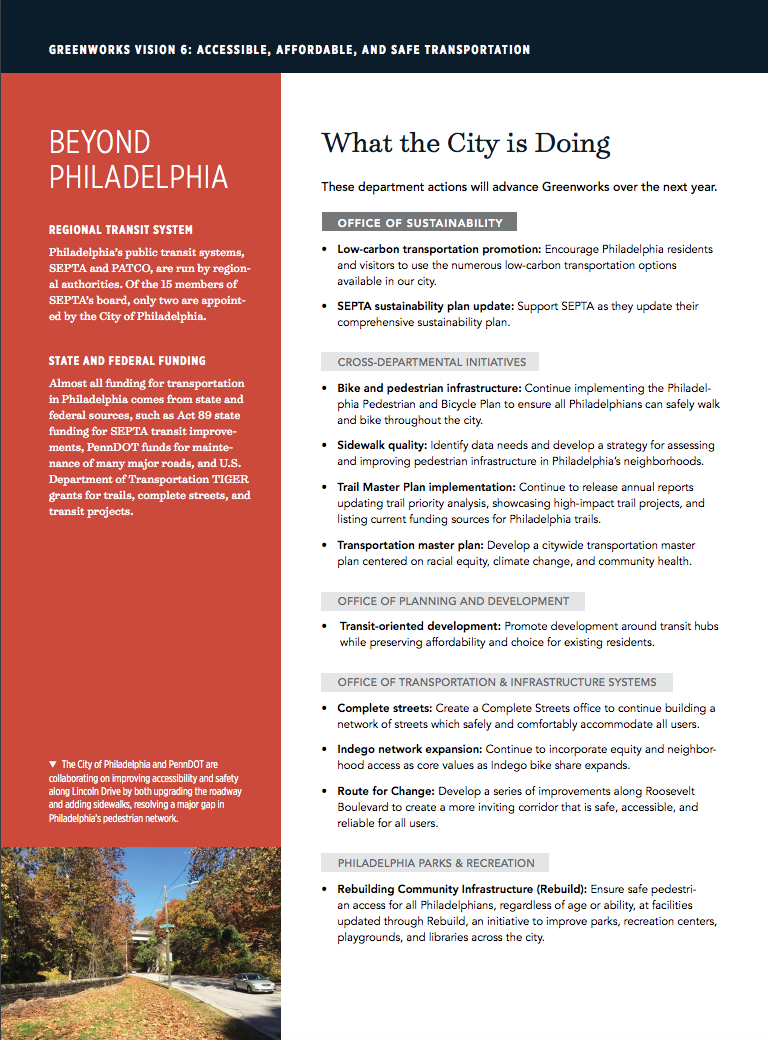 Even during the last administration, whose top-level commitment to sustainability was arguably stronger than Jim Kenney's, Michael Nutter and City Council delivered neither significant transit nor bike infrastructure investments, and they mostly avoided making any policy changes that would substantially disincentivize solo-driving--still the number one way that Philadelphians get around.

It's also a mistake to think about the transportation system in isolation, since transportation is used to move people to places, and the physical building patterns of those places will themselves determine what types of transportation vehicles people find convenient to use. Council President Darrell Clarke thinks Philadelphians want to "drive to the corner store", and he's been rezoning neighborhoods accordingly, but in reality, most people will actually find driving less convenient than walking if there's a store just a couple blocks away.

Zoning is what determines whether or not it's legal to build neighborhoods where people will find it most convenient to walk, bike, or use transit, and as Josh Barro points out at Business Insider, denser land use and better transit are the most powerful levers that local-level leaders have to make a difference on climate right now.

State and city governments shape Americans' carbon footprints through the policies they make about land use and transportation. If mayors and governors want Americans to emit less carbon, they should allow homes to be developed densely near people's workplaces, and they should provide transit options that are attractive compared to driving.

Some municipal leaders have largely gotten these issues right. Los Angeles Mayor Eric Garcetti has matched his anti-emissions rhetoric by making transit and density two cornerstones of his administration, fighting successfully for a dedicated sales tax increase to expand LA's subways and bus service, and beating back efforts to limit dense residential development.

Now that other mayors and governors have scored their points by expressing their resistance to Trump on America's participation in this non-binding agreement, they should take a moment to reflect on whether their jurisdictions are doing as much as Los Angeles to change their ways on emissions.

Here in Philly, Council has very likely reduced allowable density on net over the last 5 years through zoning remapping, though we won't know to what extent until the Planning Commission releases their five-year report this fall. And despite a lot of talk about multi-modal transportation, city transit ridership has continued falling for years after a brief increase during the recession, and elected officials are largely incurious about what they can do to support transit through their control of land use and streets (hint: a lot.)

One of the more promising items on Kenney's list is his announcement that "the Office of Transportation and Infrastructure Systems will begin work on transportation planning that promotes equity, increases safety, and reduces carbon pollution that currently accounts for 17% of Philadelphia’s emissions." The Greenworks vision report says this work will begin in 2018.

It's possible that a lot of good ideas, including on the land use side, could be smuggled in through that initiative, but as a short-term downpayment, City Council could get busy passing the Transit-Oriented Development bill (No. 170062) that we wrote about recently to promote denser, low-car development close to existing transit hubs. The bill is far from perfect, but it's a start, and there's less time to waste than ever.