Here's a graphic from Commissioner Al Schmidt's office showing where each of the 34 candidates landed: 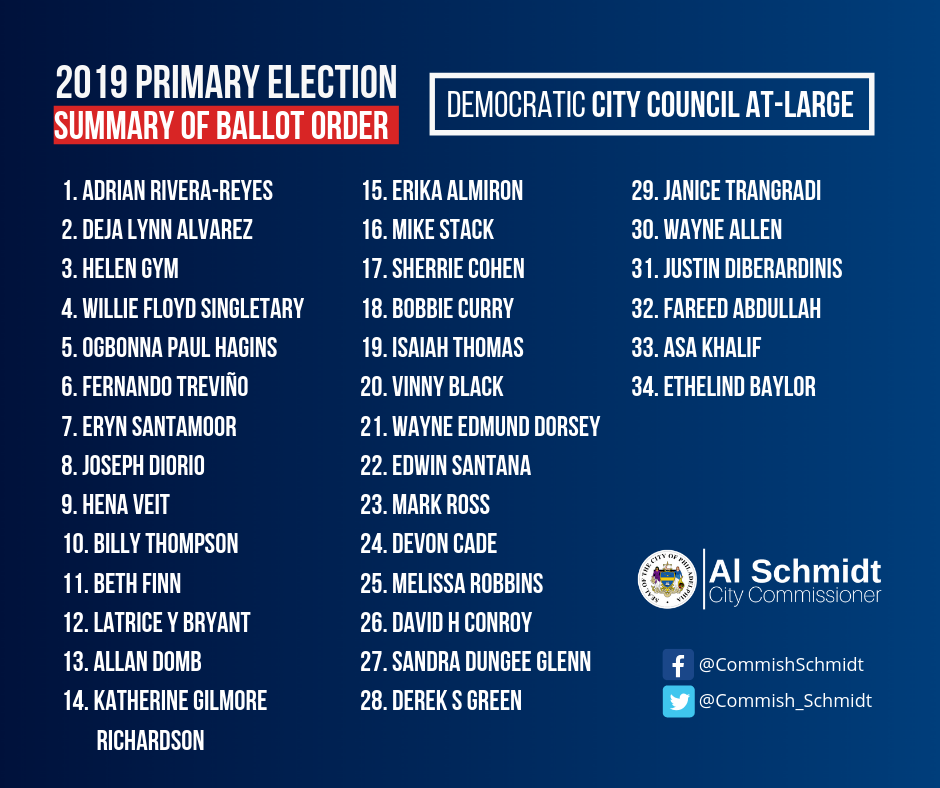 There are a few important things to keep in mind about this. First, petition challenges are just getting started, so it's likely at least a few candidates on this list will be removed due to bad signatures. One candidate, Devon Cade, challenged 30 other candidates' petitions, and it's not clear yet whether any of these challenges will be successful. Here's a list of who all is being challenged: 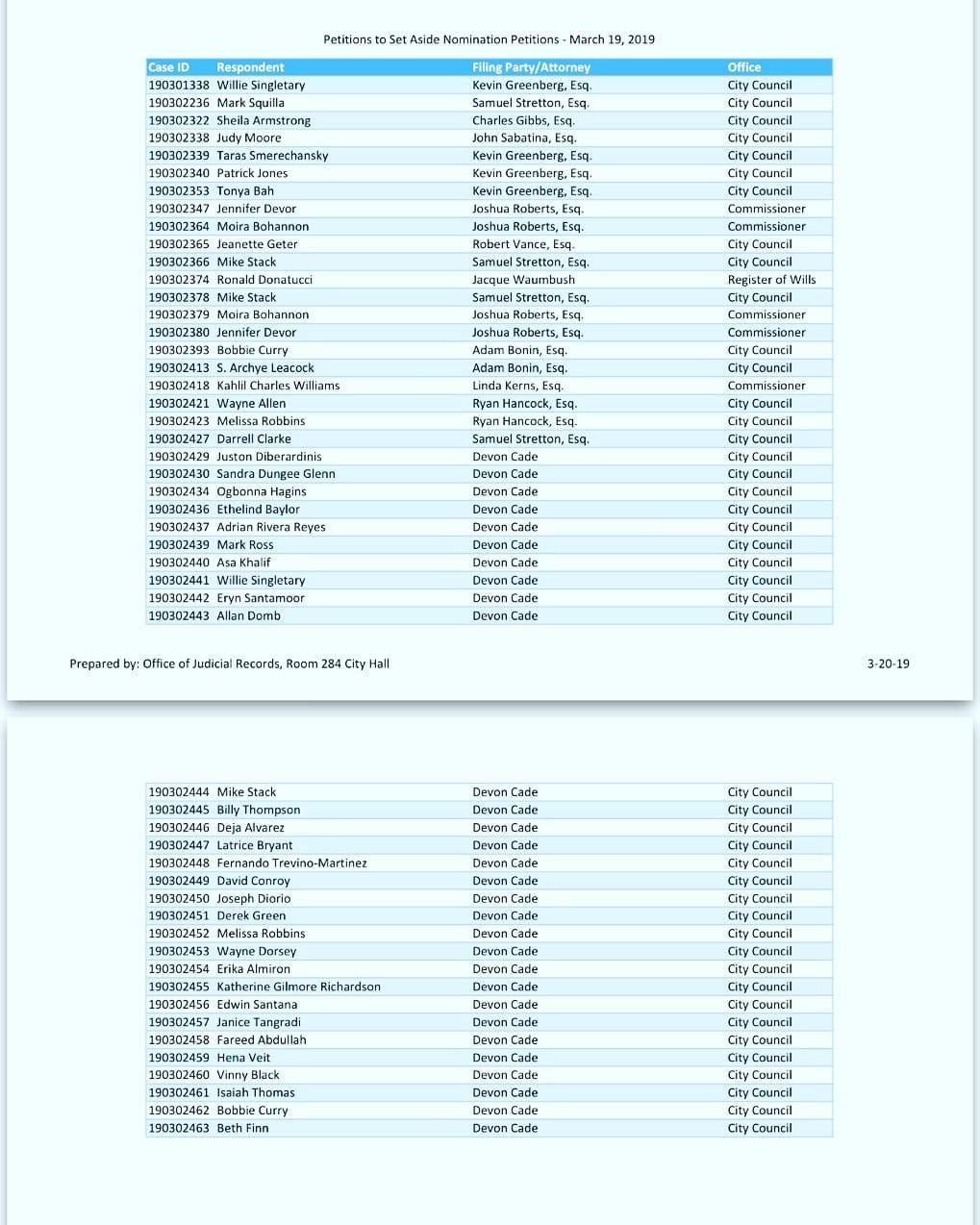 And apart from the challenges, it's also likely that a few of these candidates will withdraw on their own if they don't like the ballot position they drew. With a field this large, the kind of ballot lottery dynamic that we typically see with judicial elections takes over, tempting a lot of people who may be only halfway committed to a run to go through the petition process just to see what ballot position they draw.

Under the process that played out yesterday morning, candidates go to City Hall to draw a numbered ping pong ball from out of a Horn and Hardart coffee can, which determines their position on the list of candidates on voting machines citywide.

One person who seems very likely to be removed from the ballot is Willie Singletary, the former Traffic Court judge who was convicted of a felony, and is thus unable to service in elected office under the Pennsylvania Constitution.

Singletary drew the number 4 ballot position, which is a very advantageous spot. Candidates all want to be in the top 5, since voters can select up to 5 choices in the primary, and voters' eyes are drawn to the top lefthand corner of the ballot.

A recent post from Jonathan Tannen showed that in the Court of Common Pleas elections, candidates in the first column win over twice as often compared to random positioning. 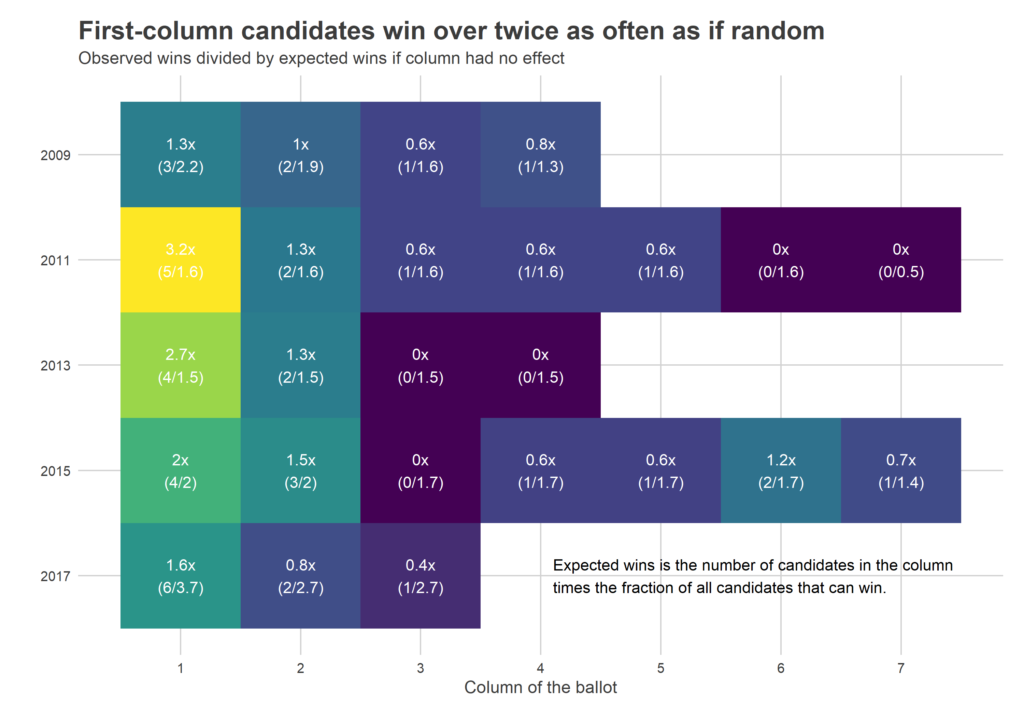 And finally, the ultimate ballot design will determine the number of rows and columns, and will determine who ends up in the top row, second column, and other second-tier favored positions. We won't see that for about another month.

This is obviously a horrible way to choose judges, and it's also a horrible way to choose At-Large City Council candidates, as it means some unqualified people are inevitably getting into office purely by the luck of the draw. As much as some might like to comfort themselves with the idea that the media and campaigns and voters' own information-gathering practices can overcome the ballot position effect, Tannen finds it matters more than factors like Democratic City Committee's endorsement, the Inquirer's endorsements, and the Philadelphia Bar Association's ratings:

"Being in the first column nearly triples your votes versus being in the fourth or later. The second largest effect is the Democratic City Committee endorsement, which doubles your votes versus not having it. (Notice that the DCC correlation isn’t plausibly causal, the Committee certainly takes other factors into its consideration. Perhaps this correlation is absorbing candidate’s abilities to raise money or campaign. And it almost certainly is absorbing some of the first-column effect: the DCC is known to take ballot position into consideration!)

This last point is an interesting one with regard to the At-Large Council race, as there are two open At-Large seats that Democratic City Committee will be making endorsements for. Who will they prefer? City Committee always backs incumbents (with the exception of Maria Quinones-Sanchez and Brian Sims) and they also prefer a slate that's evenly balanced between black and white candidates, and male and female candidates.

If I had to guess, typical DCC logic probably says there are openings for 1 black candidate and 1 white candidate on their slate, to replace outgoing members Blondell Reynolds-Brown and Bill Greenlee. But who? Do they go with Adrian Rivera-Reyes and Deja Alvarez, in the top two positions? A Democratic Socialist and a transgender advocate, respectively, aren't typical of the kinds of candidates the ward leaders usually go for, but then again, there also aren't really any obvious DCC favorites anywhere in the top 15 slots besides incumbents Helen Gym and Allan Domb so we're already in uncharted territory.

Complaining about the absurdity of the ballot lottery is a time-honored tradition, but looking ahead, there's finally a path forward to do something about it. The new voting machines that the City Commissioners selected have the technological capability to finally support randomized ballot position and also ranked choice voting. That means it's possible for the voting machines at each polling place to display a different ballot order, completely negating any electoral effects from ballot position. This change may or may not require a change to state election law, but either way, now that the technological obstacles are surmountable, it's time to reform our elections an finally retire the coffee can.