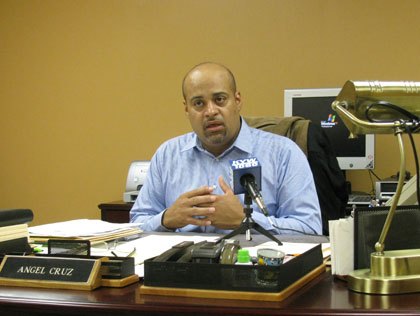 Holly Otterbein's profile of Sanchez for Philly Mag had a good succinct summary of Sanchez's ongoing feud with the Democratic machine:

Why the hate? Sánchez’s problems in her home district are more complicated, but there’s no mystery why the city’s machines can’t stand her: She didn’t wait her turn, and she’s constitutionally incapable of rolling over.

At 30 years old, she challenged 7th District City Councilman Rick Mariano, a white guy with close ties to Johnny Doc who represented the most heavily Latino district in the city, a tortured, twisting ad for gerrymandering that then stretched from the eastern side of North Philly to the Lower Northeast. Mariano’s idea of serving his Puerto Rican constituents was crude, at best. He once told a reporter he wanted to build a ballpark in his district because Latinos didn’t care about economic development projects. “[They] don’t mean anything to José from 2nd and Lehigh,” he explained. A ballpark, on the other hand, “means something. He can see and touch it. It’s a field of dreams. … These people, you got to throw them a bone.”

She lost that race. Seven years later, Mariano was gone, serving four years in federal prison on a bribery charge. (When he got out, CBS Philly reported, his first post-prison phone call was to Brady.) In another town, the Democratic Party might have sought to replace Mariano with the highly qualified Sánchez.

Instead, the city’s ward leaders picked one of their own, Daniel Savage (another white guy), to serve out Mariano’s term. In 2007, Sánchez ran again, this time against Savage. She crushed him, 52 to 41 percent.

The Party put Danny Savage up again against Sanchez in 2011, and she crushed him again, taking 60% of the vote. And then in 2015, random Ward man Manny Morales was the Party's choice against Sanchez until some racist and homophobic Facebook posts surfaced that led the Party to withdraw their endorsement. Morales denied his posts were his posts.

State Rep. Angel Cruz, who helped run Manny Morales's failed 2015 campaign and is now running in the 7th District primary this year, is the first challenger Sanchez has faced who is an established elected official, so you might imagine that he would be coming to the table with some kind of real campaign agenda to talk about, or at least a vision equal to the enormous challenges facing Philly's poorest City Council District. The Inquirer's infographic included in their recent profile of the 7th District primary shows the poverty rate there is still a grinding 37%.

But when given an opportunity to talk to the media for that profile, Cruz doesn't even try to mask that this is all just a personal grudge match.

On the issues, Cruz doesn't offer any major contrasts with Sanchez except on the question of soda tax repeal, where he says opposes the soda tax but wouldn't repeal it without an alternative revenue source in place for Pre-K or Rebuild. His biggest ideas are to designate a city lot for people to dump broken refrigerators and TVs on, and to hire all the ward leaders in the 7th District. That's it!

Cruz says public services in the District aren't good enough, but his argument isn't that Mayor Kenney's agency leaders are under-serving the 7th District and need better Council oversight. That would be a pretty reasonable argument! Rather, he's saying that Sanchez "doesn’t have representation in her office of people who can come back and tell her what the neighborhood needs"—people like the ward leaders!

"If elected, Cruz said he’d give every ward leader in the district a job.

“This is not a one-man job,” Cruz said. “They can be the eyes and ears of needs of everyone in the district,”

Cruz is a proud cog in the city’s Democratic machine. He helped run the campaign of Manny Morales, who challenged Quiñones-Sánchez in 2015. Morales’ homophobic, racist, and misogynistic Facebook posts lost him the endorsement of the party, though he only lost the election by 900 votes.

Cruz is running largely on the premise that he can unite local leaders.

“I’m not perfect but at the end of the day I know how to walk into a room and not get kicked out of it," he said. "And I’m not gonna kick people out.”

Being a person who can behave and not get kicked out of places, or being friends with some ward leaders, doesn't add up to a good enough resume to replace an incumbent who's as accomplished of a legislator as Maria Quinones-Sanchez. Council member Sanchez isn't always right on every issue, but we enthusiastically endorsed her reelection campaign because one thing that's never in doubt about her is that she takes the job really seriously and is always working on new legislative solutions to make her constituents' lives materially better.

Rep. Cruz, by contrast, isn't taking this seriously and isn't offering voters any reasons to vote for him that would make Kensington and North Philly voters better off. He's got no record of accomplishments in his current state representative office to point to, and the only thing he wants to talk about is settling a 12-year-old political vendetta, which is something the typical voter couldn't care less about.