First, some context. Seven of the 17 seats on Philadelphia's City Council are for At Large members. In an effort to minimize the likelihood of a single party holding all seven of those seats, the Home Rule Charter limits the number of candidates the major parties can nominate to five. The logic being, if the Democrats can only nominate five candidates, it is unlikely (though not impossible: see below) that the party will win all seven. In addition to the five Democratic and five Republican nominees, candidates of any and all other parties can also earn a spot on the general election ballot. Once the At Large field is set, the race is free-for-all, with the top-seven finishers -- Democratic, Republican, and everyone else -- earning a place on City Council.

There's a colloquial understanding that the two seats that cannot be won by the Democratic nominees are "set aside" for non-Democratic candidates. This isn't accurate; the At Large race is a first-seven-past-the-post general election, with all candidates competing against each other. However, because Democrats have such a dominant voter registration advantage, the five Democratic nominees for At Large are reasonably treated as shoe-ins, leaving everyone else on the ballot to fight for the remaining two seats.

Currently, those seats are held by Republicans Al Taubenberger and David Oh, but there's no requirement that these seats go to the Republicans. They could also go to a minor party member like the Greens or Libertarians, a hybrid political party and advocacy group like Working Families Party, or a totally made-up party like Term Limits Philadelphia. They could even go to registered Democrats, if those candidates were to run the world's most successful write-in campaign and finish in the top-seven.

Yesterday was the deadline to file petitions to get on the ballot for the general election, and Max Marin reports that seven independent candidates filed to get on the At-Large ballot:

Ten third-party candidates filed petitions Thursday to run in the general election — seven of them for City Council’s at-large seats.

(Milton Street, the former state senator turned convicted felon turned evergreen political candidate, did not file to run against Mayor Jim Kenney as he announced he would back in May.)

There are seven at-large seats on the legislative body, but voters can pick only five. Two seats are reserved for minority party or independent candidates.

The independents are not likely to best any of the five popular Democrats already on the ballot. 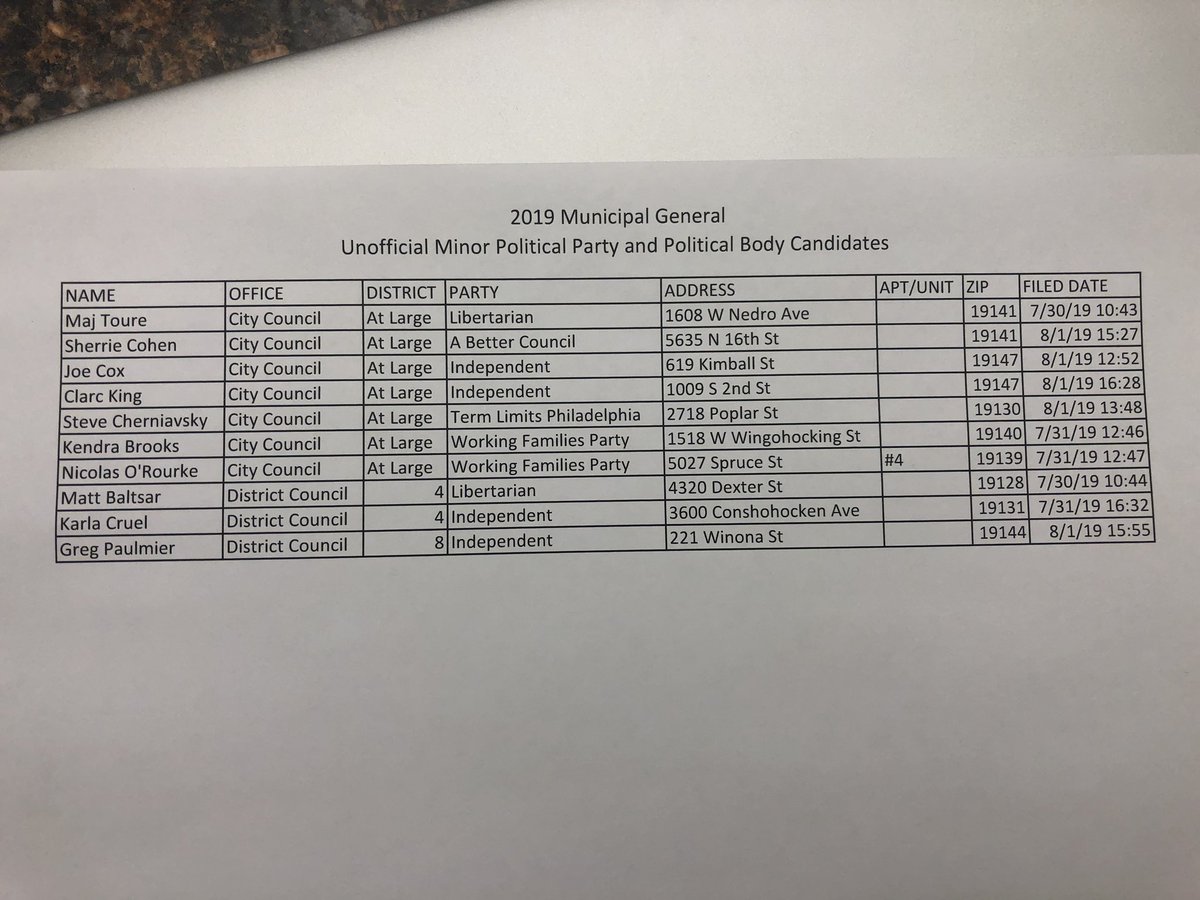 Historically, the Democratic nominees earn in the neighborhood of 100,000 votes, while the top-performing Republicans get around 35,000 votes, as Max notes. For two independents to beat the two Republican incumbents, they'd each have to do better than 35,000 votes.

This is easier said than done, and it's never once happened since this system was created in the Charter in the 1950's. This year though, we're likely to see the most concerted campaign yet to elect some further left candidates to the two "open" seats.

Education activist Kendra Brooks and Pastor Nic O'Rourke are running together on the Working Families Party ticket, which in New York City is an actual political party with a real ballot line that exists as a quirk of New York's fusion voting system. In Pennsylvania, the PA Working Families organization is more like a regular 501c4 political advocacy organization that does both issue advocacy and elections work. PA Working Families were part of an independent field expenditure for Larry Krasner in 2017, and this year they endorsed Democrats Helen Gym and Isaiah Thomas.

So far the national campaign is staying mum on how exactly they'll be involved, telling Marin they won't be giving money directly to Brooks and O'Rourke, but this doesn't preclude an independent expenditure.

The other two independent candidates running who have a recognizable profile, and could potentially split off left-leaning voters from a Brooks-O'Rourke ticket are attorney and activist Sherrie Cohen and PMA bike ride organizer Joe Cox. The Cohen name is a political family name many people are accustomed to voting for, and Sherrie Cohen was on Democratic City Committee's official endorsed slate in 2015. She ran again in the 2019 primary for several months before withdrawing from the ballot before the primary.

Interestingly, Cohen did not withdraw from the ballot by the required deadline, but obtained a court order to remove her name, so she isn't 100% safe from a ballot challenge under PA's "sore loser" law, which prevents candidates who ran in the primary from switching parties and running again in the general election.

There are a few other interesting wrinkles to this race. One is the extent to which Democratic actors will be able to publicly support their favorite independent candidates over the two Republicans. While most would probably rather see two more Democrats-in-all-but-name beat out the two Republicans, anyone with an official party position is going to have a hard time going public with it. That's because the Democratic City Committee bylaws give the party leadership pretty broad discretion to remove members who back non-Democratic candidates.

In many of the more "liberal" wards (to use the Bob Brady dichotomy) there will likely be interest in endorsing two independent At-Large candidates this fall, since it's a virtual certainty that all five Democratic At-Large candidates will prevail, but since that would require cutting two Democratic candidates from their sample ballots (remember, voters can only pick five people to vote for) that would be a big No-No in the bylaws. Elected officials have more leeway to get away with this—Michael Nutter endorsed his staffer Andrew Stober when Stober ran as an independent in 2015, and Rep. Malcolm Kenyatta was pictured among Brooks-O'Rourke supporters at their petition drop-off rally—but individual committee people likely do not. Bob Brady does not love that this is happening.

The other interesting wrinkle in the race is the Dan Tinney factor. Tinney is a Steamfitters union member who ran in 2015 in 2019, and this year he was the top Republican vote-getter in the Republican primary, beating incumbent David Oh

The Republicans always get some amount of Democratic cross-over votes, and David Oh in particular does. In a scenario where Brooks and O'Rourke don't make it into the top 7, but lots of Democratic voters who would normally support David Oh in particular end up abandoning him for the Brooks-O'Rourke ticket, or a known name like Sherrie Cohen, then Dan Tinney could end up being the big winner from all this.

Whatever happens, we're certainly in for one of the more entertaining municipal-year general elections in recent memory.