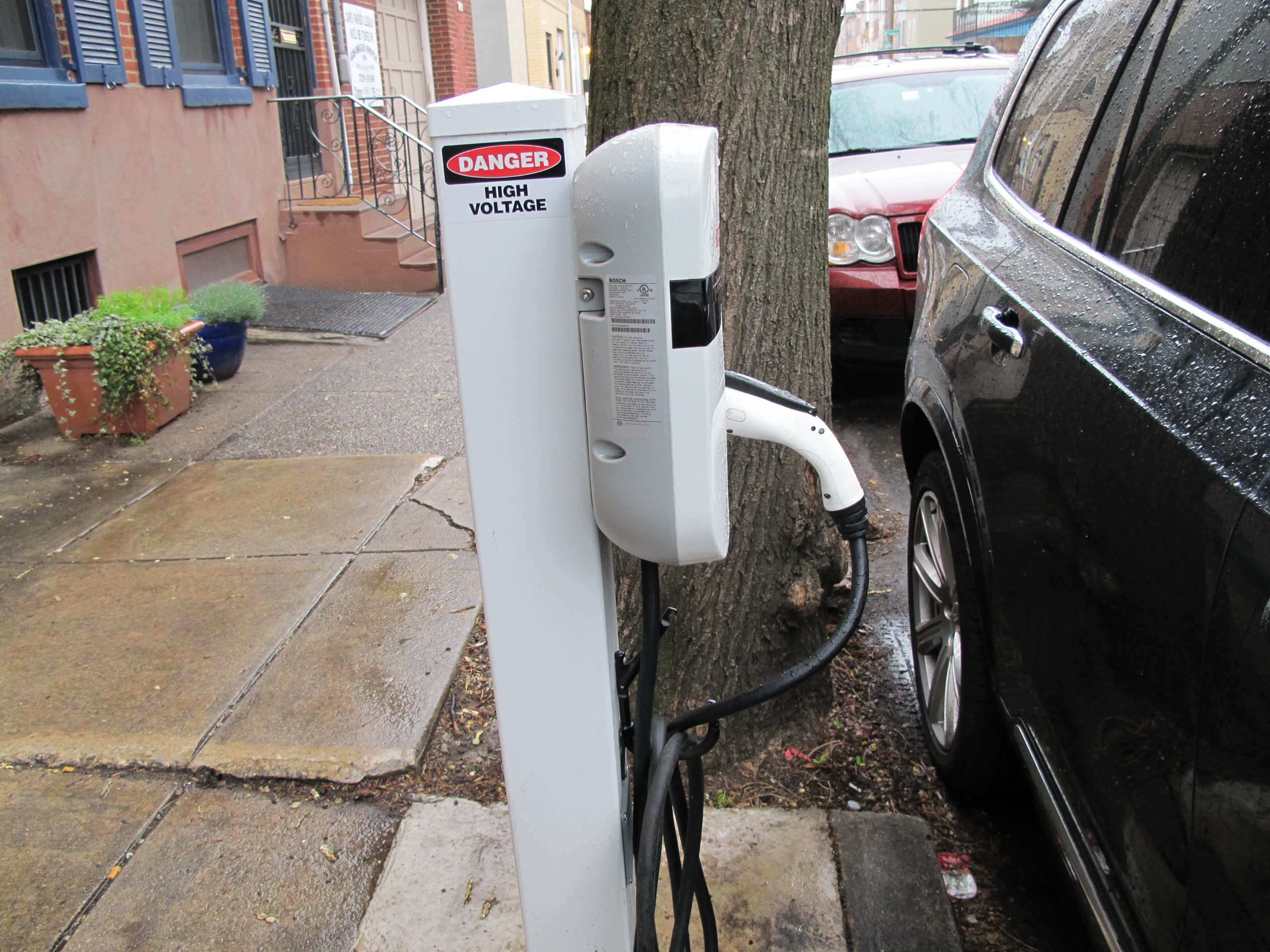 Vehicle electrification has figured prominently in Democratic politicians’ infrastructure and climate priorities, with various initiatives either already passed or currently in play at the federal, state, and local levels.

Electrification is a big priority in the Build Back Better infrastructure bill being debated in Congress, with $7.5 billion allocated for charging infrastructure development and $3 billion for battery development in the current iteration of the plan (which is highly in flux at the moment). In Pennsylvania, lawmakers passed an Alternative Fuel Vehicles rebate program in 2019 incentivizing consumer purchases of battery electric and hybrid vehicles, and here in Philadelphia, the city is making some moves around electrifying the municipal vehicle fleet, with a recently-announced plan to stop buying gasoline-powered vehicles by 2030.

Byron Brown at Bloomberg Law describes how the funding allocation is shaping up in the federal infrastructure bill, which seems to suggest places like Philadelphia with low ratios of parking to housing could see more funding to roll out charging equipment.

“The infrastructure bill prioritizes the award of grants to build EV charging stations in rural areas, low- and moderate-income neighborhoods, and communities with low ratios of parking spaces to households or high ratios of multi-unit houses to single- family households. One thing the bill does not do is remove the long-standing ban on providing commercial services and refueling at rest stops along most federal highways.”

The automakers themselves have been moving pretty quickly to roll out more electric car models even under the current policy mix, forecasting that they will stop making gasoline-powered cars altogether within the next 10-15 years, and this trend combined with a whole lot more federal money and favorable federal and state policies expected, it seems likely electric vehicles are going to see a big surge in popularity. Projections from Deloitte estimate the U.S. could see 25% EV market share by 2030. 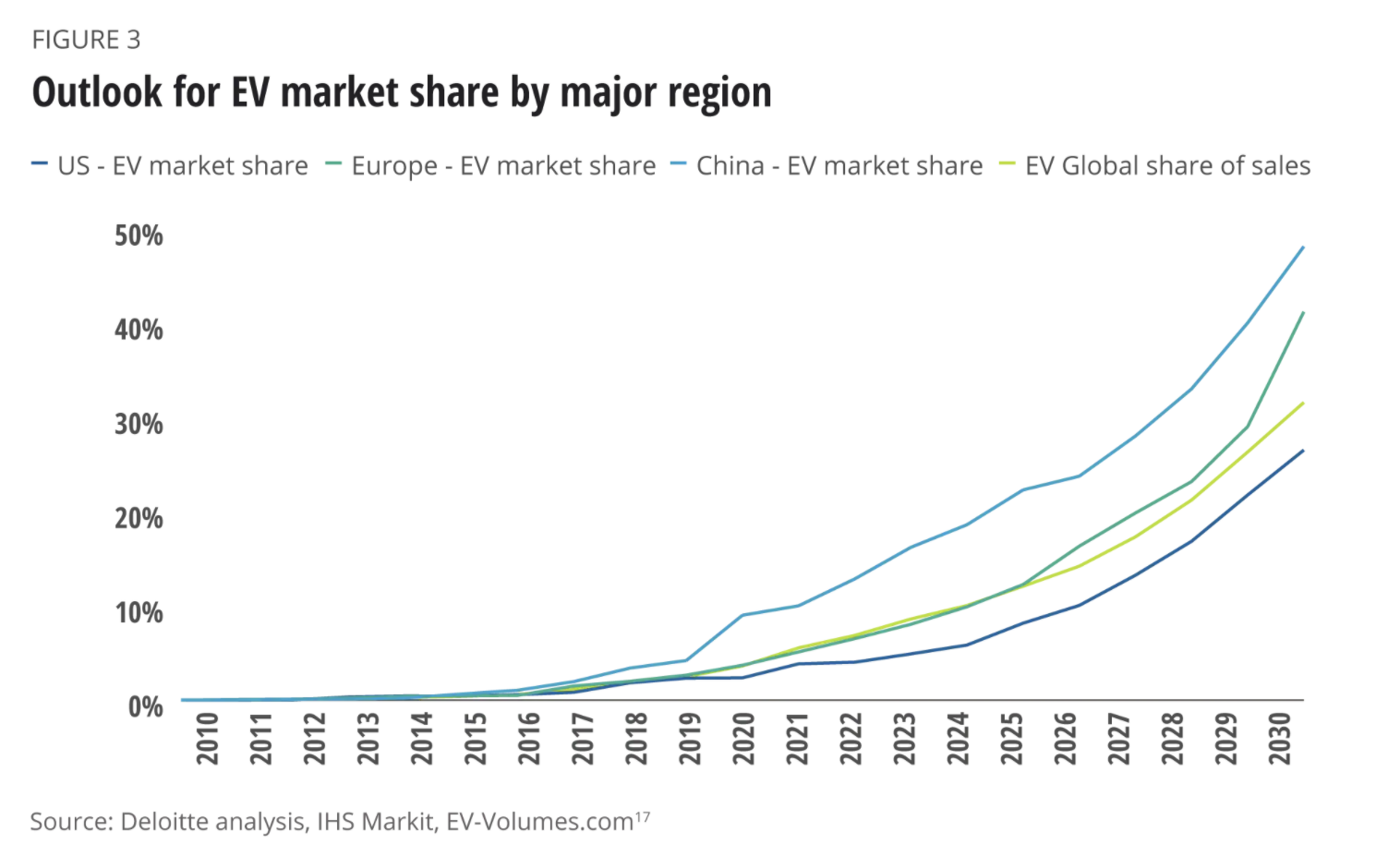 But the one real hard check on how fast a place like Philly is going to be able to make use of this funding, and transition more of the privately-owned fleet of gas-powered vehicles to battery-electric, is all about charging and parking. We're going to need a massive increase in access to electric charging, and the options for getting there all have major problems. Additionally, the City of Philadelphia is not going to be able to ramp this up through public means as fast as the transition will require, suggesting there's going to need to be significant scope for private action too.

As Frank Kummer at the Inquirer wrote this week about the city's clean fleet plan, electric charging infrastructure is still a big challenge to sort out for the city vehicle fleet transition, and that’s only 5,500 vehicles.

It’s a big task, especially without any large-scale charging infrastructure currently in place, according to the clean fleet plan by the city’s Sustainability and Fleet Management offices. But officials say that, over the long run, a complete transition to electric vehicles will save tons of carbon dioxide from being emitted from the tailpipes of municipal vehicles, as well as being easier to maintain [...]

The current lack of charging capability presents “the most challenging aspects” of the transition, the report notes. Chargers will have to work with a range of vehicles and be placed in easy-to-access locations. It will require centralized management of stations, the development of strategic charging hubs and adding charging requirements for parking spaces the city leases.”

Where things are really going to get sticky—and indeed, already have—is going to be when elected officials have to re-engage with the question of what to do about personal electrical vehicle charging needs in areas where most of the available parking is curb parking.

Once upon a time back in 2017, Philadelphia had an electric vehicle charging and parking program where residents could pay to have electrical charging equipment installed at the curb on their street, and pay a higher parking fee each year to park there.

The spots could technically be used by anybody with an electric vehicle, but property owners weren’t required to let others access their property’s electricity, which made them a mostly-private use of the curb space. The program was created in 2007, and over 10 years, only 68 total charging stations were installed. Then, a backlash arose in 2017 from one particular charging location that was installed at 4th and Pine, whichcaused such a hubbub in Society Hill that Councilmember Mark Squilla was moved to lead a successful charge in City Council to cancel the program.

The exact method by which this happened was that Councilmember Squilla was able to get support for putting a moratorium on the program until a newly-convened task force could review the issues and issue recommendations for changes or other approaches. What they ended up recommending was to scrap the existing program, and replace it with undefined alternative charging options in the public right-of-way that would not be private. Nothing more was done about this since 2018.

For context, there are roughly 43,000 metered and permitted on-street parking spots in Philadelphia, and vastly more free, unmanaged spaces, so the program could not be said to be eating into the city’s curb parking supply in any serious way, but even 68 semi-private spaces proved to be too much to withstand local parking politics—with depressing implications for mass conversion of the private gas-powered fleet to battery-electric power here.

Since then, Philadelphia hasn’t had any electric vehicle charging program, and there’s been no sign that the conversation has picked back up in city government with all this EV money potentially coming in from Washington.

There were undeniably some repugnant elements to the canceled approach of property-owner-funded on-street charging stations (turning a public spot into a semi-privately-owned one, with no guaranteed electrical access for others) but the past people who came up with the program in 2007 likely went this route because it was a way to get EV charging infrastructure funded without paying directly for it with taxpayer dollars. And perhaps because they recognized that this is still arguably one of the least-bad of all the options, at least in rowhouse neighborhoods.

One of the better alternative approaches might involve using curb parking lanes near public facilities like schools, libraries, and other publicly-owned buildings for electric vehicle charging and parking, where the City or a city-affiliated entity would directly sell electricity to drivers at the curb next to public properties. Another approach could involve incentivizing more businesses with existing parking garages to convert more spaces to electric vehicle charging spaces and offer paid overnight parking to residents. According to reporting by Reuters, the business model for private charging companies is still precarious, with high-speed chargers that can charge a vehicle in 30 minutes costing about $100,000 to build, which need to be in use about 20% of the day to be profitable. That may not be realistic for chargers on city streets, suggesting there may be a need for a more public role in making this viable.

Something that’s important not to lose sight of in this discussion as the issue inevitably gets revisited is an appropriate prioritization of green transportation goals.

Electric vehicles are an important part of the emissions reduction agenda for transportation nationally, but cars are still cars, and the most significant way that cars contribute to climate change isn’t even about tailpipe emissions, but about how much space they take up, and how much extra land is then needed to make car commuting a comfortable way to get around for lots of people. 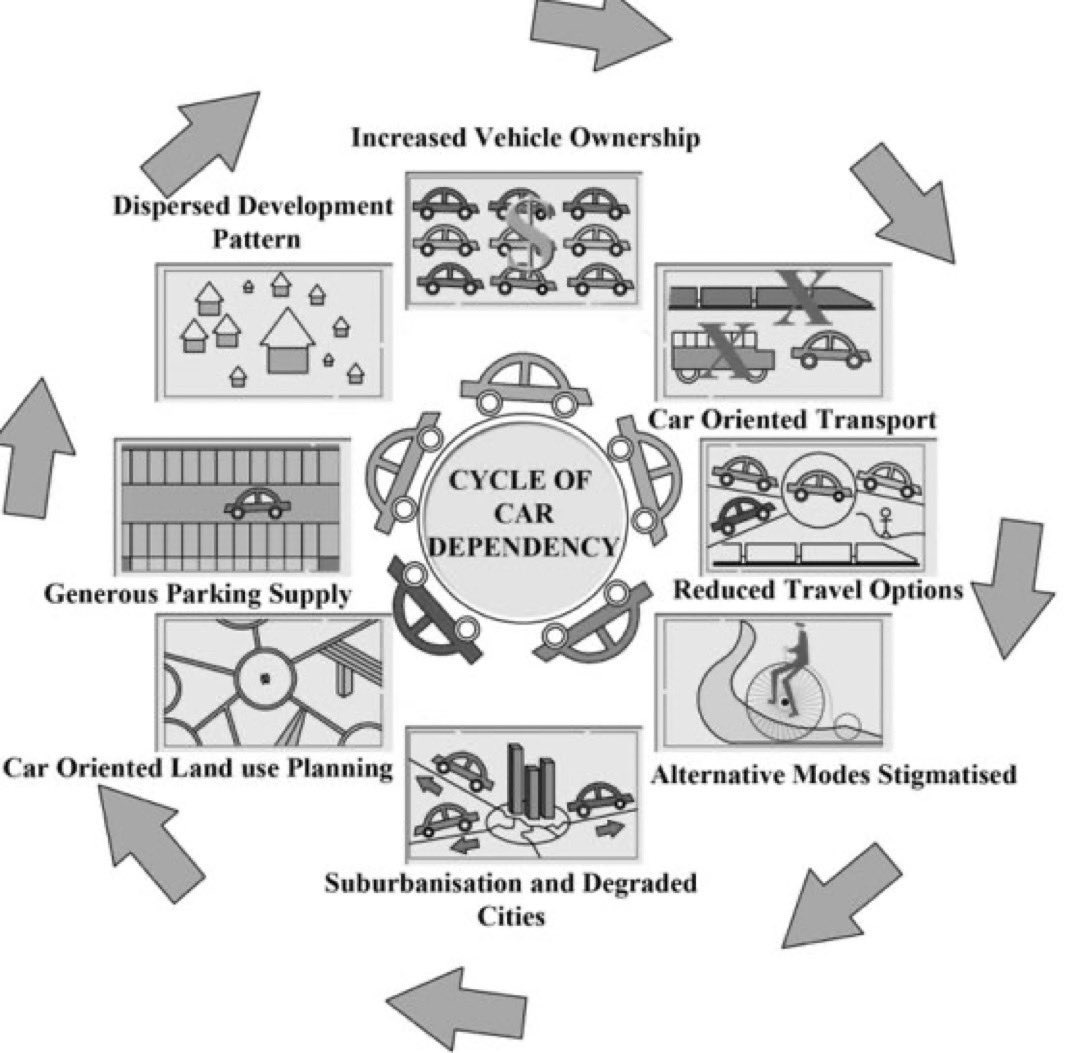 Neighborhoods where people can walk, roll, bike, or use transit for most of their day-to-day trips have some of the lowest per-capita emissions in America, while sprawling exurban places have some of the highest per-capita emissions. Because of this, one of the most important jobs for the climate change mitigation agenda at the city and regional level has to do with shifting more of the new housing that’s built in the future toward walkable urban places with existing transit infrastructure, and away from greenfield sites on the exurban fringes of metro areas. 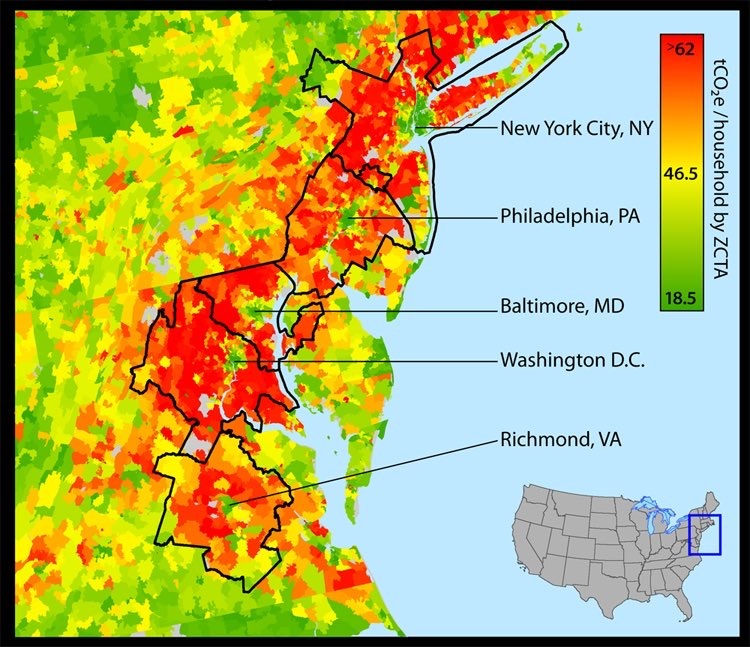 That’ll require significant reforms to the land use and transportation policy status quo at the state and local level, and near the top of the list of the most effective policies that could help accomplish this is ending legal mandates for off-street parking in new or renovated buildings.

Returning to the EV charger topic, while it might be tempting to elected officials to try and rely on private developments to build out an EV charging and parking network as part of new private buildings, the much higher-level environmental priority is reducing the amount of space devoted to car storage in general in new buildings, whether they're electric or gas-powered. While increasing EV adoption may be the highest policy priority in the suburbs, the highest priority in the city is still cutting car mode share, and shifting more trips to transit, walking, and biking.

Additionally, the idea of spending scarce capital budget dollars on parking garages or other facilities to supply public EV charging infrastructure deserves a low ranking on the environmental priority list. The best green transportation infrastructure projects in the city and region are all public transit infrastructure and active transportation projects, and they all need more local funding. Whether it’s modern trolleys, new bus-priority corridors, more frequent regional rail service, the Spring Garden Greenway, or King of Prussia Rail, or even a lot of smaller infrastructure projects, these are all going to be higher-ranking from an environmental standpoint than even the best EV parking garage, and it would be a mistake to reprioritize any capital budget spending away from these.

On the public streets, bus lanes and bike lanes deserve to be the highest-order priority from a climate mitigation perspective, and on-street charging also isn’t a perfect solution from that standpoint, but outside of a minority of streets where bus and bike priority could conceivably win out, it’s also not realistic to think that the city will ever be converting all that many parking lanes to other uses en masse. The vast majority of curb parking lanes out there today will still be curb parking lanes for as long as any of us will be alive. All that curb parking adds up to a truly shocking amount of public land devoted to private car storage, which equates to a landmass about the size of Center City. Because we’ve already given the bulk of this public land over to parking uses more or less permanently, this should really be the system to absorb the majority of the new EV parking that’s needed.

Solving the problem at the curb is going to be politically challenging under any circumstances, but the Mayor and City Council should look at what their options are for making the curb parking version of EV charging less private, and more public-serving, when this issue eventually gets revisited, hopefully soon. Figuring out how to get more publicly-owned charging stations on the public curb is a key piece of this, but so is allowing individuals to get electric charging spots close to home on a timetable faster than the city's. The city could require property owners who pay to install their own systems on the curb to let others use their electricity, and the city should also charge people more for the semi-private use of the space than $150 a year. Off-street privately-rented parking spaces in many rowhouse neighborhoods go for $200-300 a month or sometimes more, so elected officials should consider what a semi-private curb space is really worth.

The options for mass adoption of electric vehicles available to us in a city with a built environment like Philadelphia's are all going to have some major problems, and the trick to making good decisions will be keeping our environmental and capital budget priorities at the top of mind, and not pulling the plug after the first whiff of parking controversy.