How Do We Know Whether a Primary Will Be Competitive?

Political scientists use Partisan Voting Index scores to estimate how competitive different districts will be in races between Democrats and Republicans, but how do you judge competitiveness in a primary, when everybody has the same party label? A new tool from the Sixty-Six Wards blog lets users visualize election data in new ways that can provide some interesting insights about primary dynamics in different Philadelphia districts.

When people try to assess the potential competitiveness of different downballot districts for state legislative seats or U.S. Congress, they often use precinct-level election data from the most recent Presidential election to reconstruct how the opposing candidates performed within those district boundaries.

An example of this would be to look at the difference between Donald Trump and Hillary Clinton's results from 2016 within the 170th House District in Northeast Philadelphia, currently held by Republican Martina White, which Clinton narrowly won 49.2% to 48.3%. The close win for Clinton leads Democrats to believe White is potentially vulnerable if enough 2016 Clinton voters could be mobilized to support a down-ballot Democratic challenger for the state House in 2020.

A new mapping tool in the Sixty-Six Wards blog's Ward Portal now makes it much easier to visualize this kind of information, but for many more kinds of elections and candidates besides just Presidential elections—something that could especially help to increase our understanding of primary election dynamics in different City Council and state legislative districts.

For a general election example, see the 2016 Presidential results within the 170th House District at the top of the map: 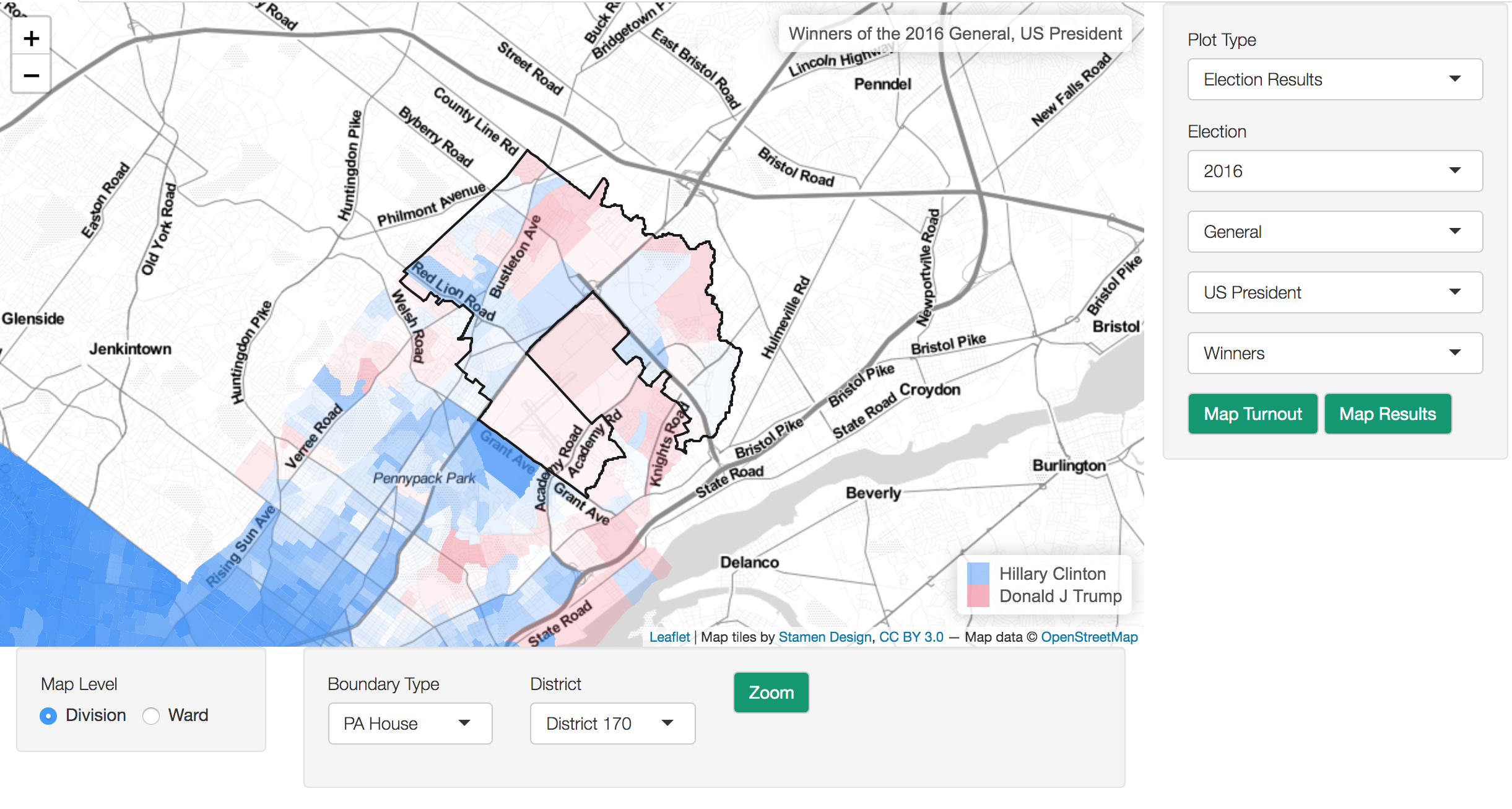 To view different election results within the various districts, just select the election year and office on the right-hand side, and then choose the Boundary Type at the bottom to zoom in on the district you want to view the results for. The ability to view and manipulate a spreadsheet with these results in the Ward Tables section of the portal would be another really useful addition in the future, but the visualization alone is helpful for understanding which precincts of the 170th district where White and a potential Democratic candidate would each want to try and drive up voter turnout.

Competitiveness gets a lot trickier to gauge in primaries, where knowing the Cook Partisan Voting Index score for the district doesn't provide any insight into what type of Democrat or what type of Republican party primary voters are most likely to prefer. For this, you need to make more of an educated guess based on other factors like demographics and the past performance of candidates with a similar profile.

This is where the Ward Portal is most interesting, especially since we have a few recent examples of signifier elections—most notably the 2019 City Commissioner primary—where the results really reveal the preferences of different groups of Democratic voters in a more fine-grained way that could be predictive for other elections.

The 2019 Commissioner primary was a multi-way race between incumbent Democrat Lisa Deeley and seven other candidates for the two majority party seats, one of which was being vacated by Anthony Clark. The Democratic City Committee endorsees were Deeley and Omar Sabir, while Kahlil Williams, and to a lesser extent Jen Devor, were the clear favorites of "liberal wards," to use Bob Brady's terminology. Marwan Kredie and Luigi Borda also had pockets of strength with communities they had strong connections with. Deely and Sabir won the primary, but the results provided an usually clear breakdown of the various camps within the Philadelphia Democratic Party: 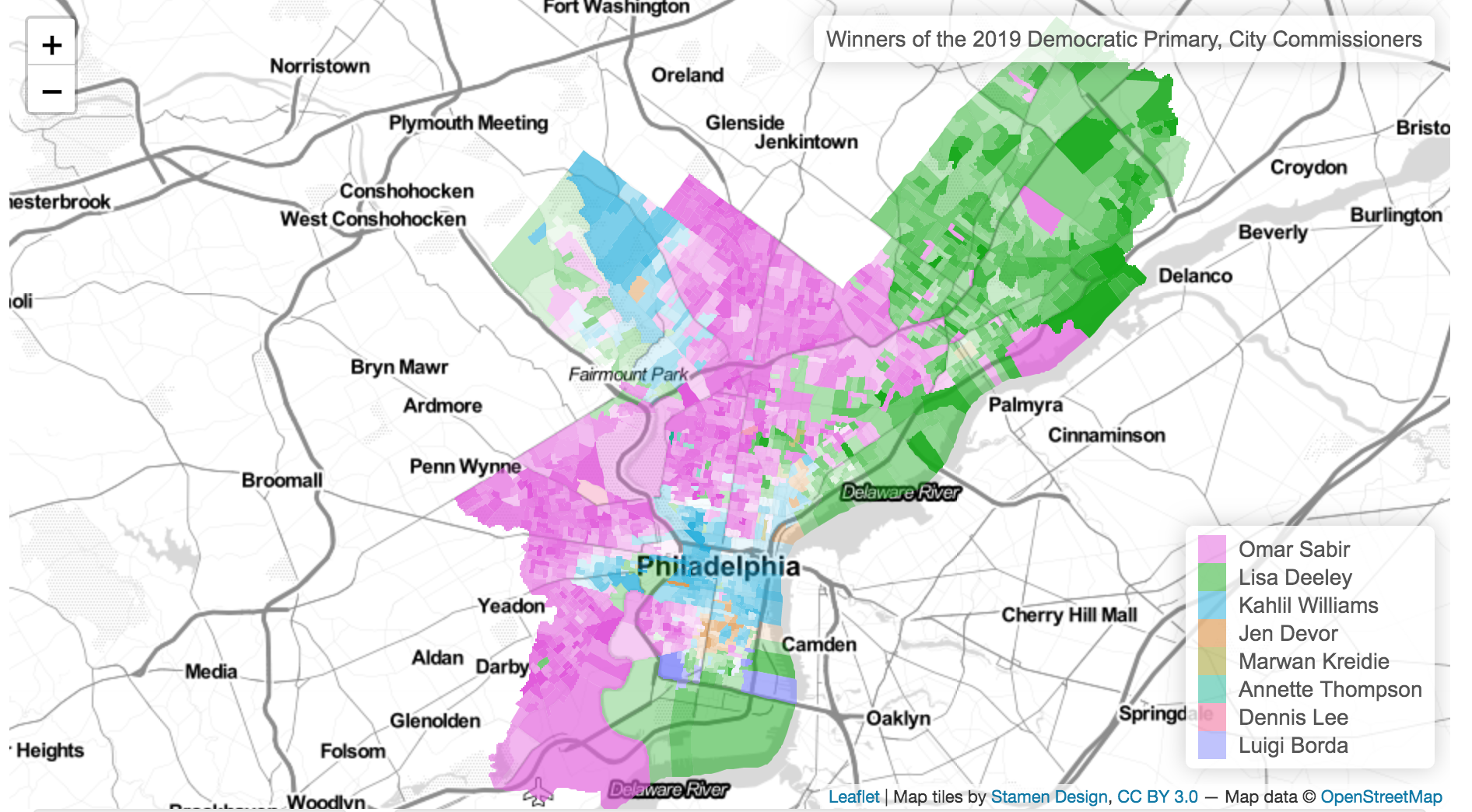 Viewing these citywide results within different down-ballot districts yields some interesting insights into the primary voting patterns within other districts. For example, mapping the 1st Senate District, held by Larry Farnese, onto the 2019 Commissioner vote shows both a lot of overall support for Kahlil Williams, and a heavy concentration of the primary vote in the same places that supported Williams. To the extent that Farnese is viewed as a more traditional Party figure in a similar political camp as Deeley, a candidate who was able to appeal to Williams's voters could be competitive.

The first image is a map of the vote breakdown in the 2019 Commissioner primary, and the second image shows the turnout map. 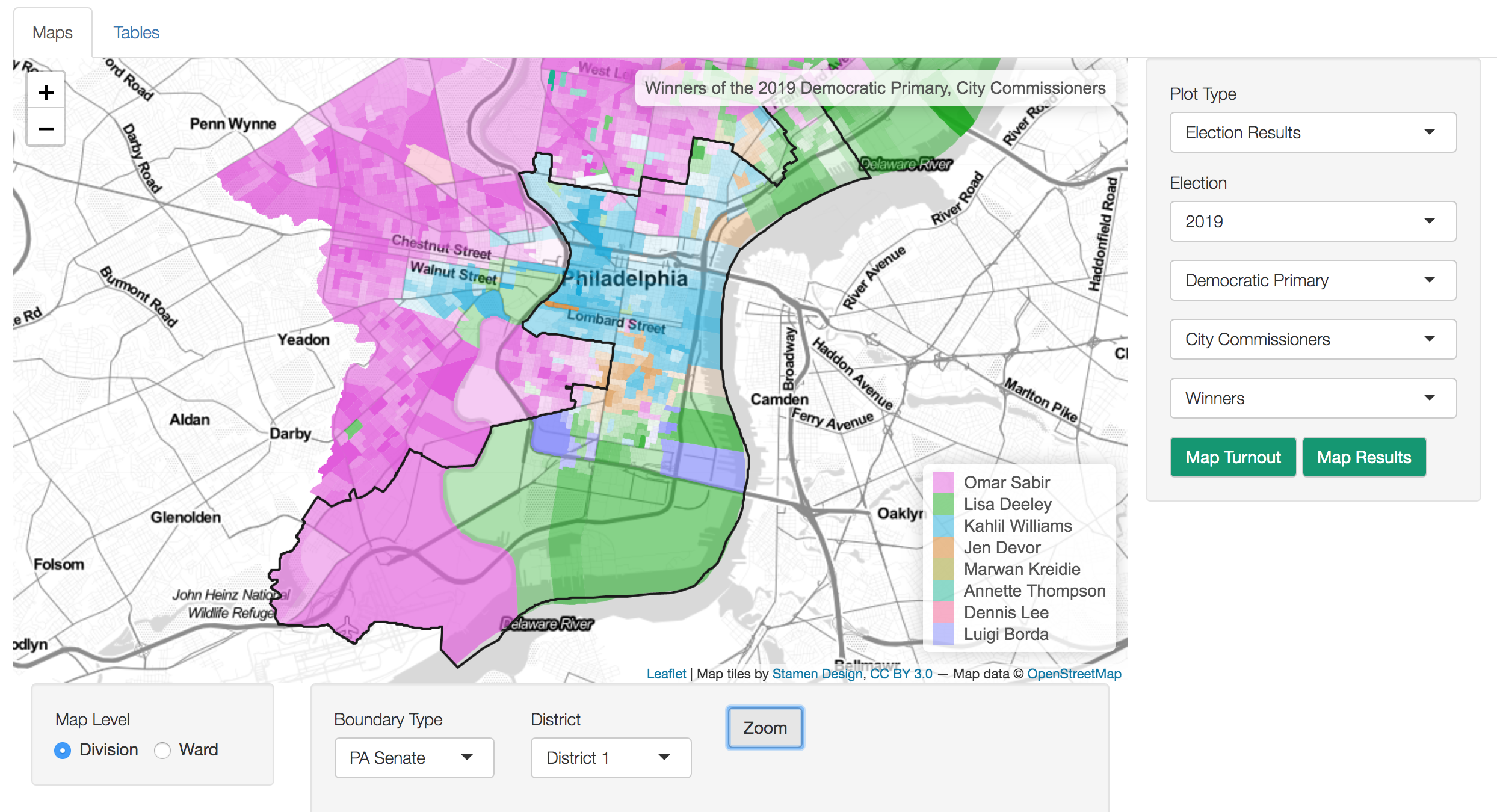 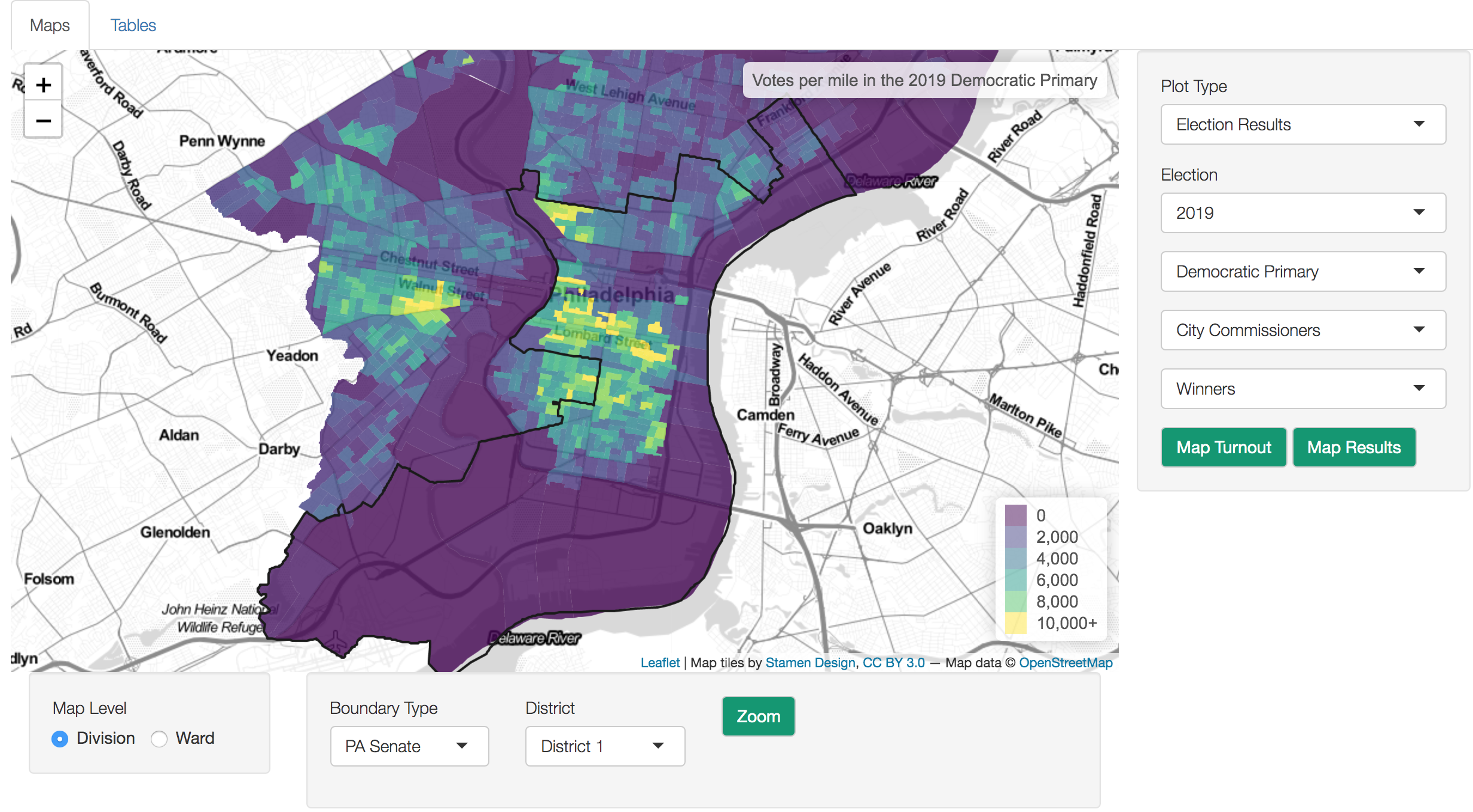 The 175th District is the other 2020 primary where a candidate able to appeal to Kahlil Williams voters could be competitive. In the 175th District, the late Rep. Mike O'Brien's chief of staff Mary Isaacson was hastily nominated by ward leaders as the replacement candidate after Rep. O'Brien unexpectedly passed away between the primary and the general election in 2018, and in 2020 Isaacson be running in a primary for the first time for this seat. Ceasefire PA staffer Jeff Dempsey has been spotted knocking doors and sending postcards to voters already (I live in the district and received one) and there are some other names rumored to be mulling a run for the 175th as well, which covers eastern Center City and the Riverwards neighborhoods. 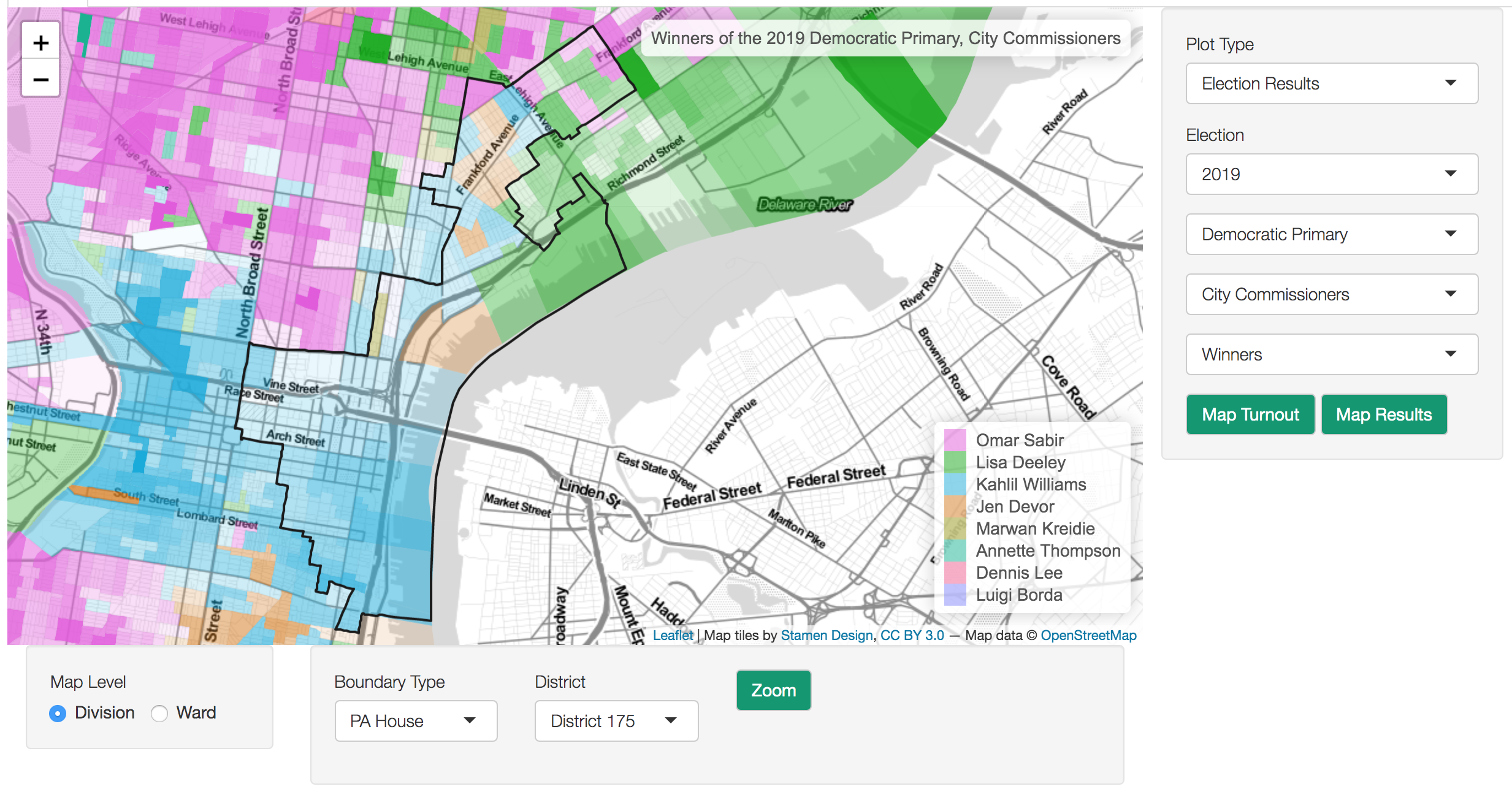 Another interesting barometer race to look at when considering in-district dynamics within state House districts is the 3rd District Council race, where Jamie Gauthier defeated Jannie Blackwell in the primary this spring.

The 188th District is nested entirely within the 3rd Council District, and contains the eastern portions which were Gauthier's strongest base districts. The district has been represented by Rep. Jim Roebuck since 1985, who is by most accounts still very well-liked, despite having been in the seat for such a long time. With the winds of change in the air though, this is shaping up to be a competitive primary, with two challengers already having registered fundraising pages on Act Blue—Kehinde Whetstone and Rick Krajewski—and others said to be looking at getting in as well.

While it seems unlikely that there would be a 1:1 map of Gauthier voters to Roebuck challenger voters, this is still the most change-oriented electorate in West Philadelphia, and a challenger could potentially win with much less support than the double-digit margins Gauthier won by in the eastern wards. The other stronger change divisions that went for Gauthier but live outside the 188th state House District aren't really concentrated anywhere else, and are split between nearby districts held by Reps Donna Bullock, Morgan Cephas, and Movita Johnson-Harrell—all of whom are also newer lawmakers.

Another state elected official rumored to be retiring soon is Rep. Rosita Youngblood of the 198th District, which includes Germantown. This district didn't have a competitive City Council primary, and Omar Sabir was the top vote-getter in all but a handful of divisions, so the City Commissioner primary isn't as good of a barometer election as it is in some of the South Philly and Riverwards districts. The more interesting citywide election to look at here to get a sense of internal House District dynamics is the Sheriff primary between disgraced Sheriff Jewell Williams, primary winner Rochelle Bilal, and Malika Rahman and Larry King Sr.

In the Sheriff primary, the challenger votes and incumbent vote were much more split than in the Commissioners race, so this may be a good proxy for the places that might be competitive for a non-machine-backed candidate in the event that the 198th District has an open primary in 2020.

Visit the Ward Portal to try out this tool, and share any other interesting observations in the comments.