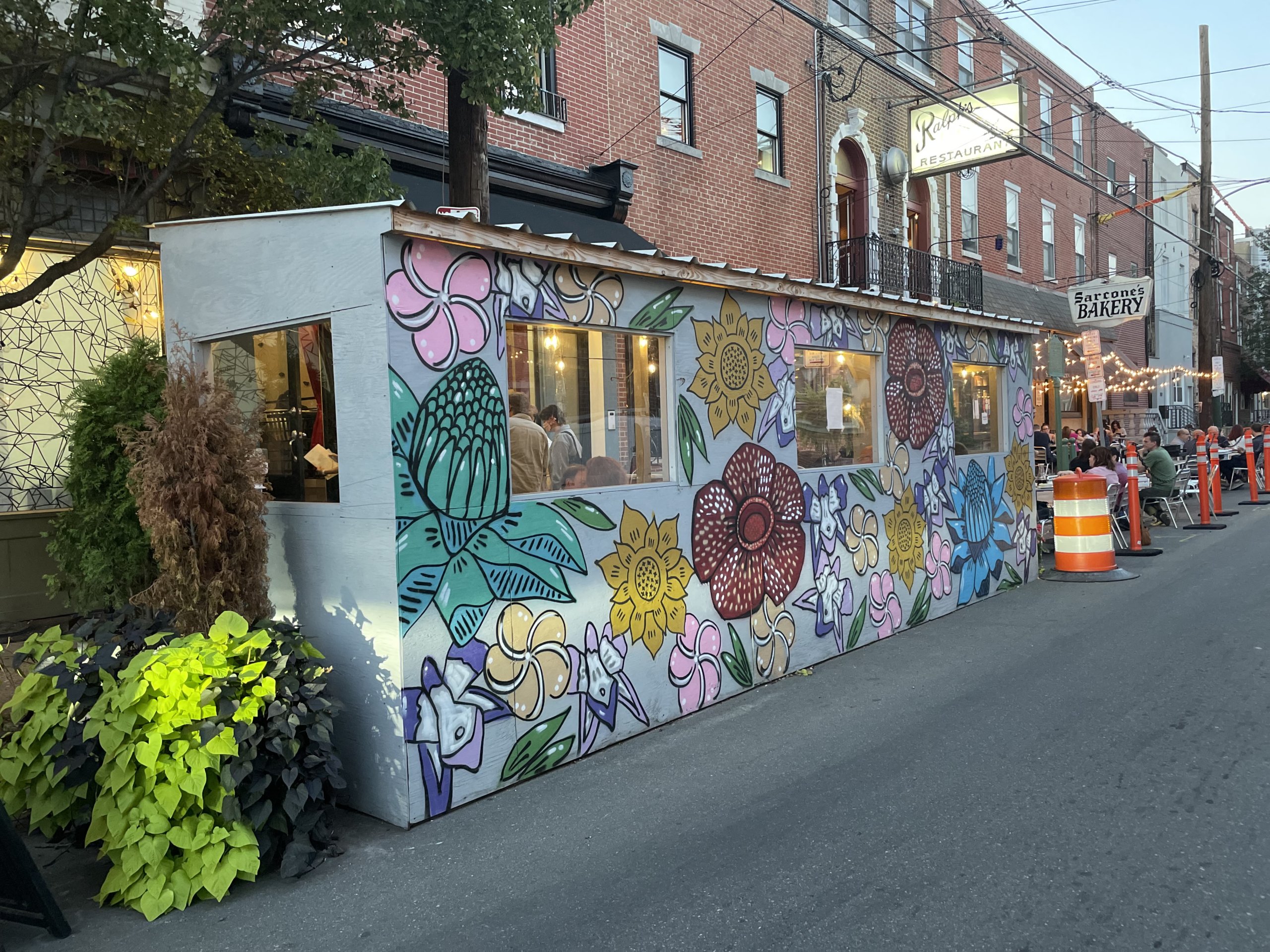 (Kalaya's streetery will have to be taken down if Council doesn't act. | Photo: Metro Philly)

City Council is about to pass a bill legalizing “streeteries” and critically, it would also codify the much easier pandemic-era process for creating new outdoor dining stalls moving forward, albeit in a very limited set of places.

Streeteries are the outdoor eateries that many restaurants and establishments used to move their seating outside during the pandemic, which were enabled by some smart policy changes by the Mayor's office and City Council that temporarily drastically cut the permitting time for both sidewalk cafe seating and dining stalls in the parking lanes. We’ve written in the past about this permitting reform success story, and some lessons going forward.

The good news is that Council does appear to be taking some action to make those permitting reform successes permanent, albeit within a very confined scope for now.

Within those areas of the city that the pending bill would impact, City Council really arrived at a good compromise on the details. It would allow for many streetery structures to remain indefinitely, while mostly keeping in place the easy permitting process to create new ones. At the same time, Council introduced more quality controls for ADA accessibility, crosswalk and bike lane blockages, and other common-sense rules. They also avoided the disastrous idea of putting every single streetery up for a public meeting with the local Registered Community Organization that some members were pushing.

Councilmember Allan Domb’s office deserves particular credit for the legislation and the coalition-building work that brought it to this point, which included the PA Restaurant and Lodging Association, the nascent BID Alliance of Business Improvement Districts, the Recovery Streets coalition of mobility and environmental advocacy groups, and staff members at the Commerce and Streets Departments.

These groups had pushed for a citywide policy for sidewalk cafes and outdoor dining in the Right-of-Way, which was in the end bargained down by Council President Darrell Clarke, who saw the citywide rules as a threat to the power of Councilmanic Prerogative—the unwritten tradition where District Councilmembers are accorded absolute power over district-level decisions by the other members. Up until the pandemic, Council discretion was the law of the land, with cafe seating requiring a full Council ordinance, and a parklet in a parking space requiring expensive insurance requirements and a drawn-out approval process.

Clarke and allies insisted that instead of passing citywide rules that would apply equally to everyone, there should be special carve-outs with only certain areas allowing permanent streeteries and an easier “by-right” permitting process. The carved-out areas would be selected by District Councilmembers, and would include Center City, some Business Improvement Districts, and then a few other corridors selected by members. Admirably, 3rd District Councilmember Jamie Gauthier took a noble stand against the nonsense by opting in the entire 3rd District. Gauthier’s perspective was that the 3rd District has so many more important problems that she would rather spend time on than preparing outdoor seating ordinances. That could certainly apply to a lot of other Council districts too, but other Council offices seem to have a bottomless appetite for this kind of extreme micromanagement.

Data scientist Tyler Tran found that the areas where streeteries would be permitted by-right under the legislation were much whiter and weather than the city as a whole, which was only balanced out by Councilmember Gauthier's decision to include the entire 3rd District. 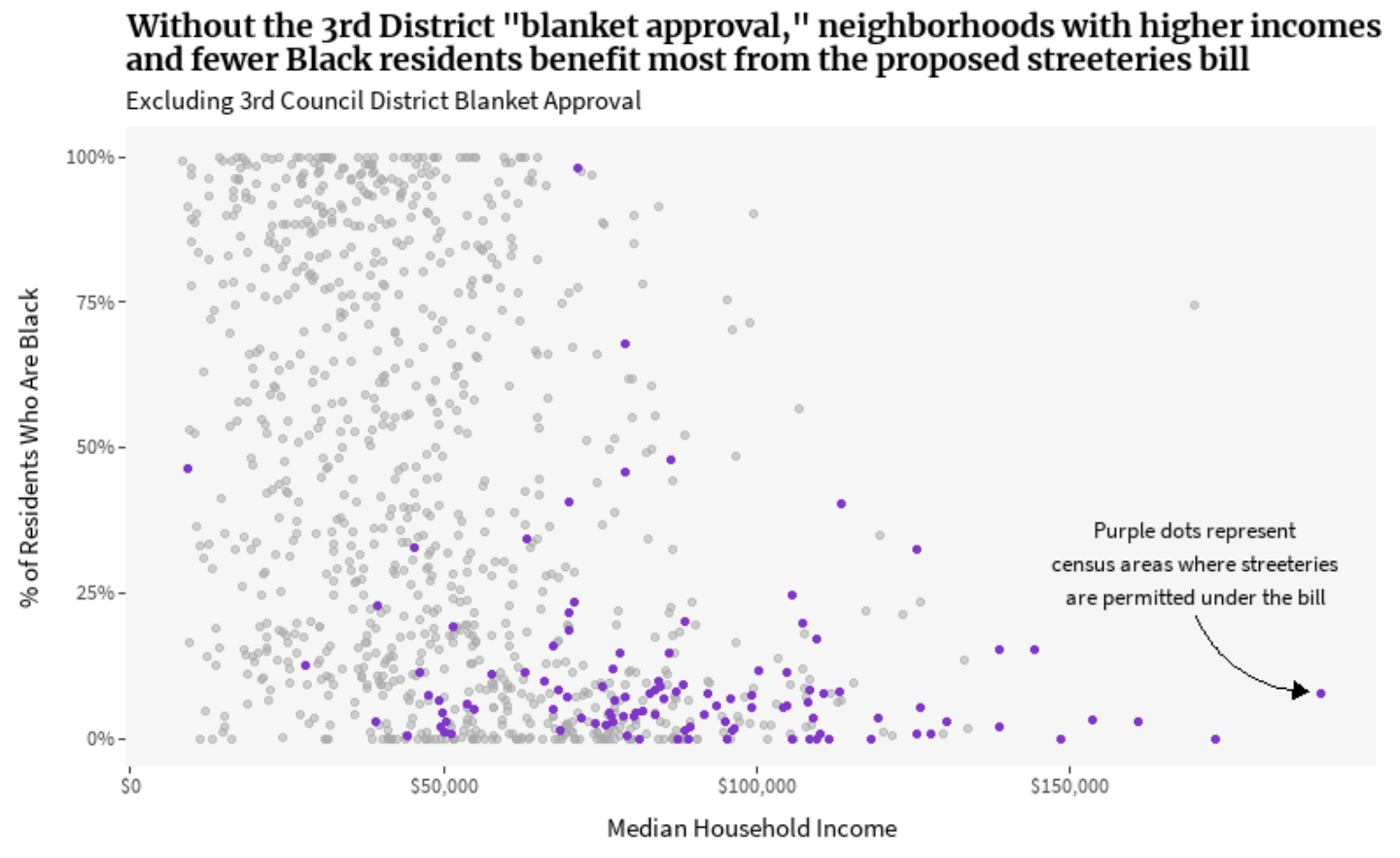 Other members were a lot stingier about where to apply the improved permitting process. Aaron Bauman, a software engineer and volunteer with 5th Square, the urbanist advocacy group, published a 'Streetery Losers' map this week showing exactly which businesses would lose out from these changes. He spoke with Howard Monroe at CBS Philly this week about the map, which showed more than 250 restaurants would have to demolish their current streeteries by the end of the year.

Take a look at the map and you'll see plenty of restaurants that are being left out of the improved rules despite being less than a block or two away from a boundary. It's arbitrary spot-regulation of the worst kind.

2nd District Councilmember Kenyatta Johnson left out corridors like Point Breeze Ave and West Passyunk, but did opt to include a bizarre two-block strip of South Broad below South Street that mainly only has drive-through style restaurants on it. Restaurants that are hovering right around the boundaries of the Northern Liberties and Fishtown BIDs get left out. There are some other oddities too, like 9th District Councilmember Cherelle Parker only including a single block-and-a-half strip of Wadsworth Ave with a single restaurant on it, for the entire 9th District. 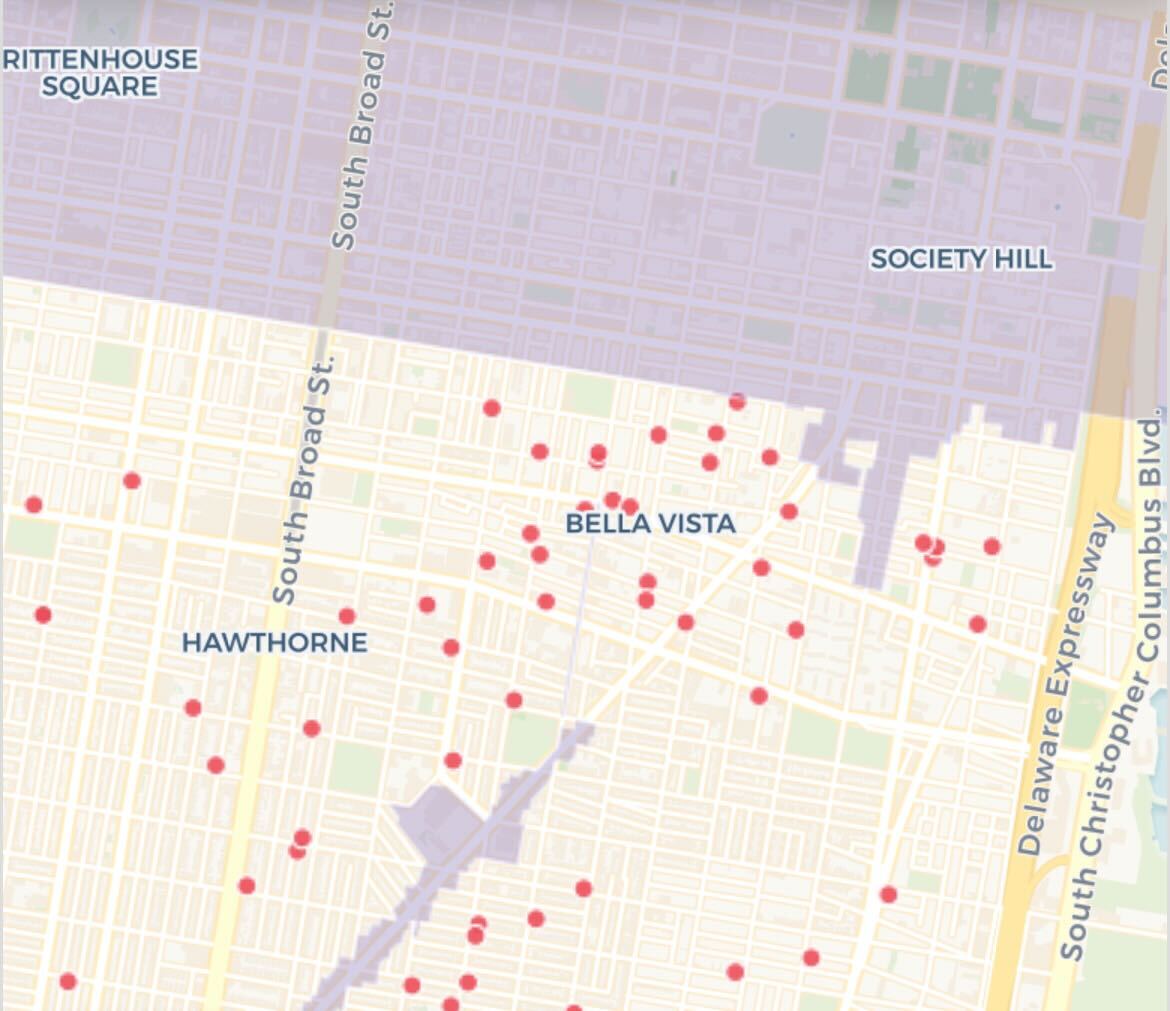 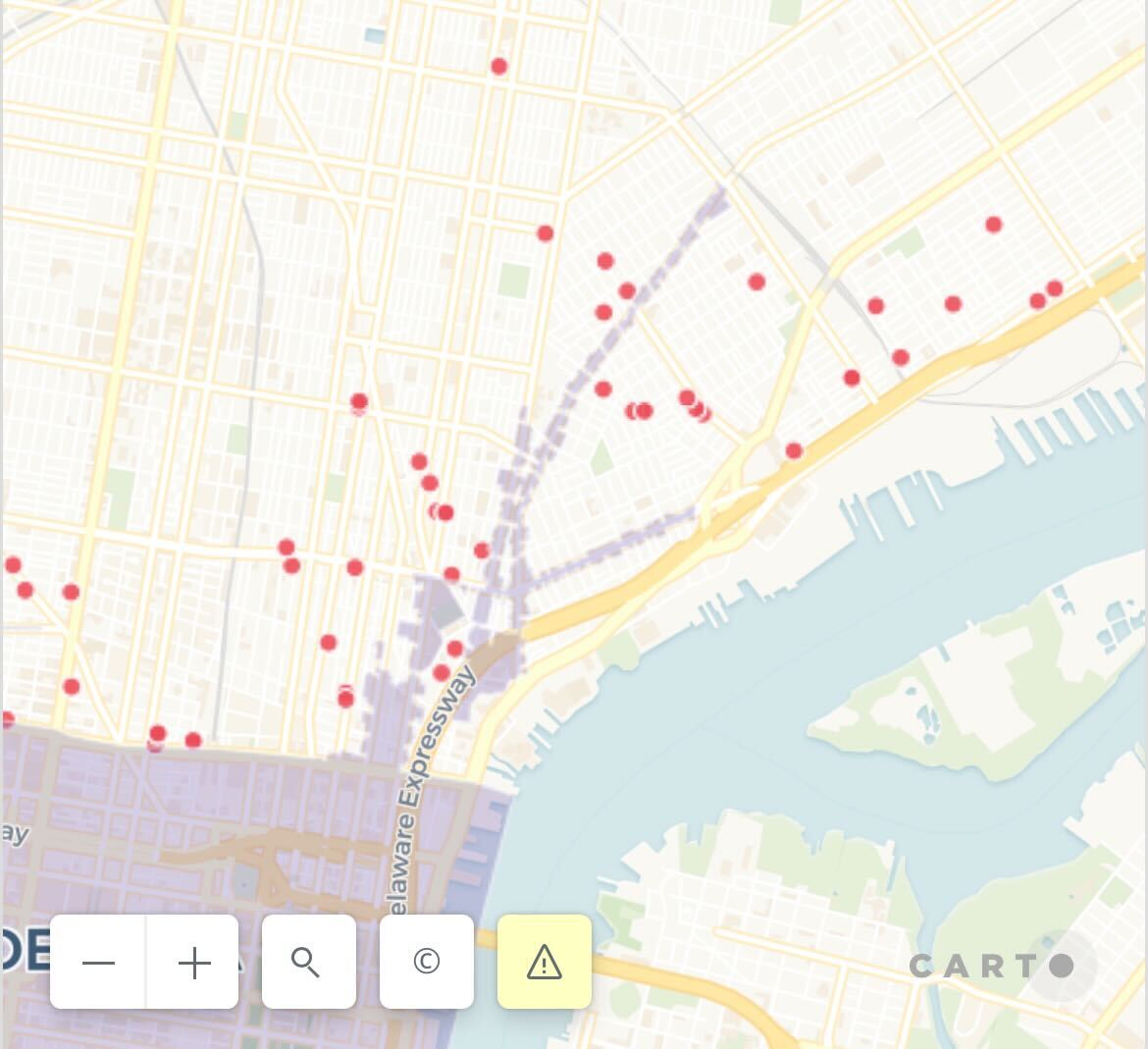 This really underscores the folly of the Overlay Mania trend that’s become District Council members’ favorite way of doing land use legislation, particularly during this term. By running streetery legalization and permit changes through special carve-outs, City Council is actively choosing about 250 very specific losers with this legislation, instead of just treating everybody equally and applying the same rules to everyone.

That isn't a good reason not to pass the bill. But it is a reason to at least offer the rest of the existing businesses the opportunity to carry on if they comply with the other criteria in the bill for accessibility and safety. Click through for the full list of businesses that will be out of luck come December 31st if Council takes no further action beyond the pending legislation.

One aspect of all this that shouldn’t be missed, and is arguably an even bigger deal, is that Council President Clarke wants to have almost all sidewalk cafe seating revert to having a Council ordinance requirement after a one-year extension of those rules. Councilmember Domb had proposed leaving COVID-era processes in place for that as well, but that bill was scuttled in favor of Clarke's proposal for an extension and no permanent process changes.

Under the old process, a single cafe seating application could take months or even a year to process, whereas the current COVID-era permitting system has only a 3-day turnaround. It isn't that there were no hiccups or issues that came up while doing it this way, but things have been mostly fine and there's no good reason to turn back now. What some fans of the old way are hoping will happen here though is that there'll be less urgency around extending emergency permitting rules a year from now, and the COVID-era cafe seating process will quietly sunset without anybody noticing. You can count on one thing though: we'll remember!

For more Philadelphia politics and policy news and analysis, make sure to sign up for our weekly email newsletter