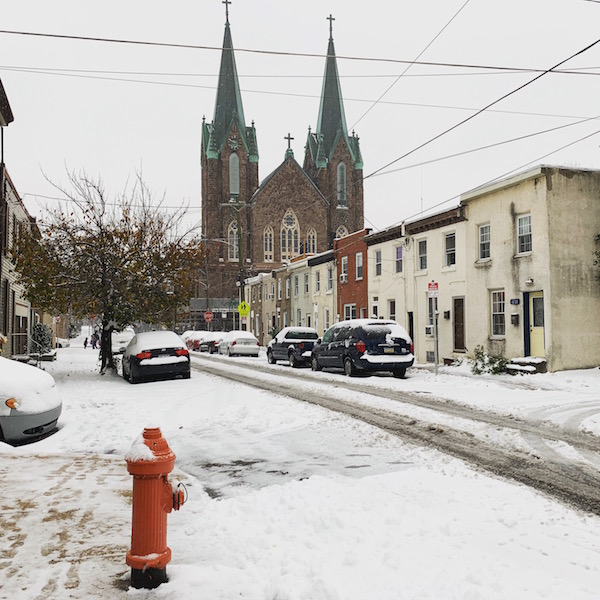 It's hyper-local story that nonetheless holds some important citywide lessons about the intersection of historic preservation and zoning politics, and it's probably one of the best counterpoints in recent history to those who want to see Councilmanic Prerogative completely eliminated.

This story is back in the news because on Thursday, a big chunk of stone fell off the building, and L+I had to shut down the street. St. Laurentius's school day is cancelled Friday as a result. The redevelopment plan for the building is still tied up in a frivolous appeal with no end in sight, leaving 5th District Councilman and Council President Darrell Clarke as the only person with the power to move it forward.

The backstory of this saga is long and winding so read the prior post to get up to speed. The short version is that St. Laurentius, the city's oldest Polish Roman Catholic church, is falling apart and was successfully designated historic on the local register years ago. It's urgently at risk for condemnation by L+I and has had fencing up around it for several years now so that pieces of the building don't fall off onto passers-by.

Leo Voloshin, a guy from the neighborhood who has some prior development experience and wanted to see the structure saved, emerged with a plan to redevelop it into apartments, and lined up some investors. But the plan he proposed was very unpopular with some neighbors and former parishioners who formed a group called the Faithful Laurentians to oppose the apartment conversion. The building is incorrectly zoned RSA-5, allowing only one single-family dwelling by-right on the property, and it required a zoning variance to build multiple dwellings inside.

Despite a heated public meeting about the plan where most attendees voted against it, the Zoning Board of Adjustment approved the variance request—a true hardship if there ever was one—and then the Faithful Laurentians group filed appeal after dubious appeal, tying the plan up in court indefinitely. The merits of their case are incredibly weak, and the initial group has largely fallen into inactivity, but the attorney filing the appeals is relentless and can't be talked out of filing endless appeals.

As we wrote previously, there is a way to break out of this cycle, and that's for 5th District Council member Darrell Clarke to use his Councilmanic Prerogative powers just this once to rezone the property for apartments and allow the apartment conversion plan to proceed by-right. The developer would withdraw the current application, the lawsuit would go away, and then he would resubmit the exact same plan and get an over-the-counter permit from L+I to build it by-right. According to the developer, there's likely no off-the-shelf zoning category that doesn't trigger at least one type of variance, but in the past other Councilmembers have passed specific rezoning bills contoured to the bespoke needs of difficult properties, like the Royal Theater on South Street.

There are lots of good reasons why people don't like one-off legislative rezonings like this, but St. Laurentius is truly a 'Break Glass In Case of Emergency' situation, and is exactly the type of case that defenders of Councilmanic Prerogative use to justify its existence. While it's true that the issue unfolding here was at least somewhat foreseeable and could have been corrected further upstream during the neighborhood-wide zoning remapping a few years ago, what's done is done, and there needs to be some nimbleness baked into the process for fixing mistakes. Who believes Council and the Planning Commission are always going to get everything exactly right on the first pass? Clarke alone has the power to break the logjam, and he should use it to save an important neighborhood landmark from a pointless and avoidable demolition.

The recently-completed Historic Preservation Task Force recommendations released in December provide some additional justification for this position, as they recommended that Council fix the zoning code to allow by-right residential and commercial conversions of historic properties, as long as the Historical Commission approves. Here's what the passage says, from their final recommendations:

By-Right Zoning for Special Purpose Historic Buildings Certain types of historic buildings, such as churches, theaters or gymnasiums, are very difficult to adapt to other uses, and are often not zoned to permit residential or commercial uses. The expense of rezoning a special purpose building, combined with the physical challenges inherent in such a building, limits the ability and willingness of a developer to attempt reuse of the building.

Proposed Change: We propose that the City amend the zoning code to allow any use in these buildings that is permitted in CMX1, CMX2, CMX 2.5, CMX 3 (and perhaps other districts) zoning areas, regardless of underlying zoning of the building, if the developer commits to historically rehabilitating the building. By right zoning removes uncertainty in the development process and makes it more likely that an owner would seek to rehabilitate the existing building instead of demolishing it and replacing with a new building. The byright building rehabilitation would still require approval from the Historical Commission.

They're talking about a citywide change that allows this in all instances for certain types of historic properties, churches included, and that's a legitimately great idea that would probably result in lots of easy adaptive reuse conversions. But it's not a bill yet, and meanwhile, lots of historic properties are falling down right now that Councilmembers could save with more circumscribed bills right away.

To get around any spot-zoning recriminations in this case, one way forward would be for Clarke to rezone a whole tranche of historic properties in the 5th District to allow for by-right residential and commercial reuse. There may even be some historic preservation experts on his staff in City Council who could easily supply him with a list of the 15-20 top at-risk properties for a Historic Reuse Pilot Bill that happens to include St. Laurentius.

Not only would this save the former church from an "imminently dangerous" demolition order from L&I, it would also save everybody a lot of headaches dealing with the future St. Laurentius-style cases that are certain to crop up in the future. And if there's anything this whole saga shows, it's that the right time to start thinking about the next act for historic buildings with tenuous tenants is long before they're raining stone chunks on the sidewalk.