How Philly Stacks Up on New "Ease of Doing Business" Rankings

A new study from Arizona State University attempts to compare the ease of doing business in large North American cities across six different metrics, and they find that in the U.S., Philadelphia is the 12th most difficult place to start a business, coming in 59th out of 66 U.S. cities. Compared to all big cities in North America, we were closer to the middle of the pack. And while you have to take these kinds of rankings with a grain of salt, since they couldn't possibly have captured the full context for all of these cities, they're still useful for highlighting some areas where we're further out of step nationally.

Here's what they say they're measuring and what their priors were in devising the rankings. The basic assumption is that a clear and simple rule-based process is best, and helps small- to medium-sized businesses.

"Doing Business North America (DBNA) is predicated on the idea that a well-functioning economy has good rules. For our purposes, the focus is on rules that enable domestic small- to medium-sized businesses to get started, locate an establishment, get electricity, and hire employees. The rules should also be clear about paying taxes and, if it comes to it, resolving insolvency. The ease of doing business in a location is higher when the rules are clear and the steps involved are few."

Some of the areas where Philadelphia ranks noticeably worse than other large cities are the categories for registering a property, paying taxes, and starting a business. 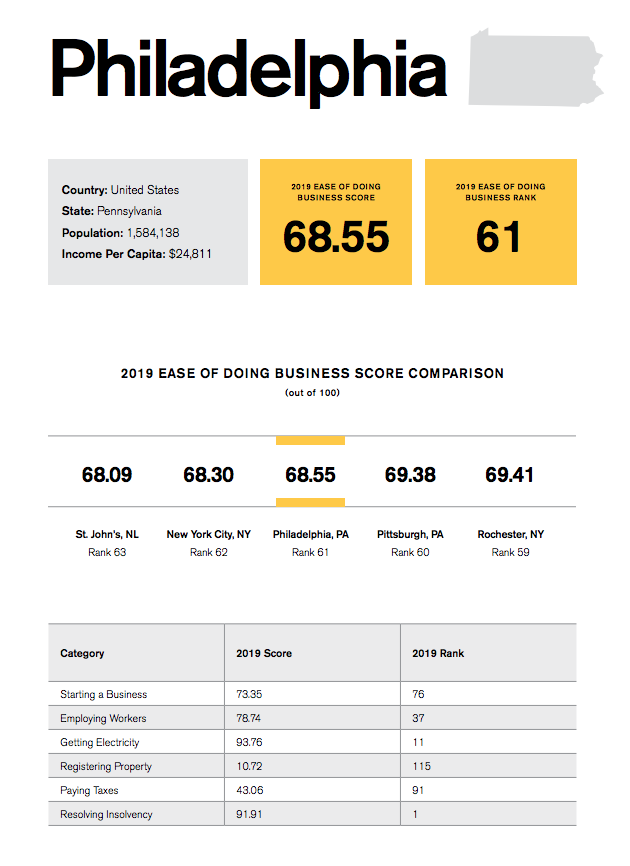 The way they measured the ease of starting a business was to count the number of procedures involved in filing, and the time this takes, and the costs incurred by delays:

A procedure is defined as any interaction of the company founder with external parties. Procedures that must be completed in the same building but in different offices or at different counters are counted as separate procedures. If the founder has to visit the same office several times for different sequential procedures, each is counted separately. The founder is assumed to complete all procedures themselves, unless the use of such a third party is mandated by law. If the services of professionals are required, procedures conducted by such professionals on behalf of the company are counted as separate procedures. Each electronic procedure is counted as a separate procedure. Only pre-incorporation procedures that are officially required or commonly done in practice for an entrepreneur to formally operate a business are recorded.

Procedures required for official correspondence or transactions with public agencies are also included. For example, if a company seal or stamp is required on official documents, such as tax declarations, obtaining the seal or stamp is counted. Similarly, if a company must open a bank account in order to complete any subsequent procedure, this transaction is included as a procedure.

On average, a new business in Philadelphia would need to take eight legal steps and spend around $720 to start. The median cost was $230 in required fees and costs per city, according to these findings, so Philadelphia is more than three times above the median.
The time costs associated with permitting and approvals are an overlooked area in the popular discussion about what Philadelphia can do to attract more jobs, which tends to be dominated by the tax policy conversation, but this is an area where the Commerce Department, City Council, and L+I deserve credit for trying to map all this out and streamline city processes the past couple years. It's hard to know what's come out of it yet, but these are live initiatives, and it's a positive sign in any case that there are some ongoing efforts at continuous improvement in service delivery.
One thing to note about the rankings is that they just looked at the baseline process that any business would have to go through, without diving into the process for specific industries that might need to undertake additional procedures like bars and restaurants, day cares, or home building, where getting approval from city government can be more unpredictable and discretionary.

L+I has been working to streamline their development review process, and City Councilmember Maria Quinones-Sanchez just announced a plan to allow applicants to pay more for an expedited process. The jury's still out on whether these specific changes would make a difference, but the most important thing is an ethos of continuous progress and a willingness to try different things based on feedback from the people using these processes.