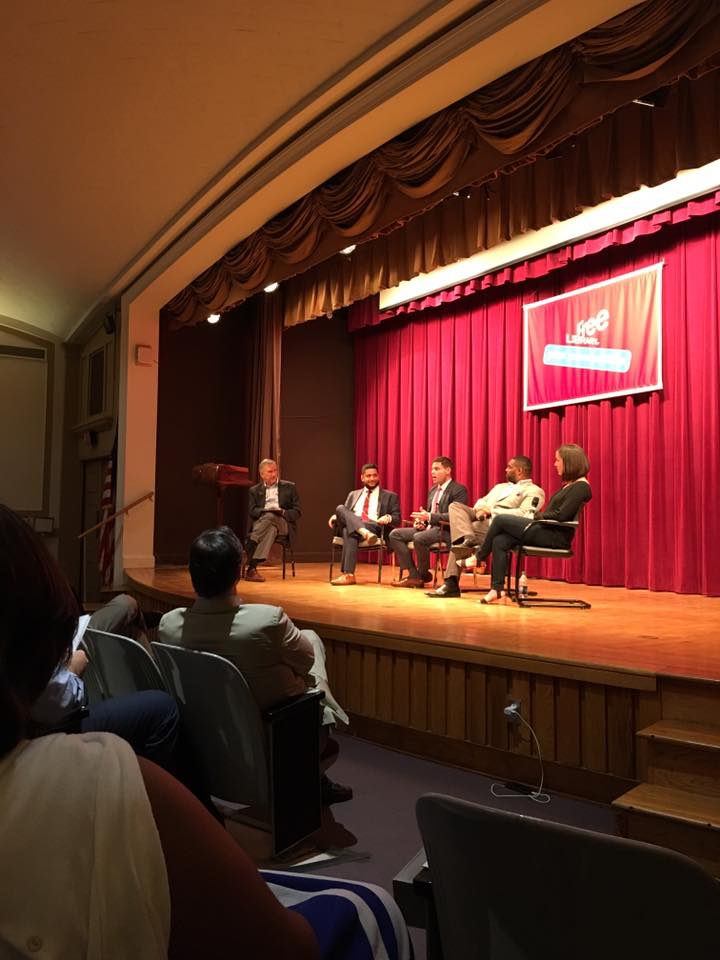 Speaking in front of a packed house in the Free Library auditorium Thursday evening, a group of Philadelphia's up-and-coming political leaders weighed in on the future of the local Democratic and Republican parties, and how institutions and the city's political culture will change as the younger generations move into more positions of influence.

The discussion, hosted by Philadelphia 3.0 and Committee of Seventy, and moderated by WHYY's Dave Davies, featured speakers Mara Kunin, the campaign manager for Rebecca Rhynhart, Dan Pearson, a former staffer for Republican City Commissioner Al Schmidt, Representative Jared Solomon (PA House District 202), and Omar Woodard, Executive Director of the Greenlight Fund. Woodard was recently in the news publicly mulling a primary challenge to Rep. Bob Brady of the 1st Congressional District, and chairman of Democratic City Committee, but didn't comment on this on the panel.

One theme of the discussion centered on the role of party machines, how relevant they still are, and how they might operate differently.

Dan Pearson offered a note of caution to those ready to dance on the grave of the Democratic machine, following recent upsets like Rebecca Rhynhart's 17-point win over party yes-man Alan Butkovitz in the Controller primary this spring. He pointed out that machines decline over decades, not overnight, and that the DCC didn't properly plan for the race—a mistake they might not make next time. The Republican machine, diminished though it is, still has enough juice to get people jobs and defend the two At-Large Council seats the City Charter reserves for non-majority party candidates.

And the wards will also continue to be a first stop for candidates in the pre-primary season, said Rep. Jared Solomon. Solomon, who unseated Mark Cohen, the city's longest-serving representative, said when he first ran in 2014, ward leaders wouldn't talk to him. But it was important to him to make those connections, because many committeepeople and ward leaders have been involved in local politics for decades, in some cases, and they are often important connectors in the community.

Solomon lost when he ran in 2014, but he ran successfully in 2016, and that year he received more ward support, which confirmed for him it was still important to make those connections.

To Omar Woodard, the purpose of the ward system is maximizing voter turnout every year, in order to grow Philadelphia's political clout in Harrisburg and Washington, and improve the representativeness of local government. Woodard argued that the ward system, at its best, can be a vehicle for transformative change in the city, and that we should fix it by leaning into it rather than trying to destroy it. He painted a picture of ward committees that are more relevant civic institutions in their communities that register and turn out voters, create opportunities for neighborhoods to meet candidates for office, and even get involved in policy formation at the local level.

Mara Kunin, who moved to Philadelphia temporarily from Washington, DC to join Rebecca Rhynhart's campaign, said that while Rhynhart received but one ward endorsement (Michael Nutter's 52nd ward) the experience of attending ward events was still valuable. Conversations with ward groups were a chance for Rhynhart to hone her campaign's message, and talk to people who were tuned into the Controller race months ahead of the typical primary voter.

Asked by Davies whether the ward system was simply too corrupt to become a force for good, Woodard framed the issue as a difference in attitude between those who see "politics as livelihood," and try to remain in office because it's likely the pinnacle of their professional life. He also drew a contrast between elected officials who still see their job as managing decline, with those interested in investing in and managing growth. The problem is more that people with the wrong priorities have taken over.

Pearson suggested that the parties can curb corruption by creating internal ethics rules for their organizations, and set terms for expelling bad actors. He argued that Philadelphia's excessively transactional politics is linked to the pyramid structure, whereby people opt to wait their turn, build rapport within the party, and climb the ladder of higher offices rather than break out and challenge incumbents. We won't see transformative change from people who have demonstrated that willingness to wait their turn, he said.

All of the panelists agreed that the more closed wards are missing an opportunity to train the next generation of political leaders. Woodard noted the importance of creating a structure that embraces the talent pool waiting to serve. A concrete step ward leaders could take is allowing the committeepeople to vote on candidate endorsements. In most wards in the city, ward leaders choose the candidates the ward will endorse, even though it's ultimately the committeepeople who are on the ballot and accountable to voters.

Woodard pointed out that very engaged committeepeople can have a lot of influence. He gave an example of a committee person he knows who held an event for a relatively small number of neighbors, and several prominent elected officials accepted her invite. The position is useful for strategically commanding attention from politicians for the local causes people care about.

For anyone looking to run for ward elections next year, or get more information, use the map at the link to find your division and then sign up to get involved.