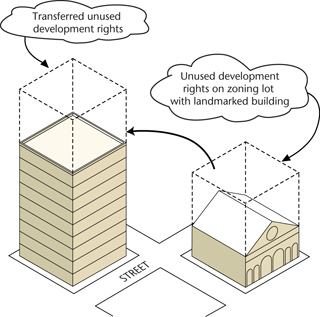 The recent saga over Toll Brothers' plans to build a residential tower on Jeweler's Row has invigorated Philadelphia's historic preservation movement, and touched off an interesting side debate about the alleged trade-offs between historic preservation and promoting sufficient housing growth.

In one telling, preserving short buildings in the central business district, like on Jeweler's Row, comes with an opportunity cost. We could have several hundred new units of housing if the buildings get replaced. Sansom Street is really close to the Market-Frankford Line and is right in the central business district. Every other factor besides Jeweler's Row being a unique and charming street points to high-rise mixed-use zoning being the most appropriate choice for that location.

On the other hand, many people rightly feel that Jeweler's Row is an important place in Philadelphia and argue that maintaining the character of the street has an intrinisic value.

But we don't really have to choose between building enough housing and preserving the city's architectural and historic inheritance, because Philadelphia actually has infinite space in the sky and development rights are transferable from property to property. There's no good reason why the total supply of development rights ever needs to shrink. Jake Blumgart's recent article on Jeweler's Row at PlanPhilly highlighted this concept briefly, but it's worth teasing out further.

The backstory is that Toll Brothers is using a wonky "unity of use" claim to basically transfer unused development rights from some of the shorter parcels on Jeweler's Row in order to build a taller tower, with the idea that there is a "unity of use" to the whole site.

"Essentially, Toll Brothers is purchasing the FAR from the four properties without purchasing the properties themselves. They argue that this esoteric idea is feasible because there will be a “unity of use”—a legal principal that allows multiple properties to be counted as one without lot consolidation—between the five parcels.

Members of the public criticized that arrangement at Tuesday’s CDR meeting, arguing that there is no transfer of development rights in the current zoning code and that the new height is of questionable legitimacy."

Preservationists who oppose the demolition of the Jeweler's Row buildings are arguing somewhat opportunistically that the zoning code has no transfer of development rights provision, and they're correct about that (though "unity of use" doesn't seem to require such a provision,) but outside of this specific case, it would be great for the preservation cause if there were.

Here's how it works. If you own a property in Philadelphia, you have some development rights (sometimes called "air rights" when referring to the developable air spaceover top of a property) which are spelled out in the zoning code. There are certain types of structures you can build "by-right" just by pulling a permit, and what you can build is determined by the zoning category the city has assigned to your property.

This is where the opportunity comes in: what if you could preserve Jeweler's Row by designating the structures as historic, but instead of destroying the unusued development rights in the process, put them in a "bank." Call it the Air Rights Bank. Development rights go into the bank, and then on the other side, Toll Brothers could buy those development rights from the bank to build taller than the zoning code allows on a different site.

It's easy to imagine a clever financing scheme where the Air Rights Bank collects fees on these kinds of transactions to purchase development rights from over-top of more historic properties all around the city.

This is all much more complicated in practice and there are a variety of approaches the city could take, but the basic idea is that there's no inherent reason why historic preservation needs to be in tension with growth, given the inexhaustible supply of "land" in the sky over Philadelphia.

Where would people be allowed to "cash in" the development rights?

This is the major hang-up, as there is always some local opposition to increased density, and particularly low-parking multifamily buildings. To work correctly, the rights would actually have to be exactly the same as the rights invoked when building a by-right project--not subject to local negotiation.

There's no single right answer as to where the development rights should be applied, but one intuitive option would be to piggyback on this idea from Councilmembers Blondell Reynolds-Brown and Bill Greenlee to encourage more housing growth around transit stations.

The Council members co-sponsored a bill this week (which we'll be digging into in a subsequent post) to add "transit-oriented development" zoning overlays to an unspecified number of transit station locations. The bill language hasn't been released yet, but the Inquirer is reporting the overlays would allow taller structures with less parking than is normally required within 500 feet of transit stations. Buildings could be required to have active ground-floor uses, and open-air parking lots would be restricted within the zones.

The goal is to make better use of Philly's underused transit network by increasing the number of dwellings with good transit access for those residents who don't care to own a car (and thus shouldn't have to pay for on-site parking.) Allowing developers to spend the development rights they purchase in these zones, which would already be targeted for more growth, would certainly dovetail with those goals.

Both policies would entail a heavy political lift, but it's at least possible to envision--if you squint--some vocal citywide constituencies like preservationists, developers, and transit advocates banding together on a win-win solution.