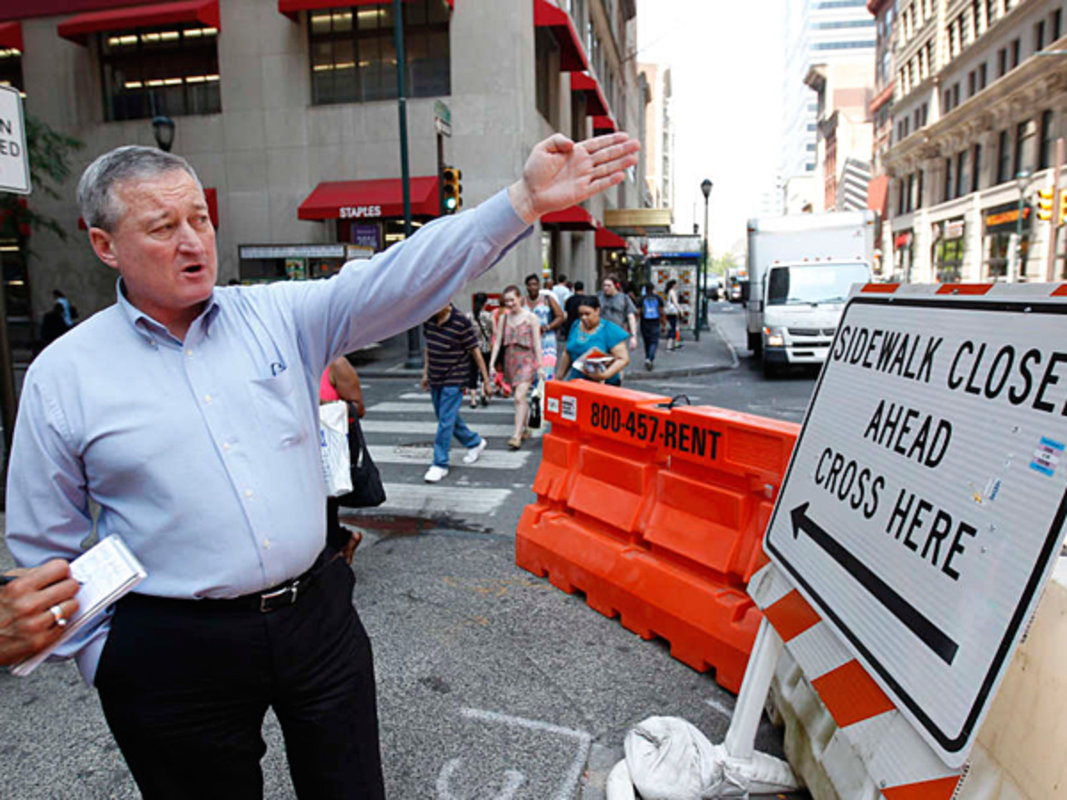 (He used to get it | Photo: Inquirer)

Ryan Briggs writes this week about a troubling trend that’s played out over the years since Philly passed its landmark Zoning Code Commission legislative package back in 2012, but which seems to be picking up steam as of late: the practice of creating random new zoning overlays with no relationship to the City’s comprehensive plan.

The main thing to know about zoning overlays is that they’re like a little patch of zoning on top of some other zoning.

Every parcel of land in the city is assigned a zoning category, which specifies some rules about what can be built there. These are the building blocks of the code, and City Councilmembers a lot of leverage over how to map them across their districts because of Councilmanic Prerogative. But City Council can also write some other rules to “overlay” on top of these base zoning rules, with the aim of achieving some specific policy ends.

Briggs notes that people come to support these overlays for a multitude of reasons, in richer and poorer neighborhoods alike, and while a lot of them have to do with classic zoning themes about exerting greater control over the kinds of buildings and people allowed into a neighborhood, just as often neighbors seem motivated by fixing problems that have nothing to do with zoning at all.

"Although the Strawberry Mansion overlay was nominally a response to gentrification fears, that district explicitly blocked the kinds of density bonuses that inclusionary zoning policies use to coax affordable housing out of private developers.

Graham explained groups like hers were skeptical about these types of zoning categories, associating multi-family housing with transient residents, neglectful landlords and other nuisances.

“The trash is the number one complaint. You see once these units are up, you see more trash,” she said. “The number two issue is parking, but we understand that’s all around the city.”

She also said that neighborhoods like Strawberry Mansion felt they had born a disproportionate brunt of past affordable housing initiatives aimed at creating affordable rental units.

One way to read Briggs’s article is that, by failing to put in place policies that would address people’s reasonable quality-of-life concerns, or properly fund the Department of Licenses and Inspections’ code enforcement and inspections staff, the Kenney administration is forcing neighbors to address these issues through much more economically and environmentally-costly zoning tools instead.

Half the complaints in the article are about things like trash and litter, and building maintenance issues that could be addressed through better code enforcement, but because the City does such a poor job at these things, people are desperate for any and every tool they can find.

In choosing this path, Kenney—generally considered to be a very pro-construction Mayor who’s broadly aligned with the building trades unions—is effectively undermining the 2012 Zoning Code Commission’s consensus about prioritizing fewer overlays and patchworks of conflicting rules in favor of a citywide rule-based code and process that’s mostly the same for everybody. And if he doesn’t turn things around, he could end up presiding over an incredible loss of power for the institution of the Mayor in the city housing and planning policy space due to an unnecessary anti-construction backlash.

Regular readers of this space know street sweeping and litter are both areas where the city’s falling down on the job, but there are a number of other ways the Mayor could fix some of the problems at the root of Overlay Mania.

First, the Department of Licenses and Inspections has been chronically underfunded for years, and the situation only got marginally better during Mayor Kenney’s first term. L+I is responsible for things like inspections and code enforcement, and a better-funded department could be more reliably addressing the kinds of quality-of-life issues people are raising, including disruptive and ill-tended construction sites.

The administration also needs to take seriously the trash issues associated with smaller apartment buildings. One questionable feature of city trash policy is to make apartment buildings with more than 6 units purchase a commercial trash plan from a private trash hauler, rather than simply charging an appropriate amount of tax to pick up everybody’s trash. That has the effect of putting at least some trash out on the curb multiple days a week, with garbage trucks coming through more often than what would happen if the city just collected that money and did twice-a-week pick-up for everybody.

The Mayor’s office should also explore building code changes requiring trash storage areas for smaller apartment buildings to address these objections. Or if they wanted to go more municipal in direction with it, they could try out some shared neighborhood receptacles like they have in some other countries.

Even under the most ideal conditions, some amount of NIMBYism is always baked in to the housing discourse. But the Mayor’s neglect of these kinds of avoidable quality-of-life issues is giving it more oxygen, and needlessly turning people who might be more neutral to positive about housing into opponents. In doing so, he’s going to grow the power Councilmanic Prerogative and make it increasingly impossible for the Mayor and the Planning Commission to have any influence over the high-level housing and planning goals that will determine the city’s future course.