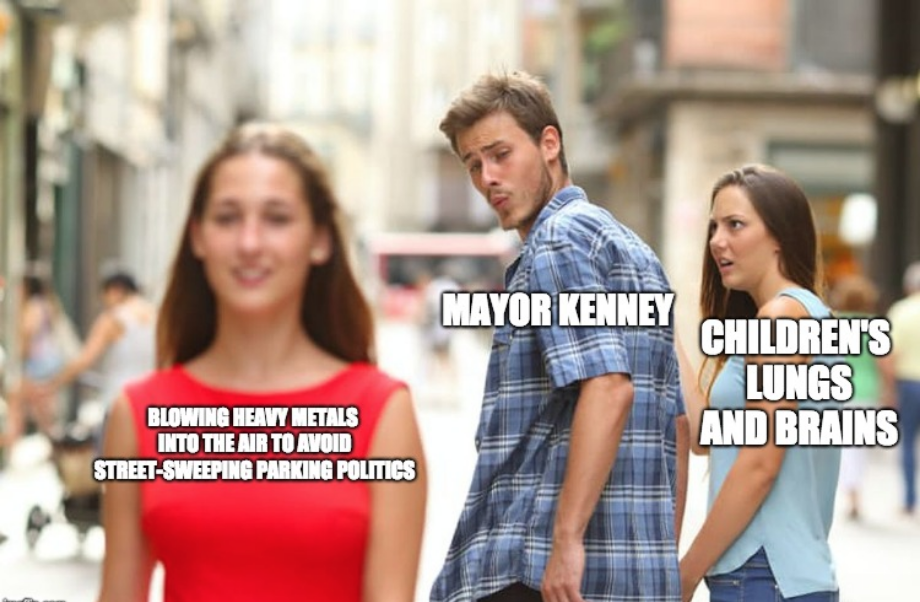 There are a lot of problems with this idea, the largest among them being the environmental hazards of kicking up a lot of dust that, as we know from recent reporting, is often full of toxic heavy metals.

Here's what the administration is planning to do, according to PlanPhilly interview:

In an interview, the city’s managing director, Brian Abernathy, said the upcoming pilot would focus on strategies that allowed cars to stay put while streets are swept.

“The pilot is actually going to be a mixture of mechanical sweepers, as well as laborers who will blow trash into the street, where the sweepers will then pick it up, so folks don’t have to move their cars,” he said.

Abernathy did not give specifics but said the program would target six neighborhoods “that need the most assistance with street sweeping”  The locations, he said, will be determined in part by the city’s so-called “litter index.”

“Not surprisingly, those areas are often some of the communities that have seen the fewest city services,” he added.

We still need a lot more details, but even just conceptually the plan is a hot mess right from the start. First, they're talking about having what will probably have to be at least a three-person crew, which makes the program unnecessarily costly to administer and harder to expand to cover all neighborhoods universally.

Managing Director Brian Abernathy wants to frame the administration's position in equity terms ("communities that have seen the fewest services"), but this is really just a diversion. The reality is that, going off of the Streets Department's own estimates of $3-5 million to sweep every neighborhood once or twice a month, a universal street sweeping program would be trivially cheap to administer.

And because it's so cheap to supply everybody with equal services, there's just no reason to accept that we're living in the kind of Hunger Games framework Abernathy is proposing. Now that they're trying to run this extra-high overhead version of the program though, just to avoid making people move their cars, it becomes a self-fulfilling prophecy that the program will become too expensive and inefficient to run city-wide.

A leaf blower also can't dislodge all the caked-on dirt and silt that have built up on many curbs after decades of neglect by the City. When I volunteered for my local spring clean-up last year, I shoveled about a half-block's worth of that silt near Shissler Rec in Fishtown. It filled about 10 trash bags, and they were probably about 80-90 pounds each. There's a ton of legacy crud out there that a leaf blower isn't going to be able to get. We need sweeper brushes to be able to get right up on the curb.

The other big leaf blower problem—and this is the worst part of the whole plan—is that two-stroke gas-powered motor leaf blowers are extremely dirty and terrible for air quality. According to one source, they contribute 81% more emissions than a car, and contribute to smog and fine particulates in the air.

Because of the particulate pollution, as well as serious noise pollution concerns, leaf blowers have been banned for street sweeping use in Anchorage, Alaska, and have also been banned for all-purpose use all over California.

Has the administration even consulted their Health Department or the Office of Sustainability about this idea? It's hard to imagine they could have, seeing some of the damning environmental reporting that's readily available out there. In a city with such high asthma rates to begin with, and what we know about the lead and other industrial heavy metals that exist in our street dust, this is a very steep price for everyone—and particularly children—to have to pay purely so the Mayor can avoid a tough conversation over street parking.

To demand a universal street sweeping service covering all of Philadelphia, add your name to our petition calling on the Mayor to keep his campaign promise and get this done in his first term