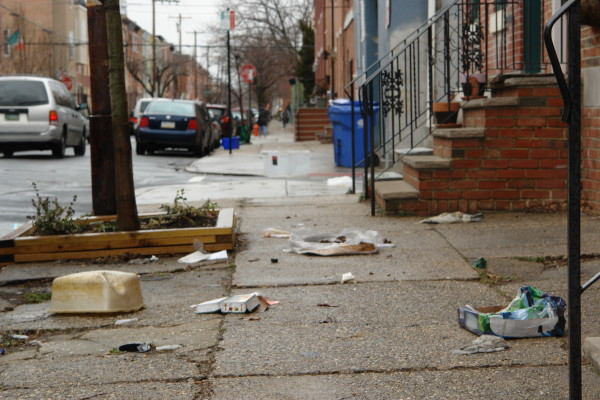 (Philadelphia Less Beautiful Than It Could Be Without Discoverable Block Captains | Photo: AxisPhilly)

You know these seats exist and that people were elected to them, but the only way to find out who won the seat in your area is to knock enough doors and get the information eventually by word of mouth.

Under the circumstances, it would be pretty damn hard for constituents to hold that person accountable for doing their job. And without being able to see the larger list of the dozens of elected representatives who are (supposedly) active in your area, it would be next to impossible to organize all those folks to work on larger community projects and goals.

This policy has long bedeviled civic association leaders who have tried to obtain the list in order to coordinate clean-ups and activities with their neighborhood's block captains, only to be rebuffed by Streets.

It's not entirely clear why Streets won't release the list, but the reasons out there sound awfully specious. One rumor is that Streets believes outing block captains in some areas would endanger them. It's not clear why this wouldn't be equally true for ward committeepeople or board of elections representatives though, and the city still releases those names for accountability's sake.

The official reason the City gave for rejecting my Right to Know request for the block captain list a few months ago was that block captains are actually making a donation to the City of Philadelphia, and therefore have protection from being named publicly under recent case law. To quote the Office of Open Records letter denying my appeal:

While “donation” is not defined in the RTKL, the Commonwealth Court has found that “the volunteering of property or services,” when made without compensation, constitute donations for purposes of Section 708(b)(13) of the RTKL. See Municipality of Mt. Lebanon v. Gillen, 151 A.3d 722, 729 (Pa. Commw. Ct. 2016).

This makes no sense. For one thing, you can't legally count your time as a charitable donation in any other circumstance, and also, block captains aren't donating their time to the City of Philadelphia--they're donating it to their local community.

The Mt. Lebanon case they're citing here is still under appeal, so we'll see how that shakes out in due time.

In the meantime though, the Kenney administration should recognize that this is a stupid, counterproductive policy and reverse it.

As quasi-elected officials, block captains should have some minimum baseline of accountability to their neighbors, and the ability to quickly and easily find out who's supposed to be doing this work in your neighborhood is the most basic precondition for this. There's no excuse for keeping it a secret.

This matters, because supposedly there are over 6,000 block captains in the city, and the Philadelphia More Beautiful Committee at the Streets Department dedicates a lot of staff time to managing these folks.

Does the program actually work to keep neighborhoods clean? Is anybody doing this work regularly? Nobody knows, but we keep throwing money at it because of the deep political appeal of the idea that community organizing can solve Philly's litter problems.

It seems to me that there's very little evidence to suggest that sporadic volunteer clean-ups can achieve a state of sustained cleanliness, judging by the persistently filthy state of most Philly neighborhoods. But even the best possible version of this program would need, at a minimum, a publicly-accessible list of participants so residents and neighborhood organizations at least know who is supposed to be organizing the sporadic clean-ups.

A few years ago, one Center City-area civic association that was desperate to get the list of participating block captains within their boundaries struck a deal with the Streets Department that allowed them to at least find out how many block captains were in their area.

They then gave Streets the corresponding number of blank stamped envelopes containing a letter inviting block captains to attend their next meeting. Streets then wrote in the addresses and mailed them out. A handful of the block captains who received the letter came to the meeting, but they never found out who most of them were, and they still haven't!

Clearly, this is insane. Mayor Kenney, do the right thing! Liberate the block captain list for a cleaner Philadelphia!