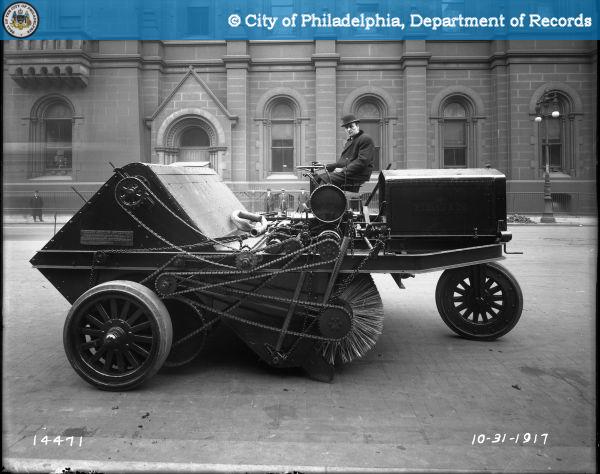 (We used to do it | Photo: Department of Records)

It’s happening. In his second Inaugural address, Mayor Jim Kenney committed in no uncertain terms to a citywide street sweeping program that would reach every neighborhood—a change we have relentlessly, tediously, made the case for in this space over the last several years.

Laura McCrystal reported the news from the inauguration ceremony, where the newly termed-out Mayor delivered some rare tough talk to the fans of free and unaccountable street parking.

“We will continue to ramp up illegal dumping enforcement and build on our successful street sweeping pilot program by expanding street cleaning to every neighborhood and commercial corridor by the year 2023,” Kenney said after he took the oath of office and began his second term.

Specifics were unclear Monday. But Kenney’s inaugural speech included a few hints: Unlike a pilot program last year in some neighborhoods, the mayor said residents will need to move their cars for the new program.

“Yes, you heard that right, every neighborhood,” Kenney said, “which will even require folks to move their cars.”

Later in the day, the Mayor gave another interview where he walked this back a little, saying that not every single neighborhood would necessarily see alternate-side parking under the new program, but the basic promise remains intact: the program will be universal rather than targeted only to the dirtiest locations (which was the administration’s previous position), and it will involve mechanical sweeping and alternate-side parking rules as the default approach, rather than the gas-powered leaf-blowers.

That’s a huge departure from where the administration has been the whole first term. While Mayor Kenney promised to do this in questionnaires as a candidate in 2015, that didn’t stop him from back-burnering the issue, even when there were clear opportunities to advance it, like in the Zero Waste action plan.

But while it’s true this is just another promise like the last one, it does seem significant that it was made at the Inauguration, generated a lot of press, and the Mayor continued to talk about it and defend the idea in interviews afterward. People will remember this much more explicit commitment and will have more specific details to hold the Mayor accountable for.

Opponents will certainly have their say too, especially after the service goes live, but Mayor Kenney would do well to listen to his friend, former 1st District Councilmember Frank DiCicco’s advice: “You just need the political will to hang in there.”