How to Make the New Plumbing Code a Housing Affordability Win 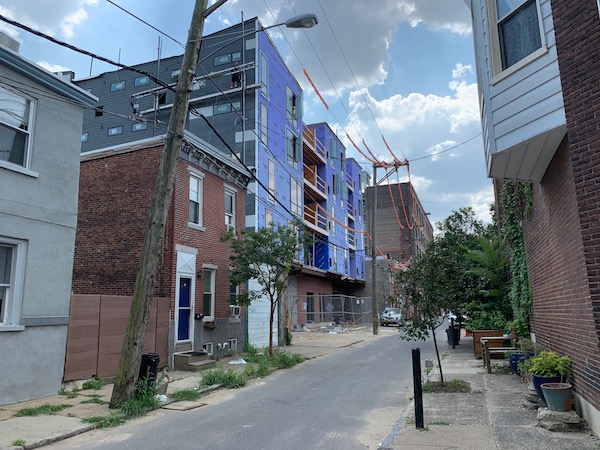 Philadelphia has some of the highest relative construction costs of any big U.S. city, and one of the bigger contributors to this problem has been our antiquated Plumbing Code.

Those high construction costs then show up in the cost of housing, leading city officials to adopt unpopular workarounds like the ten-year tax abatement that bridge the gap between what it costs to manufacture housing, and what buyers can afford to pay.

Over the past few years, the abatement has had a big political bullseye on its back though, creating a more urgent imperative for local lawmakers to seriously address the underlying reasons for high construction costs that are within their control, like outdated provisions in our building and zoning codes, or slow permitting processes, that increase the cost of housing downstream.

The plumbing code, and specifically its requirement for using metal piping, has one of the biggest sources of unnecessary costs, and there's been a negotiation going on since 2018 over how much PVC piping to allow. This week, there was some good news on that front, as PlanPhilly reported there was finally a resolution to the political tug-of-war between the plumbers union and other building industry stakeholders that could shave as much as 20% off the cost of building larger residential projects.

The most significant of the code reforms passed into law makes it easier to use plastic piping in mid-to-high rise residential buildings, easing construction costs that are among the highest in the nation, according to local experts. The updated code goes into effect Oct. 1.

The Building Industry Association (BIA), which negotiated on behalf of development interests, has said the move to plastic pipes could reduce project costs by as much as 20% [...]

The deal isn't perfect, of course. As Jake Blumgart points out, with nobody lobbying for commercial properties to be included, they're completely left out of this framework and have to continue using metal piping in all new commercial buildings. Liberty Property Trust infamously had to install an entire extra metal plumbing system in the first Comcast building in addition to its real plumbing system for no-flush toilets because of our outdated code—an embarrassing waste of resources for everybody that could repeat itself even under the newly-adopted code. It's also unclear whether the height cut-offs for use of PVC piping correspond to any kind of engineering realities, or if they're just arbitrary numbers arrived at through political negotiation.

Still, it's not worth dwelling on nitpicky details in this moment, because this really is a huge improvement even with the compromises. That's because a super-majority of the new housing units that have been built in Philadelphia since the end of the Great Recession are in buildings with 5 or more dwellings, so if that trend continues, the plumbing deal will impact a large fraction of the new housing to come.

How much of those construction savings would get passed onto the end users of housing?

Cynics will claim none of it will, but the real answer will depend on how much landlords and housing sellers have to compete with one another on price to attract tenants or homebuyers. Because without enough landlord competition to keep rents in check, the construction cost savings are just going to get captured by the landlords and sellers.

In the seemingly-endless Seller's Market we've been living in since the end of the Great Recession, there's been very little extra slack in Philadelphia's housing market despite the appearance of a lot of new construction. And in that kind of environment, landlords and home sellers are able to charge much higher rents than what they'd be able to get away with if we spent a few years under Buyer's Market conditions with abundant housing and higher vacancy rates in the most in-demand neighborhoods.

With the types of mid-rise and high-rise buildings that would benefit most from these changes constrained to a relatively small number of locations in the core of Center City and University City, and along the spines of the Market Frankford Line and North Broad Street (but not most of South Broad), there are real limits to how much of a benefit we'll see from the Plumbing Code changes.

But they're limits that are almost entirely self-imposed. City Council District members could at any point decide to get over their phobia of allowing a lot of new 74-foot and 149-foot buildings that could benefit from these cost savings, and generally try harder to induce the kind of Buyer's Market conditions in the rental and condo markets where more of the Plumbing Code windfall would be competed away for the benefit of renters and home buyers. We haven't seen much evidence to suggest anything like this is forthcoming from City Council, or that they're even thinking about it. But rather than being cynical about things, we should actually try and do what it takes to make it happen.

One cause for alarm in the article is the quote from Plumbers Union President John Kane, who says he wants to see this deal last for decades:

"Quiñones-Sánchez’s relations with Philadelphia building trades unions have historically been fraught, but the president of Plumbers Local 690, John Kane, took time out of his speech to praise the councilmember for her leadership.

“She stuck with us, stuck by our side, worked with us,” said Kane. “I’m telling you in the plumbing history, this is a historical moment, this plumbing code will last decades around here.”

This is disturbing since the International Plumbing Code that is the foundation of most state and local plumbing codes is updated every three years, most recently in 2018.  Our local code should also be updated every three years to match the International Plumbing Code and reflect the latest approved technological advances in building materials. There are all kinds of pro-sustainability changes that get approved in each update, and with the Kenney administration officially committed to big advances in building sustainability and energy efficiency, the last thing we should be doing is normalizing the idea of decades-long political deals on codes.