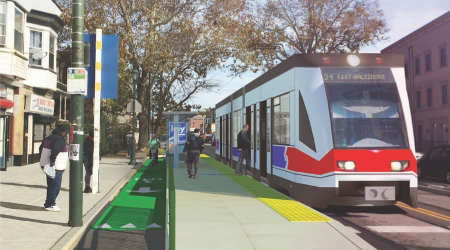 A very significant milestone for Philadelphia’s transportation future happened last week without much fanfare, when the Pennsylvania Turnpike Commission made its final legally-mandated annual payment of $450 million to Pennsylvania’s transit agencies.

That amount will shrink down to just $50 million next year, potentially leaving a $400 million hole in transit agencies’ combined budgets next year if state lawmakers don’t get their act together. And with SEPTA receiving about 70% of the state funding as the largest transit network in the Commonwealth, the southeast region would take the biggest hit.

Officially, Act 89 specifies that the Turnpike funding for transit is to be replaced with motor vehicle sales tax funding, which now is part of the General Fund. However, reappropriating that money will leave a $400 million hole in the General Fund, and almost everybody following this issue assumes that the Republican majority in the state legislature will simply raid the transit funding if nothing changes.

The most concerning part of this is that transit funding will go from a mandatory payment for a specific amount of money to just being a part of the regular state budget negotiations where there’s no floor how low the appropriation could go. What SEPTA and other agencies need is for the state legislature to create another dedicated funding source that can’t be raided and—unlike the Turnpike’s debt-backed payments—are also bondable by the transit agencies.

State elected officials who are transit supporters know all of this too, but in true Harrisburg fashion, they’ve waited to do anything about it until the last minute. Now, with the Turnpike making its final payment, we’ve officially gone over the funding cliff, but elected officials are still chugging along, Wile E. Coyote-like, toward an election-year budget season where this problem will become harder to solve politically.

For good or for ill, the fate of state transit funding is now effectively bound up with the fate of a larger transportation funding package that Governor Wolf, state legislative leadership, PennDOT, and various outside groups in the transportation space have been negotiating under the umbrella of the Transportation Revenue Options Commission (TROC), which Wolf created this spring. With Republican members upset about bridge tolls approved as part of a public-private partnership deal, Wolf bizarrely announced that he would try and end the state’s gas tax, and formed the Commission to come up with replacement funding. The TROC released its draft recommendations last week, which included replacing the state gas tax with a mileage-based user fee, tolling, and other fees and policy changes.

Most of the suggestions align pretty closely with the political framework of the Transit for All PA* platform from rider advocacy groups and transit workers, plus or minus a few items, and the TROC proposal calls for raising about $1.1 billion in transit funding—still short of the $1.6 billion that the PA Public Transportation Association has called for, but a major improvement over the status quo if it happens. It will be interesting to see if the agreement will have any extra political juice since Republican state legislative leadership was on the Commission and played a role in the negotiations.

Complicating things even more, any political urgency there may have been to fix the problem in 2021 before going over the funding cliff was depleted somewhat by the federal government’s COVID emergency funding measures.

PA transit agencies received three rounds of emergency federal funding related to the pandemic from the CARES Act, a subsequent aid package, and the American Rescue Plan. SEPTA at least is fairly well-capitalized through the next two fiscal years, but it’s unclear how much fiscal runway some of the smaller agencies have. Pennsylvania also has billions from the ARP uncommitted as of yet, and now that everything’s general funding, this could plausibly be used to support transit too.

Under the circumstances, PA state lawmakers have taken a wait-and-see approach to the federal funding situation before deciding to fix the state transportation funding issue, as exemplified by these comments from House Majority Leader Kerry Benninghoff in City & State PA.

“House Majority Leader Kerry Benninghoff, also a Republican, said in a statement that the proposed fees are coming at the wrong time, given that the federal government is currently working on an infrastructure package and the state is trying to plot an economic comeback following the effects of COVID-19 shutdowns.

“Before we go imposing multiple tax increases on Pennsylvanians who are already paying too much and receiving too little in return, raising the cost of commerce and energy, and prohibitively pricing Pennsylvania out of its status as the Keystone State, we should first see what comes out of ongoing federal discussions and how our continued economic recovery progresses,” Benninghoff said.”

As the final negotiations over the federal infrastructure bill continue to take shape, more information has been coming to light about the bill’s contents, including more state-level information about the funding levels for different kinds of infrastructure. A fact sheet issued by the White House on Thursday provided some estimates for what Pennsylvania is likely to receive for different items: 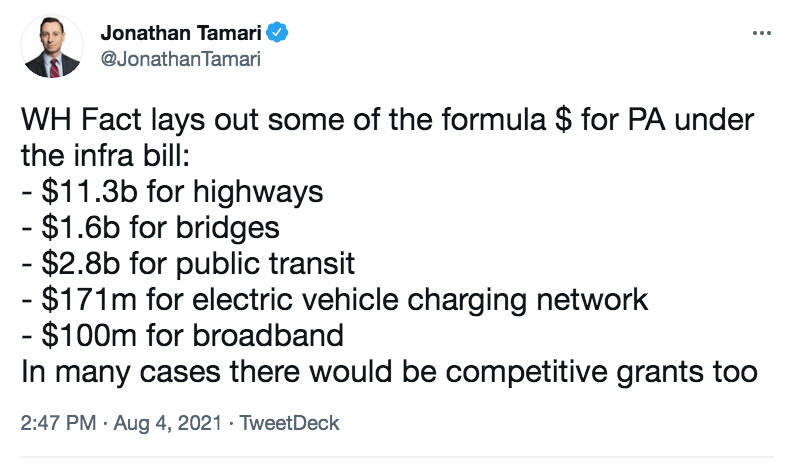 These are 5-year totals and only refer to the formula-driven parts of the bill, according to the Inquirer’s Tom Fitzgerald on Twitter. There are also competitive grant programs that could result in more funding for PA. Just based on the formula numbers though, if SEPTA were to receive roughly the same percentage of state funds as they usually do, they’d get about $1.9 billion of this funding, or $390 million per year.

In the best-case scenario, where the state transit funding is replaced in full, that would take bring SEPTA’s capital budget from $700 million a year to $1.1 billion for the next 5 years. That also assumes the funding is “net new”, which isn’t guaranteed, as one of the infrastructure bill pay-fors that’s been under discussion in the Senate involves tapping unspent COVID emergency dollars.

Unfortunately, federal support for transit operations is still missing from both the House and Senate versions of the infrastructure bill at this point, and that’s where SEPTA could really use more funding to hire more transit operators and increase its service frequency to be more useful to people. The capital projects are important too, but ultimately what’s going to win more people back to transit is providing more frequent and reliable service that gets people where they need to go—not just for a 9-5 commute, but on evenings and weekends too—and for that, agencies need more operating funds.

A bill from Rep. Hank Johnson, H.R. 3744, is the last best hope of pushing the operations funding into the reconciliation process where the House and Senate bills will be reconciled together. That bill would pave the way toward national transportation advocates’ demand for $20 billion in operating funds in the final package. So far, of the Philadelphia-area representatives, only Rep. Dwight Evans has co-sponsored the Johnson amendment, but there’s still time to act.

The federal infrastructure bill could be a significant win for Pennsylvania’s transit agencies, but it shouldn’t be considered a substitute for state action to secure sufficient dedicated state funding too. The increased federal funds will mean more project opportunities out there that will need state and local matching funds, and if Pennsylvania wants to be able to compete for a decent share, we’ll need to fix how the Commonwealth funds transit this year. There’s no more time to waste.

*Jon Geeting serves on the steering committee of Transit Forward Philly, one of the leading organizations in the Transit for All PA coalition