Philadelphia Grew for the 12th Straight Year Since 2006

New Census figures released Thursday revealed that Philadelphia county's population grew for the twelfth straight year since 2006, increasing by 3,917 residents between 2017 and 2018. Philadelphia's growth outpaced most of the southeastern suburban counties, powered mostly by immigration and births.

While the novelty may already have worn off for some, this 12-year growth period is still important to keep in context, as the 30-year period of population decline and economic stagnation starting in the 1970’s isn't that far in the rearview. That period was formative to the political worldview of many of Philadelphia’s incumbent elected officials, and even today, after a dozen years of growth, you can still hear some of them confidently predicting a time when the newcomers will decamp for the suburbs.

And it’s certainly true that some people will leave, but on the whole, the trend has been pointing in the opposite direction. In the Philadelphia-Camden-Wilmington MSA region, the population grew by about 18,000 people, or 2.8%, while Philadelphia's population grew at 3.7%, outpaced only by Chester (4.4%), and overtaken in raw numbers only by Montgomery County by just 125 people. 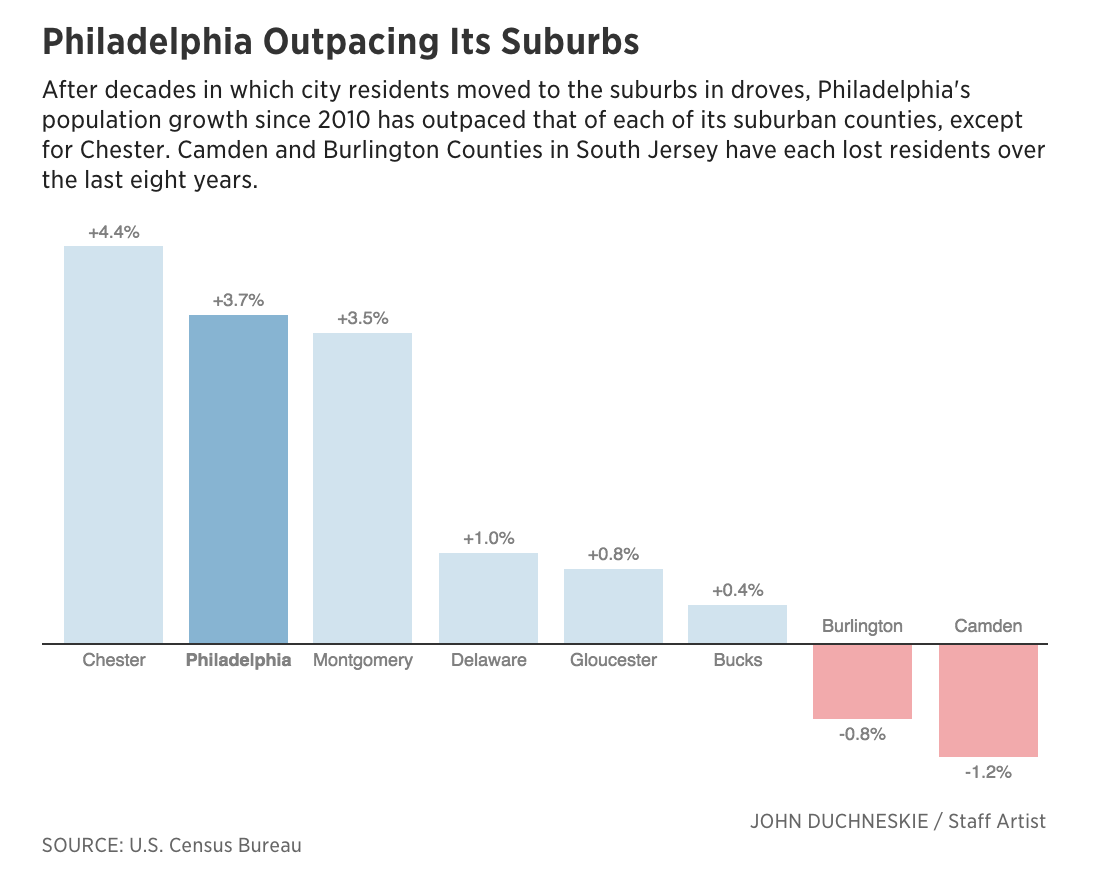 "Benjamin Gruswitz, senior planner at the Delaware Valley Regional Planning Commission, attributed the upward trend to several factors. In addition to an increase in the immigrant population and births outpacing deaths, he cited “an influx of people who want to live in higher-density places with walkable neighborhoods, short commutes to work, and access to transit and other amenities.”

Philadelphia has this kind of housing in much greater supply than the suburban counties do, but not in such great quantities that we’ve been able to avoid a much more limited version of the problem most large U.S. cities are facing, with clusters of housing shortage and price inflation in the highest-opportunity locations and adjacent neighborhoods.

Philadelphia has done better than some other big cities in terms of permitting about as much housing as there is population growth. As the population grew by 3917 people last year, the city permitted 3,239 units of housing, according to HUD. About 683 of those units were single-family homes, and 2,556 were in multi-family buildings. About 72% were in buildings with 5 or more units, so the kind of dense housing DVRPC's Gruswitz refers to was indeed the real workhorse behind our housing growth.

But it’s important to keep in mind the overall national context, where we see that Philly has also been permitting the fewest housing units per capita of any major city in the United States.

One takeaway from this is that while many of our longer-serving elected officials describe our housing growth as a boom or in even more grandiose terms, we've really seen a much more modest pace of change compared to the U.S. cities that are building even the median amount of housing per capita on the list. Even though we’ve been playing this game on the lowest-difficulty setting, some of our elected officials, lacking any national or international perspective, are already itching to hit the pause button.

Another point to consider is that population growth is not an independent variable. We can have more or fewer people based on how much housing is permitted. In the conventional way of thinking about this, we only built 3,000 units of housing because we only had 3,000 new people to accommodate. A different way to conceptualize this is that we only had 3,000 people move here because we only permitted 3,000 units of housing. Allowing more housing, then, would increase our population.

There are lots of different things we could do to stoke more housing growth in high-opportunity neighborhoods where land keeps getting more expensive, like legalizing more of the 5+ unit buildings that have been fulfilling most of our housing supply needs, but are nevertheless still banned on over three-quarters of buildable land across the city. That could help drive more population growth, jobs, and tax revenue for the City, along with more below-market units and Housing Trust Fund revenue as well to house the huge numbers of people who can't afford even the cheapest market rate housing.

Philadelphia has the largest labor force and the most employed people that we’ve had since 1990, with a low unemployment rate of 4.9%, but we can keep doing even better. Growth and jobs aren’t everything, but they’re a necessary prerequisite to pay for a lot of the ambitious and expensive goals many candidates are running on this election season.

The way you’ll be able to tell the difference between the candidates who can deliver on their big promises, and the ones who can’t, is that the credible ones will also have real plans for boosting our middling growth rate, and attracting more people and jobs and money to the city.