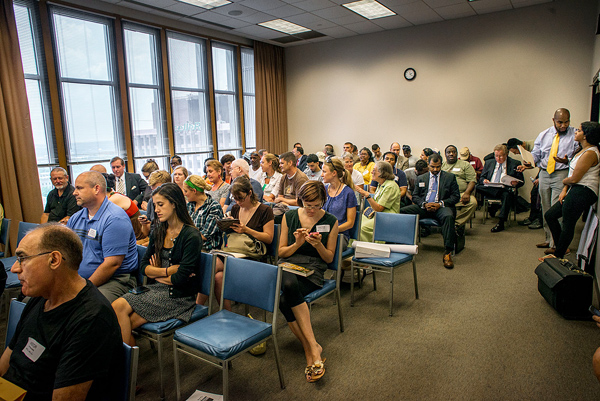 (No room for social distancing in the ZBA chambers)

Philadelphia city government embeds public engagement requirements into a lot of its official processes, and one of the big question marks of the COVID-19 era is to what extent the City will allow itself to continue to do the public’s business given the inability to hold in-person public meetings, and what best practices will emerge for virtual civic engagement.

A month and a half into the lockdown, the picture looks spotty. City Council, the City Commissioners, and some other city agencies have moved their meetings to Zoom video calls and have made provisions for the public to submit comments by Zoom, phone, or written format. The Philadelphia Parking Authority and SEPTA have been taking public comments via phone for their board meetings, and there’s been some controversy about the inclusivity of those approaches, particularly with SEPTA holding hearings about a substantial fare restructuring proposal they plan to pass in May.

One major area that’s been unclear, but is starting to come into view, is the construction permitting process. Construction may be shut down for now, but it’s expected to be one of the earliest sectors allowed back to work, and it can take months for new applications to work their way through the city’s permitting process. For there to be shovel-ready projects and construction jobs waiting on the other side of this, permitting can’t totally shut down for the duration of the whole stay-at-home order.

In a lucky break, the new eClipse online permitting system debuted right before the stay-at-home order went into effect, so it’s now possible to do all aspects of permitting online for construction applications that are fully compliant with the zoning code—almost three-quarters of applications, according to a 2018 Planning Commission review.

But for the roughly one-quarter of applications that deviate from the code, those require both an advisory neighborhood meeting hosted by the local Registered Community Organization (RCO) and a Zoning Board of Adjustment (ZBA) hearing, and that process has been halted since mid-March.

On a call Thursday hosted by the law firm Klehr Harrison Harvey Branzburg, officials from the Department of Licenses and Inspections and the ZBA provided updates to interested parties about reopening plans for the construction permitting bureaucracy.

In early to mid-May, virtual meetings will begin for the Planning Commission, the Historical Commission, the Art Commission, the Board of Building Standards, and the Plumbing Board. However, officials are still unsure about when the Zoning Board of Adjustment and Civic Design Review meetings will resume. ZBA hearings have been canceled through May 16th, and paper appeals filed with the ZBA before the shutdown are being held and are not being assigned new meeting dates at this time. The big hold-up is that these processes are contingent on when Registered Community Organizations will resume hosting zoning meetings, and it is unclear what will happen there.

For the moment, the City is in the absurd position of having individual RCOs—unelected, non-governmental, advisory-only citizen groups registered with the city— controlling the whole timeline, with ZBA attorney Sharon Suleta saying “each RCO gets to decide what works for it individually.”

The Planning Commission initially provided guidance to RCOs a couple weeks after the stay-at-home order went into effect saying that the city would not discourage RCOs from hosting online meetings to review zoning variance cases if their bylaws allow it. And then this week, Planning Commission Executive Director Eleanor Sharpe sent another email to RCOs saying that the City wants to see the groups create a process to have online meetings, and that Planning would be sending out a survey in the coming weeks to gauge different groups’ technological capacity to handle this, and provide assistance where necessary:

“Public health officials believe that social distancing will continue for quite some time. Accordingly, we believe that it is important that we find a way to restart RCO meetings – safely. One option is to hold virtual meetings where all the participants are in different locations. Some community organizations are already holding virtual meetings. Others likely have the capacity to start virtual meetings soon.

However, it is important that the process not be limited to RCOs with the technical or financial capacity to hold virtual meetings. The City is committed to find ways to work with RCOs where there is a development in the pipeline to host meetings that offer adequate opportunities for participation for members of the community. That public participation will include in some way the opportunity to review developer material and comment, just as if the meeting were being held in person.

It is important that we return to creating new homes and job opportunities for Philadelphians once we can safely do so. RCOs are an important part of that process. When that process restarts, we need to find a way to gather public input on proposed developments and to do so safely.

Because the most active areas for new home construction tend to overlap pretty closely with the RCOs covering places lots of professionals live, most of the RCOs that are seeing the most zoning action can reasonably be expected to figure out how to manage a Zoom video conference. Janice Woodcock of Center City Residents Association, one of the top 2 or 3 most professionalized RCOs in the game, was on Thursday’s call and described a pretty straightforward version of the same process CCRA usually runs, but with some sensible adaptations for the online meeting format. 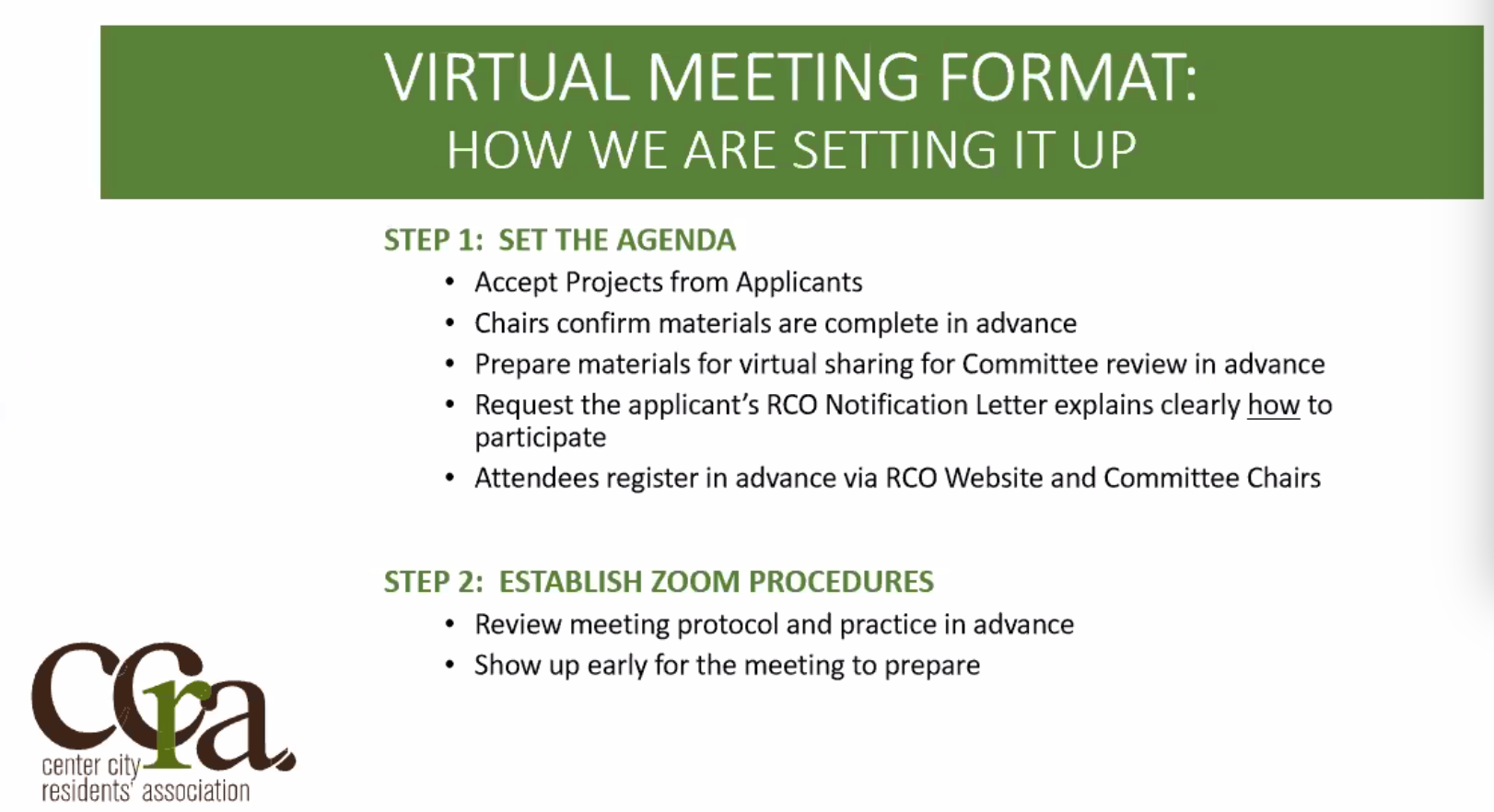 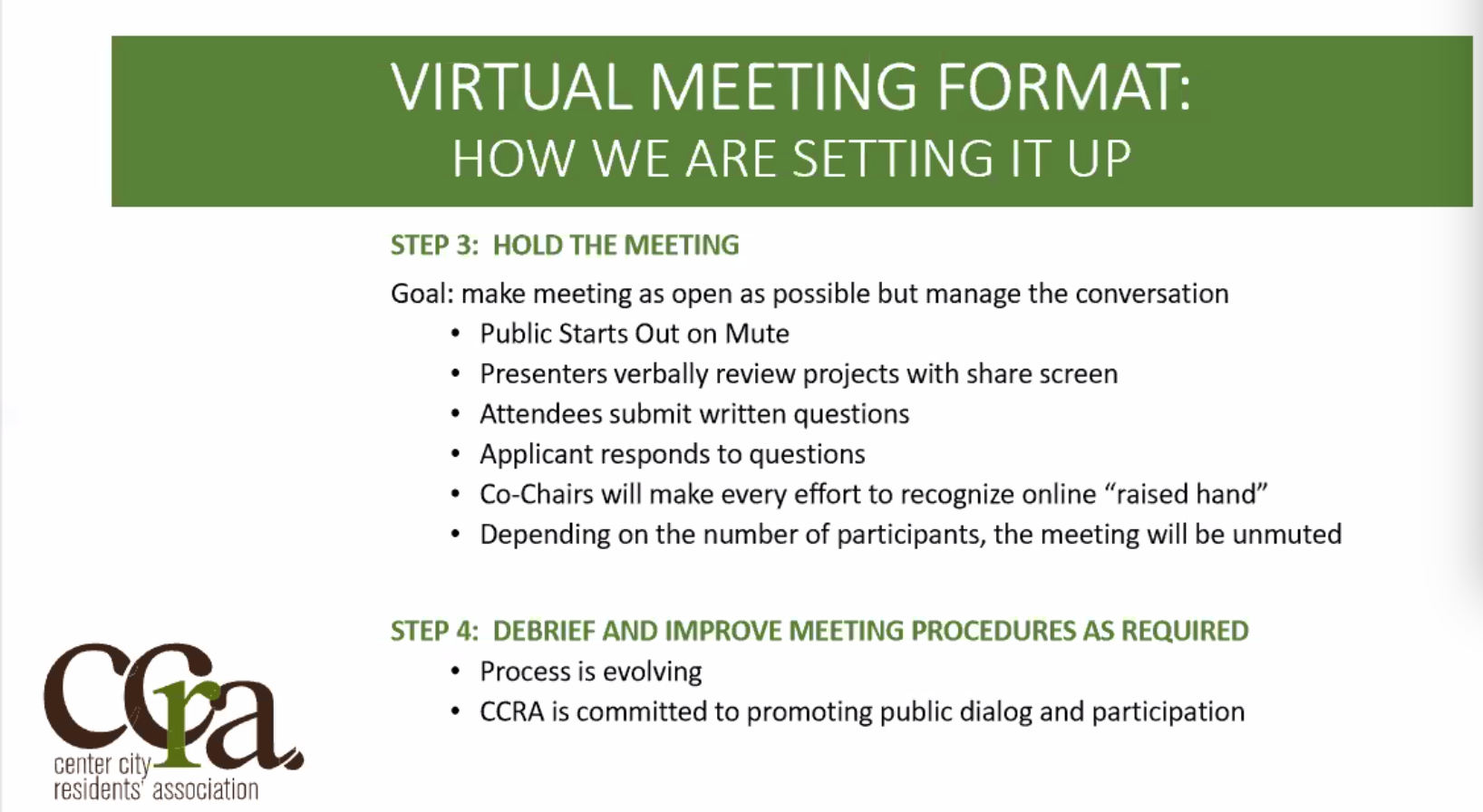 One thing that will be interesting to watch as more groups try this approach is whether the online hearings generate more attendance than the typical in-person zoning meeting. When we talk about the potential for imbalanced participation with online meetings, the question has to be “compared to what?”

The most important thing to note about zoning meetings as practiced now is that, in any given neighborhood, almost nobody chooses to participate in them, and the group that does isn’t necessarily representative of mainstream opinion. The traditional public meeting format has come in for a lot of criticism for its own representation problems recently, with new research about housing meetings in the greater Boston area finding that these forums tend to amplify the opinions of disproportionately older, whiter homeowner voices that are significantly more housing-skeptical than the median resident.

It’s reasonable to expect the most hard-core zoning fans are going to find a way to be involved no matter what, but an online format would potentially bring in additional residents who are less able to attend public meetings scheduled during dinner time, such as parents or hospitality workers. Rather than creating a new participation imbalance, online meetings simply shift the ease of participation around to different groups, and may even grow overall participation.

Even if some RCOs do start hosting online zoning meetings, there are some foreseeable problems up ahead.

The first problem is that there’s no way for the city to actually make RCOs host meetings. To advance to a ZBA hearing, applications first need an RCO hearing, so RCOs can effectively block an appeal by refusing to schedule an online meeting. One solution to this would be to set a time limit, and allow variance applications to be deemed approved if the ZBA doesn’t rule on them within a fixed time period. This is already the case for by-right projects that go to Civic Design Review after 150 days pass.

Another possibility is diverting more cases away from RCOs, straight to the ZBA. If nothing changes, RCOs are really going to have to host online meetings about inane stuff like roof decks or lot coverage that shouldn’t have to go to a public meeting even in normal times, and that people especially aren’t going to be interested in right now. L+I Commissioner Dave Perri said on the call that “at L+I we are in early discussions concerning how to more efficiently handle minor ZBA issues so that we don't clog the pipeline and unnecessarily delay projects,” and ZBA Chair Frank DiCicco also expressed interest in fast-tracking minor cases. Sources said Councilmember Maria Quinones-Sanchez expressed openness to this idea on a Building Industry Association call this week.

City Council could also cut down the RCO zoning meeting calendar considerably by changing the code to reserve public meeting requirements only for projects above a certain size threshold like they do with Civic Design Review, or by legalizing more of the things that regularly trigger zoning refusals. Eliminating minimum parking requirements or allowing two or three-unit buildings in RSA zones—both good ideas in their own right—could shrink the overall ZBA caseload by as much as one-third, based on figures from the Planning Commission’s 2018 review of the code. 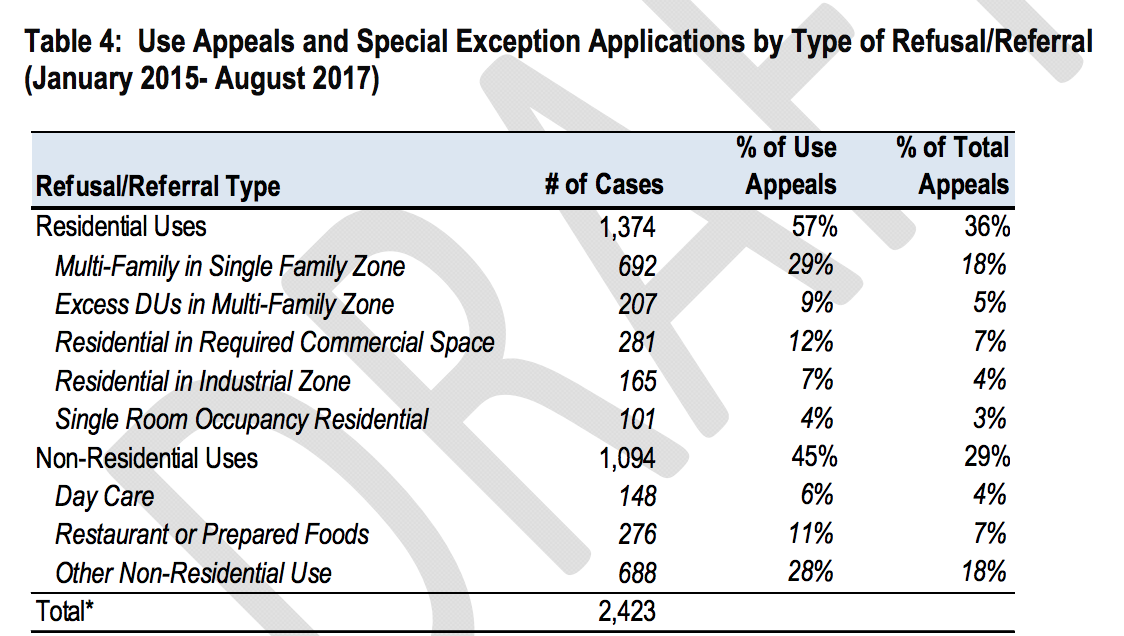 The second and bigger problem is that the ZBA itself isn’t planning to host online meetings, and won't restart their hearings until the city reopens, according to ZBA Chair Frank DiCicco. It’s unclear whether the ZBA believes this is a legal issue or if they’re simply making a policy choice. DiCicco mentioned the need for people to enter a record of their appearance for purposes of appeal, but it at least seems plausible this could be adapted for the virtual meeting space as Zoom does keep records of meeting attendees.

DiCicco also brought up the problem of physical meeting space, which is another point in favor of moving to virtual hearings. The usual ZBA hearing room is very small and wouldn’t allow for very many people if proper social distancing practices were followed. He said they’re looking at using courtrooms, or possibly renting space at the Convention Center, and hosting more total hearing dates throughout the week to spread things out more. Even so, the likelihood that Philly could be stuck in Governor Wolf's Phase Red or Yellow for the rest of the year means meetings of 25 people or more are out, and we need a process that still works under those conditions.

A bill in Harrisburg passed this week, SB 841, does make provisions for local agencies to host virtual meetings, but it does not require them to do so, and according to a blog post by the zoning and land use team at Ballard Spahr, it’s unclear whether the law covers Philadelphia’s ZBA or RCOs. “The current RCO meeting requirement is holding up many midsize to large projects in Philadelphia, even those that are as-of-right under the Philadelphia Zoning Code,” they write.

As Philadelphia attempts to work its way out of the economic misery of COVID-19, it seems clear the underlying strong fundamentals in housing from just before the pandemic hit are some of the main drivers that will lead the economy out of recession. Under the circumstances, getting the zoning variance process entirely into the virtual space is one of the cheapest and highest-impact things we can do to unlock more jobs and investment, and get more residents back to work as quickly as public health considerations will allow.