The Office of Performance Management partnered with Temple University's Institute for Survey Research (ISR) to survey residents about the quality of a broad range of city services like garbage collection and street maintainance, and the quality of spaces like parks and rec centers.

Read the report for the full survey results, and to learn more about ISR's methodology and how they weighted the responses to reflect city demographics.

The big topline finding is that while residents are fairly satisfied with the quality of most city services, justifiably or not, a large majority of respondents think the streets are dirty and poorly maintained, and they care more about this problem than parking. 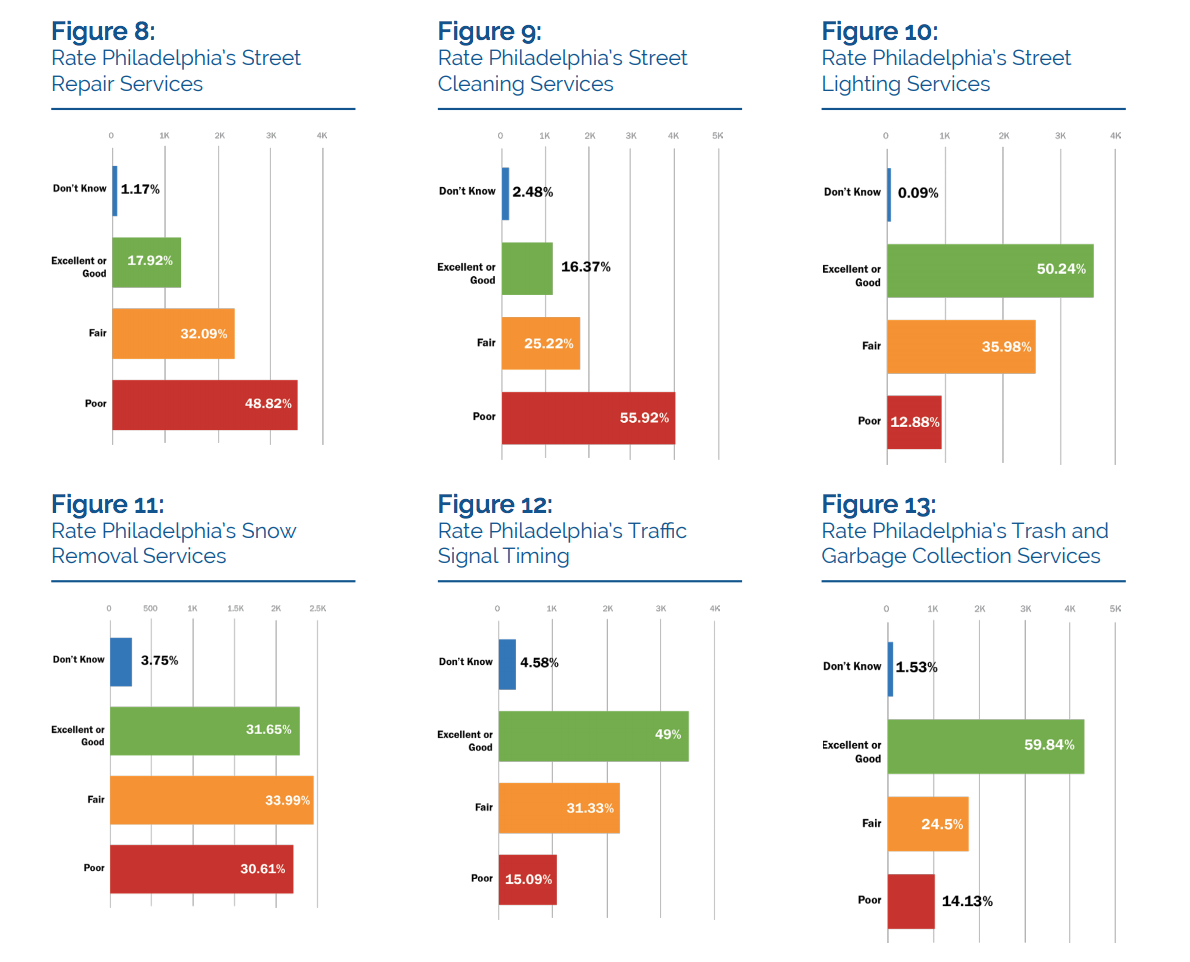 Street cleaning services, which do not exist in Philadelphia but for a patchwork of privatized services in a select number of commercial districts, provoked the most negative reaction in the whole survey.

Respondents' second-lowest rated city service was street maintainance, which makes sense given our miserly Streets Department budget. Philadelphia spends less on street maintenance per capita than Baltimore and Pittsburgh, and only repaves the streets every 10-15 years. Not coincidentally, many of our streets look like the surface of the moon.

Other city services were generally considered fair or good, except for snow removal, which no big city really does very well. 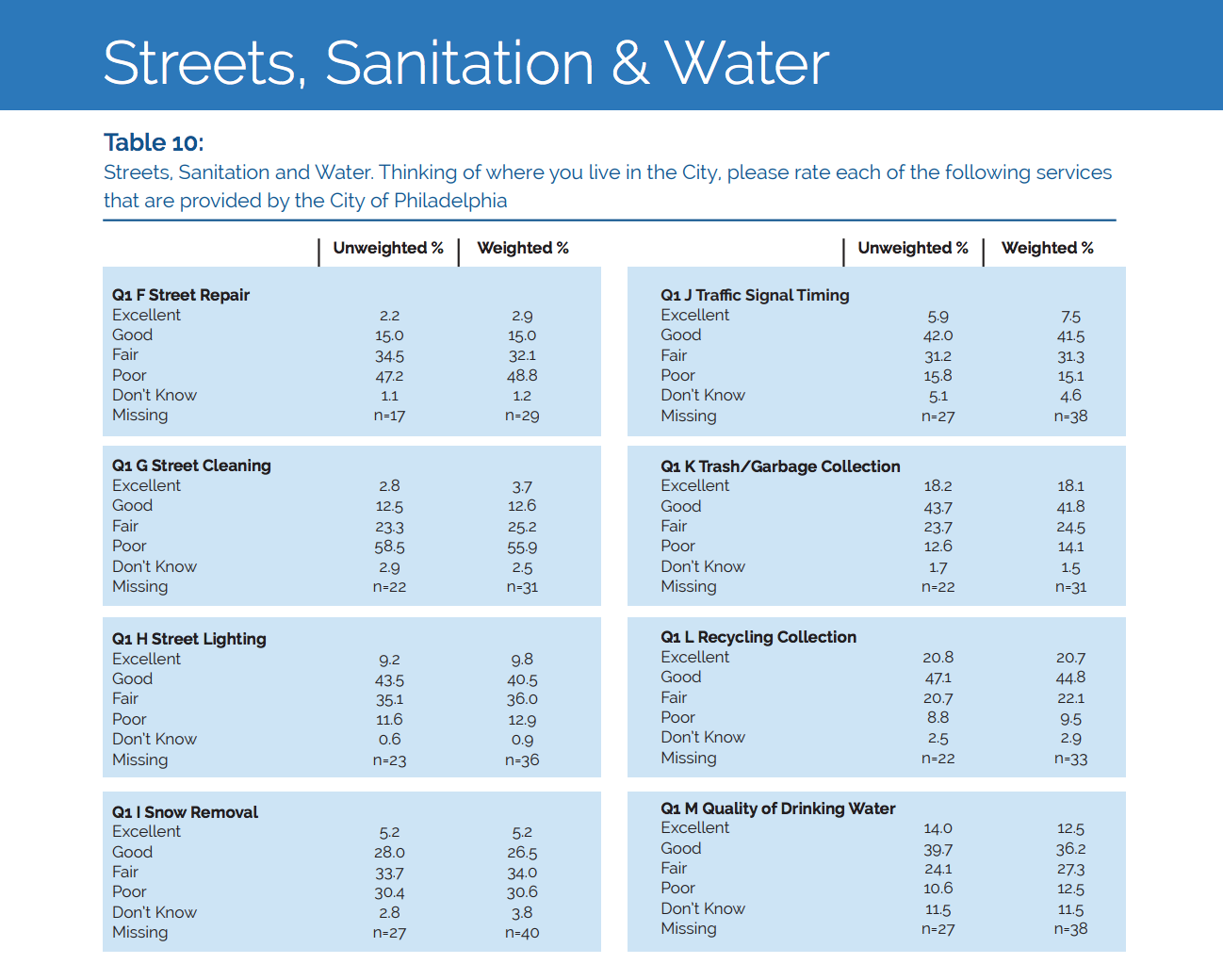 Respondents also overwhelmingly chose street projects as the topic they wanted more information about from the city, so there's a lot of interest in streets.

Mayor Kenney campaigned on bringing back street sweeping services in the 2015 primary, but has since punted on that issue, officially putting it on the backburner in the administration's Zero Waste Action Plan. This survey confirms that the public agrees with our position that the Mayor should strengthen this commitment and take measurable steps toward restoring the service by the end of his first term.

The issue with streetsweeping isn't the money—City Paper (RIP) interviewed city officials who estimated it would only cost $3 million in operating costs to sweep the whole city once a month, and $18 million from the capital budget to purchase the equipment. The problem is that Kenney's too squeamish about making residents move their cars once or twice a month to clean the streets.

Where do residents land on the cleanliness vs. parking trade-off? This survey actually provides some context on this, indirectly, by asking residents for the top three services they want to see the City focus on improving. People got to list three choices. And parking wasn't even close to a top concern.

Streets, Sanitation & Water was the top choice for about 38% of respondents, followed by Public Safety (22%), and School/Education( 9.25%) while parking was way down at 1.33%—the fourth-last choice. 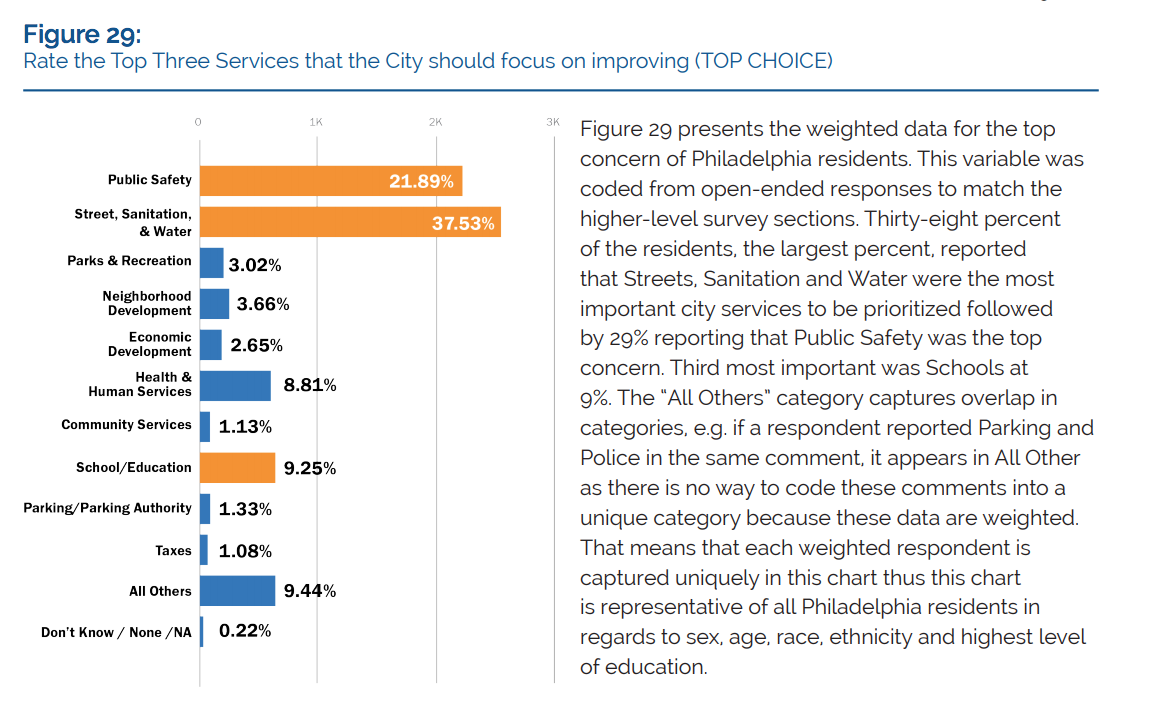 Streets, Sanitation, & Water was also the second choice for most respondents at about 35%, followed by Public Safety (22%) and Health & Human Services (11%). Parking is third-last as a priority, at 1.6%. 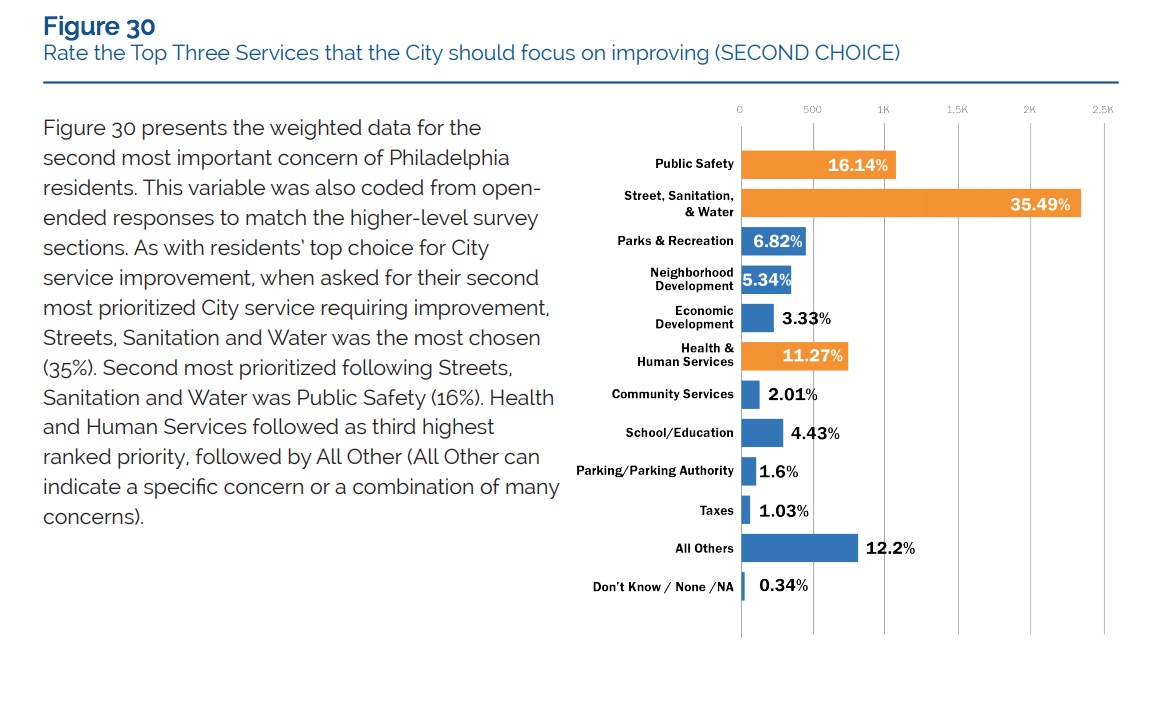 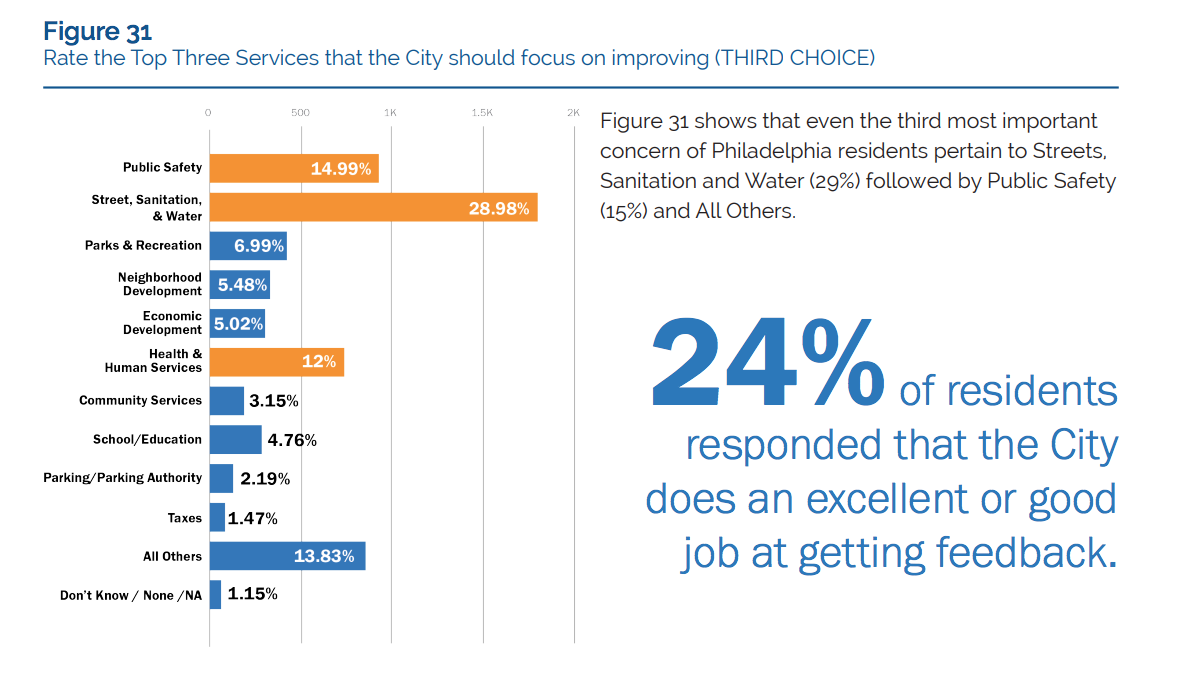 The question isn't whether people have some real anxieties about parking—if you've been to a neighborhood meeting, you know they do!—but whether most people care about it more than having clean and well-maintained streets. The idea that parking on the public streets should come with no public responsibilities whatsoever is extreme, and if this survey shows nothing else, it's that most people probably have a more moderate and flexible position on the trade-offs.

The parking extremists may be loud, but they're not representative. There's a silent majority out there that cares about the Filthadelphia problem, and is ready for Mayor Kenney to take action to fix it.