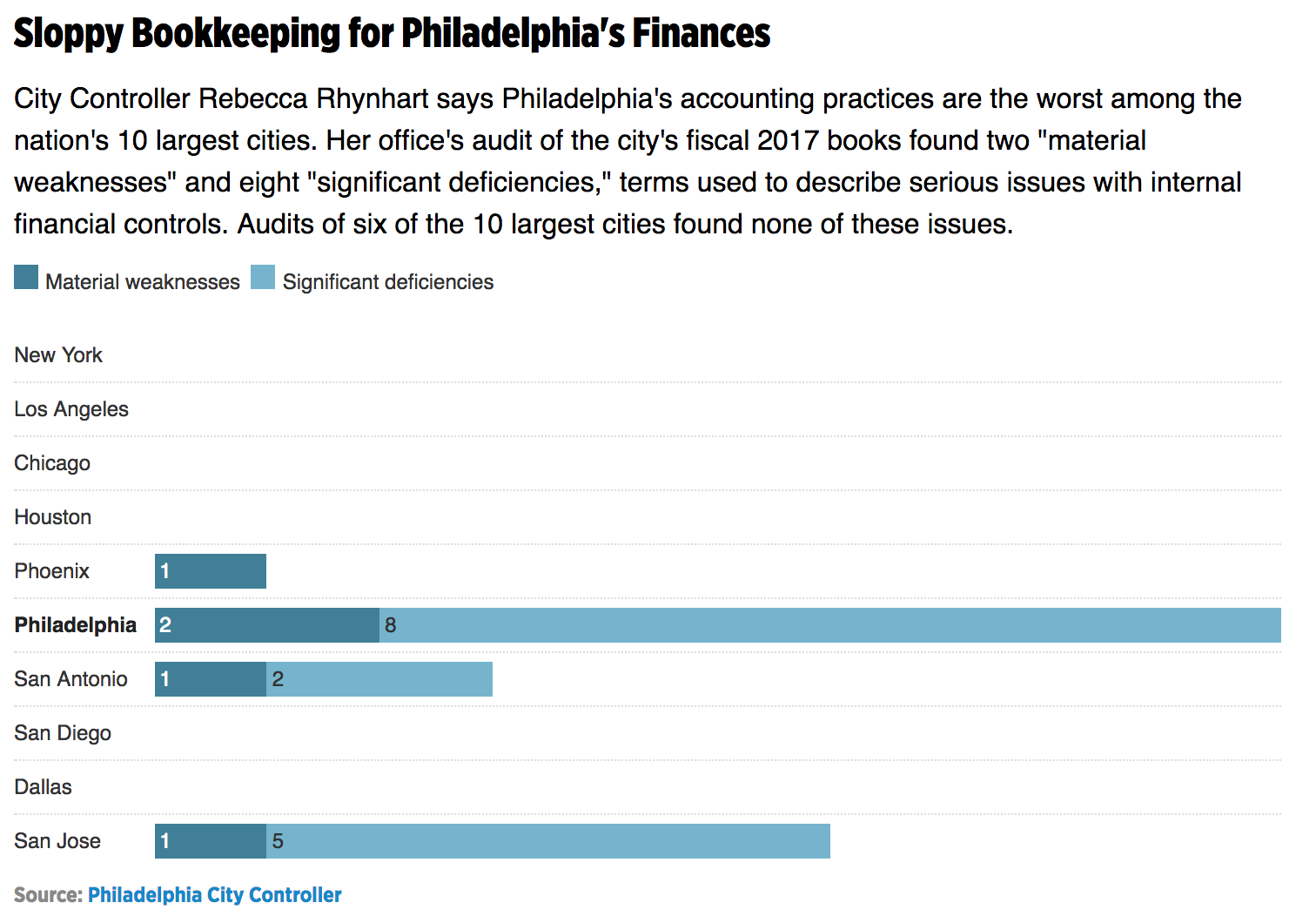 New Controller Rebecca Rhynhart held a news conference this week blasting the Kenney administration and Finance Director Rob Dubow, after a new Controller audit uncovered nearly $924 million in book-keeping errors last year. Rhynhart claims that Philadelphia has the weakest internal financial controls of any of our peer cities, including some processes are ripe for abuse by Revenue Department staff.

Claudia Vargas has the details:

"In total, the controller’s auditors found two “material weaknesses” and eight “significant deficiencies” in the fiscal 2017 books. The accounting terms refer to serious issues with the city’s internal financial controls.

“This is a major problem and needs to be treated that way by the mayor and the finance director on down,” Rhynhart told the Inquirer and Daily News. “If the City of Philadelphia is talking about tax increases, let’s get our house in order.”

By comparison, New York, Los Angeles, Chicago, and Houston did not have any problems in their 2017 audits. Phoenix had one deficiency and San Jose, Calif., had one material weakness and five significant deficiencies."

This news comes on top of the missing $33 million, which Rhynhart says stems from the administration's failure to reconcile their cash account for several years. The Kenney administration says the initial missing amount was around $40 million, but they've been able to reconcile $12 million of that total. Rhynhart's office has opened an investigation into the issue.

The Controller's audit also pointed out that Finance is understaffed with accountants and still lacks a comprehensive reporting system.

"Accountants in the Finance Office lacked a comprehensive financial reporting system to prepare the CAFR. Instead, accountants produce the CAFR using numerous Excel, Lotus 1-2-3 (a program that has been discontinued and unsupported since 2014), and Word files with various links between the files. Using multiple linked files creates a cumbersome process which can adversely affect the accuracy and completeness of the CAFR."

The Kenney administration is now saying the right things about taking this issue seriously, and Vargas reports that on Monday, Mayor Kenney invited Rhynhart to join a new Reconciliation Task Force to address the consolidated cash account reconciliation issue.

Notably, the reconciliation issue has been a finding in every internal control audit going back four years, so this isn't the first time Dubow is hearing about this. But it's likely being treated as a more urgent matter now, coming on the heels of the story about the unreconciled $33 million, and with a popular new Controller pushing the administration to publicly spell out a plan.

The administration is now saying the consolidated cash account will be reconciled by November, which is a notable change from prior years when Dubow would say things like "we'll learn from this experience" and then leave the Controller's findings un-remedied. The longest un-remedied finding in this audit is from 16 years ago, in 2002.

One takeaway from this episode is the value of having a truly independent watchdog in the Controller's office with an independent base of support counterposed to the Mayor. When Rhynhart was running in the primary, some people wondered whether she could reliably hold her former employers accountable. But here she is in just the first few months going right after her old boss. Coming in with a huge margin of victory in the primary with no support from the traditional party structure has given Rhynhart a nice buffer to act independently and avoid pulling punches. For example, the administration has tried to pass the blame for the unreconciled $33 million onto more junior staff, when really, the buck stops with Finance Director Rob Dubow. Rather than playing along with this, Rhynhart's audit and communications about the findings target senior staff.

Another takeaway is that the boring details of accounting are an especially important component of progressive governance that can't be waved away. The headlines about this controversy make Philly look bad, and in a way that plays into unhelpful narratives about the City's money management at a time when the Mayor and Council are telling residents they need even more money for city services. People would rather have more money than less money, so the prospect of a tax increase naturally invites questions about oversight of our existing funds, how well we're collecting the existing taxes owed, and so on.

If the administration can't show that they're running a tight ship with their current funding, that undermines the trust they need to expand the social programs progressives care about. People taking issue with the messenger really should redirect their ire to Dubow, who has apparently been ignoring these warnings for several years and not fixing the problems.