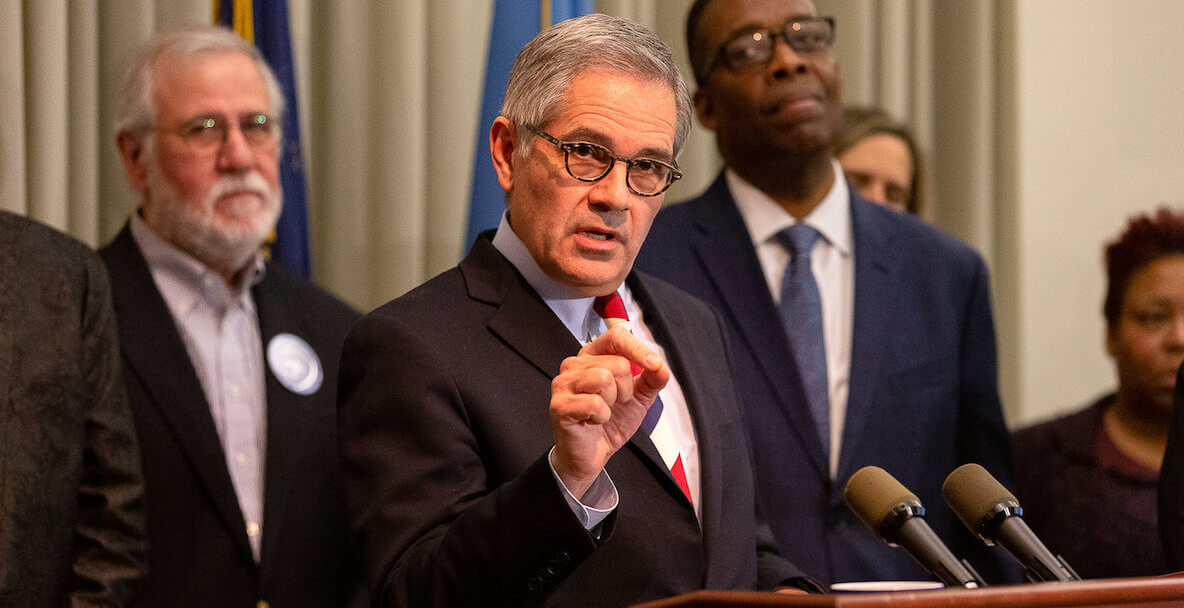 District Attorney Larry Krasner won a decisive victory over challenger Carlos Vega in Tuesday’s Democratic primary, winning 66% of the vote to Vega’s 34%, as of this writing.

The result isn’t entirely surprising given how often incumbents generally win reelection, but the background conditions of heightened gun violence and murders over the last year had many political observers wondering whether we’d see a thermostatic reaction to Krasner’s politics. In the end, most voters didn’t buy Vega and the FOP’s efforts to lay the blame for increased crime on Krasner, and the incumbent actually did better in the wards that had seen the highest numbers of shootings last year.

Chris Brennan and Jonathan Lai write that Krasner’s win was based on strong support in Black wards, as well as the “wealthy progressive” wards, to use Jonathan Tannen’s classification from Sixty-Six Wards. 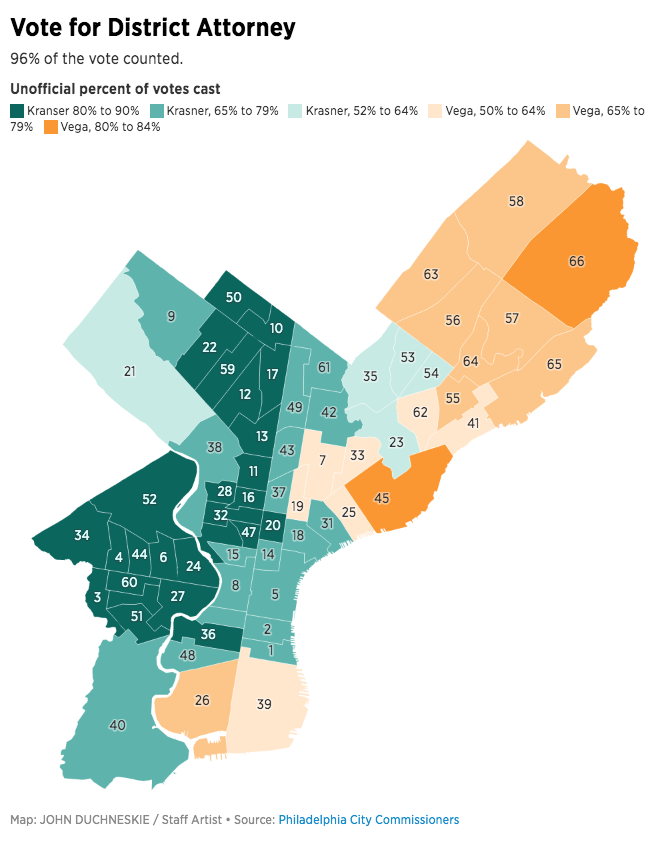 One thing that’s changed since the last D.A. cycle in 2017 is that the “wealthy progressive” wards now have a substantially larger footprint than just the first ring of neighborhoods around Center City and University City, and their voting patterns now extend far into South Philly east of Broad, and into the Riverwards neighborhoods. Part of this is about demographic change and polarization by education, but another part is about more regular participation by younger voters in “off-cycle” primary elections at higher rates—a trend that really started to noticeably take off after Donald Trump’s surprise Presidential win in 2016, and the millennial generation aging into the usual range when people begin voting at higher rates.

The 2021 primary also featured a few other interesting developments that could prefigure changes going forward.

First, nobody bothered to challenge Rebecca Rhynhart in either the primary or the general election, which is pretty odd considering that she was only recently a first-time candidate in 2017. Rhynhart won that race over Alan Butkovitz in such a rout though, that—combined with her strong fundraising numbers—all credible challengers evidently concluded it wasn't worth it to run against her.

Still, it's amazing that Democratic City Committee didn't even bother to find a sacrificial lamb candidate to run against her anyway, as usually happens after reformers beat machine candidates. Rhynhart's unchallenged reelection and strong political brand are sure to secure her spot among the most commonly mentioned prospects for Mayor in 2023.

Also noteworthy was the odd outcome where Caroline Turner—the Court of Common Pleas candidate who drew the top-left ballot position—failed to win even one of the open seats. This never happens. Drawing the top-left position is seen as an effective coronation, with the party and campaigns planning their endorsement strategies around the certainty of that person winning. But Turner did not win the support of Democratic City Committee, and party Chairman Bob Brady was even reported to have asked her to drop out of the race. Turner’s only endorsers were the 1st, 2nd, and 22nd Wards and organizations associated with Reclaim Philadelphia, 215 People’s Alliance, and Working Families Party, according to the 22nd Ward Open Caucus’s excellent comprehensive spreadsheet of all the endorsements in the 2021 primary.

That’s a surprisingly short list for a candidate whose victory was presumably viewed as a fait accompli.What may have made the difference was Democratic City Committee’s campaign for their judicial slate, where endorsed candidates also went 7 for 8 on the Court of Common Pleas, and also won all 3 Municipal Court races

What may have made the difference was Democratic City Committee’s campaign for their judicial slate, where endorsed candidates also went 7 for 8 on the Court of Common Pleas, and also won all 3 Municipal Court races. This year the party sent out a few pieces of direct mail to reach vote-by-mail voters who wouldn’t be receiving the usual paper sample ballots at the polls on Election Day. One individual affiliated the effort (who won’t be named because the conversation occurred on a private Facebook group) credited City Committee’s success to their “early endorsements...trustworthy, verified petition program for endorsed candidates, data-driven mailers, and an invigorated Committee structure.”

In other years, City Committee’s recommendations would usually include at least a few Not Recommended candidates, so an all-Recommended slate by City Committee feels like a political win by the Bar Association to raise the salience of their stamp of approval.