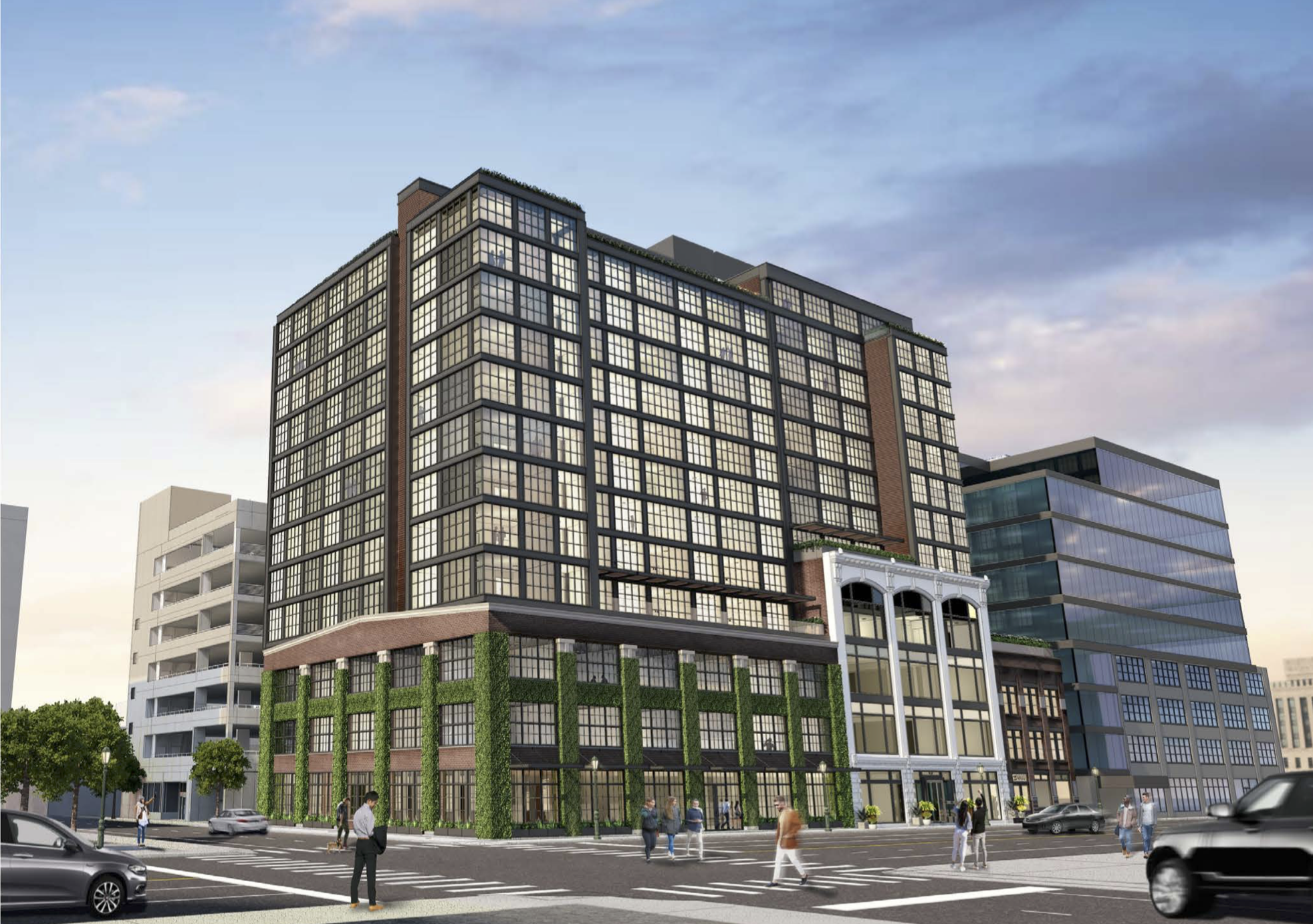 The Housing Trust Fund is set to receive its second-largest single payment, of nearly $1 million, thanks to a 222-unit over-build development in the works at 23rd and Market St.

To be able to build at a greater density than would otherwise be allowed, the builder is utilizing the city’s Mixed-Income Housing density bonus program, and will make a payment of $948,330 into the Housing Trust Fund.

Because of its size, the project must go before Civic Design Review for an advisory meeting about the design, but it is not seeking a zoning variance, so it can be permitted by-right as-is, according to Kyle McShane, author of the Rising Real Estate website.

The project is utilizing the moderate income floor area ratio bonus and the underground parking floor area ratio bonus. It is allowed to proceed by-right on the 25,287 square foot CMX-4 zoned parcel. The overbuild will bring the total building height to just over 202 feet and will be constructed of primarily black aluminum panels and glass curtainwall. The original base of the building on the 23rd St. side of the project will be covered in a living green wall."

For context, the City’s only been spending about $20 million on the Housing Trust Fund in total, so getting almost 1/20th of that from a single project is a big deal. The single-largest payment into the fund since the program went into effect in 2019 is still set to be $2.5 million from a high-rise project near Rittenhouse Square.

The Mixed-Income Housing program has been a reliable money-maker for the Housing Trust Fund since it was first passed in 2018, but has recently come under attack from misguided preservationist activists and Inquirer columnist Inga Saffron, who had blamed it for a couple of rowhouse demolitions in Graduate Hospital, without evidence.

Those attacks led to Councilmember Kenyatta Johnson and City Council passing a ban last week on the option of making Housing Trust Fund in-lieu payments for certain projects using the Mixed-Income program in zipcode 19146. This, despite the fact that the 19146 zipcode is also one of the top recipients of Housing Trust Fund spending on things like basic systems repair, and other housing aid.

Back in July of 2020 we wrote about an early report on the Mixed-Income Housing program that showed it exceeding revenue projections by quite a bit, so we checked in on where things stand today to see what happened in 2020—and by implication, what the stakes are for City Council making changes that could turn off the money printer.

As a quick aside, there’s a timing issue to this that makes it a little difficult to clearly describe what’s happening, since there’s a lag between the announcement of intent to pay and the eventual payment. The city first learns of a builder’s intent to pay into the Fund when the builder applies for zoning permits. And then later, when the project is actually built, the builder signs a deed restriction with the city, and payment is submitted at that point. However, not every project that receives zoning approval is built in the end, so you have to think of the projection associated with the zoning permits as more of the upper bound of what’s possible

Initially, City Council had projected that the Mixed-Income Housing program—passed in 2018, and in effect for 2019—would raise about $3.6 million a year. That projection was then revised upward to $10 million over two years in City Council’s Poverty Action Plan, after early evidence showed the program was beating the initial revenue expectations.

Here’s what the program ended up raising in 2019 and 2020, the first two full years of its existence:

The 2020 “anticipated pipeline” number from the City still includes some number of projects that were permitted in 2019 and still haven’t been built, but what’s clear is that the program is projected to meet, and very likely exceed City Council’s projections in the Poverty Action Plan even during a pandemic year when all other tax categories saw revenues nosedive.

Imagine what could happen in 2021, with a crazy housing shortage that’s been building up all year, the tax abatement deadline kicked out by one additional year encouraging more housing to be pulled forward in time, continued low interest rates from the Fed, and mass vaccinations leading to stepped-up economic recovery through the second half of the year.

It seems very likely that the underlying economic conditions are ripe for another banner year for Mixed-Income Housing revenues and the city Housing Trust Fund, if City Councilmembers can just manage to stop themselves from destroying the program for no good reason.

Subscribe to our weekly email newsletter for more news, analysis, and opportunities for action