Who Will Control the PA General Assembly? 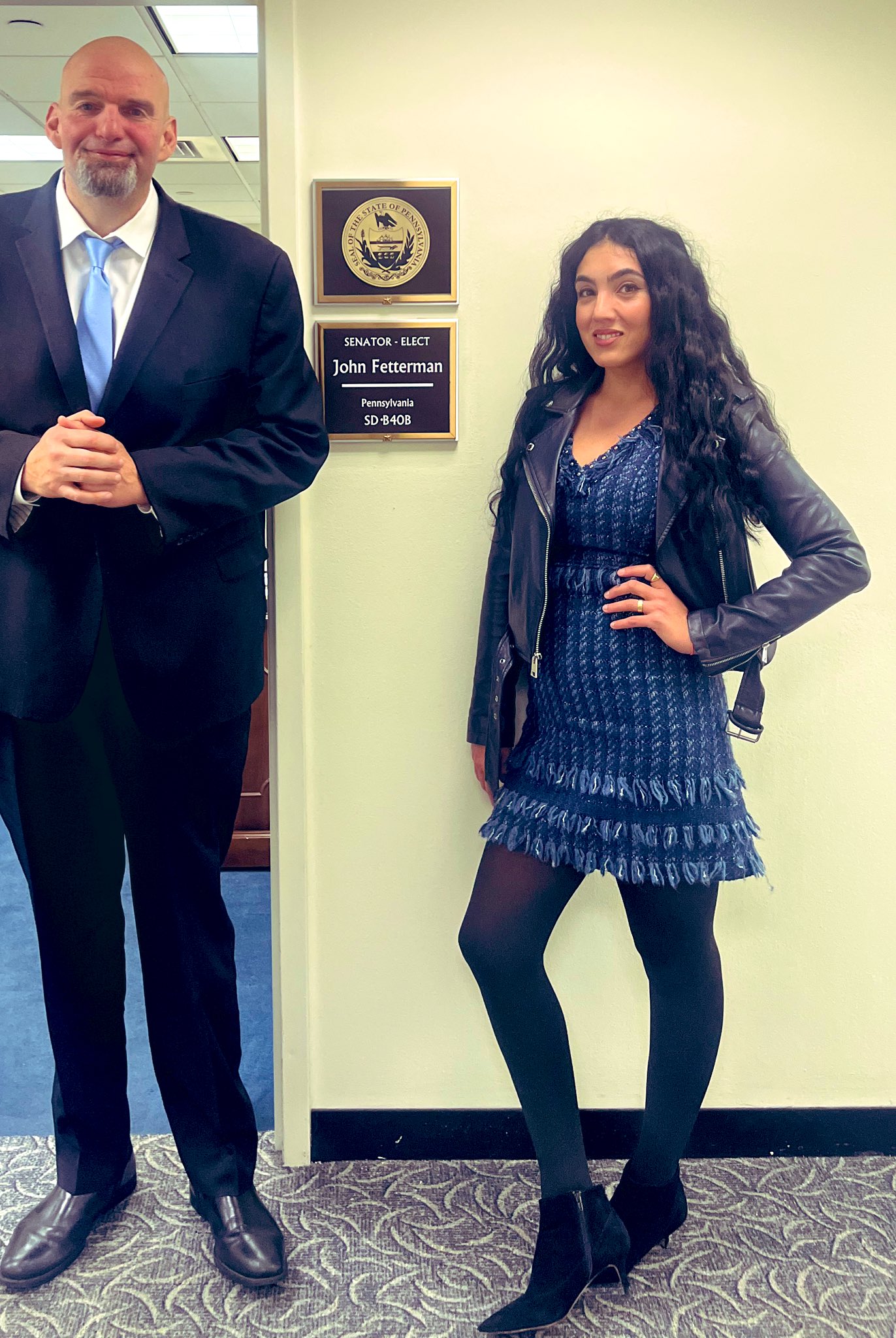 The 2022 general election in Pennsylvania was full of surprises, most significantly the better-than-expected showing by Democratic Senate candidate John Fetterman, who bested Republican nominee Mehmet Oz, and the possible change in partisan control of the PA General Assembly.

Nationwide, the strong results for Democrats bucked the more typical pattern where voters tend to swing toward the party opposite whoever won the last Presidential election. The difference in 2022, according to the emerging conventional wisdom, was the Supreme Court’s Dobbs decision overturning Roe v. Wade. Indeed, state-level ballot measures protecting abortion rights enjoyed a set of flawless victories from coast to coast, including in some pretty hostile terrain, and Democratic candidates generally outperformed expectations outside of a few specific places like New York and Florida.

Nationally, Democrats’ stronger-than-expected performance was largely owed to disproportionate turnout from Gen Z and younger Millennials, and that pattern also held in Pennsylvania. According to data from CIRCLE at Tufts University, voters under 29 netted John Fetterman 120,000 votes of his 185,000-vote total.

Democrats Are Set to Take the State House…Or Are They??

The situation in the PA General Assembly is still unfolding and the outcome may not be known for weeks. Control of that Chamber had come down to just two races in the Philly suburbs, and Republicans needed to win both to retain their majority over the next term. That didn’t happen, but it doesn’t mean Democrats will necessarily get to vote in a Speaker from their party right away for reasons we will explain.

Democrats have not controlled the PA House since 2010, but the most recent round of redistricting resulted in some more competitive legislative maps for Democrats partly as a function of the party’s majority on the state Supreme Court, which provided a bulwark against unfair gerrymandering. Combined with a net population shift over those ten years toward Southeast and Central PA, Democrats were teed up to do better than they had in the past, though no one involved in state politics and elections seemed to be publicly predicting they would flip the chamber.

House Democrats have already held a press conference in Philadelphia declaring that they won the majority, though the situation is not so clear-cut.

In the last two races to be called that would decide control of the Chamber, Democratic candidate Mark Moffa conceded the 142nd District election in Bucks County to Republican Joseph Hogan, while Democratic candidate Melissa Cerrato prevailed against incumbent Republican Todd Stephens in a squeaker in the 151st District. An updated count and a resolution to ballot challenges had put Cerrato up by 58 votes as of Thursday afternoon.

With those races decided, Democrats won 102 seats to 101 seats for the Republicans, but the chamber will still be split 101-101 for now because the late Rep. Tom DeLuca passed away between the primary and the general election. One important wrinkle in this situation is the open question of whether the General Assembly leadership must be elected by 102 votes, or just a simple majority of those present and voting. 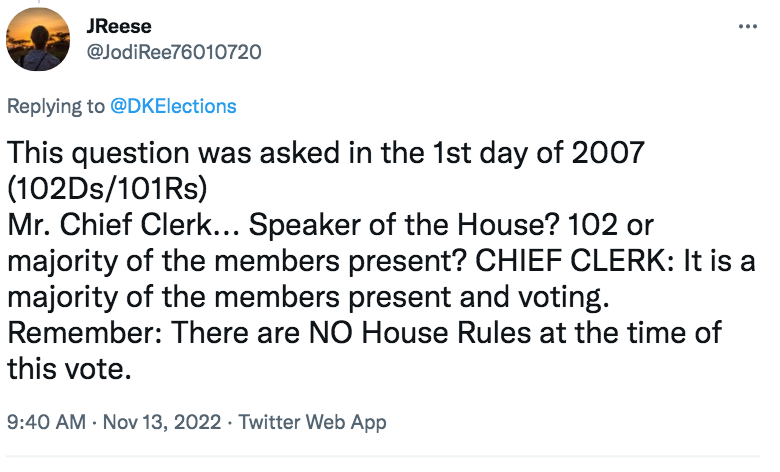 It remains unclear how this will get resolved in the short term, since in January, state Reps. Austin Davis and Summer Lee will resign from their seats to take their new positions as Lt. Governor and member of Congress, respectively. Rep. Austin Davis is not required to resign until January 17th. Those two resignations will temporarily reduce the Democrats’ margin to 99-101 for some duration until special elections are conducted to fill the three open seats from the late Rep. DeLuca, along with Davis, and Lee.

The choice of when to schedule the special elections will fall to the chosen Speaker, and they would likely be scheduled for early spring, after which point the Democrats will likely be up again 102-101. The most competitive seat of the trio, Rep. Austin Davis's 35th District, is one that President Biden won by 16 points. Biden also won the 32nd (DeLuca) by 26 points and the 34th (Lee) by 62 points.

Because of the possible 102-vote threshold for the leadership vote, either the Democrats or the Republicans may need to convince a member of the opposing party to vote for their leadership prospects. Expect a backroom-deal-making bonanza to kick into overdrive for this interim leadership contest, even as Democrats appear likely to take the majority in earnest sometime next spring following the special elections.

That could take the shape of something like the 2007 Speaker vote, where Democrats had a one-seat majority in the General Assembly, but Democratic Speaker Bill DeWeese didn't have the votes, so the night before the leadership vote, Philadelphia non-leadership Republican Denny O'Brien was agreed upon as a compromise Speaker candidate and won with 105 votes.

The other bit of last-minute drama unfolding is that Rep. Summer Lee—newly-elected to Congress and not yet resigned from her State Rep position—is someone whose vote Democrats need for both the tight General Assembly and U.S. House Speaker leadership votes, which are scheduled to happen on the same day, January 3rd. According to Daily Kos Elections, there has been some flexibility on the timing of the U.S. House Speaker vote, though both sessions begin at noon on the 3rd. In 2019, the Speaker vote was held at 3:15 PM, and in 2021, it was held at 5:50 PM. According to Google Maps, it's about a 2-hour 18-minute drive from Harrisburg to D.C. 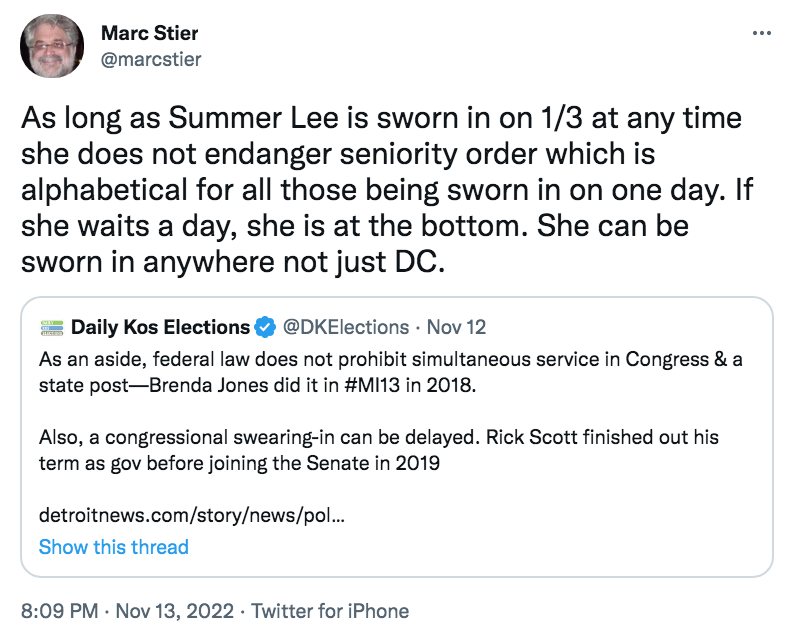 What Was Behind Democrats' Strong Performance?

The election post-mortems are still rolling in, and one of the more interesting trends in PA was how both Josh Shapiro and John Fetterman were able to cut into Republicans’ margin pretty significantly in some places that went very solidly for Donald Trump for President the last two Presidential cycles. And those outsized margins at the top of the ticket made it harder for downballot Republicans to hang on. 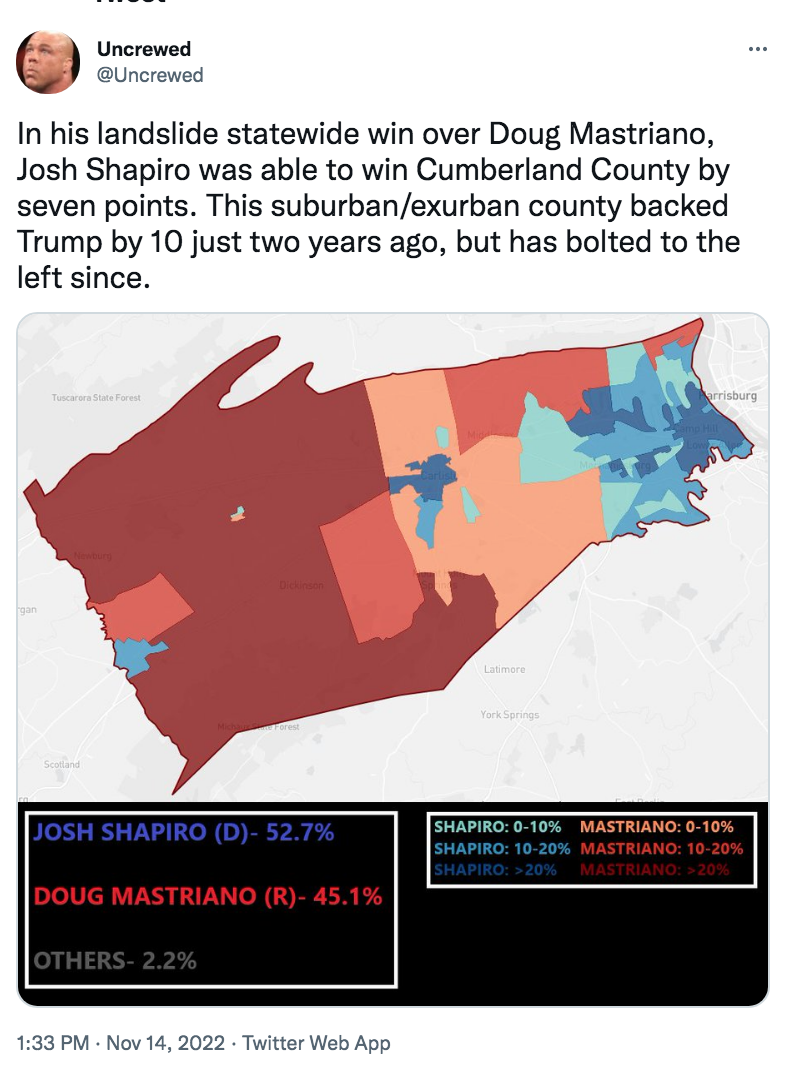 Pittsburgh-based historian and politics writer Lara Putnam has pointed out that the PA 2022 general election outcome represented a return of the Democrats’ 2018 coalition demographics, but even more pronounced. In 2018, the ‘Middle Suburbs’ where most of the state’s voters live swung hard against Donald Trump in the mid-terms, but then had begun to shift hard toward the Republicans. But once the Dobbs decision was announced, voter registration started shifting back toward the Democrats, and the statewide candidates ended up seeing some very impressive results there. 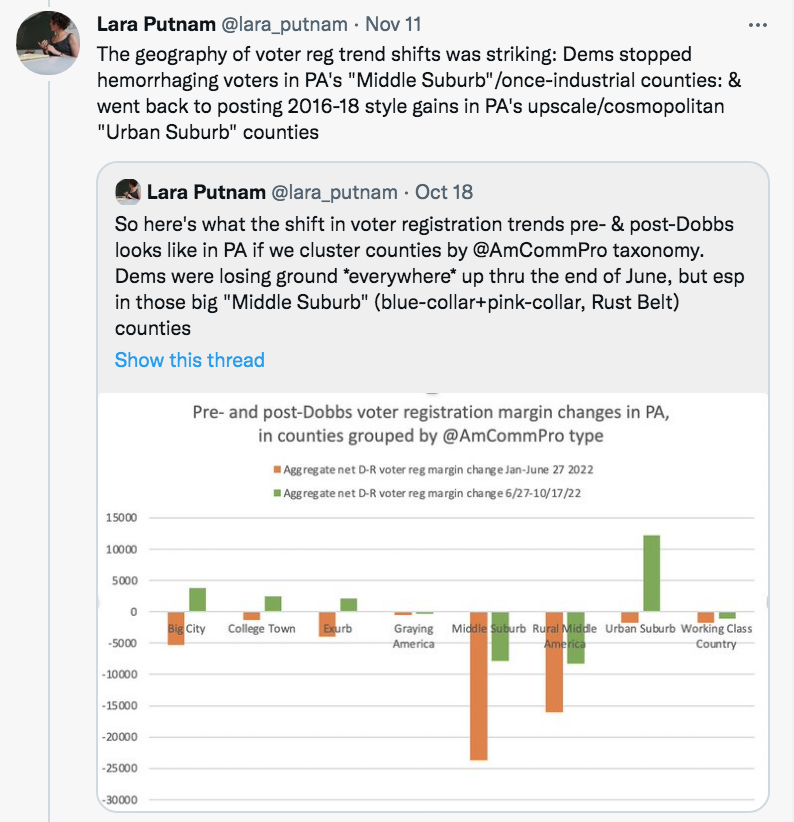 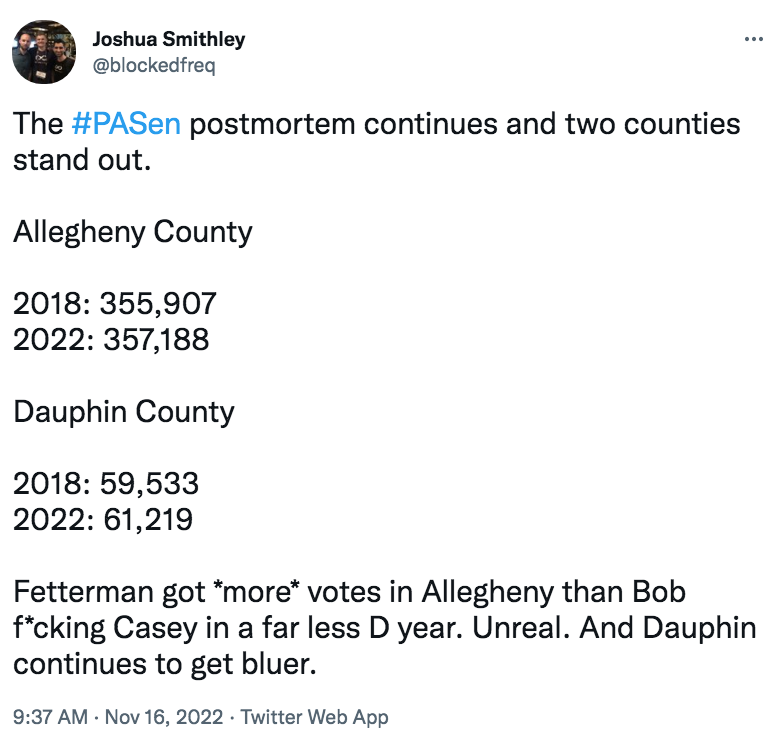 Democrats garnered a lot of votes “behind enemy lines” too. Greg Sargent at the Washington Post reported on a new analysis of 2022 election outcomes for the different geographic groupings, which found “[i]n Working Class Country counties, Fetterman shaved Oz’s margin of victory to 27 points, down from Trump’s 2020 margin of 36 points” and “[i]n Rural Middle America counties, Fetterman limited Oz’s gains to 31 points, down from Trump’s 37-point margin in 2020.”

In another example from Allegheny County, Putnam notes that Josh Shapiro matched Joe Biden’s raw vote totals in precincts that Donald Trump won with 51-60% of the vote, but in a much lower-turnout midterm election year.

The only place-grouping where 2022 Democratic turnout was notably weaker than in 2018 was in the Big City category, which was mostly a Philadelphia story. Stay tuned for tomorrow's newsletter where we will dig into that Philadelphia story a little more. 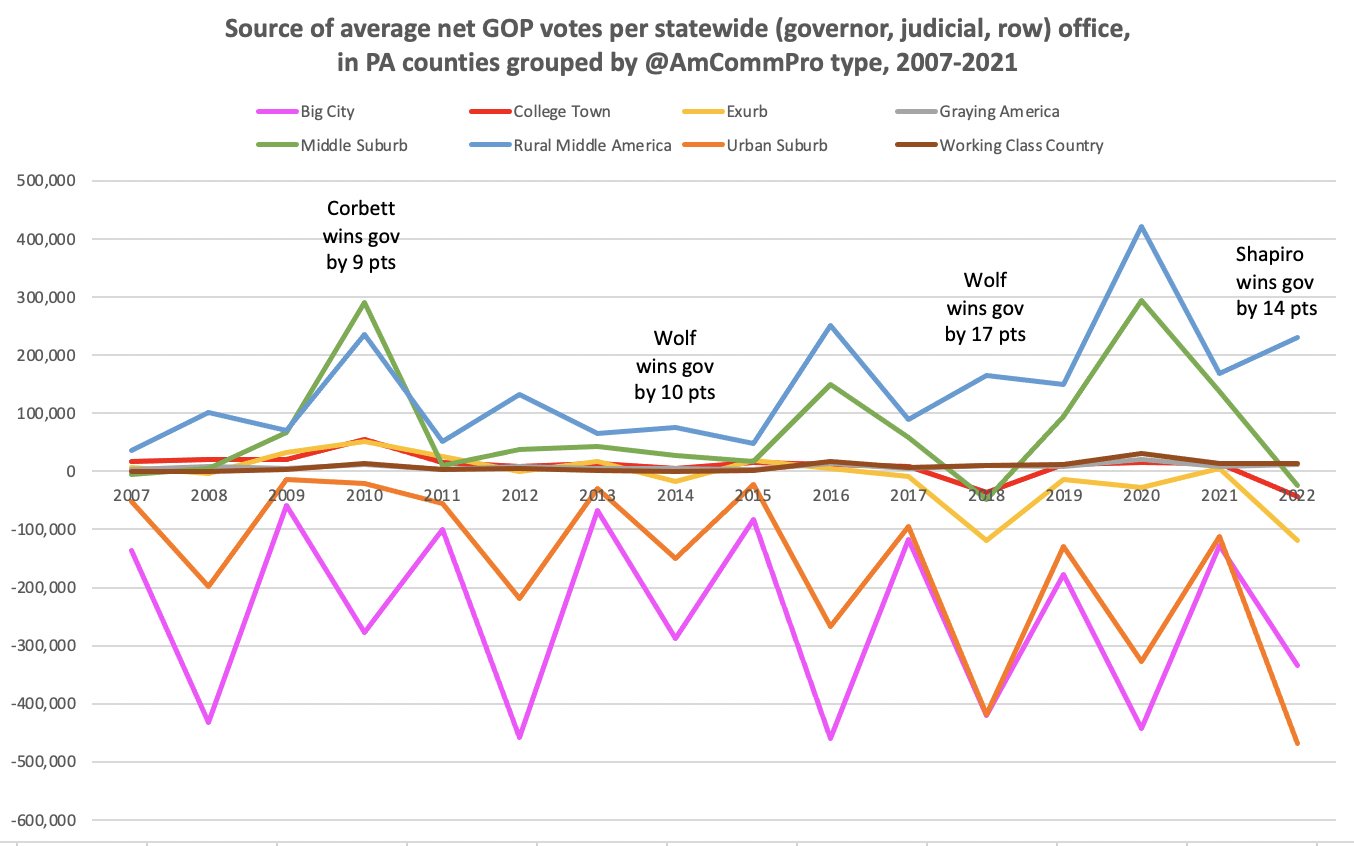