This Week: Two Chances to Give Feedback on New Voting Machines 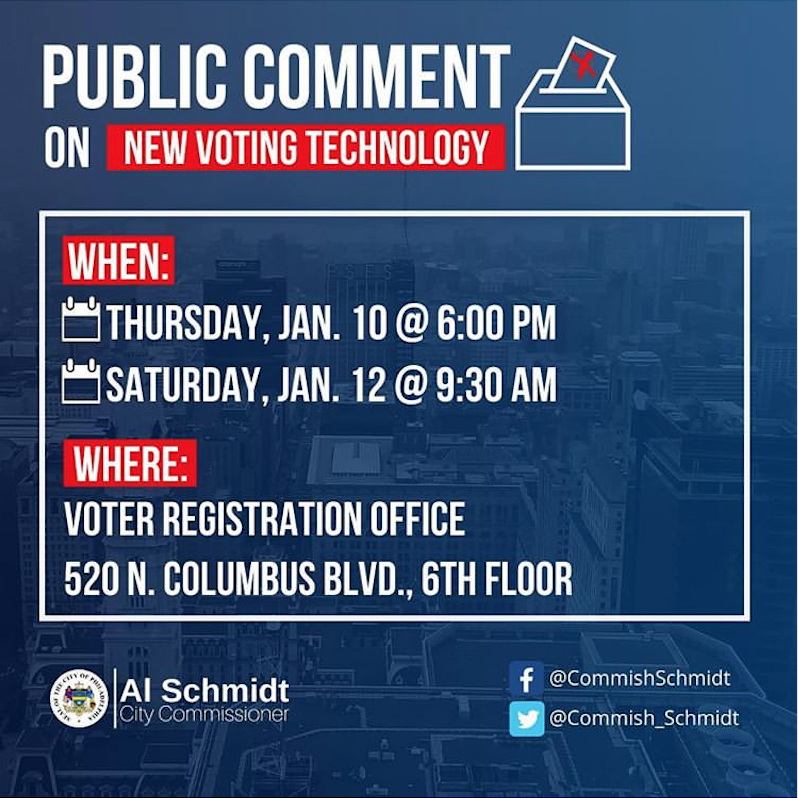 We've been writing about the slow-moving process to replace Philadelphia's voting machines before the Governor's deadline in 2020, and now the City Commissioners are evidently springing into action with a couple of public comment sessions on the new voting machines scheduled on a very tight turnaround of less than a week.

Commissioners Lisa Deeley and Al Schmidt posted information on social media about the pair of events happening this Thursday and Saturday where citizens can comment on new voting technology.

It's unclear from the City Commissioners' post about it what exactly the public is being asked to comment on, but we've confirmed a few details and it sounds pretty open-ended. It's going to be a public meeting format similar to a City Council hearing where electeds take testimony, with a stenographer there to record comments. There won't be examples of the new machines present—this is just to help inform the City Commissioners about what the public wants as they consider which machines to purchase based on the certified menu of options approved by the PA Department of State.

In addition to the election security concerns, one issue we've been banging the drum about throughout this process is that the fate of changes like Ranked Choice Voting and other alternative voting systems like proportional representation or fusion voting that we might want to try at the state level sometime in the future, are directly bound up in what kinds of machines we're about to buy.

As a prerequisite to changing any voting rules, we first need the machines to be technologically capable of running other kinds of elections than the standard First-Past-the-Post system most U.S. cities and states use. Anybody who's interested in voting systems reform should try and make it to one of the sessions to raise that issue with the Commissioners.