Plan Your Run for Committeeperson With This New Interactive Map 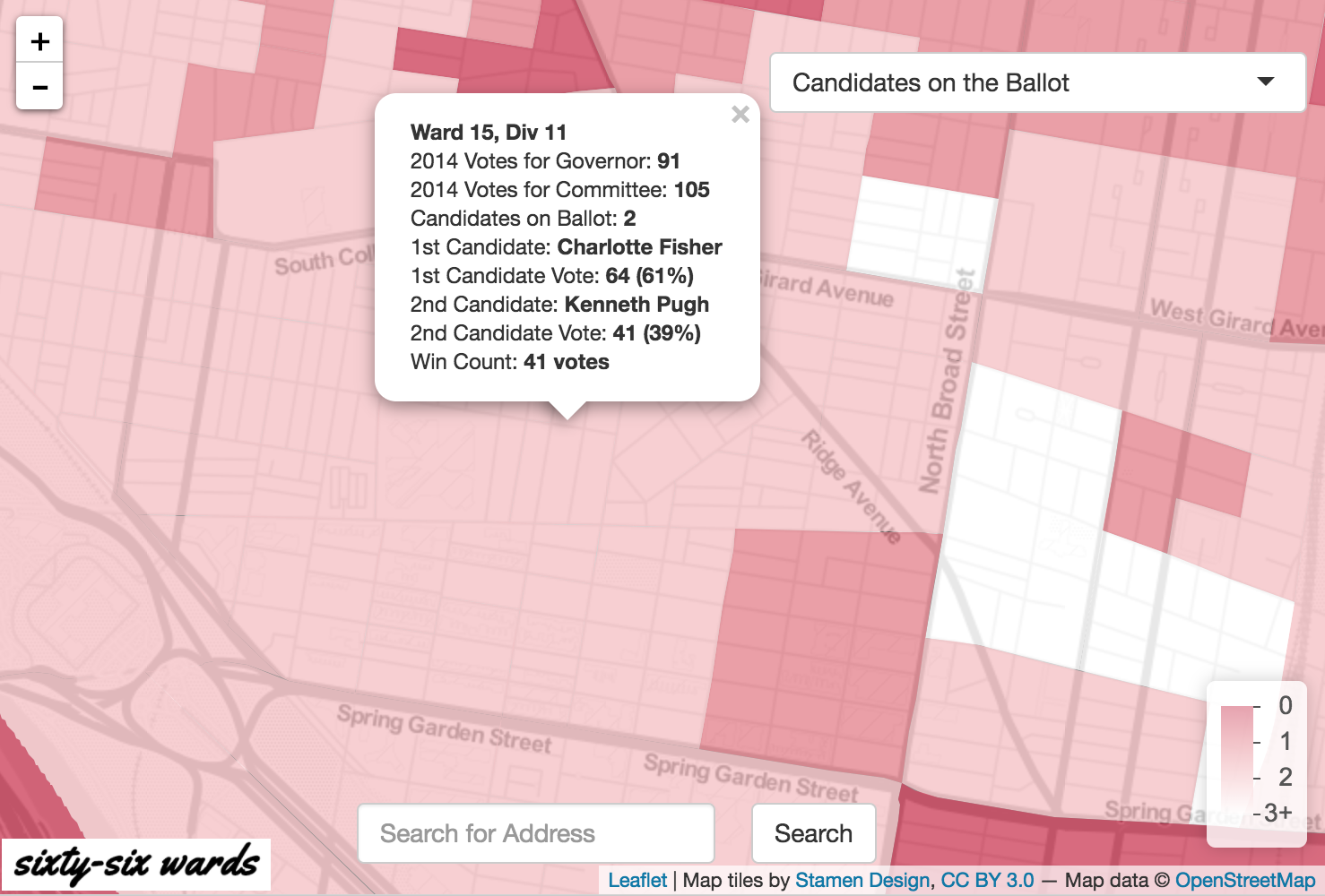 Last week The Hill ran a story about a Philly resident who won a neighborhood Board of Elections seat this year with one write-in vote from himself. This got a lot of national traction, which seemed weird to many of us who follow Philly politics since it's such a common occurrence. In a follow-up post on this, Dave Davies reported that 71 people won Board of Elections seats this way in 2017.

Analyzing the 2014 ward elections in a recent post at the Sixty-Six Wards blog, Jonathan Tannen found that 95 people won Democratic committeeperson seats with a single self-write-in vote that year. Keep in mind when reading this that each division elects two committeepeople:

In 2014, 348 of the 3,372 Democratic committee positions went unfilled. An additional 95 candidates won with only a single vote, and 214 winning candidates received ten or fewer [...]

For the vast majority of these committeeperson races, you only need between 20 and 80 votes to win, and you rarely need more than 140 votes. For context, each division typically has between 500 and 1,200 registered voters. It's also pretty rare—only 14% of divisions!—for there to be a competitive election with more than two committeeperson candidates on the ballot.

This combination of a lack of competition, a low number of (10) signatures required to get on the ballot, a low number of votes required to win, and the disproportionate influence committeepeople can wield in primary elections is exactly why Philadelphia 3.0 is urging people to run for one of these seats in 2018.

Committeepeople are the Parties' representatives at the division level. A division is a unit of a ward, and each division elects two committeepeople from each party. There are 66 wards citywide, and they typically contain between 20-25 divisions (although there are some big outliers.) The committeepeople who win their elections next May will then vote for ward leaders shortly afterward to represent their wards on the Democratic and Republican City Committees.

Those ward leaders then vote for the party Chair and vote on endorsements for state and local races. In some wards, the committeepeople get a vote on endorsements, but this is not typical, and that's one of the things we're hoping to change with this effort.

Being a committeeperson in your ward is kind of like being a political block captain for your little slice of the neighborhood. You register new residents to vote, help bring candidates out to meet neighbors, circulate petitions for candidates you like, make recommendations about who to vote for, and then help remind neighbors to vote on Election Day.

If you do it well, you could have a lot of influence over how your division votes in elections all up and down the ballot, especially in party primaries. Anybody interested in learning more about this should find their division and sign up to get a jump on running next year.

The Sixty-Six Wards post has a great package of maps (embedded at the bottom of this page) that any prospective committeeperson candidates should check out to start planning a campaign. The time to start planning is now, as the window for collecting signatures to get on the ballot opens for three weeks in early 2018, between February 13th and March 6th.

The first thing you need to figure out is how many votes you need to win, and there are a few different ways of looking at that. The past isn't predictive, but if we assume 2018 won't be radically different from 2014, we see that in Division 15-11, for example, there were 105 total votes cast in the committeeperson election, and two candidates.

The top vote-getter was Charlotte Fisher, with 64 votes, and the second vote-getter was Kenneth Pugh, with 41 votes. So 41 votes was the minimum number somebody would've needed to win a seat in this division in 2014. Interestingly, the committeeperson race had more votes than the Governor primary!

Looking ahead to 2018, you want to plan on getting more votes than Charlotte Fisher did in 2014. To be safe, you should plan to get 70 votes—about 10% more than Charlotte did.

Seventy people is a knowable number of people, so when you go out collecting your 10 signatures to get on the ballot (petitions run from February 13th to March 6th), your aim should be to figure out who exactly those 70 names will be by keeping a list of the names and addresses of people you think will vote for you, based on your conversations at the door.

This map is great because it shows the total number of candidates who were on the ballot in your division in 2014, not just the two winners, so you can see how many total votes might be up for grabs and factor that into your plan.

On the dropdown bar, you can also select Number of Seats Left Vacant to see where the open seats are. Since the election is coming up soon, asking your ward leader to appoint you to an open seat doesn't really help you that much since you're just going to have to run again, but it's good to know whether you're running for a seat with an incumbent or a vacancy. And the 'Votes for Governor' number gives you a way to anchor how many votes you should plan to get even if there was no one on the committeeperson ballot line in 2014. 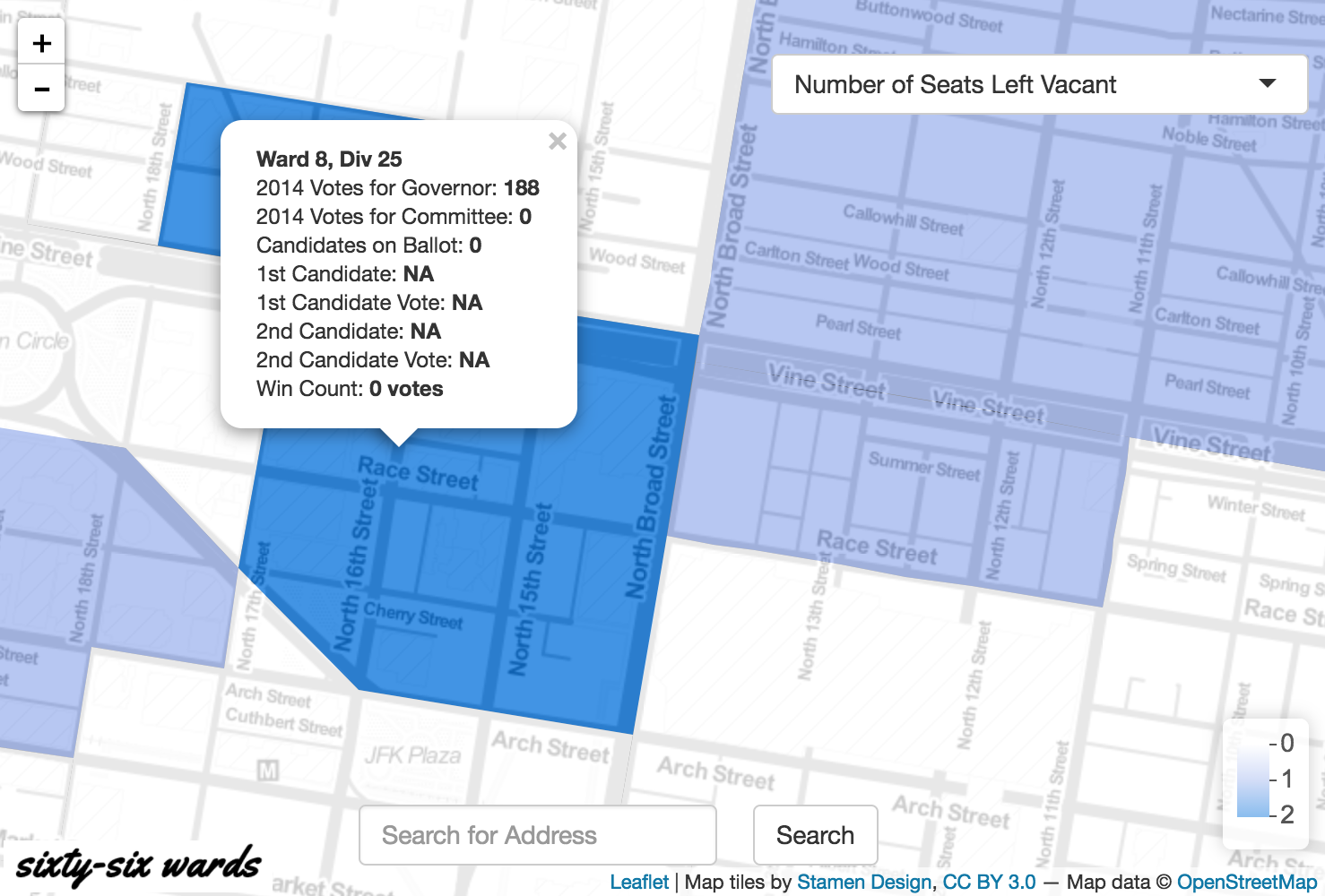 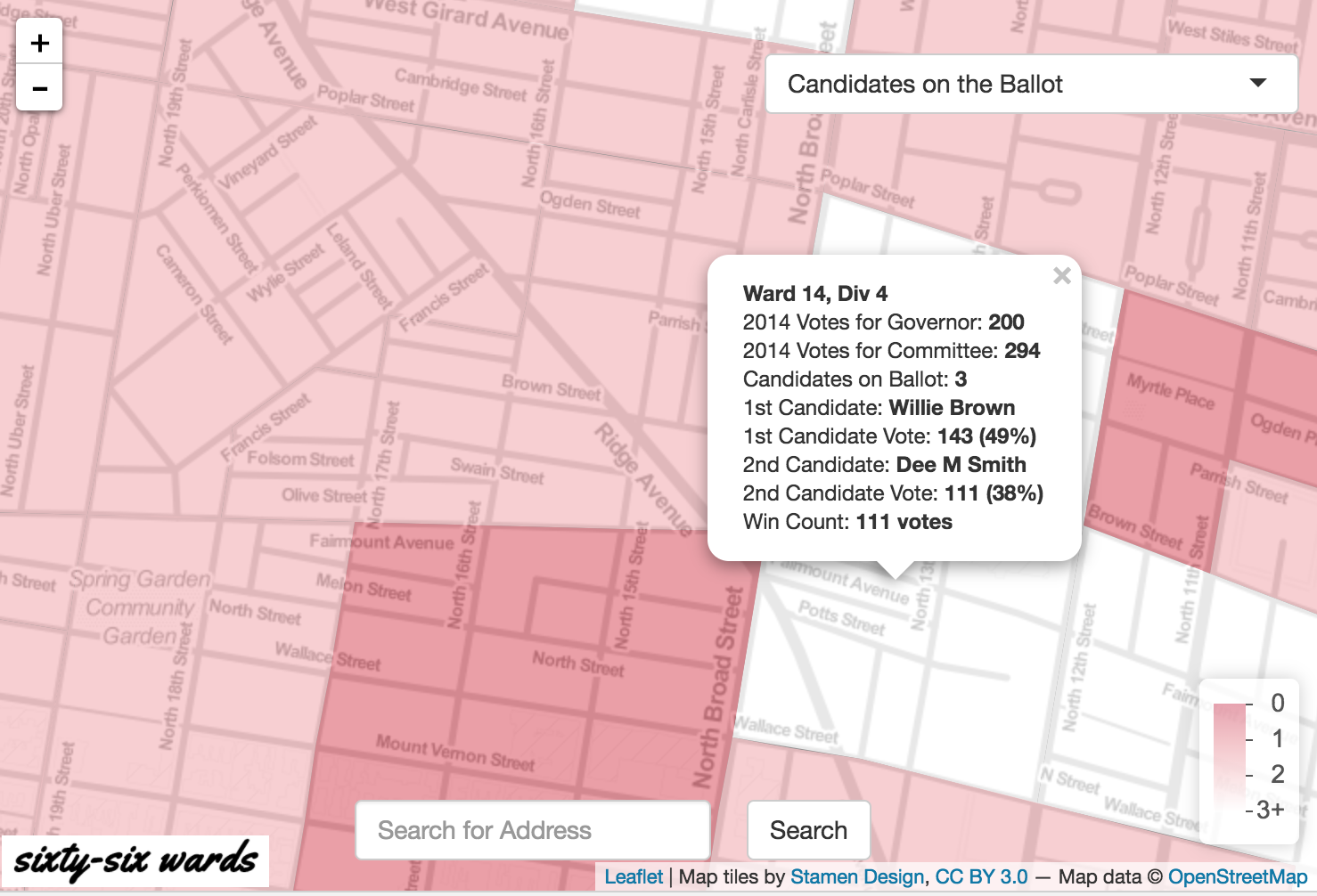 The 'Win Count (Votes to Second Candidate)' map is a bit of a wonky concept, but the idea is to look at the spread between the first and second vote-getter. Maybe the top vote-getter is a very active and well-known person, but the second person isn't. Or maybe the second person got in with a write-in. It's a helpful way to visualize the divisions where the second seat might be more winnable. In 51-03, for example, Dorothy Wallace got 61 votes, and Diana Mcrae got just 14 votes with a write-in. 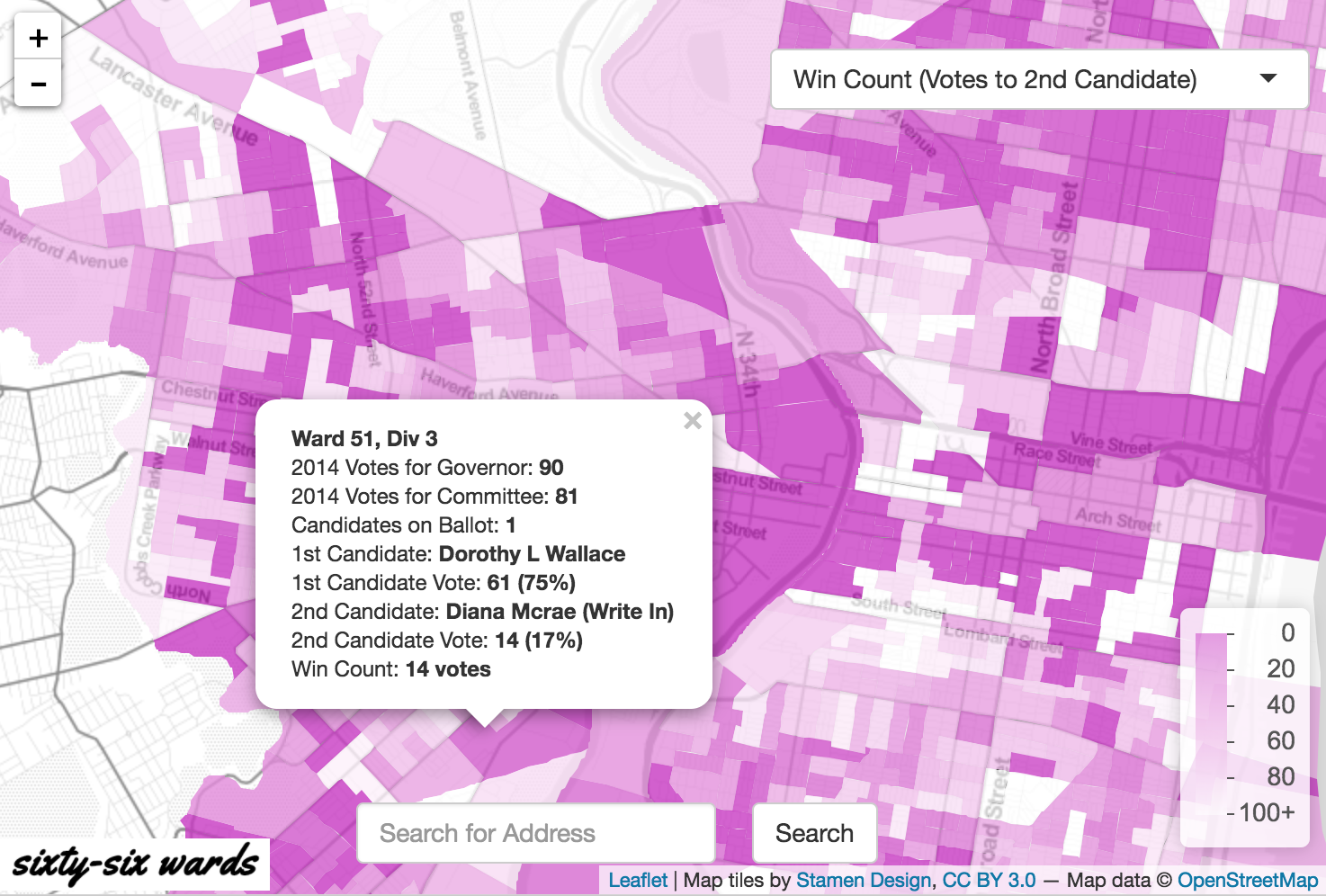 For anyone interested in changing the ward leaders in specific wards, the last map, 'Ward Percentage of Committee Vacant' is useful for seeing which ward leaders have lots of vacancies, and might not be so good at the job. The 45th ward, which covers Bridesburg in Northeast Philly, has fully 48% of its committee seats vacant. This could be an opportunity for people running in the 177th District primary for state representative (where the 45th is a big chunk of the district) to elect a slate of their supporters to the ward committee. 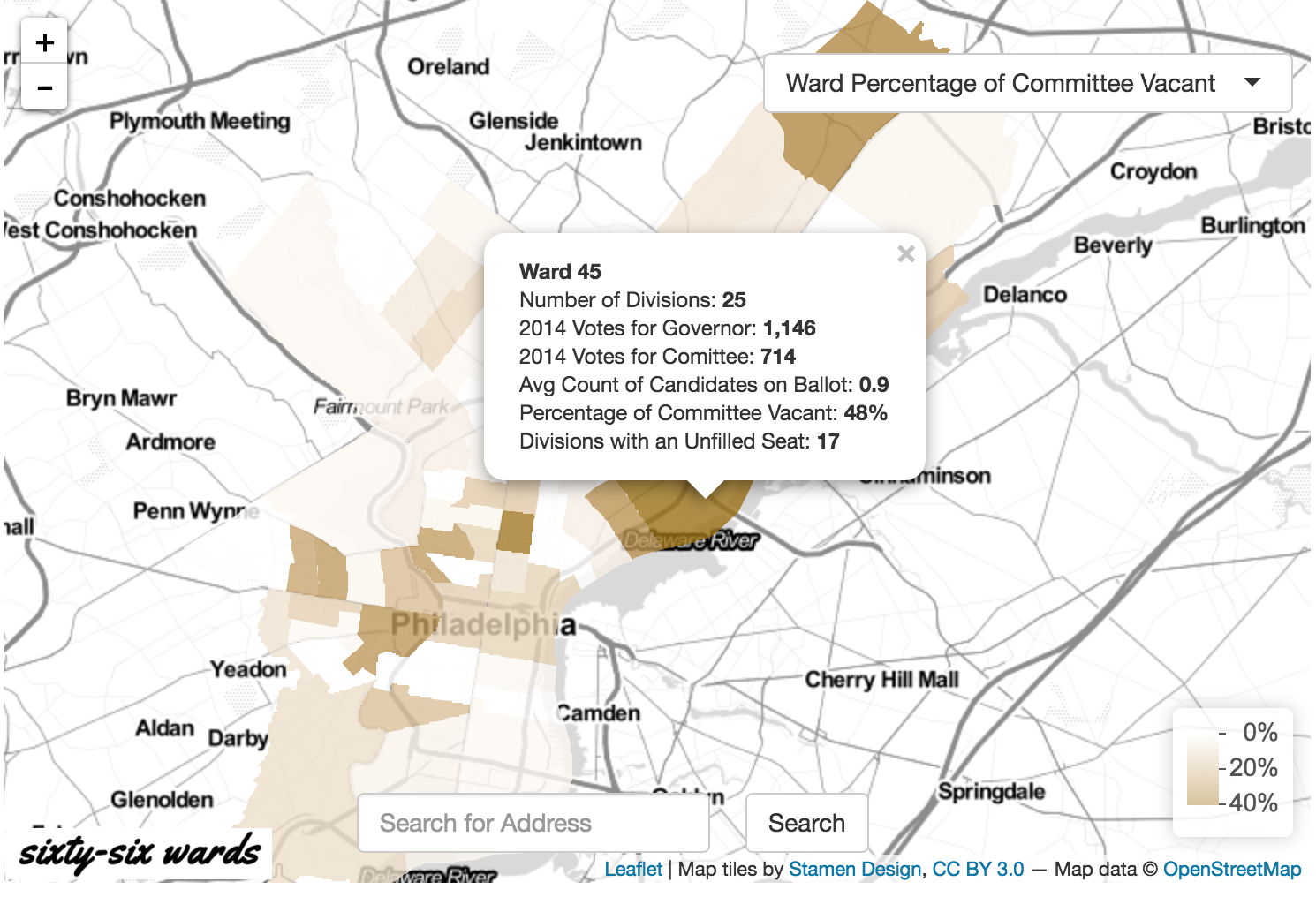 The map is now embedded on our Run for Committeeperson action page, so bookmark that for future reference. And if you're thinking about running, make sure to sign up and we'll help you get connected to efforts in your ward.