What Do We Know So Far About Philly Early Voters?

A little over two weeks into Philadelphia's early voting period, 155,838 people have voted, and about 40% of the requested mail ballots have been returned already. Election officials can't start counting those early votes until Election Day morning, but because the voter file information is public, and so is information about who specifically has voted, it's possible to make some inferences about where things stand based on statistics.

The polling and targeting firm TargetSmart has a great new website breaking down the different variables for several different states, counties, and Congressional Districts based on publicly-available voter information from state voter files. The site is being updated regularly with new information about who has voted. Let's take a look at some of the big trends the data show about who's cast their ballots already.

TargetSmart's "Party Score Rollup" is more of a partisanship prediction model than voter registration alone would give you, so it's not quite an apples-to-apples comparison, but the early trend is that Democratic voters are overwhelmingly represented among early voters, even outpacing their lopsided voter registration advantage as a fraction of turnout. Registered Democrats account for about 76% of Philadelphia voters, while Republicans make up 11.5%, and unaffiliated voters are just 9.4%. In 2020, Democratic constituencies make up about 93% of the voters in Philadelphia so far, according to TargetSmart. Across Pennsylvania, Democratic-leaning voters are also the most motivated. 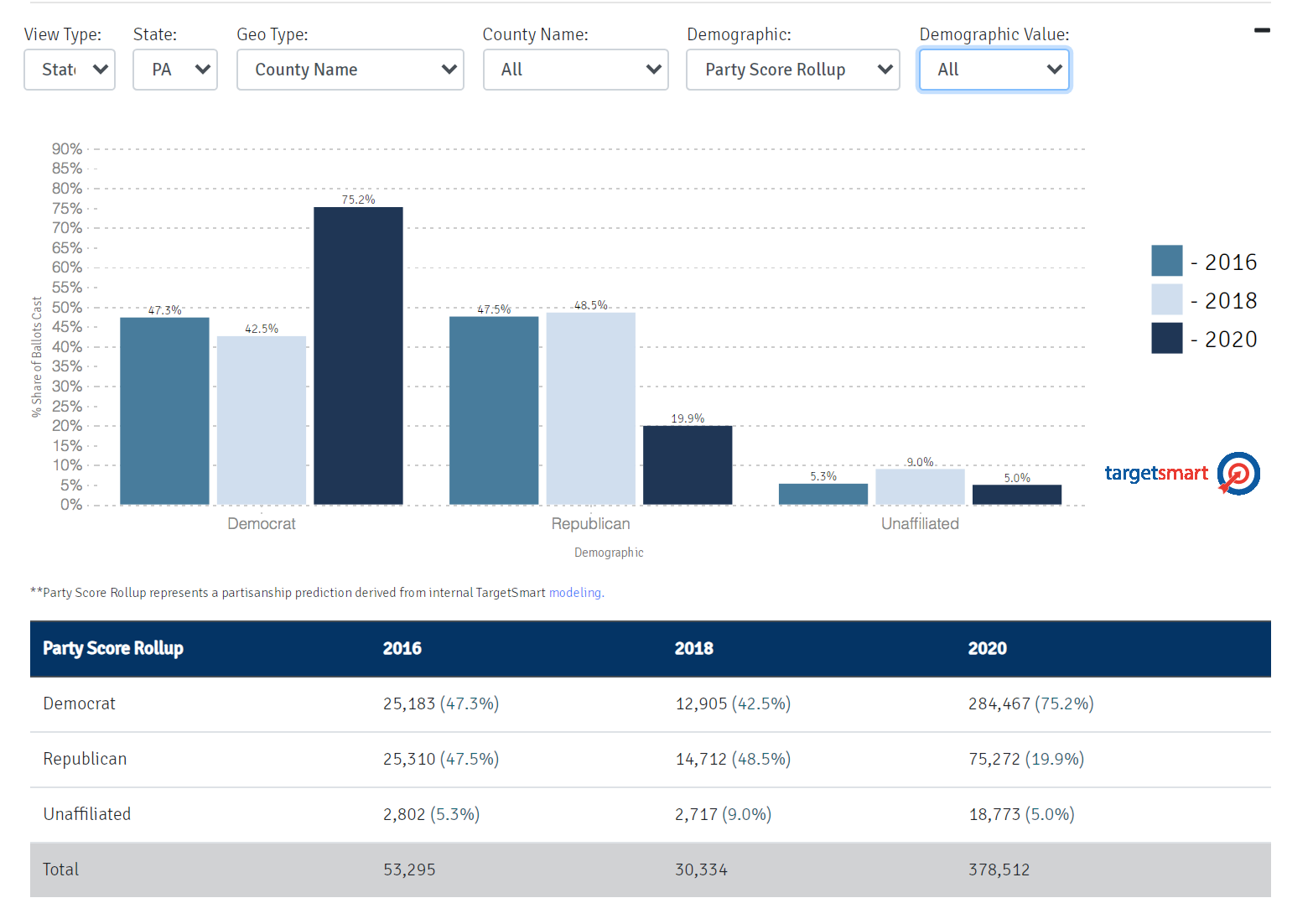 2. The early voting electorate skews white, but it's much closer to city demographics than we might have expected after the primary

In the primary, Black voters were much more likely to vote in-person than by mail, and they still are voting by mail at lower rates than white voters so far, but in the general election, the demographic voting trends come a little closer to mirroring the city's racial make-up.

Mike Johnson, Data Director for PA AFL-CIO, had found that much of the racial difference observed in mail voting patterns in the primary were less explanatory compared to educational attainment.

3. Early voting is being driven by women

Another notable thing about the early voting stats so far is the extent to which women are participating compared to men. Women make up 56.7% of the early voters in Philly, while men make up 41.9%.

As an aside, one thing to keep in mind about the past-year percentages is that they don't mean much since Pennsylvania only adopted a no-fault absentee voting system starting in 2020.

Seniors always vote in large numbers and at high rates, so this finding isn't particularly surprising, but due to our relative lack of experience with the new early voting options in PA, it's been an open question as to how much seniors would embrace these new options rather than stick with familiar habits. So far, voters in the 65+ bracket have cast about 39% of total votes.

5. Urban areas of the state are early-voting the most 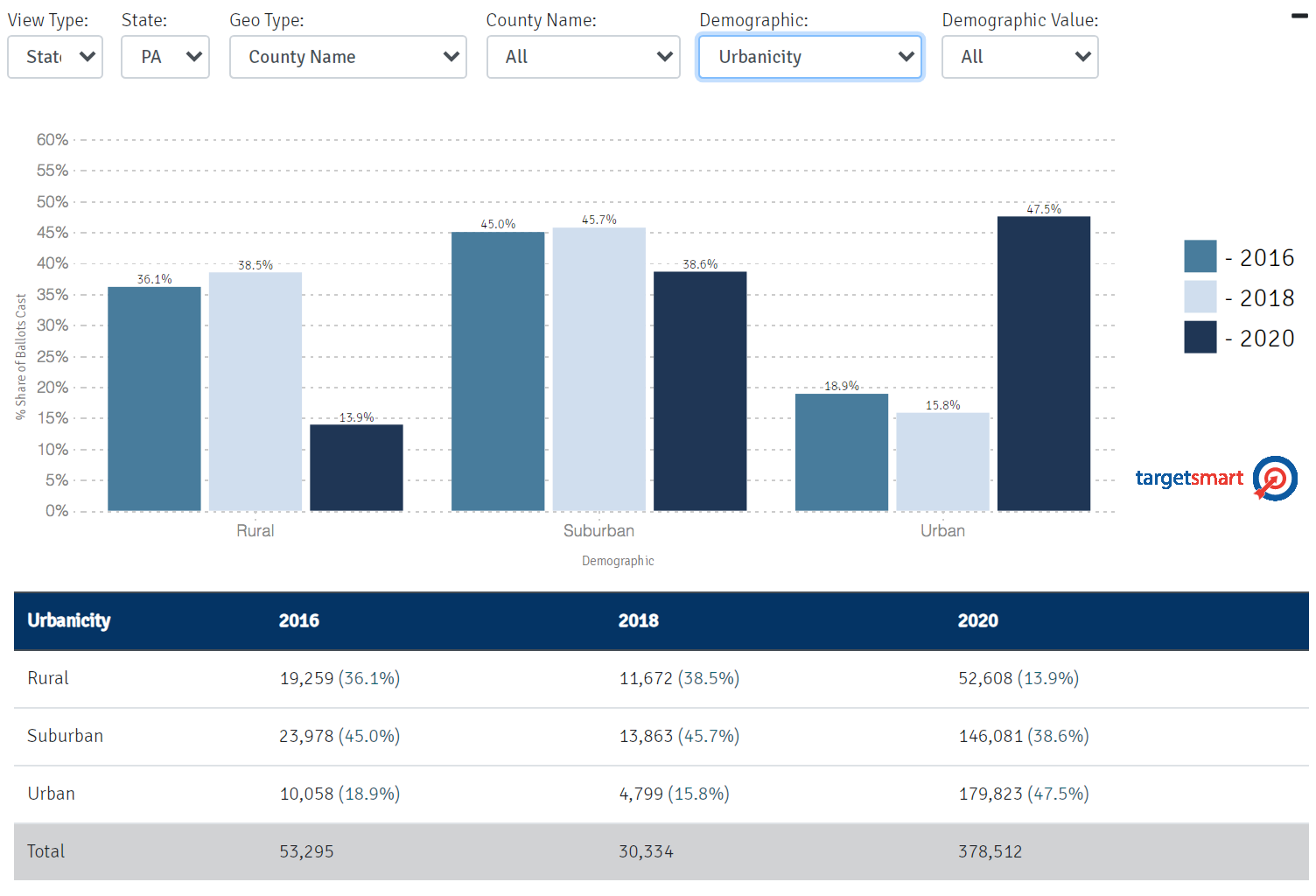 Partly this is just about where Democratic voters live, but it's interesting nonetheless because most PA residents live in suburbs, so the fact that more urban areas of the state are punching above their weight suggests there's more happening here. One plausible explanation is that denser places are able to support many more in-person early voting options in closer proximity to where people live, whereas lower-density places can't support quite as many. In Philly many people are able to access an early voting location just by walking there, so in addition to there being more opportunities around, there's less friction in accessing them.