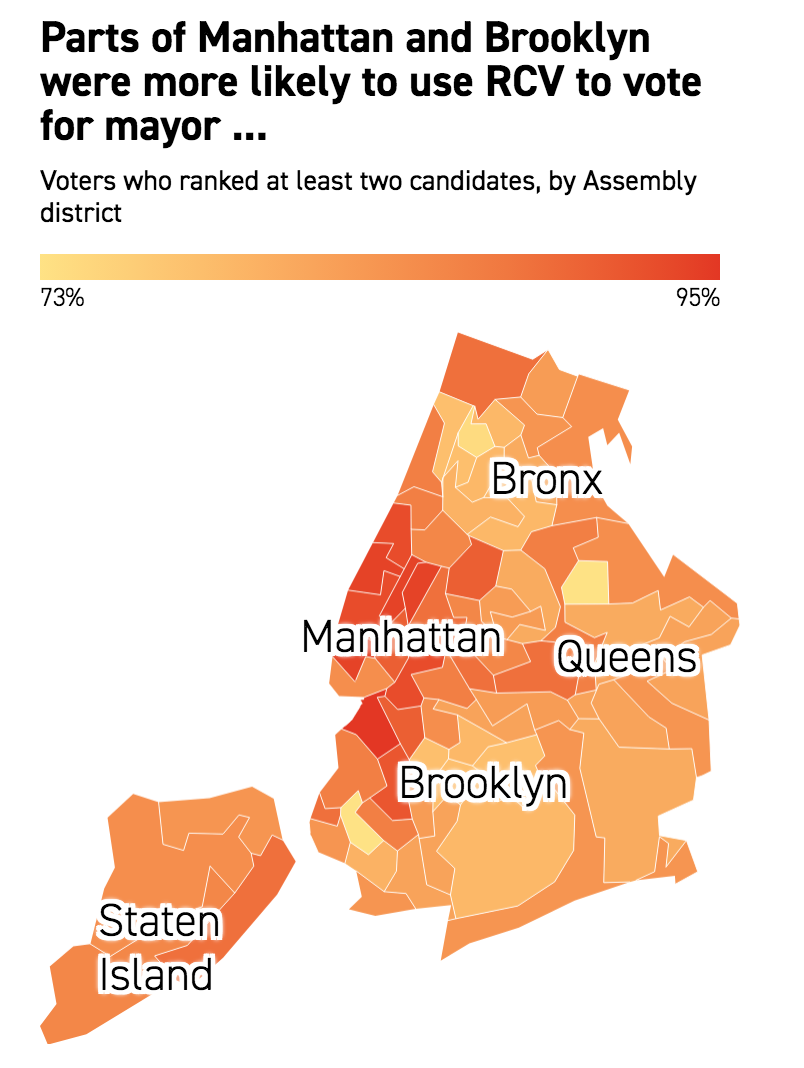 Prior to New York City’s most recent primary election, which was the first to deploy the ranked-choice voting system approved by voters, there had been a lot of arguments between the different candidates and party interests about how voters and candidates would fare under the new system.

Democratic Mayoral nominee Eric Adams had been raising concerns about ranked-choice when it looked like Sanitation Commissioner Kathryn Garcia might edge him out in the run-offs despite not having the most first-choice votes, while another Mayoral candidate, Maya Wiley, admirably continued to publicly defend the system as an overall benefit to women candidates and candidates of color despite her own candidacy arguably having been disadvantaged by it.

Adams of course won the primary in the end, but there have still been questions about how different neighborhoods and demographic groups used ranked-choice differently, and now that all of the ballots have been counted, there’s now more concrete information about what went down.

Politico’s write-up of this has a bit of an odd framing of the situation where they emphasize that low-income neighborhoods had less engagement with the ranked-choice option (which in this case means only voting for 1 candidate instead of several) but then further down the article we learn that the low-end of the participation scale was in the low 70% range—objectively a pretty high rate of participation! Some higher-income areas used ranked-choice at rates higher than 90%, so there was definitely a disparity, but what we don’t have here is a story about mass confusion over ranked-choice impacting the vote.

Overall about 86% of voters ranked their choices for Mayor, and on average chose 3.3 candidates to vote for. At the same time, voter turnout was also up overall, which deserves some more analysis as it relates to ranked-choice. Further down the ballot, in the race for Comptroller and legislative seats, there was more variation and some other geographic and income-based voting patterns came into play.

In the Democratic primary for the city's chief fiscal watchdog, only 62 percent of voters who participated used ranked-choice voting, selecting 2.3 candidates on average. A handful of high-income Assembly districts in Manhattan were among neighborhoods that employed ranked-choice voting most often, with around 70 percent of voters in those areas using the new practice.

But they were joined by many other areas with lower median household incomes: Voters in Assembly District 33 in Southeast Queens — a large voting bloc made up of Black homeowners — were among the most active users of ranked-choice voting in the city. Around 70 percent of voters employed the new system in the northern Bronx, which includes many Black and Latino neighborhoods, along with Assembly District 28 in the Forest Hills section of Queens, where half the population identifies as white and the median household income sits above the city average at $82,000.

Where 62% of NYC voters used the RCV option for the Comptroller race—not amazing but still really good in the first election!—63% of Philly voters last year who cast a ballot bothered to vote in our Controller’s race. Compare that to the 86% of voters who voted in the District Attorney election on the same ballot.

It’ll take more than one election to get a fuller sense of the patterns, and surely over more election cycles more voters will get used to ranked-choice and come to use it more. But what happened with this first ranked-choice NYC primary is likely to inform a lot of first impressions of it among elected officials in Philadelphia and elsewhere, so it’s important to get the narrative right. So far state Senator Anthony Williams is the only one talking about it, but it could catch on if more people see what really happened in 2021.