The unofficial election results are now available from the City Commissioners' office, so let's dig right in.

This was a general election in Uber-Democratic Philadelphia, so naturally it was a blowout for the Democrats. Larry Krasner won 54 of 66 wards, while Beth Grossman won only 12, mainly in the Northeast and Girard Estates. Krasner’s highest voting wards were in West and Northwest Philly, and greater Center City, while Grossman’s top three wards were the 58th, 63rd, and 66th in far Northeast Philly. Controller-elect Rebecca Rhynhart beat Republican Michael Tomlinson in 58 of 66 wards, or 87% of the wards. Tomlinson’s support was limited to just 8 wards in Northeast Philly. 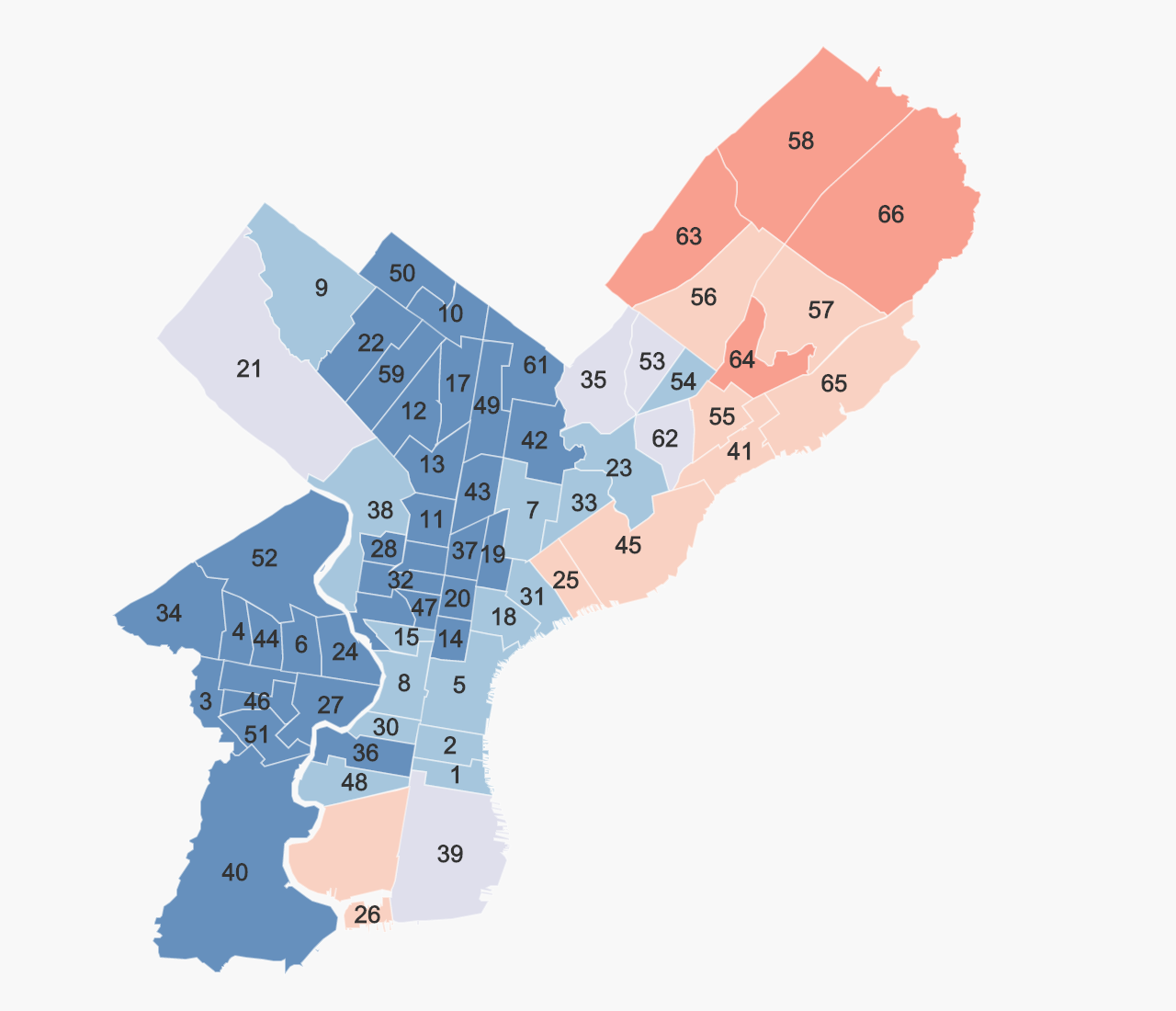 More Wards Voted for Rebecca RhynhartRebecca Rhynhart won more votes than Larry Krasner in 42 out of 66 wards, or about 63.6% of the wards, while Krasner won more votes in 24 wards. The largest number of votes Krasner outperformed Rhynhart by was 149 votes in the 46th ward (West Philly), followed by 71 in the 51st ward (West Philly), and 63 in the 50th ward (Northwest).The largest number of votes Rhynhart outperformed Krasner by was 1,023 votes in the 8th ward (Center City West), 958 votes in the 21st ward (Roxborough), and 859 votes in the 66th ward in the far Northeast, which went for Grossman. The 8th ward voted 88% for Rhynhart and 73% for Krasner, while the 21st ward voted 72% for Rhynhart, and 57% for Krasner.Rhynhart-Grossman WardsOf the 12 wards that Beth Grossman won, four voted for Rebecca Rhynhart for Controller. These included two Northeast wards, 56 and 41, the 25th ward in Port Richmond, and the 26th ward in Girard Estates. Krasner had won the Democratic primary in the 25th ward, but lost it to Grossman in the general election. TurnoutTurnout was about 20% citywide, which was unusually high for a District Attorney/Controller election in recent years. 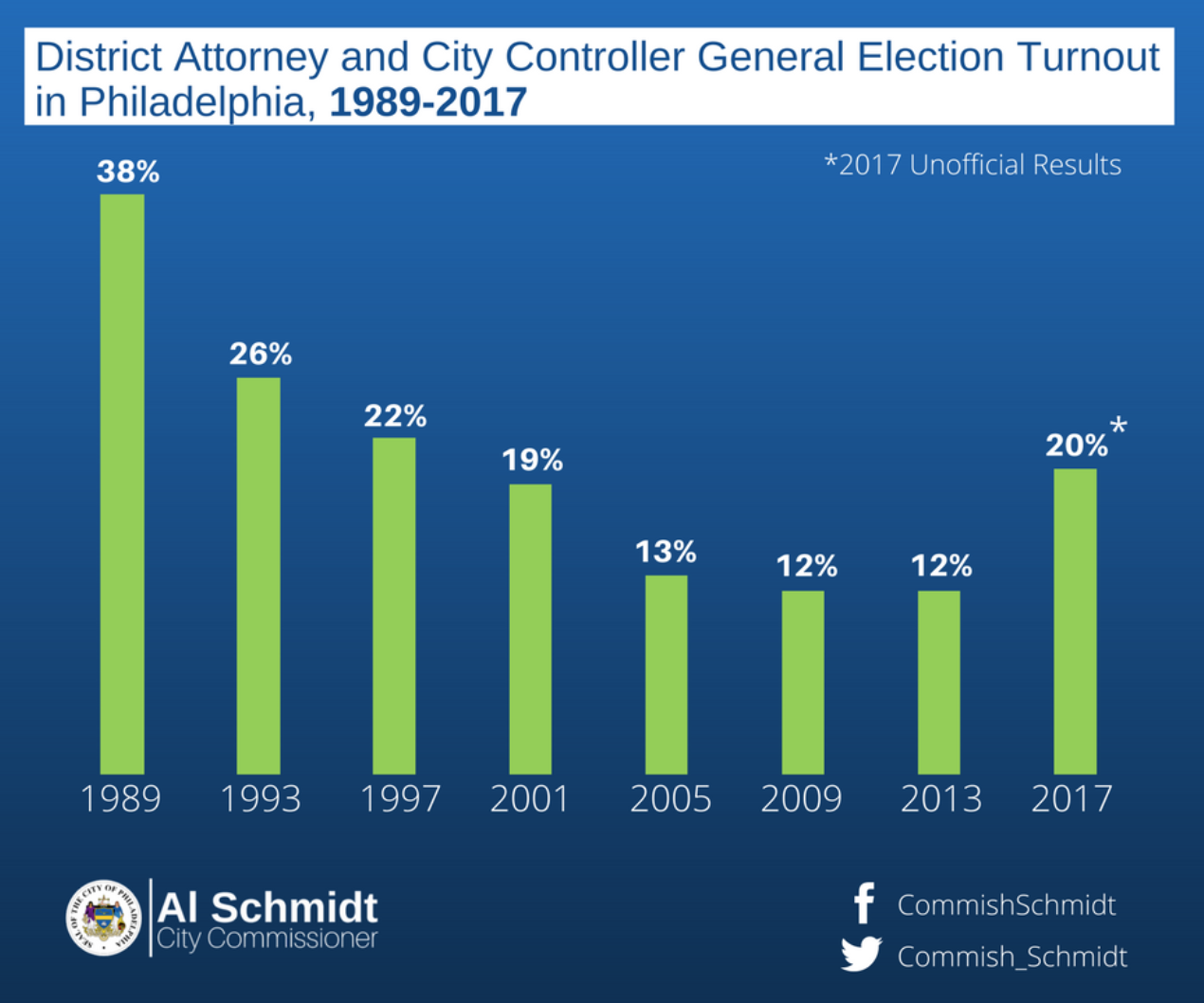 Wards that voted for Rebecca Rhynhart and Larry Krasner turned out at much higher rates than wards that went for Republican Beth Grossman. For Larry Krasner’s top 12 wards by vote count, turnout averaged about 26%—higher than the city average of 20%. For all 12 wards that voted for Beth Grossman, average turnout was just 18.5%, lower than the city average. In Rebecca Rhynhart’s top 12 voting wards, average turnout was 28.22%Commissioner Al Schmidt released some infographics showing the highest turnout wards, and the wards that have improved the most. In all cases, the wards that turned out at the highest rates, and saw the highest rates of growth in voter participation, were in greater Center City, the Riverwards, West Philly, and Northwest Philly. The 9th ward really is just showing off at this point, with 42% turnout. 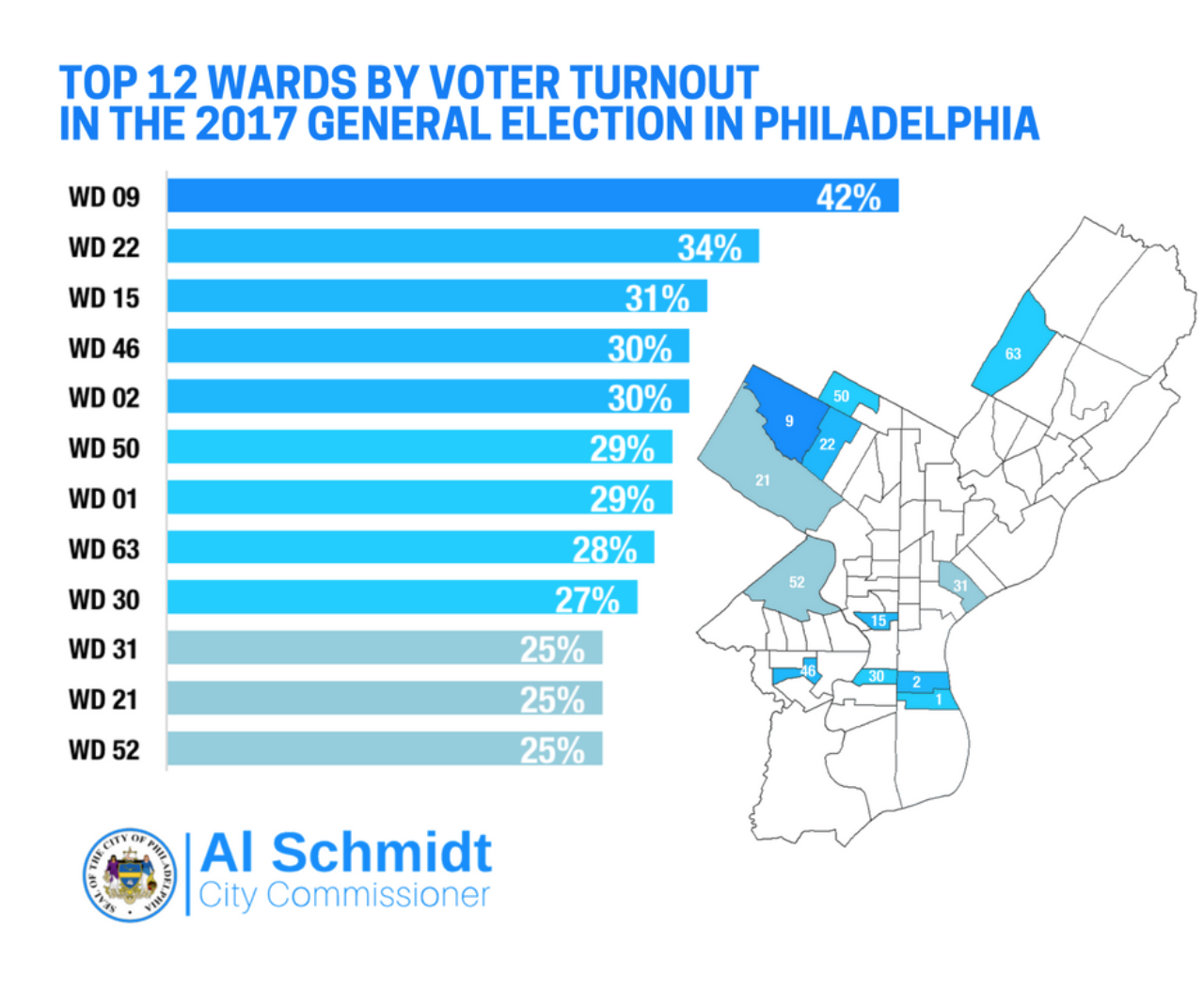 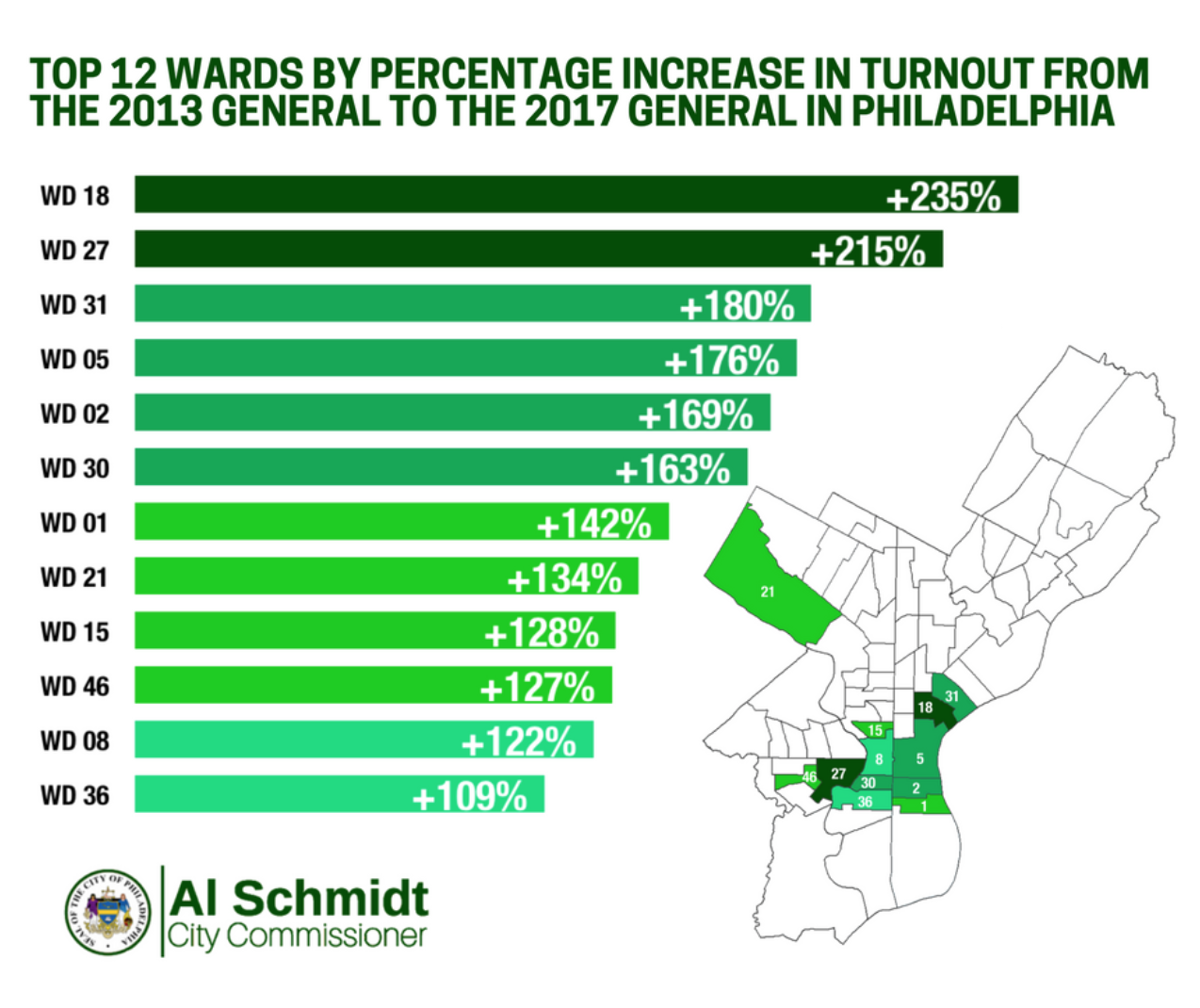 These areas have always been the backbone of Democratic voter turnout in the city, especially for progressive candidates during primary elections, but what’s striking is how much the map has expanded to include everything from deep South Philly to Port Richmond on the east side, far past University City into West Philly along Baltimore Avenue.

Back during the primary, we tried to put some numbers to Bob Brady’s dichotomy between “liberal” and “traditional” wards, based on voting in the District Attorney and Controller primaries.

In the wards where Rebecca Rhynhart outperformed Alan Butkovitz, and Larry Krasner and Joe Khan both outperformed the rest of the field, we saw that the map of “liberal” wards had greatly expanded as a function of higher voter turnout. Looking back at those same wards in the general election, we saw very high turnout once again for a municipal year, and most of the turnout increase was in those same “liberal” wards.In the top 10 wards that voted for Rebecca Rhynhart in the Democratic primary, turnout averaged 28.78% in November, while in the top 10 Butkovitz wards, turnout averaged 18.66% in the general election. Five of the 10 top Butkovitz wards from the primary voted for Beth Grossman for District Attorney in the general.In the top 10 wards where Larry Krasner and Joe Khan performed best in the primary, turnout averaged 18%—lower than the city average—but turnout was worse in the wards that went for other D.A. primary candidates, which averaged just 16.65% turnout. Six of the twelve wards that voted for Beth Grossman in the general election—all concentrated in the Northeast—were also “traditional” wards that we identified in the Democratic primary.

All in all, the 2017 election revealed that the number of "liberal wards" has expanded both in the number of wards, and in terms of voter participation within those wards. This coalition of wards turned out at unusually high rates both in the 2017 primary and now in the general election. Will these voters show up at similar rates or higher in the 2018 primary election next May? Here's hoping the third time's a charm!