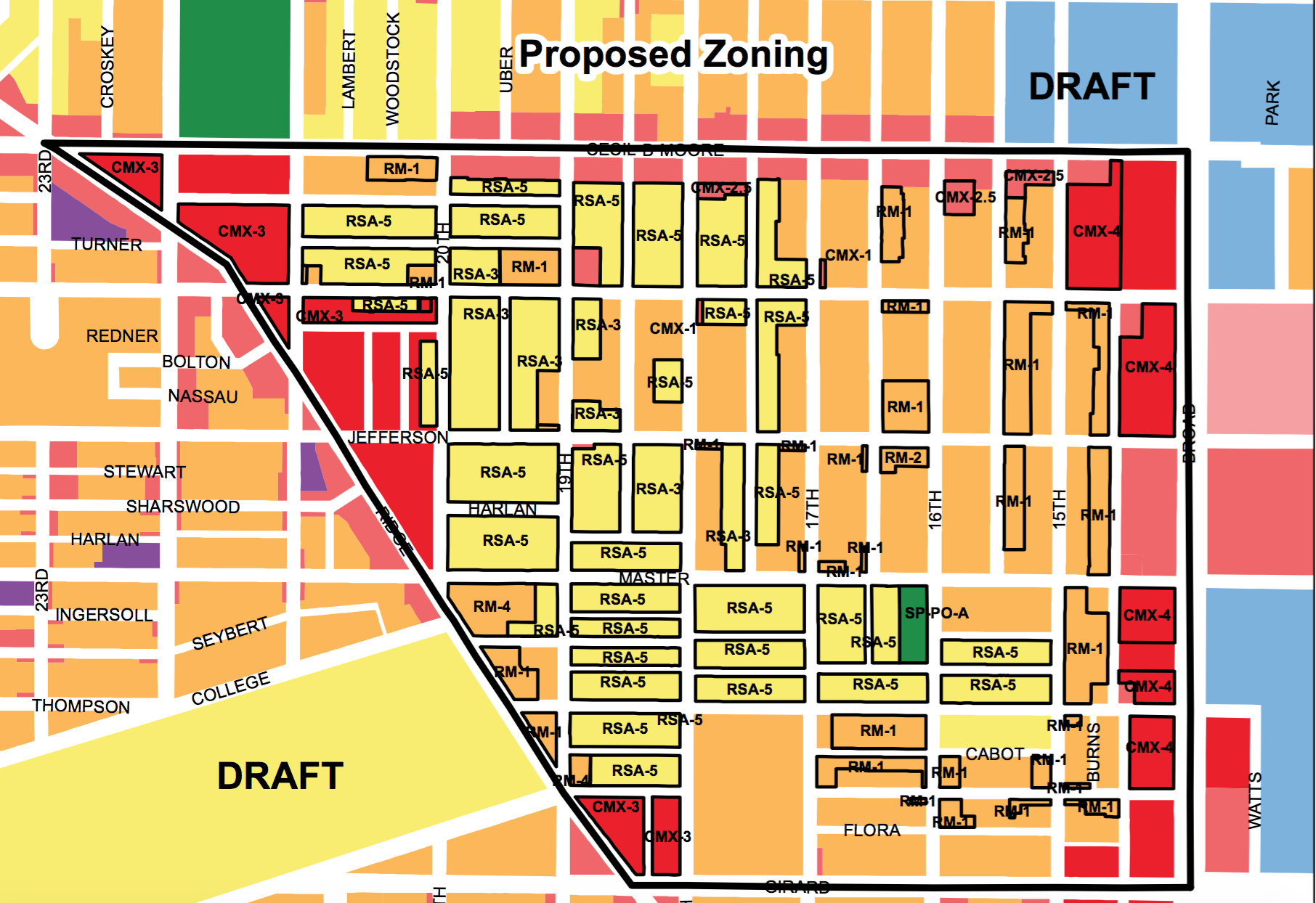 Diana Lind had a thoughtful piece in The Philadelphia Citizen this week about the need to proactively support and preserve independent business on Philly's commercial corridors before a tidal wave of national chain retail makes everything really boring.

Given the giddy reactions on social media to Target's development of urban footprint stores in Center City, and to news of similar moves by companies like Whole Foods, it's clear there's an appetite for this type of shopping experience, and Lind thinks there's a risk of oversaturation.

Some people dislike this trend for snobby reasons, but Lind is coming at this from another angle, warning that we might end up with more of this than we actually want, since it isn't just the pull from consumers that's driving the trend. A big part of it is driven by quirks of mixed-use development finance where lenders push developers to lease their commercial spaces to chain stores that lenders (perhaps not incorrectly) believe will more reliably pay their rent.

Lind suggests an interesting activist financing approach that local venture capitalists could pilot, which would help preserve more independent retail in the mix. Do read the whole thing.

In general, lending practices and federal housing finance rules are an underexplored driver of why cities grow and develop the way they do. For anyone interested in digging further into this, it's worth getting acquainted with some of the work the Obama administration was doing on small-scale mixed-use development finance toward the end of 2016.

To bring this back to local politics, this side point from Lind about zoning is important because it ties in with the city's ongoing zoning remapping work, and the Kenney administration's economic development strategy for neighborhood commercial corridors.

In Philadelphia, we have zoned most of our residential areas to be built at townhouse scale without provision for, or requirement of, retail on corners—despite the fact that up until about 50 years ago, most corners in residential neighborhoods featured stores of some kind or another. Look at the new townhouses going up in former parking lots in Center City, at the abundance of new construction in No Libs and Fishtown. Now try to spot the new retail that’s part of those developments—can you find it? It’s exceedingly rare.

It's not just that corner retail has been zoned out of many neighborhoods, but that even when corners and corridors are zoned for ground-floor retail, the City (and really, City Council) is really stingy with the amount of foot traffic they're willing to provide to those shops.

For neighborhood commercial corridors to thrive, storefront businesses need a lot of foot traffic. And the foot traffic needs to come mostly from people who live nearby, with a smaller portion coming from visitors from outside the neighborhood.

That's where zoning comes into play. While commercial corridors themselves will typically feature a lot of mixed-use zoning (CMX-2, CMX 2.5, or CMX 3, which allow short to mid-rise mixed-use buildings) the blocks immediately next to those corridors are often zoned for single-family residential, instead of multi-family apartment and condo buildings.

Because the Planning Commission doesn't keep a record of net up-zonings or down-zonings as Councilmembers pass rezoning bills, we don't know how widespread this is, but on a number of occasions we've seen Councilmembers down-zone whole sections of neighborhoods from mostly RM-1 (apartments) to mostly RSA-5 (single family), which reduces the number of dwellings allowed on a property by two-thirds.

That deprives the retail businesses in the neighborhood of additional foot traffic that would help them thrive--or even just survive. And it's particularly hard on the kinds of corner storefront businesses Lind wants to see make a comeback in Philly neighborhoods. The Planning Commission has in some cases resisted requests from neighborhood groups (such as the South of South Neighbors Association in Graduate Hospital) to rezone more corners for retail use because the population density doesn't exist to support more stores, so the problem is a lot bigger than just the corner zoning.

In one recent example, Darrell Clarke has proposed down-zoning the blocks immediately next to the Ridge Avenue corridor in Sharswood (Bill 161107) , which the Philadelphia Housing Authority has said they want to become a happening commercial corridor. 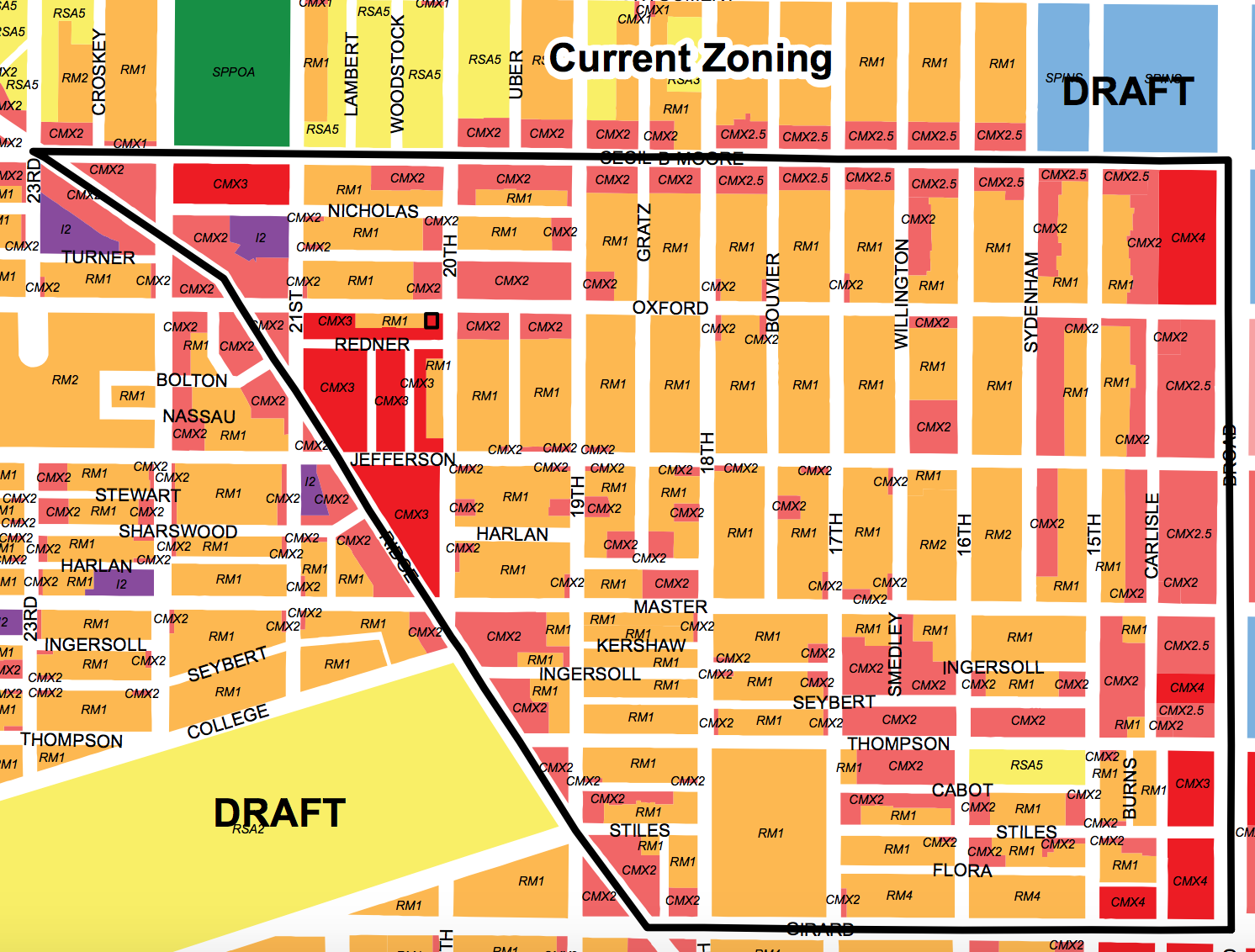 Sandy Smith at Philly Mag recently profiled developer Rahil Raza, whose company Raza Properties is building workforce housing in this area. Raza says the proposed rezoning would harm his ability to provide housing at a price point people in Sharswood can afford, in addition to weakening the commercial corridor on Ridge.

“I don’t think the neighbors want what the councilman is pushing,” he said. “Lots in North Philadelphia are a lot bigger — two to three times bigger than lots in Point Breeze. His agenda is to rezone these lots to RSA-5,” the densest category for single-family rowhomes; most of the lots are now zoned for multifamily structures or commercial mixed-use.

“My purpose is to build for middle-class people, and I can only do that if I’m allowed to have density,” he went on. “If I can get [low-rise multifamily] zoning, I can keep the costs down and build high-quality housing to sell to middle-class individuals. To build single-family houses on that land is not only a waste of land, but the people who build ‘workforce housing’ in the city would waste a lot of money and cut a lot of corners.

Clarke also recently down-zoned the Brewerytown side of Girard Avenue in the same way, ignoring warnings from businesses and corridor groups that excessive single-family zoning right off Girard would undercut their efforts to improve the West Girard commercial corridor.

It's disappointing that zoning strategies for supporting neighborhood retail have been completely left out of the conversation as Jim Kenney has rolled out his commercial corridor initiatives, since population density and foot traffic are key ingredients for healthy neighborhood retail.

To bring it back to the point of Diana Lind's piece, lending practices and e-commerce are working together to subtract a lot of goods-based retail businesses from corridors, or replace independent businesses with chains. That makes it more important to double down on the types of businesses that can't be swallowed up by e-commerce--local services like grocery and convenience stores, restaurants and bars, barbers and hair salons, dry cleaners, doctor and dentist offices, florists, gyms, and so on.

As Philadelphia continues its transition to a modern service economy, more residents will make a living providing these kinds of services, and the thing they all need most is proximity to people. There's sometimes confusion among elected officials and voters about why city planners are so favorable to dense urban development, but this is the reason.

This doesn't mean you need forests of skyscrapers to support a variety of neighborhood services. But you do need some multi-family apartments and mid-rise buildings in the mix, and if the Kenney administration really cares about setting up corridor businesses for success, at some point they're going need to spend some political capital providing a counterweight to City Councilmembers' tendency to support excessive single-family zoning.