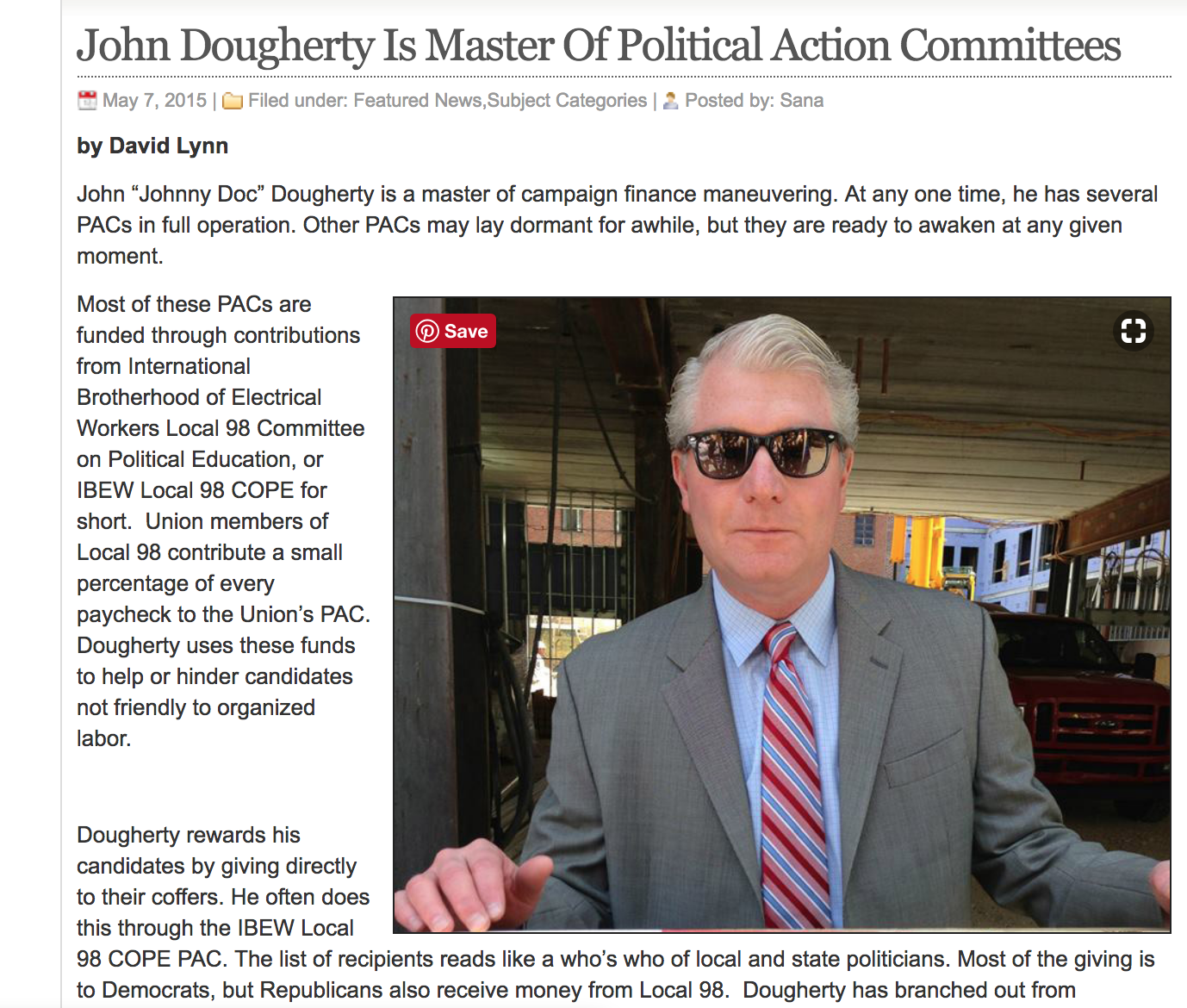 (John Dougherty in the Public Record)

This week's news that South Jersey power broker George Norcross had his phone tapped by the feds as part of the investigation into IBEW Local 98 is a timely reminder that this investigation may have gone quiet, but it hasn't gone away, and at any point could spring back into the news to shake up next year's local elections.

"[D]ocuments reviewed by the Inquirer and Daily News show that the 2016 wiretaps on Norcross' cell and work phones weren't tied to the New Jersey probe, but to a separate one on the other side of the Delaware River:the long-running investigation of Philadelphia labor leader John "Johnny Doc" Dougherty.

The documents — court filings related to the confidential wiretapping two years ago of both men's phones — were signed by the same prosecutor, authorized by the same judge, and bear identical case numbers.

What drew investigators' attention to Norcross remains unclear. But the records indicate for the first time a connection between the FBI's interest into perhaps the preeminent nonelected figure in Democratic politics in Pennsylvania and the man who holds the same kind of clout in New Jersey."

Recall that Norcross's political operation is most visibly connected to Dougherty through the Super PAC "Building a Better Pa." that was created to support Jim Kenney's Mayoral primary campaign, and that Jim Kenney's very first post-election meeting was with Norcross.

The scope of the FBI's investigation into Local 98 is apparently very broad, and depending on the outcome, could have major ramifications for affiliated politicians, as the Inquirer explained.

"And yet everything Dougherty has built could come crashing down, depending on the outcome of an FBI investigation of the electricians union and its leader.

Court filings indicate that authorities are interested in everything from Local 98's prolific political giving and the network it has built across all levels of government to allegations of work-site intimidation and the misspending of funds meant to foster union jobs. As recently as February [2018], a federal grand jury was hearing witness testimony in the probe, according to sources.

Indictments could imperil Dougherty's allies, sap the mayor's political capital, and reshape organized labor in one of the last remaining cities in the country where unions are a powerful force. They could take out one of the last old-school political bosses in America — a person who some call the most powerful man in Philadelphia."

In recent years, politicians being investigated by the FBI have all followed a very familiar pattern of resigning in a timeframe convenient to create the conditions for an open primary to replace them. Bob Brady, Chaka Fattah, and Seth Williams all fit the pattern, and it seems like it's no coincidence. Try to imagine any of these men voluntarily giving up the right to hand-pick their replacements, with no outside coercion—it's unthinkable.

So with the first Mayoral and Council election cycle coming up since the investigation first began post-2015, it will be interesting to see if the FBI decides that anyone they're currently investigating should also resign with time to spare for an open primary, or if the feds will make any moves to weaken the influence of Pennsylvania's largest political giver ahead of an election cycle where he'll otherwise have an opening to strengthen his influence on City Council for another 4 years.