Southeast PA and Allegheny Officials Call for an All-Mail Election 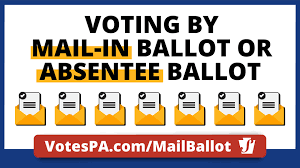 Local elected officials from some of Pennsylvania’s most populous counties are urging the state to consider an all-mail primary election on June 2nd.

Officials from Montgomery and Chester wrote letters calling on the state to move the election to the mail, with some limited in-person voting opportunities available, and Delaware County sent a letter warning Wolf that they may not be able to use their new voting machines. And in western PA, Allegheny County Executive Rich Fitzgerald also released a statement calling for an all-mail election.

So far, Pennsylvania state lawmakers are only marketing the existence of the vote-by-mail program, which will have its first-ever test run in this primary, but they aren’t following some other states in actually mailing all registered voters a mail-in ballot or a ballot application. That could lead to more counties taking matters into their own hands. In a potentially consequential move Thursday, Allegheny Council member Bethany Hallam introduced a bill with Fitzgerald’s support that would send all voters in the county a mail-in ballot. That could trigger a domino effect if it passes.

We’ve called on PA lawmakers to pass Rep. Kevin Boyle’s bill, HB 2637, which would send every voter a mail-in ballot application, and is currently stalled in the State Government Committee. The proposals from the county officials for an all-mail election would have the state go even further than HB 2637, and would require more state legislation and funding. Governor Wolf told the AP’s Marc Levy that he was currently evaluating options to increase mail voting but did not commit support for anything specific.

Much of the debate over vote-by-mail has centered on the partisan implications of such a move for the November election, and whether it would advantage Democrats or Republicans more. President Donald Trump made clear why he opposes it last week, positing that vote-by-mail would mean no Republicans would ever be elected again. But there’s actually little evidence to suggest a lopsided benefit for either party.

A very timely study published this week found vote-by-mail does not disproportionately help either Democrats or Republicans, and can cause a small increase in voter participation among all groups. Researchers at Stanford’s Democracy and Polarization Lab found that:

Researchers looked at three of the states with substantial vote-by-mail programs where counties rolled out the program in staggered fashion. This allowed them to measure differences between those counties using the program and those without it. The findings from the VBM counties ranged from a 1.1% decrease in Democratic vote share to a 2.5% increase, and a similarly negligible impact on Democratic turnout share, with a modest overall turnout increase of about 2% on average.

A separate study did find VBM has increased voter turnout in municipal elections in Washington state by between 3.6% and 4.3%, and also increased some measures of political accountability for local elected officials.

Circumstances under COVID-19 could mean even higher vote-by-mail participation, both due to the greater ease of voting, and also the heightened concern and attention to the 2020 elections, as documented by polling firm TargetSmart. Two Wisconsin counties that opted to send absentee ballots to all county voters this week saw voter participation that was double the statewide average.

For more updates on Pennsylvania's vote-by-mail rollout and other the 2020 election news, sign up for Philadelphia 3.0's weekly newsletter.