The High Cost of a Disengaged Mayor 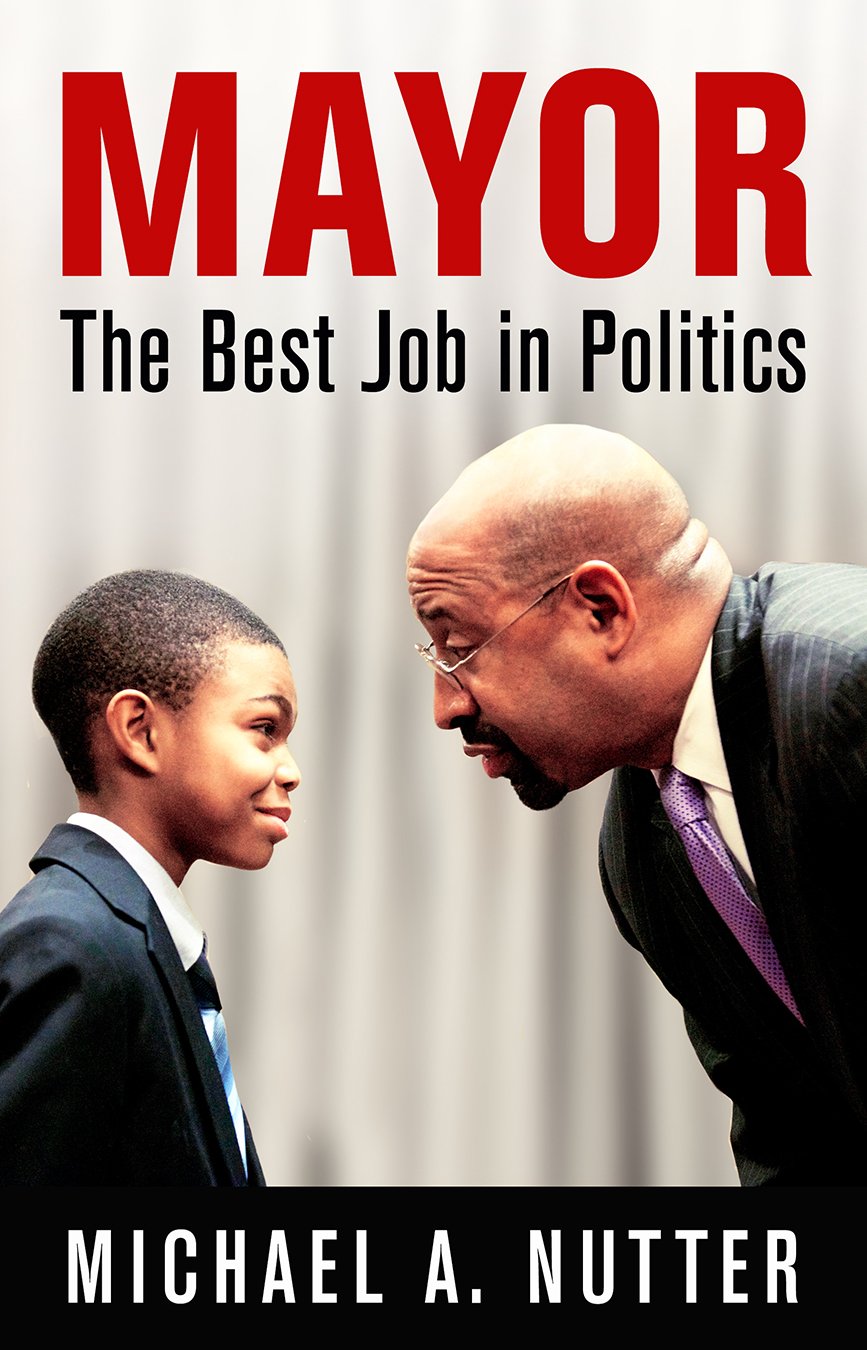 (Book cover of Mayor: The Best Job in Politics, by Michael Nutter)

Former Mayor Michael Nutter is out with a new op-ed his week making a plea to 2023 voters to consider the leadership qualities of the individuals who may be seeking the office next year, with suggestions for ten traits voters should be looking for.

Mayor Nutter sticks mainly to aspirational and positive themes in the piece, though toward the end we get a glimpse of what was probably his real motivation for writing: current Mayor Jim Kenney's visible distaste for the job and the general rudderless state of affairs at City Hall.

"As the candidates begin to announce their intention to run for mayor over the next several months, I want my fellow Philadelphians to ask themselves: Does this person who is seeking this position have the capacity, the capability, the IQ and EQ, and any past experience that demonstrates that they can actually do this job?

We’ve seen what a lack of the traits that I mention can lead to — lackluster leadership dreading another day of public service, and a city that seems to be languishing in a sea of confusion and controversy, operating almost on autopilot with seemingly no real plans of action.

We deserve better, Philadelphia, and next year is your chance to have your voice heard. Let’s elect a leader who can govern."

It's easy to see why the person who wrote a book called "Mayor: The Best Job in Politics" would take some personal offense at what's transpired lately.

Some ill-considered comments from Mayor Jim Kenney after the gun-related panic on the Parkway at the July 4th fireworks celebration a few weeks ago had led to calls from some on City Council and other corners for the Mayor to resign early.

Mayor Kenney has since apologized for the remarks, which he made shortly after the incident, where he appeared to focus more on his own plight as the city’s top executive than on the substance of the situation at hand. Asked by a reporter if he was looking forward to not being the Mayor, Kenney answered in the affirmative, offering critics (and 2023 Mayoral hopefuls) a big opening to talk about the Mayor’s lackadaisical leadership style, memorably described by State Rep. Malcolm Kenyatta as a “Ben Simmons attitude." 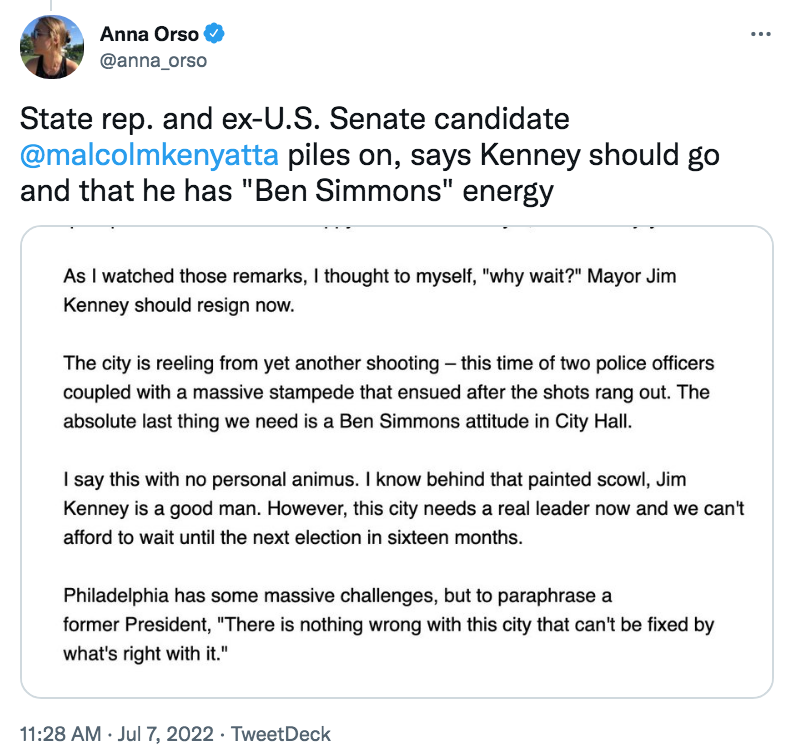 With an essentially blank public schedule week-in and week-out, and a constant dour expression whenever he is publicly photographed, it has been clear for some time that Mayor Kenney does not enjoy being the Mayor. That in and of itself isn’t necessarily a problem worthy of resignation, though his steadfast refusal to put on for the city even when presiding over positive news, or representing Philadelphia to the outside world is always a big downer.

It’s one thing to be visibly tired of the job, but another thing to withdraw from doing the job in some key areas that have material impacts on residents’ lives, and that’s where the argument for an early resignation is stronger. In addition to the Mayor’s usual role as the biggest public booster of the city, the Mayor is also the chief executive of the city bureaucracy and it is on that front where there is a clearer case to be made that a disengaged Mayor Kenney is doing real damage.

At this point in Mayor Kenney’s second term, across multiple areas of city government it has become very clear that any issue that would require the Mayor to pick a fight with City Council or a Department head, or take a hard stance on a controversial topic, is simply not going to move forward.

The latest example of this dynamic was the recent final decision by the Kenney administration to all but abandon their safety goals for Washington Avenue repaving, and defer completely to Councilmember Kenyatta Johnson in restriping the street exactly as-is from 11th St to Grays Ferry, with none of the planned safety improvements. The Kenney administration had much more powerful legal authority to carry out their plan than they let on publicly, but this became a moot point because Jim Kenney the individual personally had no interest in playing chicken with Johnson so he gave up instead.

Important high-stakes policy fights like this have been happening all across the various issue spaces that the Mayor is either indifferent to, or where he has been ignoring or even tacitly endorsing City Council moves to strip the institution of the Mayor’s Office of key powers. Also, while a Mayor could also go overboard micromanaging departments in an unhelpful way, the opposite problem seems to be occurring now where the Mayor has given up on trying to govern the departments at all, leaving individual bureaucrats to govern themselves outside the context of any larger holistic political aims the Mayor may have.

The Mayor never once commented publicly on the Washington Avenue issue even after it drew national media attention, and he left the transportation office to make all the important strategic calls and take the public heat for them.

Similar dynamics came into play with the COVID public health response, with sometimes embarrassing consequences like when the Health Department announced the reimposition of the indoor mask mandate, only to immediately withdraw it a few days later. It’s been clear that the Health Department has been left on its own to decide a lot of larger city economic policy questions that really should be decided more holistically at a higher level by the Mayor—if we had a Mayor who wanted to engage.

This became an issue too with the Streets Department where, especially during the height of the pandemic situation, city trash collection went totally off the rails, and there was no interest from the Mayor in making any changes to operations that didn’t have the support of Streets Commissioner Carlton Williams, even as this became a massive political liability for Mayor Kenney. Streets staff and sanitation workers like Terrill Haigler (aka Ya Fav Trashman) brought constructive ideas to Streets leadership but had little success in changing their approach, in part because the Mayor was unwilling to ruffle any feathers with department managers.

Distressingly, there has also been an ongoing and very focused reactionary effort by Council President Darrell Clarke to strip the office of the Mayor of certain powers over housing and zoning matters, and give those powers to City Council District members instead. This power struggle has not been joined in any meaningful way by the Mayor or his team from the opposing side, and CP Clarke has been left to carry out this agenda mostly undisturbed. This may be the worst consequence of having a disinterested Mayor, since it isn’t just that Mayor Kenney himself won’t be able to exercise certain powers, but that the next occupants of the office won’t be able to either.

If Mayor Kenney were to resign before his term ends, the city charter places Council President, Darrell Clarke next in line for the job. Billy Penn has a helpful piece gaming out what would happen next in that scenario. If CP Clarke did not want the job, the next person in line would be City Council’s Finance Committee chair, which is Councilmember Derek Green. Former District Attorney Seth Williams posted on Twitter back on July 5th that he spoke with a person in-the-know in City Council who claimed the Council President would indeed finish out the rest of the term, were Kenney to resign.

Admittedly, the prospect of CP Clarke as Mayor doesn’t sit very well with us, and there are very good reasons for people of our general political persuasion to be concerned by the prospect. But while there are many things that a Mayor Clarke certainly could do to put his stamp on the government in that time, a 1.5-year term would also be very limiting even for someone with a very clear vision and facility with bureaucratic maneuvering. It would be interesting to see whether a brief stint as Mayor would persuade Clarke to run for the full term. It’s actually possible for Clarke to run for 2 terms after the caretaker term, and serve for almost 10 total years as Mayor from start to finish in this scenario, if that is what he wanted to do and the voters supported him.

But there is also a fair amount to like for Clarke skeptics out of the resignation scenario. For one thing, CP Clarke would have to resign as Council President, where, arguably, he currently wields even more power than the Mayor on many of the biggest issues confronting municipal government, with about half the media scrutiny. This is a much better position for someone with CP Clarke’s operating style, and it seems plausible that becoming the Mayor could actually decrease his output on behalf of his policy agenda. It’s unclear who might become Council President next—so far only Curtis Jones Jr. and Cindy Bass have allegedly been lobbying their colleagues about it—but there is a good argument to be made for the anybody-but-Clarke perspective if the goal is decreasing his policy output, even if it means promoting him to the Mayor’s office for a short window.

If CP Clarke did want to run for the full Mayoral term after that, he would still be competing in a crowded field of candidates, most of whom don’t seem very likely to withdraw their bids even if Clarke were to get in the race. How likely is it that CP Clarke would prevail in a crowded field like that?

It’s a gamble that’s probably worth taking since, for what it’s worth, many seasoned Clarke-watchers in town don’t seem to think Clarke would want to run for a full term, and that the main practical upshot of the caretaker-Mayor term would be to cut short his run as Council President. The next Mayor coming into office in 2024 would be able to appoint all of their people to the various boards and commissions, most of whom serve at the pleasure of the Mayor, and there would be no requirement for the next occupant of Room 215 to keep anybody on who Mayor Clarke appointed for the caretaker term. Anything excessively negative that was done could be undone relatively quickly.

The bigger problem at hand is Mayor Kenney’s disconnection from day-to-day governing, and his indifference to the important work of defending the institutional prerogatives of the Mayor’s Office, and it’s a problem that city residents can’t wait until January 2024 to resolve. Whatever else may be said about Council President Clarke or Councilmember Green from a political standpoint, it seems clear they would both bring their A-game to this opportunity. Mayor Kenney should seriously consider whether he is willing to put in the necessary work to complete his term in a satisfactory way, and if not, pass the torch to somebody who will take the job more seriously for the last year and a half.