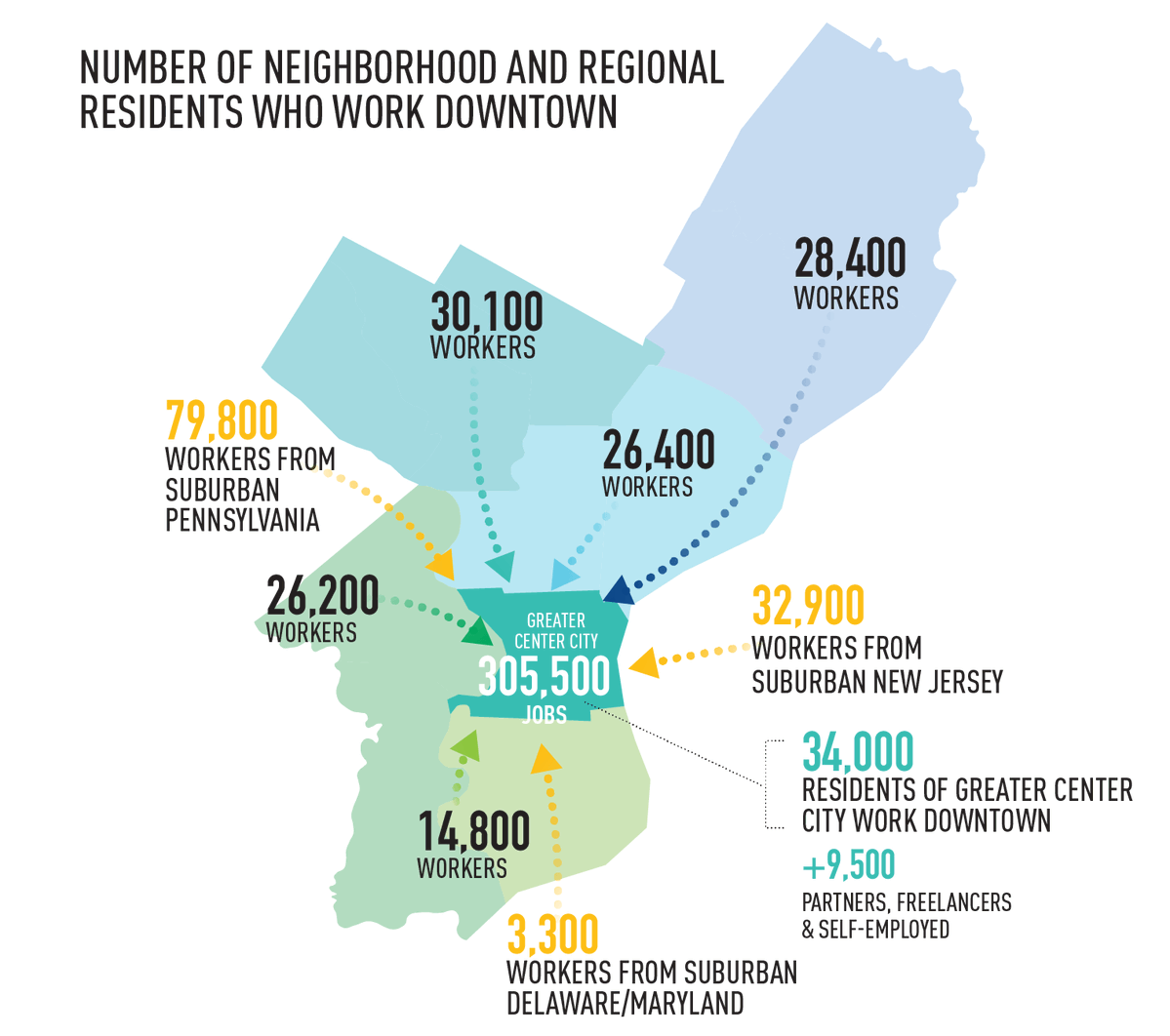 Center City District's new State of Center City report is full of great statistics about the amazing growth of Philadelphia's downtown business district, as well as some of the underlying weaknesses we still face in competing with other big cities, and our nearby suburban municipalities for jobs, residents, and tax base.

At a time when some want to tell a counterproductive political story where prosperity for Center City is supposedly pitted against prosperity for "the neighborhoods" in a zero-sum contest, this section of the report is worth highlighting because it shows how the whole thing is just one big closed loop with Center City and University City hosting about 40% of the jobs of people living in Greater Center City (between Girard and Tasker, and University City), and about 25% of the jobs for people living outside that area. It's the one place in the city that's delivering anything close to broad-based prosperity and the effects are felt across a much broader geography.

Center City is a prime driver of Philadelphia’s economy, holding 42% of city jobs. Diversification is downtown’s defining strength. Professional, business and financial services, real estate and information – prime office-using industries – provide 121,300, (40%) of downtown jobs. Education and health services, the largest sector citywide, is second largest downtown, accounting for 20% of jobs. Entertainment, leisure, hospitality, restaurants and retail hold a 16% share, while federal, state and local government employment provides 12%. Together, these total 305,500 wage and salaried positions with approximately 9,500 more individuals compensated as partners, self-employed, or working freelance. Located at the center of the region’s transit and highway network, 47.5% of downtown’s jobs are held by commuters from outside the city; 52.5% by Philadelphians. The city residents' share has steadily expanded as downtown’s population has grown. Just to the west, equally accessible by transit, University City holds another 11% of city jobs, with 80% in education and health services.

In Greater Center City, 40% of residents work downtown; another 11% commute to University City; 62% get to work without a car; 38% in the core walk to work. In neighborhoods outside Center City, 25% of workers travel to jobs downtown; another 5% work in University City. In every neighborhood outside Center City, more people work downtown than in the area in which they live. While 37% of Center City jobs require at least a bachelor’s degree, the broad range of other opportunities provided by downtown employers combined with strong transit connectivity, makes 30% of jobs available to those with associate degrees, while another 33% require no more than a high school diploma.

These numbers could always be better, of course; Center City could hold a greater share of the region's jobs so that fewer residents need to commute to the suburbs for work every day; Greater Center City could be rezoned to allow denser housing options outside of a very stingy radius only in the core downtown, enabling even more people to afford to live closer to the city's largest job center; public transit and on-street biking conditions could all be improved to make it faster and more convenient to get to downtown jobs for people who can't afford to, or just don't want to live in Greater Center City.

But on the whole, Center City is an example of what's going right with Philadelphia's economy. Even as poverty is unacceptably high and opportunities are too scarce for people with lower educational attainment, this is the area of the city with the most such opportunities, and any path forward involves doing more of what's already working there—either by adding more jobs into the existing agglomeration, or by doing what's within municipal and state government's power to cultivate the key features of Center City's built environment in miniature on neighborhood commercial corridors throughout the city—clean, dense, walkable, mixed commercial and residential places with good access to high-quality transit.