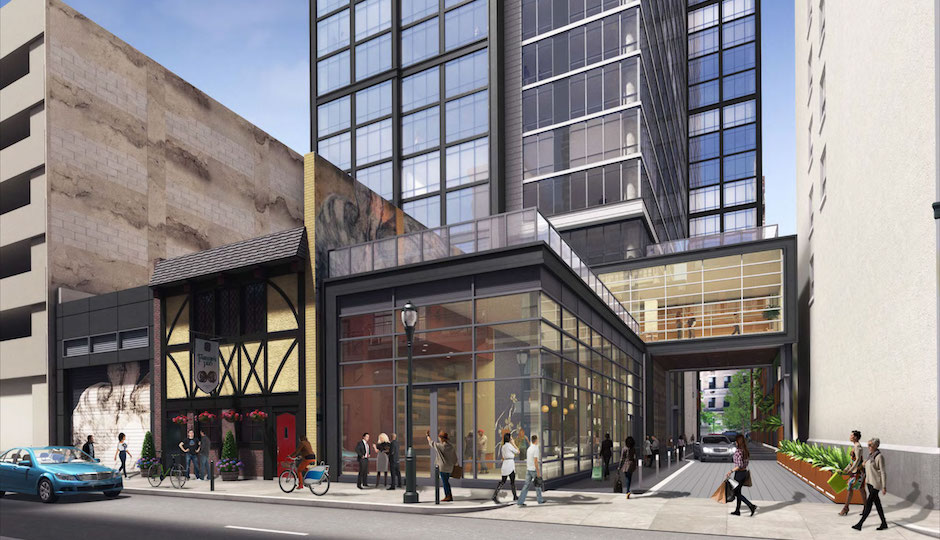 At the end of last year, Councilmember Maria Quinones-Sanchez recently introduced a bill that would bring to life a version of an idea that has been kicking around in local urbanist advocacy circles for a few years now: the Permit Parking Blacklist.

The proposal is meant to solve a political challenge that will be familiar to anybody who’s attended a neighborhood zoning meeting about a multi-family building. If the proposal doesn’t include one-for-one (1:1) parking with an off-street spot for each home, then people will complain about the possibility of new residents parking their cars on the street.

Those of us who’d prefer to see some more affordable housing options and fewer cars on the road are more likely to say it’s fine to build some homes for people who don’t need parking. Based on the latest Census info, about 43% of the city commutes without a car, and that number is often much larger in many of the more central walkable neighborhoods.

Others respond that there’s no way of knowing whether the new residents really won’t have cars, and also there’s nothing stopping them from parking on the street and competing with existing cars for scarce spaces.

The idea here is simple: by blacklisting certain addresses from being eligible for residential parking permits, neighbors can effectively ensure that new residents of an apartment building won’t park on the street overnight, because they won’t be eligible for the permits needed to do so. The only catch is that your block does have to adopt permit parking to make it work.

This is a very pragmatic, if somewhat repugnant, demand management solution to the endless curb parking wars in Philly’s rowhouse neighborhoods, which is arguably better than every other alternative even if it doesn’t totally sit well for good reasons.

Supply-Side Responses to Parking are a Dead End

Philadelphia’s zoning code sensibly doesn’t require on-site parking in many cases, for rowhomes or small apartment buildings, and for the main types of commercial corridor buildings. That means people can buy or rent just a house without being required by the city government to also rent a parking space at the same time. This is an important and hard-won principle from the 2012 Zoning Code Commission, and it’s worth defending and going even further in this direction.

There are still some cases where the code requires on-site parking, particularly for mid-rise apartment buildings, where home builders are required by law to provide a minimum of 3 parking spaces for every 10 homes. More and more environmentally progressive cities across the country, like San Francisco, Minneapolis, and Buffalo are erasing these parking requirements completely, recognizing that these laws drive up housing costs by a non-trivial amount, put more cars on the road, and generally act like a fertility drug for car-dependence.

For a hundred different reasons, it would be smart for Philadelphia city leaders to follow the lead of the other places doing this because, like it or not, if you believe the climate-ready Philadelphia of the not-too-distant future should feature less driving than today, then getting the government’s thumb off of the scale in favor of more parking is the bare minimum of what we have to do to achieve that outcome.

Permit Blacklists: A Way to Keep the Promise of Car-Free Tenants

Those of us who want to see more affordability and housing choice tend to be voices for allowing low-parking multi-family housing to be permitted, since over 40% of city residents don’t commute by car, and home builders should be allowed to build homes for them too.

The pushback to this idea is typically that supporters may say the tenants of such a building will be non-drivers, or they may wish that were the case, but in reality there’s nothing stopping new tenants from bringing a car and parking it on the street like everybody else, contributing to a tighter curb parking situation.

While everybody in the city has equal ownership to the public land on the street, a lot of people still feel a sense of weak ownership—rightly or wrongly—over the parking spaces in front of their homes or on their block, and anything that dilutes that ownership value is going to create some controversy. The housing-choice side can argue until they’re blue in the face about car-free housing attracting car-free tenants, but without an ironclad way to make it so, there’s no convincing the skeptics.

What the housing-choice side has wanted for years is a way of guaranteeing that people moving into car-free housing won’t use curb parking, and the best idea yet devised for accomplishing this is a Permit Parking Blacklist.

The basic idea is that if a new building doesn’t feature any on-site parking, it can be placed on a  list maintained by the Philadelphia Parking Authority where residents living at that address will be ineligible for residential parking permits.

Meanwhile, the block in question can adopt residential permit parking with full assurance that if anybody living in the new no-parking building does have a car, they won’t be able to park on that block for longer than the 2 or 3 hour time limit—and critically, not overnight when the real parking crunch happens.

This has always been an interesting and fun-to-debate idea, but it had never risen above the conceptual level until this year when Councilmember Maria Quinones-Sanchez introduced a bill (200711) for an area of Kensington officially establishing a permit parking blacklist system.

Councilmember Sanchez’s bill (200711) takes a somewhat different tack from what advocates of this policy have had in mind, in that it would prohibit residents who do have on-site parking in multifamily buildings from also obtaining residential parking permits to park on the street.

This a good idea for ensuring that people don’t park second or third cars on the street and that they actually use their garage space for car storage, rather than storing other belongings, as is often the case with people’s garages. While that’s not in tension exactly with the goal of blacklisting car-free buildings, it’s a good measure less aggressive, and it’s possible it could create an unfortunate incentive for developers to include more on-site parking than required. This all deserves more discussion before passage, but conceptually it’s a really important step forward for creating this system at the Parking Authority.

Sanchez Would Open the Door to Neighborhood-Based Permit Prices

In a separate bill (200712), Councilmember Sanchez would also waive the residential permit parking fee on the first vehicle for low-income residents in the proposed District 38 parking district (200710), which covers parts of Kensington.

That’s a smart approach and should help reduce some of the inevitable resistance to managing parking demand. In the same vein, City Council should also reconsider whether it makes sense to charge the same rate for parking permits in Norris Square as in Rittenhouse Square, where the square footage land values are much higher and the curb parking demand is much greater.

Anything that could work to solve the problems we need parking management to solve is bound to have some iffy features, at least from someone’s perspective. The only way to be successful is to decide what problems are most important to solve, and what type of ickiness we can best live with. The idea of formally treating newcomers differently from the people already there as a matter of policy is gross. The idea of granting a quasi-property right to public land for private vehicle storage is pretty gross too. But is either one of these things as bad as turning down more badly-needed rental housing on the basis of parking mania? We would say no.

What this discussion does reveal is that this kind of building-by-building, block-by-block approach to what is arguably one of the city’s top transportation issues, is inadequate to the task at hand and is no way to run a city, and City Council needs to begin working at the true scale of the problem.

The PPA’s block-by-block signature-gathering requirement to opt a block into permit parking—as opposed to a system where City Council creates neighborhood-wide permit zones—is classic politician blame-avoidance in action. It’s a way of shielding elected officials from making unpopular but necessary decisions by instead making everyday residents burn their own social capital with their neighbors to fix the problem.

Luckily, the Permit Parking Blacklist bill and the neighborhood-based pricing ideas finally getting on the agenda in City Council is a sign that at least one Councilmember, Maria Quinones-Sanchez, is ready for a serious conversation about real solutions.