A Court of Common Pleas decision throwing out the City's methodology for assessing land under condo buildings could potentially open the door to a new way of assessing land citywide if the decision withstands City appeals.

Natalie Kostelni reports on the outcome of 1706 Rittenhouse Square assessment appeal case, where Judge Idee Fox threw out the Office of Property Assessment's odd practice of backing land value out of improvement value for individual condos.

While commercial property owners came out ahead in the one case, owners of condos — whether they cost more than $1 million or less — were the winners in the other ruling. That case focused on condominiums and the city increasing the land portion of the assessment. The new assessments of the land were frequently made on properties built using the 10-year tax abatement.

"The result was a huge increase and land values that were preposterous," said Phil Korb, a lawyer with Ballard Spahr who represented the owner of a condo at 1706 Rittenhouse Square. "It was wrong and didn't make sense under condominium law."

The owner of that condo at 1706 Rittenhouse served as the representative case for 282 other appeals filed by condo owners throughout the city. An agreement was made in which however the court ruled on that case would apply to the other appeals.

The city was assessing condos as if each unit in a single building had different land values, even though each condo owner controls an equal fraction of the underlying ground upon which the building was constructed. The value of land doesn't change if a fraction is owned or all of it is owned by an individual or entity. The court determined the city's method of assessing land was wrong. The result will be a dramatic decrease in the tax assessment on the land.

When the Office of Property Assessment assesses properties, they assign a value for improvements and a value for land. In the real world, land values are derived mostly from the overall location, so they should be roughly the same value per square foot for properties on the same block or section of the neighborhood.

And for a few years after the Actual Value Initiative was passed, the City tried to value land independently of improvements to capture the locational value separately. But in subsequent reassessments, OPA opted for the much less logical practice of deriving land value as a function of improvement value, and Controller Rebecca Rhynhart's analysis found that this made land assessments less accurate. It's led to some pretty absurd land valuations, where new buildings on a block have drastically higher underlying land assessments on a square foot basis than older buildings directly next door. 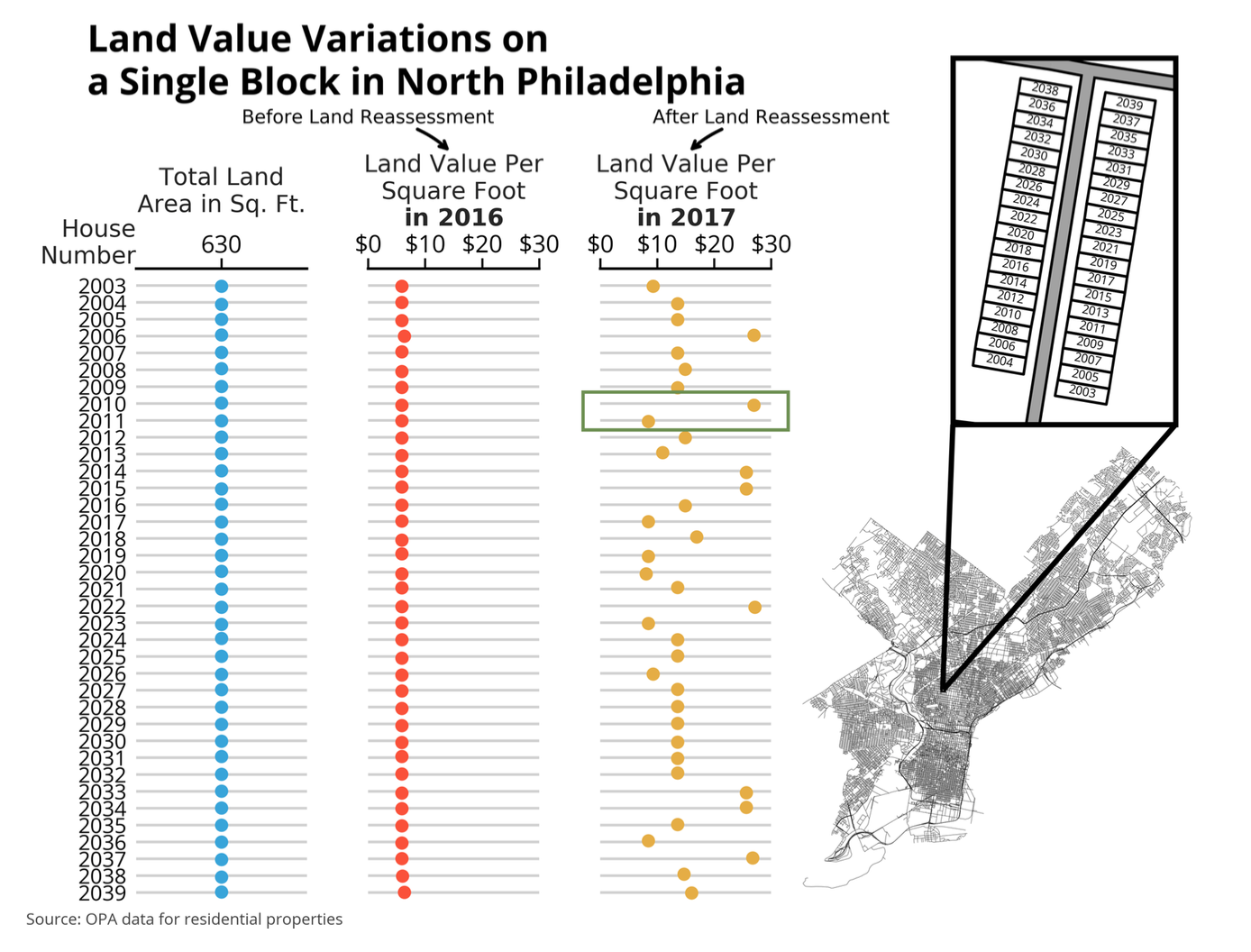 Extending OPA's nonsensical methodology to condo buildings really heightens the absurdity, where they've been backing land value out of the value of each individual unit in a big multi-family building. Since all the units are stacked on top of a single land parcel, all of the units should be splitting the assessed value of that single parcel roughly equally—or at least in proportion to the non-improvement benefits they receive.

A penthouse unit, for example, should really have a somewhat higher land assessment than a unit on the second floor of a big multifamily building since the views from the higher floors are more like a locational value than an "improvement" value. How exactly that gets built into the methodology is something best left to the experts to figure out, but this goes back to the main point that we need a more sophisticated way of assessing locational value independently of the value of structures, since that is exactly where a lot of real estate value is getting left on the table in these reassessments.

The low-slung structures and vacant lots that still exist in prime locations are being drastically undertaxed in many cases, and that means higher taxes for everybody else. Meanwhile, the currently land assessment methodology has been penalizing people for using land efficiently who really should be seeing a density discount on property taxes for splitting the cost of valuable central land parcels across dozens or even hundreds of households. From an urban planning and environmental standpoint, that's exactly what we should want to see, and our property tax system should reward those choices rather than punish them.

The fact that the plaintiffs made a successful Uniformity Clause argument in this case may be the most interesting development here, particularly since Judge Fox set a precedent for this to apply to all condo buildings. Individual homeowners have successfully challenged land assessments in the past based on Uniformity, but it's so far failed to get any kind of precedent established the way the 1706 Rittenhouse decision did. Because of this ruling, the City will now have to come up with a methodology they can live with for assessing land independently for condo properties.

Once that's established, could groups of homeowners or commercial property owners jointly sue the City over non-uniform land assessments to get them to throw out the flawed "residual land" methodology for those classes of property too? Once a more accurate land assessment approach exists, the drumbeat to begin independently assessing land in all other cases will start to get a lot louder.