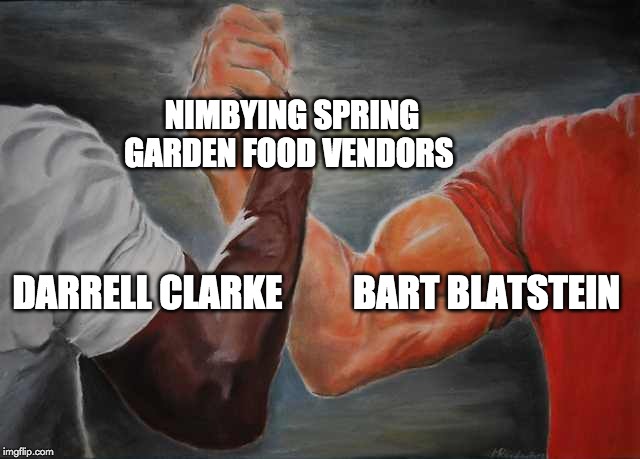 City Council members love to signal that they care about small businesses and improving the business climate for new businesses in the city, but there are few better indicators of what their true priorities are than how they vote on mobile vending issues.

In the food and beverage industry, food trucks and food carts are often a cheaper way for people with a business idea to start out on their own for the first time, as the overhead is lower than it would be for starting a traditional brick-and-mortar storefront restaurant. It costs less capital to start it up, and it's a way to test out a concept to see if there's enough interest before making a more substantial commitment.

If we're interested in promoting more entrepreneurship and new business formation, at least in the food business, making mobile vending easier is one of the very best things we can do.

Unfortunately for food truck and cart vendors though, there's always political pressure coming from many different directions—incumbent restaurant owners and their professional associations, NIMBY neighbors, and others—to more strictly limit how and where they can operate, and this is where many of the local politicians who are for entrepreneurship, in theory, can start looking like big hypocrites.

10th District Councilmember Brian O'Neill recently banned food trucks from the entirety of the Far Northeast in response to some people complaining to him about food trucks (or the people running them) operating in suburban-style shopping centers, and in the recent past, Council President Darrell Clarke caught some political blowback for trying to make the Temple area food trucks relocate elsewhere to park every single night, and cap the number of trucks that can operate on campus. And 3rd District Councilmember Jannie Blackwell tried, and then abandoned, a similar push to limit mobile food vendors around Drexel a few years ago. Other attacks on particular trucks tend to be much more successful when politicians don't go after large clusters of vendors, like in the Temple and Drexel examples.

And those are just the recent political moves in this area. The status quo policy in Philadelphia has long been extremely hostile to food trucks, banning them from operating curbside all throughout Center City outside of a few specific locations. That's the most lucrative possible place for food truck owners to vend, and we currently make almost the entire area off-limits to them for reasons that are unclear.

As the area people think of as Center City has continued to expand, so too have the regressive vending restrictions, which brings us to the most recent controversy reported yesterday by PlanPhilly.

At Broad and Spring Garden, Council President Darrell Clarke has quietly declared war on mobile food vendors who have been vending at the intersection for 20 years, but appear to be opposed by developer Bart Blatstein, who owns the Tower Place building, and is building a one-story retail space directly next to where the food vendors have historically located.

As Jake Blumgart reports, the vendors were forced to move across the street during construction of that building, where they reportedly lost about 30-40% of their business without the foot traffic from the Spring Garden subway entrance. Once the construction materials moved, they moved back, only to discover that Darrell Clarke had passed a bill in April without consulting them that prohibited mobile vending in their original spot.

Now, Clarke has introduced a companion bill, which is headed to committee next week, that will also prohibit any sidewalk food carts from vending in that space too.

No one wants to admit that Bart Blatstein was the one who requested the mobile vending ban here, but it seems pretty obvious that's what happened. Clarke spokesperson Joe Grace hints that vending bans tend to originate from constituent requests (which really gets at the ridiculous discretionary approval policies food vendors are up against.)

Clarke’s spokesperson, Joe Grace, argued that it is not unusual for sidewalk sales and street vending to be restricted even in dense areas like Spring Garden.

“In the past, it’s happened further out along Spring Garden Street and 17th Street, near the Community College,” wrote Grace in an email. “Usually when vending is restricted, it’s because of a constituent request, so that isn’t unusual either.”

Grace declined to say whether Tower Investment requested the restrictions on commerce outside their retail complex.

The lawyer for the food vendors, Matt Monroe, says that they intend to engage the council president in a dialogue to get the new bill stopped and their original legislative loss rolled back. Clarke stated that he is willing to discuss the issue with the vendors.

Clarke always loves to signal that he's out for the little guy, but here you have a genuinely clear-cut case with a relatively powerless group of food cart owners on one side, and a high-status high-rise owner on the other, and Clarke is actively involved in the situation, introducing bill after bill to push the little guy out. It's a very instructive case showing the big disconnect between what City Council says about their small business policy goals, and what they actually do in practice.