Several PA counties have now announced that they won’t begin counting mail ballots on Election Day, as they are allowed to under state law, and will instead start counting on Wednesday morning, on November 4th.

So far, six counties are doing this, according to a crowdsourced document by Pittsburgh area political analyst Ben Forstate, including Beaver, Butler, Cumberland, Greene, and Mercer.

These are all in areas of the state that went for President Trump in 2016, and while some are delaying their count for voting machine votes too (Cumberland), some are only delaying the count of mail-in ballots—a move that some election watchers are interpreting as a way to intentionally dramatize the “blue shift” effect on Election Day, where the results are expected to shift toward the Democrats as more mail ballots are counted, since more Democrats voted that way. 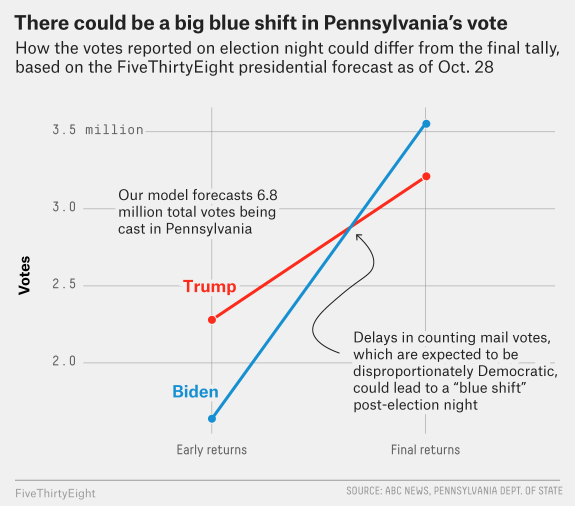 It’s also possible that counties are doing this for capacity reasons, at least in part. Philadelphia didn’t start counting until the day after the primary election, after all. But given the amount of open and public flirtation with election-stealing strategies from Republican elected officials and state party leaders this fall, it’s not exactly conspiratorial at this point to interpret these moves through that lens. What this seems to be building towards, if anything, is the scenario outlined in The Atlantic last month where a week of confusion would provide a window to the Republican-controlled state legislature to ignore the results of the election, and appoint pro-Trump electors to the Electoral College.

If the current polling averages for Pennsylvania hold through next Tuesday, Joe Biden could win by about 5 points, but it’s unclear at what point in the count this result would start to be forecast by the election models.

A lot is riding on how fast more Democratic-leaning regions of the state can count mail ballots, and the good news is that Philadelphia is going to be counting ballots very quickly, if all goes according to plan. And the City Commissioners in Philadelphia and other election officials in the southeast have said they’ll count ballots around the clock until they’re finished.

Aaron Moselle at WHYY broke down each stage of the ballot counting process, with some early estimates of how fast we can expect things to move.

Philadelphia, which spent roughly $5 million on all that machinery, is expecting to count more than 300,000 mail ballots starting at 7 a.m. on Election Day — nearly 30% of all registered voters in the city. More than a hundred employees will work each eight-hour shift until all ballots are counted.

Ballots are first mechanically sorted by ward, then division. That work is being done now so the vote counting can begin on Election Day.

Extracting is the second and slowest phase. The two-step process involves an employee feeding a stack of unopened ballots into a machine so it can slice open the mailing envelope. Then, the same employee feeds that stack through the machine again so it can slice open the secrecy envelope containing the voter’s actual ballot. Combined, the 22 high-speed extractors can open 12,000 ballots an hour.

In the most optimistic timeline, that means they could be done counting as soon as Wednesday, or possibly around Friday or Saturday on the later side of the public predictions out there.

Barring a situation where the ballots submitted on or before November 3rd are ordered not to be counted by the courts for some odd reason, Philadelphia’s mail ballot count is expected to be completed relatively quickly, and enough ballots should get counted within a few days for media organizations to be able to project the winner based on past turnout.

Have last-minute voting questions? Read our 2020 Voting FAQ, updated with everything you need to know heading into the weekend before Election Day