In Trimming the Abatement, Let's Not Create a Housing Slowdown

The Controller's office's report on the 10-year tax abatement has a lot of good insights into the economics of housing in Philadelphia in 2018, and raises some important questions about the different scenarios under discussion for reforming it.

One of the big unanswered questions about Philly's housing economy, which this report begins to answer, was whether our rents and home prices are now high enough that our high construction costs don't matter, or at least don't matter as much.

The old chestnut is that Philly has Baltimore's rents and New York City's construction costs, leaving a gap between what residents can afford to pay for housing, and what it costs to produce housing. The point of the abatement has always been to paper over the gap with a back-door construction subsidy.

The question the Controller's office tries to answer is whether after several years of growth, rents and home prices are now high enough to make this a moot issue—at least in some areas of the city. What they found was that only in about 8 zip codes in greater Center City and Chestnut Hill does the development math pencil out for build-to-sell or build-to-rent construction, with or without the abatement.

This chart from Section 4 is especially useful for visualizing the issue: 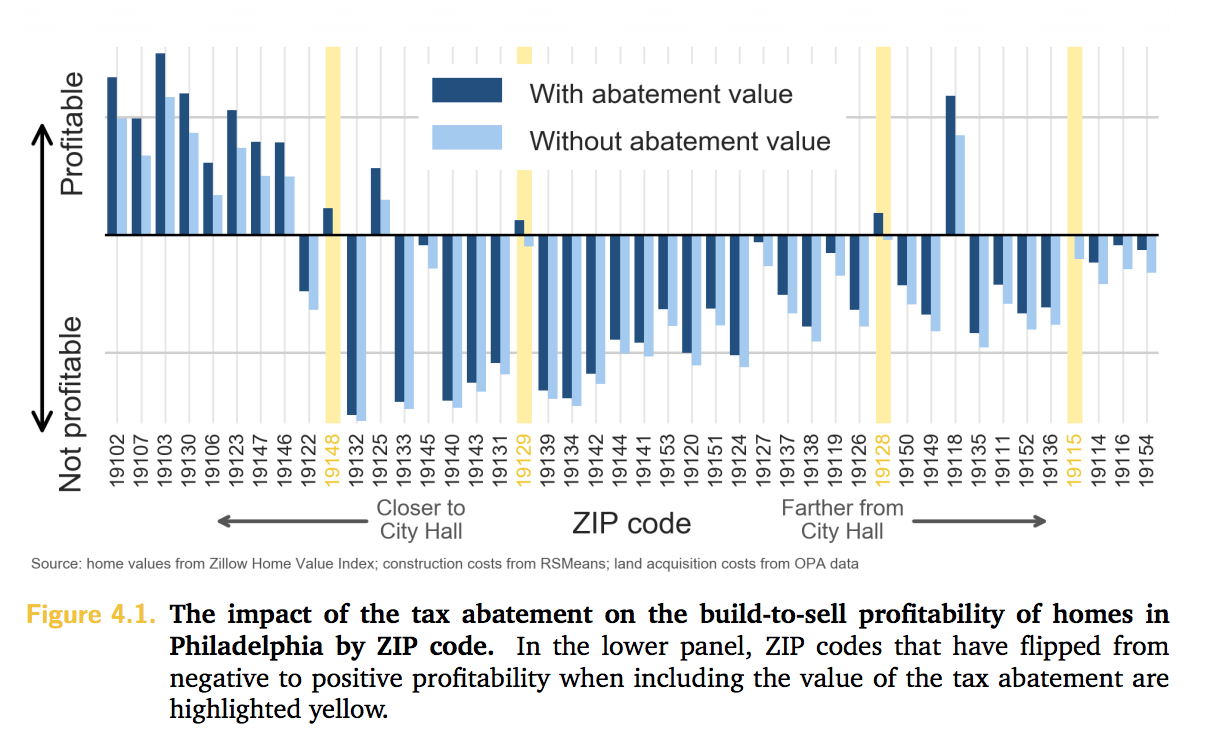 According to the Controller's model, there are four zip codes where the development math would flip from positive to negative:

The South Philly example is particularly noteworthy since land prices have been going crazy there for years, according to the Lindy Institute. Home prices there are climbing faster than anywhere else in the city, so as Council considers the various abatement reform proposals, they need to be extra careful not to choke off the housing supply in South Philly. 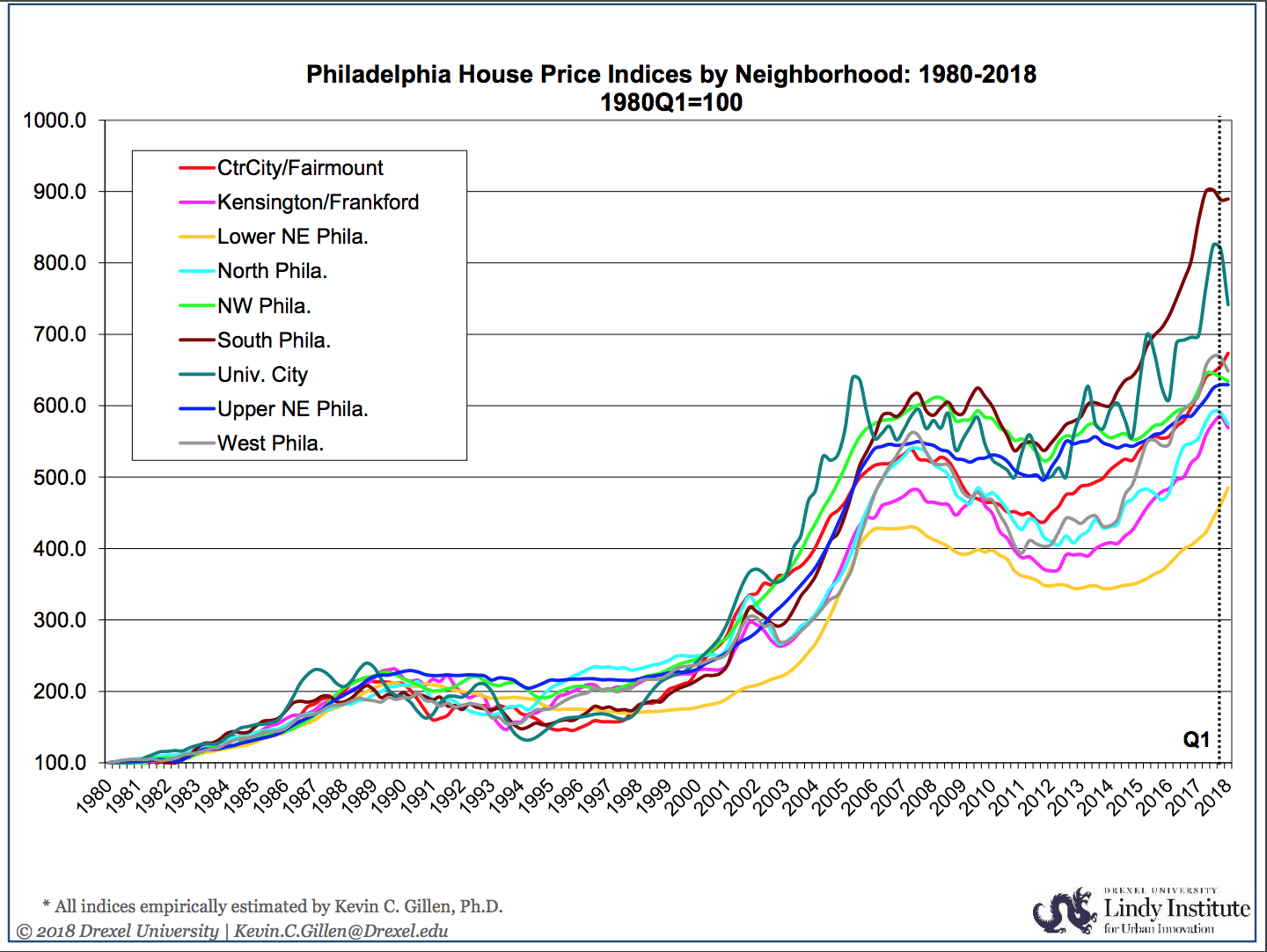 The other areas of interest are the zip codes where it's not currently profitable to build housing, but that are right on the cusp. A few of these examples illustrate the limits of using zip codes for this analysis, as they're pretty large areas—a fact the Controller report acknowledges—and everybody can think of some places in these neighborhoods that are seeing some more housing construction. That's definitely the case in South Kensington and Ludlow, which I am most acquainted with living in Fishtown.

But looking over this list, it's still pretty intuitive to anyone with a basic familiarity with Philly real estate that if City Council made some changes that slowed down housing construction in the city, these would be the places that would see some retrenchment. Interestingly, 19125 in Fishtown stays on the positive side of the line in the no-abatement scenario, but is the closest zip code to flipping to the not-profitable side—a good illustration of how, despite appearances, Philly's housing boom still pretty tenuous even in neighborhoods a reasonably short distance from Center City and University City jobs and amenities.

None of this is to argue that it's not the right time to look at ways of reforming the abatement, but any proposal to pare it back also needs a plan to fix the underlying issues it's been covering up. The abatement has served as a durable patch over the hole between what homes cost to build, and what residents can afford to pay. As the report shows, Philly's median rents are actually lower than Baltimore's, and our construction costs are still among the highest in the nation (though closer to LA's and Chicago's than New York City's.) The core problem the abatement was created to paper over still exists in all but about 10 zip codes.

The abatement has been the working compromise resolving the tension between two progressive goals: how to keep the cost of housing affordable to residents while also increasing the number of union construction projects paying high wages and benefits. The unfairness of that workaround is making that compromise less and less politically tenable in this moment in city politics, so the question now for responsible politicians is what alternative approach can bridge the gap if the abatement is pared back.

The first place Council should go looking for non-labor-related construction cost savings is in the area of zoning and permitting. Unfortunately, the report didn't dive too deeply into this topic this time, and only mentioned the word "zoning" once:

"Developers commonly cite several factors that disincentivize investment in Philadelphia real estate and place Philadelphia at a disadvantage compared to other major cities in which developers can choose to invest instead. Blight, crime, underperforming schools, cumbersome zoning and permitting and the higher tax burden of living in the city are chronic disadvantages that put downward pressure on demand for new housing in Philadelphia. Decreased demand, in turn, depresses market values for both the purchase and rental of properties within the city, including new development."

Local government has more control over some of these areas than others, and the one they have the most control over is zoning and permitting costs. There are non-trivial time and legal costs to getting projects approved that can be reduced by streamlining the process for zoning and permitting. Zoning also affects the feasibility of building housing through things like mandatory parking requirements, which add huge additional "construction costs" to projects. Evidence shows when parking requirements are reduced, builders build more housing and less parking, increasing the number of rent or mortgage payers contributing to the revenue side of a project. Further research should explore the economics of building mid-rise, mixed-use or other multifamily housing types with or without the abatement, as these weren't among the housing types studied in the report.

Zoning often is used to ban housing styles like apartments, triplexes, duplexes which may be more feasible to build in areas with lower land values. Anecdotally, some of the home builders who are building in some of the neighborhoods that could see retrenchment in an abatement-trimming scenario are currently making the numbers work by doing multifamily housing like triplexes in areas where the rents are low. Through zoning code changes, Council has the ability to increase the revenue yield on housing projects without spending any public dollars at all, simply by allowing more revenue-contributing units per parcel of land and reducing or eliminating parking requirements.

Some local research cited by Karen Black at an L+I discussion event we held last year shows streamlining the city's permit review process has the potential to cut project costs between 4-12%. And changes that Council is considering making to the plumbing code, like allowing less expensive PVC pipes to be used, could also bring down costs as much as 16% in larger multifamily projects, though building code updates start running into a different sort of labor politics.

The point is that in a world without the abatement, or a much-reduced one, all these political trade-offs and inefficiencies that several Mayors and Councils have been content to paper over with a construction subsidy really need to come to the fore of housing politics if we don't want to create a needless housing slowdown.