How Fast Will Philly’s Budget Recover From COVID? 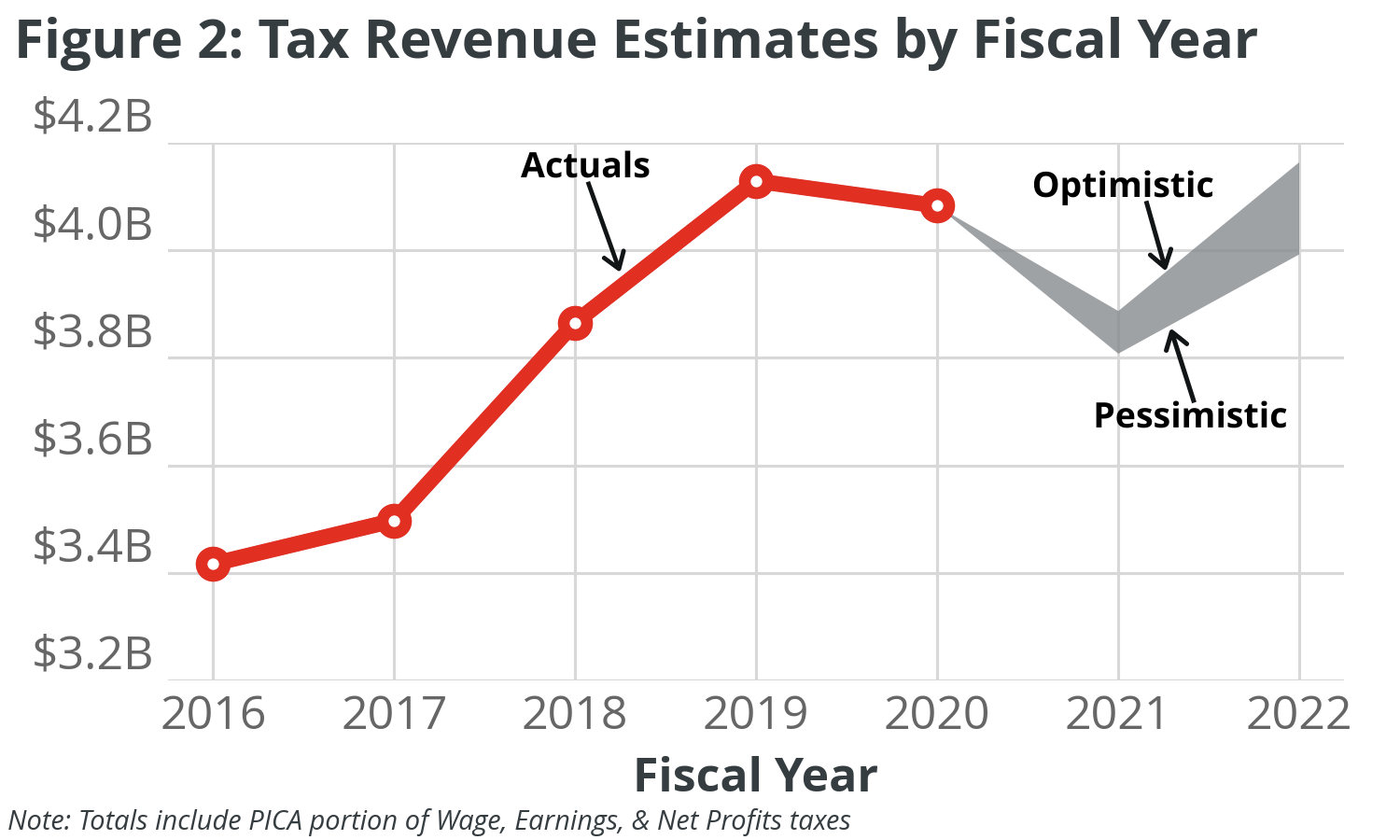 Philadelphia’s budget deficit was substantially resolved by the American Rescue Plan’s provisions for state and local aid, but what is likely to happen to local revenues next year and the year after as that funding starts to dissipate?

That’ll depend on the strength of the economic recovery in the city and region, the recovery in those specific industries that have been depressed due to government health restrictions, and how sticky certain pandemic-related economic trends turn out to be, like working from home and online shopping.

A new report out this week from Controller Rebecca Rhynhart looks at the current performance of different city tax sources and makes some budgetary projections through 2023, with optimistic and pessimistic scenarios. Both scenarios include the possibility of a more significant downshift in wage tax collections that could depress revenue into late 2022 or early 2023, with the pessimistic scenario assuming a more pronounced structural change.

Under the optimistic scenario, the Controller’s Office estimates that the City would have a combined tax revenue shortfall of $33M in fiscal years 2021 and 2022 relative to the City’s latest detailed budget projections released in February 2021. Under the pessimistic scenario, the City would face a combined tax revenue shortfall totaling $284M for FY21 and FY22. Both scenarios assume widespread vaccine distribution in the summer of 2021 that results in a substantial increase in economic activity beginning in the second quarter of FY22. However, the scenarios differ in the assumed pace of recovery, particularly for service sectors most impacted by the pandemic.

The optimistic scenario assumes a return to pre-COVID employment levels by mid-2023, while in the pessimistic scenario, this job recovery lasts until the end of calendar year 2023. However, in both scenarios the vast majority of the economic recovery occurs by the end of FY22. Both scenarios account for the effects of non-resident remote workers leaving the wage tax base during the pandemic. However, the full impact of this issue remains unclear as only some major employers have begun to withhold wage tax payments for non-resident remote employees. The work-from-home trend was already catching on nationally even before the pandemic, and as Upwork’s Adam Ozimek has found, there is evidence of a larger structural shift that’s likely to be accelerated by mass adoption of remote work in 2020. A recent report by Upwork projects that the share of the remote workforce will be double what it was pre-COVID by the year 2025. Nationally, about 41.8% of the American workforce is working fully remotely now, and Upwork’s surveys of hiring managers show employers expect about 26.7% of the workforce to be fully remote through the end of 2021.

In the Philadelphia region, if things were to play out roughly this way it would mean that Philly would still be taking in a significantly reduced amount of wage tax revenue—our largest tax source—through the end of 2021.

Many of the assumptions in the optimistic scenario seem to track better with observed reality, absent any major negative surprises, and one can imagine several areas where it may be underrating the strength of different factors powering the economic recovery, like the continued dovish stance of the Federal Reserve, and the size of the $1.9 trillion American Rescue Plan, which has some economists feeling a little queasy about the prospect of some higher short-run inflation. Federal policymakers are determined to run the economy hot, which on balance is good, but there’s some debate about whether it could get a little too hot for a while, and if that were the case, this would be good news for Philadelphia’s unemployment rate and tax revenues.

The news for Philly isn't all good, however. The Controller's optimistic scenario projects total tax revenues at 101% of baseline by FY23. The baseline they’re going off of, however, is the City's revenue levels in the four quarters preceding the pandemic—not the projected revenue levels for 2023. That means there will be a very real output gap between where we thought our 2023 revenues would be two years ago and where they are likely to end up.

That's a problem in its own right, and one that is magnified by Philadelphia's fundamentals going into the pandemic. Although the city was hitting record revenue levels in 2019, it never fully recovered from the 2008 Great Recession. In all likelihood, we're going to have an incomplete recovery on top of an incomplete recovery, with 2019 revenue amounts to pay 2023 bills.

One aspect to watch is going to be the policy response from the city and employers to the long-term shift to hybrid work among non-resident remote workers. Since the start of the pandemic, suburban commuters who typically work in the city but are required to work from home can apply for a Wage Tax rebate. That’s one of the things hurting wage tax revenues. As workplaces start to open up, though, and workers are permitted by the City and their employers to return to their offices, eligibility for the rebate will disappear.

Employers project that a substantial number of their office workers won't return to five days a week in the office even when they're allowed to do so; instead, they'll do something like a 3+2 schedule, where they're at home two days a week and in the office for three.

Many of those non-resident workers are going to think they shouldn't pay wage tax for the days that they aren't in Philadelphia, and will advocate for their employers to do something about that. In response, the City will say that they wouldn't grant a wage tax rebate to someone who works from the shore a couple weeks in the summer, and working from home by choice when the option is there to go to the office five days a week is no different.

There’s some danger for Philly if this type of thing results in more city-based employers trying to resolve the issue by shifting facilities to suburban locations, and accelerating harmful job sprawl, but it’s too early to know how everyone will react yet.

The other significance of these projections is what they could mean for the political environment heading into the 2023 elections and the issues that are high-salience that year. The optimistic scenario places the budget recovery in 2022, and the pessimistic one foretells some budget troubles heading into 2023. In early 2023 are we going to have an electorate that’s more on-edge from years of budget cuts and a slow recovery? Or are we going to see most services restored, and an electorate that’s feeling optimistic like city government is on the right track?