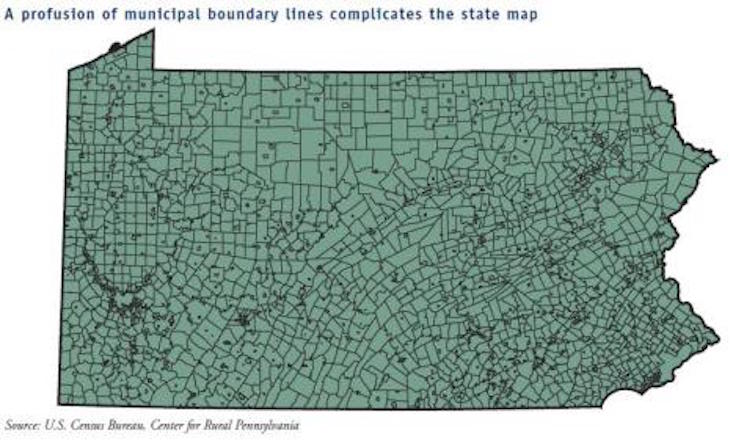 Philadelphia, as the only city-county in the Commonwealth, manages to avoid the worst of this with a large tax base covering a big geographic area which allows us to fund some pretty large and specialized departments and services. In addition to some of the basics like police and fire protection, we have a Department of Public Health, a professionally-staffed Planning Commission, a Commerce Department, and other agencies that would be unheard-of in most of the state.

Moving more local services to the County level across the state would allow for more comprehensive and well-funded local services, but Pennsylvania lacks a functional process or set of incentives to put more counties on this path. Philadelphia, which consolidated its tiny municipalities into a large county government in the 1850's, is far from perfect, but it's in a much better position to raise revenue and do local services and fiscal redistribution than anywhere else in the state.

But in some important areas—street cleaning, sidewalk maintenance, waste management, and park and rec center stewardship, to name a few—Philadelphia isn't making the most of its powerful-for-Pennsylvania county-sized government, and still manages to replicate some of the worst pathologies of hyper-local governance in the rest of the state in important ways, even though we have the tax base and the governing institutions in place to more efficiently fund universal services that everyone gets.

Some things that ought to be part of the basket of core citywide services are instead conceptualized as more limited nice-to-haves undertaken only by business improvement districts, community development corporations, or local non-profits in relatively wealthy areas, or worse, left up to individual efforts alone.

Inga Saffron makes this point well in setting up her column about the Callowhill/Chinatown BID controversy:

Philadelphia is known as a city of neighborhoods. But it may be even more accurate to call it a city of neighborhood organizations. Block associations. Civic groups. Friends groups. Ward committees. Special services districts. Community Development Corporations. Their numbers have exploded in recent years for the simple reason that City Hall is unable to deliver all the services that neighborhoods want and deserve. When we talk about local government in Philadelphia, we really, really mean local.

It’s annoying. It’s inefficient. It frequently leads to stark inequalities and gives license to Philadelphia’s famous provincialism. In a perfect world, Philadelphia’s government would be a well-run, well-funded machine, and every neighborhood would get its due. Everybody’s streets would be swept regularly. Parks would be meticulously manicured and graffiti scrubbed away the moment it appeared. The city would make sure that vacant properties were sealed, and every building site was safe. [...]

The other complaint about BIDs is that they institutionalize inequality by dividing the city into neighborhoods with street cleaning and those without. But when high-income neighborhoods pay directly for their amenities, that makes more city money available for less affluent ones. City Council recently added $2 million to the city’s street-sweeping fund. The money will be spent on commercial corridors in areas without BIDs, like 52nd Street in West Philadelphia.

In leaving some core municipal services up to local associations, like street cleaning, the City is recreating the same problematic system that fragmented counties have, where richer areas are able to afford a higher level of services than poorer areas, which in some cases are right next door across an arbitrary taxing boundary.

And in most of these BIDs, the services aren't actually delivered neighborhood-wide—just on the main commercial corridors or the streets that can afford to be net payers. For example, even if my neighborhood in Fishtown is successful in creating a new BID, only Frankford Ave, Girard, and Front Streets will get any street cleaning service. The City will then consider us all taken care of at that point, but in reality the vast bulk of the neighborhood will still have no street cleaning services at all.

Similarly, leaving so much of the funding for parks and schools up to local volunteer groups, instead of adequately funding them from the citywide tax base, sets up big disparities in service levels between school catchments and public spaces based on which communities have more neighbors with disposable income to contribute.

Maybe it really would be too expensive to raise an adequate amount of money to provide a high level of services to everyone through local revenue alone, for all the different services people want. But it's not always about the funding—sometimes politics determine the difference between what's a universal service and what's left to individual effort. In the case of street cleaning, sweeping the whole city every few weeks would cost a pretty minor sum—less than $5 million annually if we did the mechanical sweeping and alternate-side parking version—and it would only require only a small upfront capital expenditure to purchase the equipment.

To achieve a more equal balance of public services for everybody, more of the things now considered the job of BIDs need to be reconceptualized—and funded—as part of the basic package of citywide services that everyone receives.